‘Kalipso’ is a new cultivar of plum obtained in a plum breeding program at the Research Institute of Pomology and Floriculture (now Research Institute of Horticulture) in Skierniewice, Poland, by Tadeusz Jakubowski and Edward Żurawicz. ‘Kalipso’ is a prolific cultivar. In the central part of Poland, ‘Kalipso’ plums ripen in the last 10 d of July are very tasty, typically dessert in character, but also suitable for processing. Fruit is not very prone to dropping and remain on the tree after reaching harvest maturity. The tree grows moderately vigorously and comes early into bearing fruit. ‘Kalipso’ is tolerant to Plum pox virus (PPV), a causal agent of sharka (plum pox) disease. With standard orchard protection, the flowers, shoots, and fruit are unaffected by brown rot [Monilinia laxa (Aderh. et Ruth.) Honey] and [Monilinia fructigena (Aderh. et Ruth.) Honey]. To obtain abundant fruiting, ‘Kalipso’ trees should be grown in the presence of pollinating cultivars (pollinizers), such as ‘Jojo’, ‘Węgierka Dąbrowicka’, ‘Čačanska Rana’, or ‘Emper’.

Prunus domestica is an economically important fruit crop species in Poland. In the last 10 years, the annual production of plums in Poland has amounted to about 100,000 t (FAOSTAT, 2013; GUS, 2014). In terms of the overall fruit production in Poland, plums are in sixth place—behind apples, sour cherries, strawberries, currants, and red raspberries. The program of breeding new cultivars of plum at the Research Institute of Pomology began in 1954. This program developed the ‘Węgierka Dąbrowicka’ plum and three clones of the ‘Common Prune’, which were named ‘Nectavit’, ‘Promis’, and ‘Tolar’ (Jakubowski, 1998; Rozpara et al., 1998). At present, all these cultivars are grown on a commercial scale throughout the country. In 1991, the Research Institute of Pomology and Floriculture launched a new program of breeding stone fruit trees (plum, sour cherry, peach, and apricot), the aim of which has been to derive new cultivars with different ripening times and high fruit quality, as well as being tolerant to disease, particularly to PPV (Jakubowski, 1998). Recently, one of the main directions of this program has also been to obtain cultivars tolerant to abiotic stresses, particularly cultivars that have low susceptibility to winter and spring subzero temperatures (Szymajda et al., 2013; Szymajda and Żurawicz, 2014). The breeding program has already produced three cultivars of plum—‘Kalipso’, ‘Emper’, and ‘Polinka’, which are currently being introduced into commercial fruit production in Poland.

‘Kalipso’ was obtained by crossing ‘Opal’ and ‘Čačanska Lepotica’ (Fig. 1). The crossing of the parental forms was performed in 1994, and the selection of a population of 126 hybrid seedlings was performed in 2000. ‘Opal’ is tolerant and ‘Čačanska Lepotica’ is weakly sensitive/slightly tolerant to PPV (Neumüller, 2011) and both are tolerant to brown rot (Vitanova et al., 2004). ‘Opal’ had been derived at the Horticultural Research Station in Alnarp, Sweden, by crossing ‘Early Favorite’—the English cultivars with ‘Oullins Gauge’—the French cultivar (Łucka, 1994). ‘Opal’ was introduced into commercial cultivation in 1925. It is an early ripening cultivar, high yielding, and with excellent fruit flavor, but the trees of this variety often set an excessive number of fruit, which results in small fruit at harvest, reduced fruit flavor, and biennial bearing (Grzyb and Rozpara, 2007). ‘Opal’ is listed in the Polish Register of Varieties, and is grown in Polish orchards. ‘Čačanska Lepotica’ was obtained in 1961 in the former Yugoslavia, at the Fruit Institute in Čačak, now in Serbia. It was derived by crossing ‘Stanley’—as the maternal form, with ‘Ruth Gerstetter’—as the paternal form (Decroocq et al., 2004). ‘Stanley’ had been obtained in the United States at the Cornell–Geneva Station in 1913, by crossing ‘Prune d’Agen’, the French cultivar, with ‘Grand Duke’, the English cultivar, whereas ‘Ruth Gerstetter’ was obtained in Germany in 1920 by crossing ‘Bonne de Bry’, the French cultivar, with ‘Czar’, the English cultivar (Grzyb and Rozpara, 2007). ‘Čačanska Lepotica’ is listed in the Polish Register of Varieties, and is now one of the most widely grown cultivars of plum in this country. The cultivar bears fruit abundantly and has low susceptibility to plum diseases, but its trees are only moderately resistant to frost, and the flavor of its fruit is not always acceptable to consumers.

‘Kalipso’ was tested under the designation ‘SL-01’. The experiment was established in the autumn of 2008, in the Experimental Orchard in Dąbrowice (central Poland, 145 m above sea level, lat. 51°54′ N, long. 20°06′ E). The evaluation of the growth and yielding of ‘Kalipso’ trees was conducted in the years 2011–15. The standard cultivars in the experiment were ‘Herman’, ‘Čačanska Rana’, ‘Opal’, and ‘Čačanska Lepotica’, which are the early ripening cultivars and are commonly grown in Poland. The nursery material needed to establish the experiment had been produced in Mar. 2008 by winter grafting on two rootstocks—Myrobalan seedlings (Prunus cerasifera Ehrh.) and Wangenheim Prune seedlings (P. domestica). The scions and rootstocks used for the grafting were free of viral diseases. In April, the obtaining grafts were planted in 5-L containers filled with compost soil and placed in high plastic tunnel. The resulting 7-month-old trees were planted in a randomized block design in triplicate, with three trees per plot, spaced at 2 × 4 m (1250 trees/ha).

‘Kalipso’ is a cultivar with a moderately early flowering time. In the central part of Poland, its trees began to blossom around 24 Apr., which was at much the same time as the trees of the standards—‘Opal’ and ‘Čačanska Rana’, and about 2 d before those of ‘Herman’ and ‘Čačanska Lepotica’. The intensity of flowering of ‘Kalipso’ trees was higher than in ‘Opal’ and similar to or slightly lower than in ‘Herman’, ‘Čačanska Rana’, and ‘Čačanska Lepotica’. The flowering of ‘Kalipso’ trees was a little more intense on Wangenheim Prune than on Myrobalan seedling rootstocks (Table 1). 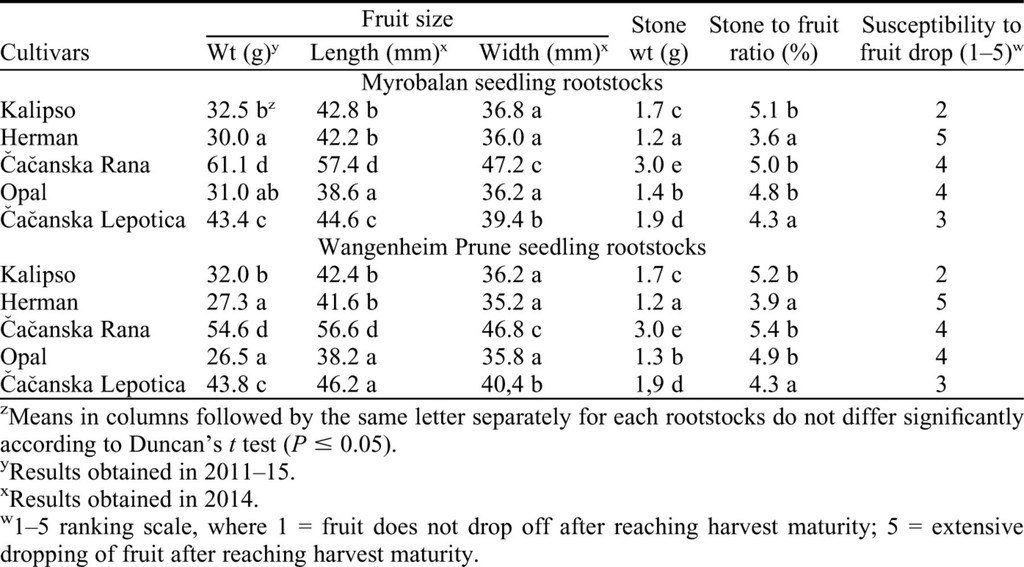 On both rootstocks used, the trees of ‘Kalipso’ grew significantly less vigorously than those of the standards—‘Herman’, ‘Čačanska Rana’, and ‘Opal’, but as vigorously as those of ‘Čačanska Lepotica’ (Table 2). On both rootstocks, the tree formed an upright crown with fairly closely spaced shoots. The shoots were of moderate thickness, relatively long, free of thorns, with a smooth maroon-brown surface. The leaves were medium sized, with a broad oval shape, without gloss. ‘Kalipso’ trees came into fruiting in the 2nd or 3rd year after planting and were very productive. They bore fruit on spurs, 1- and 2-year-old shoots, but the main part of the crop was produced on 2-year-old shoots and spurs formed on 3-year-old and older branches (Fig. 3).

A major advantage of the ‘Kalipso’ plum is its low susceptibility to PPV—the causal agent of the sharka disease, which in economic terms is a very serious disease of plum trees. During the study, no visual symptoms of sharka were found on the leaves or fruit of any of the trees in the experiment (Table 5). However, the presence of the virus was detected with the double antibody sandwich enzyme-linked immunosorbent assay technique (Clark and Adams, 1977) in one tree growing on the Myrobalan seedling rootstock (data not shown), but even in that tree there was no decline in the quality of the fruit, with very few fruit dropping after reaching harvest maturity. By contrast, some trees of the standards—‘Herman’, ‘Čačanska Rana’, and ‘Čačanska Lepotica’ were affected by PPV. The presence of the sharka virus in only one ‘Kalipso’ tree, despite the high infection pressure of the pathogen in the environment of these trees, indicates low susceptibility of this cultivar to sharka. Generally, the absence of visual symptoms, or only minor symptoms of the sharka disease on the leaves and fruit of plum trees is evidence of the tolerance of plum genotypes to the presence of the PPV on the tree (Neumüller, 2011). The sharka disease in Poland causes considerable losses in the form of a significant reduction in fruit yield and deterioration in the quality of the fruit produced. For that reason, the low susceptibility of ‘Kalipso’ plum trees to this disease is a major advantage of this cultivar.

Susceptibility to Plum pox virus (sharka) of the variety ‘Kalipso’ compared with the standard cultivars in terms of the symptoms on the leaves and fruit (% of affected trees in relation to the total number of trees assessed on both rootstocks) (Dąbrowice, 2015).

‘Kalipso’ is a cultivar with high resistance of trees to winter frosts. The occurrence of large winter temperature drops, even to −28.1 °C (26 Jan. 2010), −22.3 °C (22 Feb. 2011), and −23.3 °C (3–4 Feb. 2012) (Table 6), did not cause any visible frost injuries on the trees. There were only sporadic instances of damaged flower buds, but this did not have any noticeable impact on the intensity of flowering and fruiting of the trees. During the course of the experiment, light spring frosts also occurred toward the end of the tree flowering stage, i.e., on 3–4 May 2011 the temperature dropped to −1.1 and −1.5 °C, and on 3–5 May 2014 the temperature dropped to −0.5, −1.1, and −1.3 °C, respectively. The subsequent good setting of fruit and production of abundant crops in spite of the subzero temperatures during flowering also confirms sufficient resistance of the flowers of the variety ‘Kalipso’ to spring frosts.

Minimum winter temperatures and spring frosts at a height of 1.8 m and the flowering start date of ‘Kalipso’ trees (Dąbrowice, 2009–15).

‘Kalipso’ has been entered on the Polish National List of Fruit Plant Varieties by the Polish Research Center for Cultivar Testing (in Polish: Centralny Ośrodek Badania Odmian Roślin Uprawnych) and is protected by plant breeders’ rights in Poland until 2 Mar. 2042. Certified plant material of this cultivar can be purchased from the Center for Elite Nursery Stock (in Polish: Ośrodek Elitarnego Materiału Szkółkarskiego OEMS) in Prusy. Nursery producers interested in the multiplication of the cultivar Kalipso and sale of its nursery stock should contact the OEMS via e-mail: oems_prusy@poczta.onet.pl.

Longitudinal section of the ‘Kalipso’ plum.

Fruiting of the plum variety ‘Kalipso’. 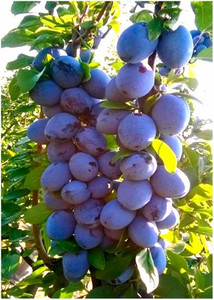