Dormancy is an adaptation of perennial plants to cease growth in response to extreme environmental conditions (Rohde and Bhalerao, 2007). Dormancy is induced by diverse factors in different plants (Vegis, 1964), whereas dormancy termination is usually influenced by chilling in winter (Fuchigami et al., 1982; Perry, 1971; Wareing, 1956). Temperature and duration of chilling are key components of satisfying chilling requirements which are critical to promote vegetative growth and budbreak for perennial plants in the subsequent year (Perry, 1971). Temperatures near 5 °C are required to satisfy the chilling requirement of perennial plants (Perry, 1971). However, the duration requirement of chilling varies considerably between and within species (Alburquerque et al., 2008; Brundell, 1975; Egea et al., 2003; Ruiz et al., 2007; Wall et al., 2008). The Richardson’s CU is often used to determine chilling requirement (Richardson et al., 1974). For example, the chilling requirements ranged from 266 to 996 CU among almond cultivars (Egea et al., 2003) and ranged from 800 to 1200 CU among apricot cultivars (Ruiz et al., 2007). Negative effects that are caused by insufficient or exceeded chill accumulation could result in reduction of budbreak or earlier flowering, which threaten the cultivation and commercialization of the perennial crop. Thus, finding the chilling requirements of plants is vital for the basic understanding of dormancy and practical application of dormancy release or bloom delay techniques (Naor et al., 2003).

The plant material used in this study comprised nine kiwifruit cultivars with three ploidy levels including the diploids ‘Jinyu’ (originate from Henan province), ‘Donghong’ (Henan), and ‘Wuzhi-7’ (Jiangxi); the tetraploids ‘Jintao’ (Jiangxi), ‘Jinxia’ (Jiangxi), and ‘H-15’ (Hunan); and the hexaploids ‘Jinkui’ (Hubei), ‘Chuanmi-1’ (Sichuan), and ‘Bruno’ (New Zealand). The ploidies of these cultivars have been determined by flow cytometry experiments (Huang, 2014). The former five cultivars belong to Actinidia chinensis, and the remaining cultivars belong to Actinidia deliciosa. All these kiwifruit cultivars were cultivated at the National Actinidia Germplasm Repository (NAGR) at the Wuhan Botanical Garden, Chinese Academy of Science.

The experiments were conducted in 2014 and 2015 in the NAGR orchard. Hourly temperatures were collected from September to March by an electronic thermohygrograph (Zoglab Model DSR-TH; Zoglab, Hangzhou, China). The starting date for chilling accumulation was considered when “positive chill-units begin to accumulate just after the day in the autumn when the largest negative accumulation is experienced” (Erez et al., 1979; Richardson et al., 1974). For the Utah Model, the largest negative accumulation of CU was detected on 2 Nov. (data not shown), hence we began calculating CU on 3 Nov. For the Dynamic Model and CH Model, we began calculating CP and CH on 1 Sept., respectively (Zhang and Taylor, 2011). For each kiwifruit cultivar, 30 canes (lengths: 30–40 cm, diameter: 5 mm) with about five buds were collected on 15 Dec., 29 Dec., 6 Jan., 23 Jan., and 8 Feb., respectively. These 30 canes were then evenly spaced in a greenhouse in triplicate at 22 °C with natural sunlight and 65% relative humidity and maintained for several weeks. Shoot counts that emerged from buds were recorded daily. Floral buds were also counted, as well as the stage of development of each flower, including full bloom, petal fall, and senescence. Once a bud developed into a shoot with flowers, it was regarded as a floral bud. Data were collected until leaves appeared chlorotic or necrotic and floral parts stopped developing or had abscised (Wall et al., 2008).

Statistical analysis was performed using SPSS® Statistics V21 (Chicago, IL). All data are reported as mean values with standard deviations. Differences among diploid, tetraploid, and hexaploid were tested by using one-factor analysis of variance (ANOVA). When ANOVA was significant, the means were discriminated using the Tukey’s test for the post hoc pairwise comparisons. The correlation between chilling requirement and ploidy levels was estimated by the use of the Pearson correlation coefficient.

Chill accumulation under field conditions in Wuhan, China (2014–15), according to the dynamic model, Utah model, and chilling hours (CH) model.

The percentages of vegetative budbreak and floral emergence for canes with different chilling accumulations in nine kiwifruit cultivars.

Association analysis of ploidy levels with chilling requirements in kiwifruit.

In our field conditions, the correlation coefficient between portions (Dynamic model) and CU (Utah model) was higher than that between portions and CH (CH model) and between CU and CH (data not shown). Similarly, in estimating chilling requirements, the correlation between the Dynamic and Utah models (r = 0.99) is very high, which is similar to that reported in previous studies (Erez and Fishman, 1998; Ruiz et al., 2007). Hence, both the Dynamic and Utah models are suitable for estimating chilling requirements for kiwifruit cultivars in Wuhan. The correlations between the CH and Dynamic models (r = 0.97) were also quite high, as well as between the CH and Utah models (r = 0.95), indicating that the CH model could be a useful and reasonable method for growers.

The relationship of ploidy with chilling requirements for vegetative budbreak (A) and floral emergence (B). Significance of the regression coefficient was determined at P < 0.05. Each data point represents the mean value of a cultivar. 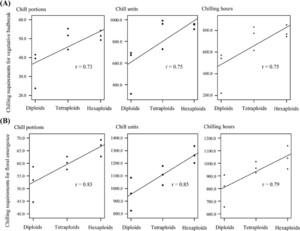