Pedigree of ‘Flavorfest’ strawberry, released in Dec. 2012, by the USDA-ARS, from the Beltsville Agricultural Research Center, Beltsville, MD. Seed parents are represented above pollen parents.

‘Flavorfest’ fruiting season compared with other cultivars grown at the USDA-ARS Beltsville Research Center, Beltsville, MD, in 2011, a year representative of the season relationships between these cultivars. Plots were harvested twice weekly, and the harvests combined for each week. Yields were adjusted for plant stands and reported as g/plant each week. ‘Earliglow’ is an early-season cultivar, ‘Flavorfest’ and ‘Chandler’ are midseason cultivars, ‘Allstar’ is a midlate season cultivar, and ‘Ovation’ is a late-season cultivar. 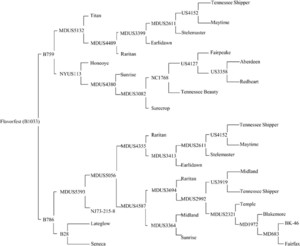 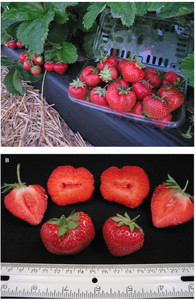