Search for other papers by Liangxi Ou in
Google ScholarClose

Litchi (Litchi chinensis Sonn.) originated in southern China and northern Vietnam but has now spread to countries with subtropical climates (Menzel and Waite, 2005). Litchi is not only an important fruit in China, India, Vietnam, and Thailand but is also cultivated in Australia, South Africa, the United States, and South America. A major factor affecting the production of this subtropical fruit in many countries is its low yield (Yu et al., 2015). The trees may fail to flower some seasons or fail to set and carry a reasonable crop (Menzel, 2001). Aizen and Harder (2007) considered pollen limitation as the combined effect of quantity and quality limitation, indicating that quantity limitation is less frequent than was inferred from pollen supplementation experiments. Moreover, their results suggested that an expanded broad perspective that recognized the fecundity consequences of pollination with poor-quality pollen would improve the ecological understanding of pollen limitation.

The litchi flower is a type of unisexual flower for which self-pollination is not common (Xiang et al., 2001). Litchi is a gynaecandrous and monoecious plant, yet gynaecandrous pollination or geitonogamy does not commonly occur because male and female flowers do not appear simultaneously. Moreover, litchi is a typical cross-pollinated plant; the productive cultivars (except very few varieties or individual plants with natural parthenocarpic ability) do not bear fruit unless they are pollinated and fertilized. However, the viability of pollen usually affects pollination, fertilization, and fruit set rate, so it is necessary to study the characteristics of litchi pollen for cultivation and breeding.

For entomophilous flowers, the amount of pollen grains deposited on the stigma depends on the number of pollinator visits received by a floret during a certain period (visit rate) and the proportion of viable pollen in the pollen loads carried by the pollinators (Dafni et al., 2005). Litchi is a typical out-pollinated plant, and fruit set can occur only if pollen from male flowers is transferred to the stigma of the female flowers (Stern and Gazit, 1996). Insufficient pollination is an important factor responsible for low yields in litchi. Litchi pollination requires large amounts of pollen grains during the flowering period. However, not much information is available about the relative levels of the quality and number of pollen grains among different litchi cultivars. Moreover, a better understanding of the relationship between the number and quality of pollen grains among cultivars may help in choosing cultivars for litchi orchards to improve the fruit set.

The study concerning the characteristics of litchi pollen has drawn increasing attention in recent years. Previous studies have indicated that there is a great difference in pollen viability among varieties (Ou et al., 2010). Moreover, the same variety may show distinctly different pollen viabilities in different years; flowering may be advanced or delayed significantly by weather at the development stage of anthers in the same year (Xiang et al., 1994), and flowering may also be affected by air temperature at the stage of germination (Xu et al., 1982). Litchi pollen germination rate and pollen amount have been reported in many studies (Jiang et al., 2012; Ou et al., 2010; Stern and Gazit 1998; Xiang et al., 2000); however, systematic studies on the change of pollen germination rate and pollen amount from variety to variety at different flowering stages are still lacking. In this study, the changes in the germination rate of pollen at different development stages were studied. In 2009 and 2010, the viability and number of pollen grains per anther were investigated in 65 litchi cultivars. More precise information is needed in several major areas, including the selection of a parent, the collection of pollen, and the determination of hybridization time in the crossbreeding of litchi. The objective of this study was to evaluate the number of pollen grains per anther and the pollen germination capacity of different cultivars of litchi trees.

The difference of the pollen germination in litchi male flower types and stages.

Number of pollen grains per anther in 65 litchi cultivars. 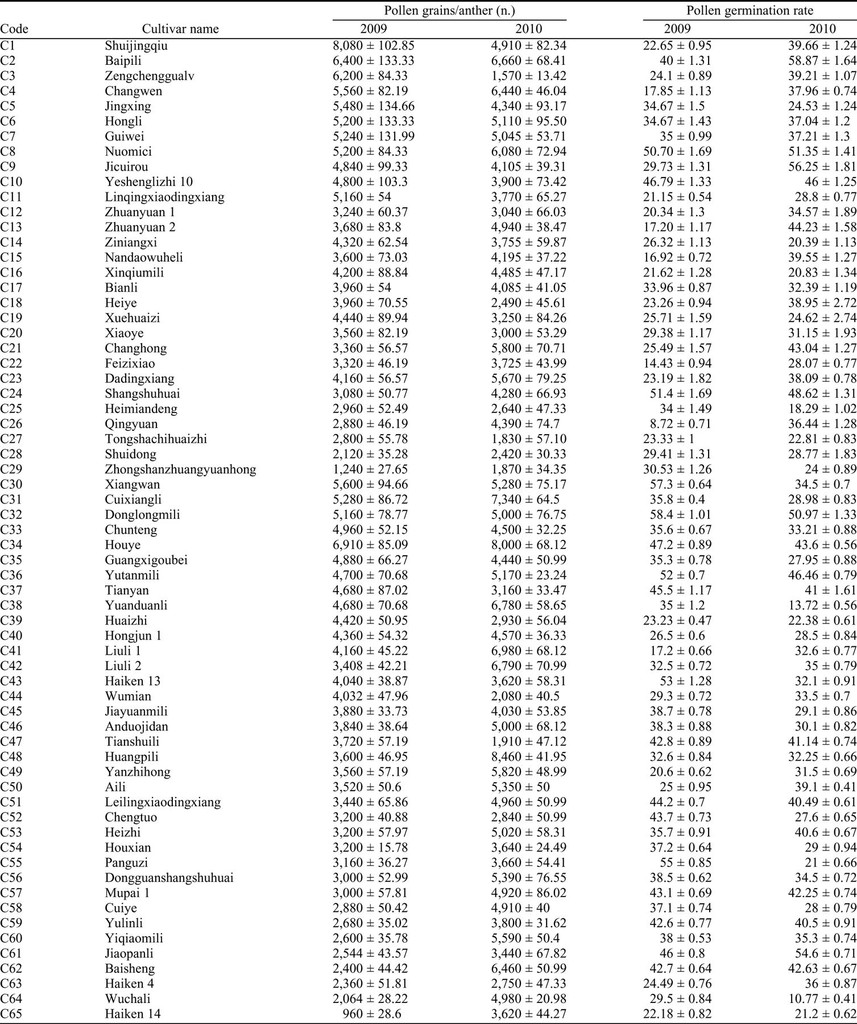 Fifty anthers were collected from the filament extends of fully male flowers during the second wave of blooming. The anthers were placed in 2-mL centrifuge tubes and then dried at 35 °C with an air-blowing electric dryer for 24 h until the anthers were completely dry. The tubes were vibrated to release the pollen from the anthers. About 2 mL of distilled water was added to each tube. The centrifuge tube was then placed in an ultrasonic oscillator for 15 min and vortexed for 5 min to evenly suspend the pollen in water. Pollen quantity was calculated by the blood count method. Briefly, a drop of the suspension was placed in a hemocyte counting plate (XB-K-25) to count the number of pollen under a microscope. The number of pollen in a large square (1.0 × 1.0 × 0.1 mm in size with 400 small squares) was counted. Each treatment was performed in triplicates. The quantity of pollen in one anther was computed as the quantity of pollen/one anther = (2 × n/10−4)/50; where n represents the mean number of pollen in the large square, 2 represents 2 mL of suspension, and 10−4 represents the volume of the large square, and 50 represents the number of anthers.

The litchi has three types of flowers: Male 1 (M1), Male 2 (M2), and Female (F). The three types coming into anthesis in three distinct waves: the first is the male (M1) bloom, the second is the female bloom, and the third is the male bloom (M2). Male flower development of litchi was defined in four stages (Fig. 1). In the first stage, the anther extended just beyond the receptacle, and the filaments were not observed. In the second stage, the filament is extended to half of its overall length. In the third stage, the filament extends fully, but the anther does not dehisce, and in the last stage, the filament extends fully, and the anther dehisces. Anthers were collected from each of the four stages during the first and second wave of blooming for ‘Sanyuehong’, ‘Shuidong’, ‘Zhuangyuanhong’, and ‘Songxiang’. Anthers were collected from the third stage during the second wave of blooming for the 65 identification varieties. Pollen grains were collected, dehydrated, and scattered on 1% (w/v) solid agar, which was supplemented with 3% sucrose (w/v) in petri dishes. The growth of the pollen tubes was observed under a light microscope after incubation at 30 °C for 3 h (Jiang et al., 2012). Pollen germination was observed under a microscope (40×). Twenty different fields of vision, each with at least 30 grains, were examined per treatment. Pollen grains were considered to have germinated when the pollen tube was at least as long as the diameter of the pollen grain.

Data obtained were analyzed by analysis of variance (ANOVA). The percentages of viable pollen that were below 30% or over 70% were transformed to the Arcsin P 0.5 for ANOVA analysis. The statistical significance of the treatments was tested using Tukey’s test at 5% probability. Statistical analyses were performed using the SPSS 19.0 statistical software. The hierarchical cluster was constructed by the Ward Method clustering using the squared Euclidean distance as the distance metric. The pollen quantity and germination rate of different litchi cultivars were analyzed as variables in hierarchical cluster.

The difference in pollen germination in different types of litchi male flowers and stages.

Sixty-five litchi cultivars were used as test plants to determine the pollen quantity in 2009 and 2010. A difference was observed among cultivars. The number of pollen grains per anther ranged between 1555 (‘Zhongshanzhuangyuanhong’) and 7455 (‘Houye’) (Table 2). The number of pollen grains varied greater than 2000 among the 2 years in 15 cultivars. The cultivars included ‘Shuijingqiu’, ‘Zengchenggualv’, ‘Changhong’, ‘Cuixiangli’, ‘Yuanduanli’, ‘Liuli 1’, ‘Liuli 2’, ‘Huangpili’, ‘Yanzhihong’, ‘Dongguanshangshuhuai’, ‘Cuiye’, ‘Yiqiaomili’, ‘Baisheng’, ‘Wuchali’, and ‘Haiken 14’, and the quantity values were higher in the 2010 year with respect to the 2009 year in 13 varieties.

Classification of litchi cultivars based on pollen quantity and pollen germination rate.

Classification of the pollen quantity and germination rate of different litchi cultivars.

Pollen does not develop synchronously in the same anther in litchi. When the male filament extends to half of its overall length, the anther has not yet achieved maturity. As the male flowers develop, the amount of mature pollen increases constantly in the anther. The amount of mature pollen reaches its maximum when the anther becomes fully mature. More pollen is needed in the crossbreeding of litchi. Theoretically, the fully mature anthers that are not dehiscent should be collected. In practice, because anthers develop nonsynchronously in the same tassel, it would be inefficient to collect fully mature anthers from every tassel. Thus, to ensure the maturity of the pollen and improve the collection efficiency of the pollen, anthers should be collected at the second and third development stages of male flowers every time.

Pollen collection is difficult but it is important. Adjusting the amount of pollen in artificial cross breeding in litchi based on the viability of the litchi variety conserves the amount of pollen. The differences among cultivars and between years in pollen viability, intended as flower quality, might be attributed to both physiological and environmental factors, but a genetic influence might play a significant role (Mazzeo et al., 2014). The litchi cultivar Feizixiao had lower pollen viability than ‘Baitangying’ (Jiang et al., 2012). The differences among cultivars observed in the present study are certainly indicative of the intervarietal variability, which is also detected in other fruit species, such as apples, peaches, plums, grapes, almonds, and sour and sweet cherries (Godini, 1981; Oberle and Goertzen, 1952; Szabó et al., 1996). Some authors have also reported significant differences in both the viability of clones of ‘Arbequina’ (Rovira and Tous, 2002) and the germination of clones of ‘Leccino’ (Bartolini and Guerriero, 1995). The differences among cultivars in litchi pollen viability attributed to genetic influence might play a significant role too. The weather affected the pollen germination rates in flowers bloom. The pollen germination rates of four olive cultivars had a significant difference between the ‘on’ and ‘off’ years (Gabriela et al., 2013). The litchi pollen quantity and viability had difference between 2009 and 2010. The differences among cultivars and between years in pollen quantity and viability mainly attributed to physiological and environmental factors. The rainy season in 2010 was started nearly a month later than 2009 in Guangzhou. The average temperature in 2010 was 19.75 °C, higher than 17.45 °C in 2009. The pollen quantity and viability of most early-maturing varieties in 2010 were higher than 2009. The pollen quantity and viability of most late-maturing varieties in 2010 were lower than 2009. The results indicated that the pollen quantity and viability can be improved on warm and sunny days.

Differences among litchi cultivars were detected in this study, either for pollen production or viability. Concerning the pollination efficiency of litchi cultivars in general, the pollen quantity and germination rate could be important characteristics considered as indicative parameters of pollen development and functionality. Most litchi cultivars can produce large amounts of viable and compatible pollen grains during the flowering period. Pollen production may not be the main restriction for unsuccessful pollination of litchi. Flowering asynchrony, raining in bloom, and a lack of pollinators may be the main restrictions for unsuccessful pollination of litchi. 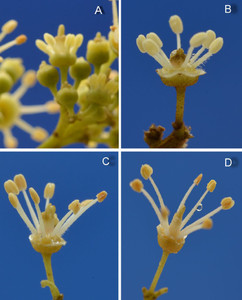 Search for other papers by Liangxi Ou in
Google ScholarClose