Insects provide ecosystem services, such as pollination and biological control. Additionally, flowering ornamental plant species have the potential to support beneficial insect communities, such as pollinating bees, wasps, and predatory plant bugs. We conducted visual observations and sampled via sweep nets to assess the potential of flowering ornamentals to act as a conservation resource for pollinators. Hoverflies (family: Syrphidae), small bees [Lasioglossum (dialictus) imitatum Smith and Halictus ligatus Say], skippers (family: Hesperiidae), predatory plant bugs (family Miridae), and parasitic wasps were frequent visitors to the specially designed Butterfly and Conservation Gardens. Agastache (Pursh) Kuntze ‘Black Adder’ and Celosia spicata L. were the most frequently visited by pollinators among 74 plant taxa. The results obtained will be useful in formulating recommendations on planting the best species for the purpose of attracting pollinators as well as for conservation purposes.

Insects provide ecosystem services, such as pollination and biological control. Additionally, flowering ornamental plant species have the potential to support beneficial insect communities, such as pollinating bees, wasps, and predatory plant bugs. We conducted visual observations and sampled via sweep nets to assess the potential of flowering ornamentals to act as a conservation resource for pollinators. Hoverflies (family: Syrphidae), small bees [Lasioglossum (dialictus) imitatum Smith and Halictus ligatus Say], skippers (family: Hesperiidae), predatory plant bugs (family Miridae), and parasitic wasps were frequent visitors to the specially designed Butterfly and Conservation Gardens. Agastache (Pursh) Kuntze ‘Black Adder’ and Celosia spicata L. were the most frequently visited by pollinators among 74 plant taxa. The results obtained will be useful in formulating recommendations on planting the best species for the purpose of attracting pollinators as well as for conservation purposes.

As decomposers, predators, and pollinators, insects play a vital role in ecosystem health, e.g., decomposers help aerate the soil, turning more soil than earthworms, and increasing soil rainwater retention and tillage (Pimentel, 2002). Predatory insects help keep the natural system in balance and prevent explosive pest population growth from taking over essential natural resources. There are over 6000 insect species that have been considered biological control agents and are being used to fight insect and weed pests (Pimentel, 2002). Moreover, countless other insect species act as pest population regulators but often go unnoticed. Insects also are a crucial part of food security in the United States, with 87 of the leading 115 food crops depending on insect pollinators (U.S. Fish and Wildlife Service, 2016).

Plants use a variety of characteristics, such as color, shape, and odor, to attract insects ensuring that these flower visitors will not leave without being dusted with pollen. Certain flower types are adapted for attracting particular insect groups, such as bees, butterflies, wasps, moths, beetles, and flies (Lázaro and Totland, 2014). Many plants depend on their mutualistic relationships with pollinating arthropods for survival. In turn, pollinators rely on flowering plants to acquire food including pollen and nectar (Kearns and Inouye, 1997).

Research shows that pollinators contribute to 35% of the world’s food production and 24 billion dollars in the U.S. economy (Astegiano et al., 2015). Likewise, native pollinators, such as bumble bees, sweat bees, and leafcutter bees, provide crop benefits that are valued at more than 9 billion dollars (Astegiano et al., 2015). Evidence suggests that pollinating insects of many important plants are declining worldwide (Astegiano et al., 2015; Fukase and Simons, 2016; NRC National Research Council, 2007). Land use, loss, and fragmentation of habitat, modern agricultural practices, and pesticide use pose great threats to insect pollinators and natural enemies (Nicholls and Altieri, 2013). Since 2006, it has been reported that western honeybee (Apis mellifera L.) colony loss rates have increased to an average of 30% each winter due to a variety of factors including loss of natural forage and inadequate diets, mite infestation and diseases, loss of genetic diversity, and exposure to certain pesticides (Astegiano et al., 2015). Other native pollinators, including bumble bees and monarch butterflies (Danaus plexippus L.), have experienced population declines as well (NRC National Research Council, 2007). Systemic pesticides used in production of agricultural products, including ornamental plants, as one of the factors contributing to declining pollinator health (Astegiano et al., 2015).

Providing essential floral resources to natural enemies and pollinating insects can increase biological control and pollination (Fiedler and Landis, 2007; Woltz et al., 2012). Research suggests a diverse butterfly population can be attained through the addition of annual, perennial, and woody shrub ornamental species to a landscape (Poythress and Affolter, 2015; Wilde et al., 2015). Several studies have noted that gardens provide resources through flowers as well as nesting areas that contribute to the survival and reproduction of bees (Frankie et al., 2005; Matteson et al., 2008; McIntyre and Hostetler, 2001). Likewise by attracting pollinators and beneficial insects, ecosystem services can also be attained.

By monitoring pollinator and beneficial insect occurrence within habitat management sites through the use of sweep-net sampling and visual observations, ornamental plant species can be evaluated for their arthropod attractiveness and the provision of arthropod-mediated ecosystem services including pollination and biological control in southeastern landscapes (Kremen et al., 2007). The goal of this study was to provide detailed information on the attractiveness of a wide selection of ornamental floral resources to pollinators, natural enemies, and phytophagous insects as detailed and systematic assessment of pollinators and biological predators on plant species have been limited.

The research was conducted at the University of Georgia Griffin Campus, Griffin, GA (33°24′67′′N, 84°26′40′′W). The research plots (hereafter referred to as “Butterfly and Conservation Gardens”) were established in Oct. 2012. Four plots (total 1705.2 m2, 426.3 m2 per plot) were established in native soil (sandy clay, pH: 5.1,organic matter 3.25%, carbon 0.16%, nitrogen 0.04%) and amended with mulch (West Fraser Timber, Opelika, AL) incorporated at the rate of 2.36 m3 per 92.9 m2 at a depth of 15.24–20.32 cm. Soil samples were collected before planting. No fertilizer was applied prior or during the study, however, no visual symptoms of nutrient-related disorders were observed and plant growth did not appear adversely affected. A total of 74 commercially available annual and perennial herbaceous and shrub ornamentals, including exotic and native plant species, were used. Plants were either grown in-house or purchased from local vendors and at planting were 15.2-cm, 3.8-L, and 11.3-L containers for annual, herbaceous perennials, and woody shrubs, respectively. Plants were selected based on their attractiveness to pollinating insects (commercial marketing information and various web sources) and horticultural attributes and superior adaptability to the southeastern growing environment. Effort was made to create an aesthetically pleasing and seasonally attractive landscape which necessitated the use of various foliage textures and contrasts, e.g., fine vs. coarse, as well as a variety of plant habits, e.g., groundcover vs. upright. To this end, nonnative exotic species prized primarily for their colorful and/or bold foliage such as Colocasia, Hibiscus acetosella, Stachys, and gingers were planted. In addition, Foeniculum, Petroselinum, Melissa, and Passiflora also were incorporated in the planting to serve as food source for the larval stages of various insect species. No pesticides were used for pest control throughout the study.

There were four replicate plots within the garden, three were contiguous and separated by buffer pathways, while the fourth was located in ≈500 m away. Within each of the four plots, each plant species/cultivar had three sub samples. Irrigation was delivered by overhead sprinklers (Hunter Industries Controller with MP Rotator heads on risers, San Marcos, CA) and provided 2.5 cm of water weekly.

Each of the four garden replicates was monitored using visual observations at 10:30–11:30 am and 2:30–3:30 pm twice weekly from 4 June to 5 Sept. 2013. Each plant was observed for 2.0–3.0 s and observations recorded included family and order of insects viewed and plant or location the insect was found.

In 2014, sweep-net sampling was performed in the four garden replicates in which plant taxa were sampled with an aerial net (diameter: 30.5 cm, handle length: 45.7 cm, 7112NA; Bioquip Products, Rancho Dominguez, CA). The net was passed over the outer perimeter of the plant canopy of each plant five times, where the highest density of flowering stems was located). Sweep-net sampling occurred once a week from 10 June to 22 July 2014. Sweep-net contents were placed into a plastic bag and stored in a freezer for preservation until sorting, mounting, and insect identification occurred.

Data were subjected to analysis of variance using the general linear model procedure. Data were transformed before analysis using the arcsin square root transformation for percentage data and square root transformation for count data. Back-transformed data are being reported. For visual observations and sweep-net sampling, plant type was analyzed as a main effect. The main effects of the variables were examined but interactions were not included in the models. Main treatment means for visual observations and sweep-net sampling were separated using Tukey’s honestly significant difference test (SAS Institute, 2010). 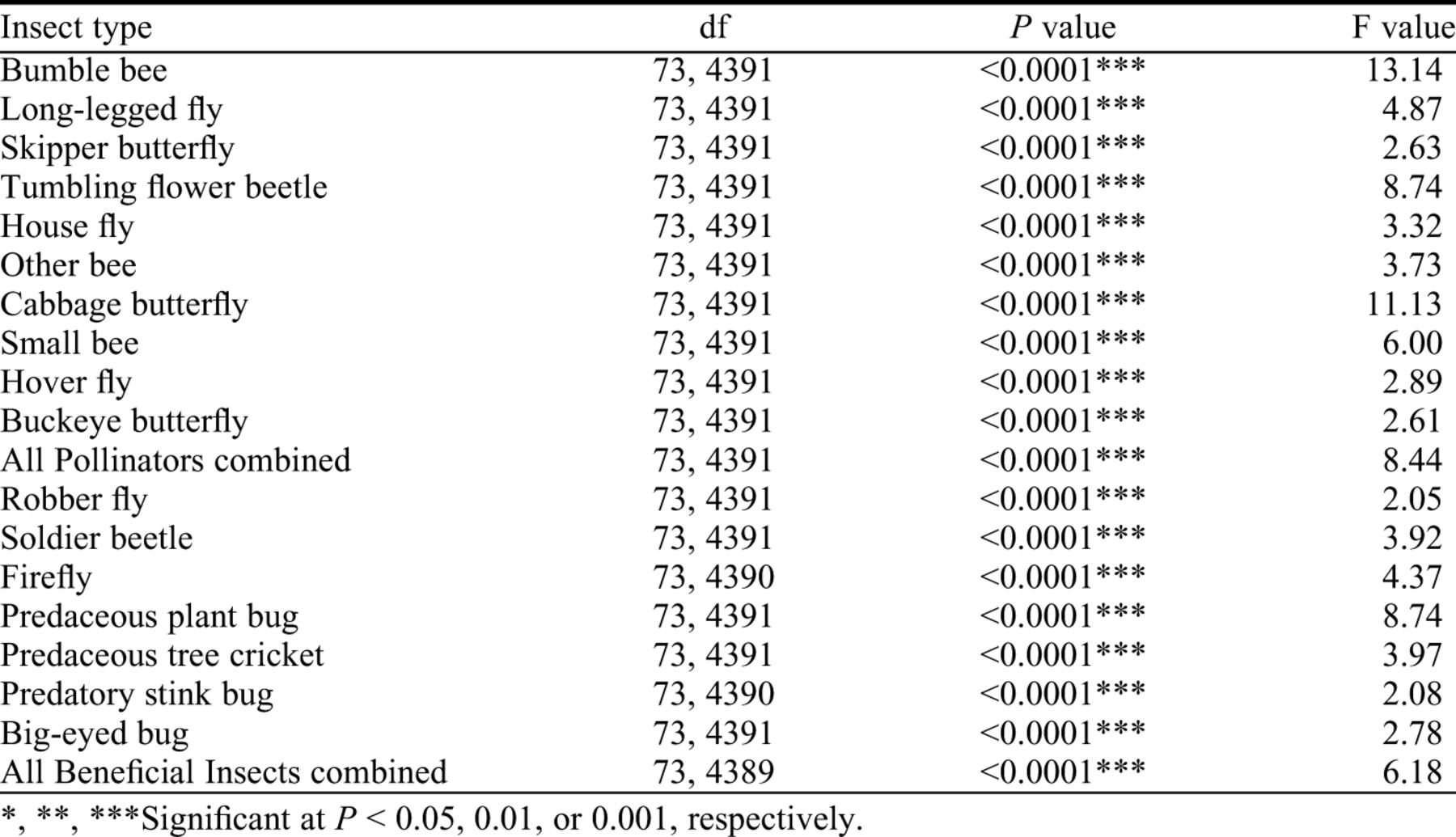 Mean (±se) of pollinators and other beneficial insects directly observed on plant types in the University of Georgia-Griffin Butterfly and Conservation Gardens (n = 4) (Spalding Co., GA).

Mean (±se) of pollinators and other beneficial insects collected via sweep net on plant types in the University of Georgia-Griffin Butterfly and Conservation Gardens (n = 4) (Spalding Co., GA). 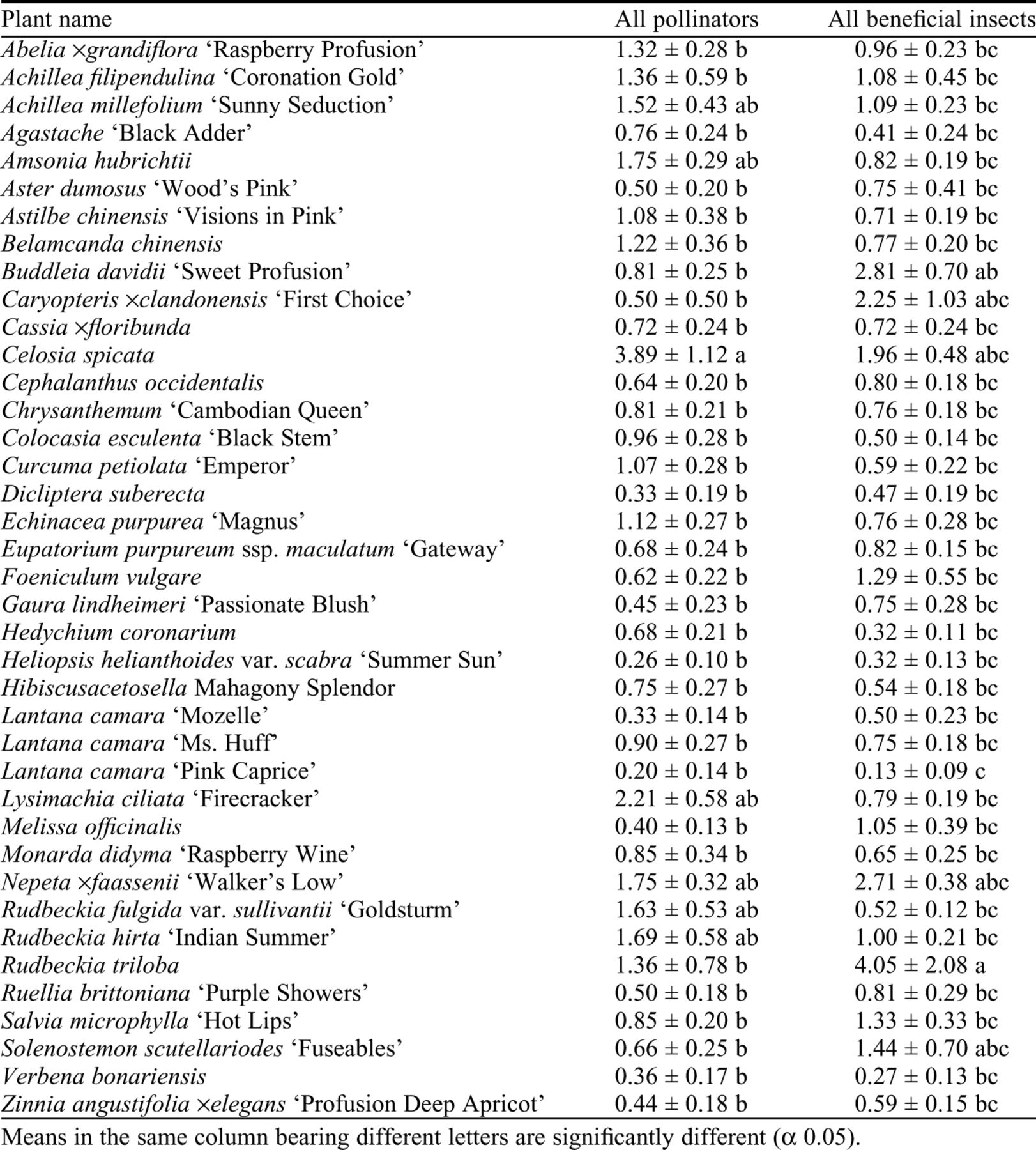 Influence of plant taxa on occurrence of pollinating and beneficial insect taxa collected via sweep net in the University of Georgia-Griffin Butterfly and Conservation Gardens (n = 4) (Spalding Co., GA). 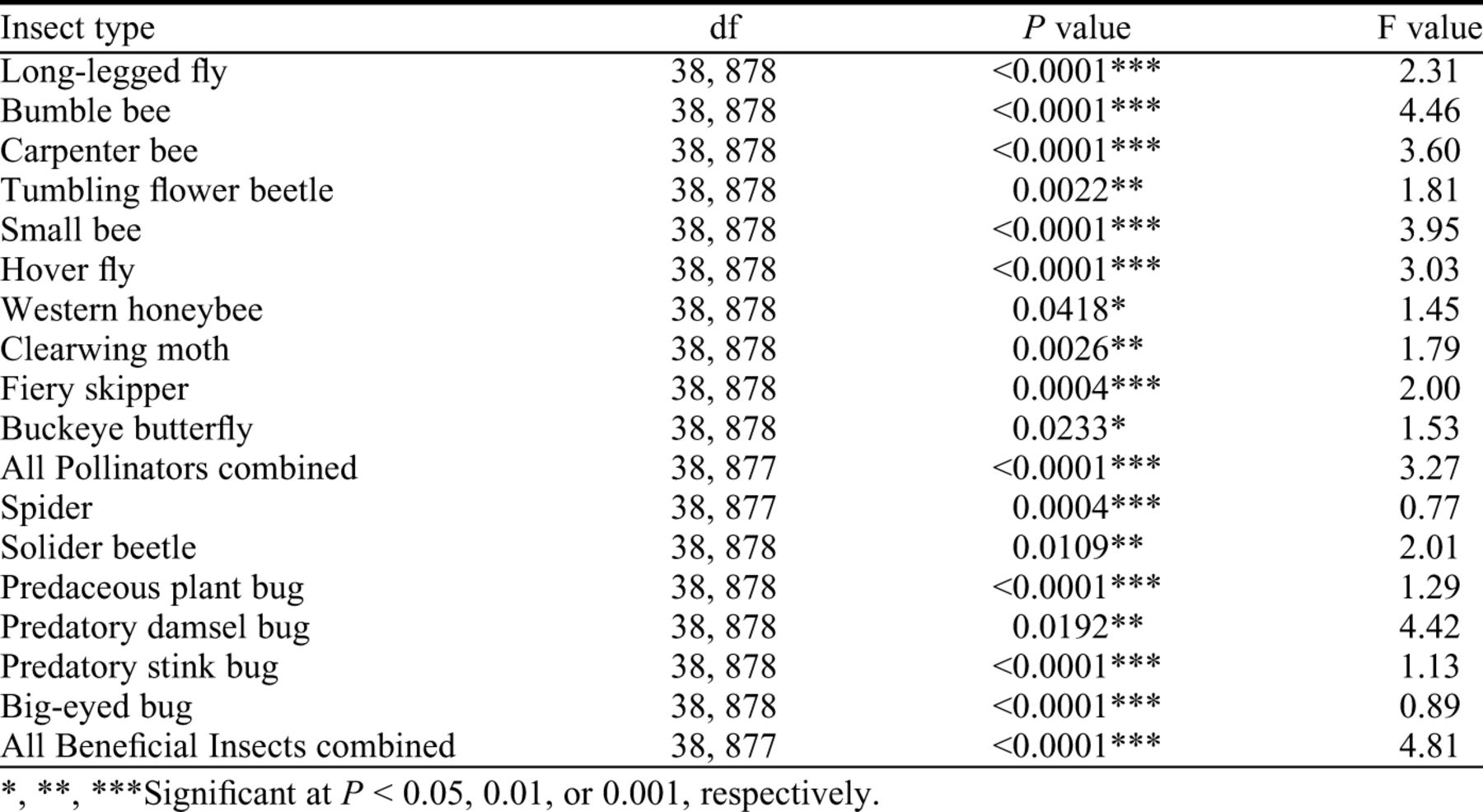 To the best of our knowledge, this study is the first to document the response of pollinators and natural enemies to plantings of ornamental plants suitable for southeastern landscapes. One of the first steps toward conservation of bees and other beneficial insects is to determine which plants will provide adequate resources at different times in the growing season and can be implemented in landscape by land managers, landscape professionals, and homeowners (Tuell et al., 2008).

The gardens attracted a diverse population comprised of pollinators (30+ species and 16+ families) and beneficial insects (20+ species and 9+ families). In addition, species of native bees [i.e., Lasioglossum (dialictus) imitatum Smith and H. ligatus] were identified in the gardens suggesting that pollinator habitats could be created in southeastern landscapes using these taxa. Celosia spicata, Gaura ‘Passionate Blush’, Lantana ‘Mozelle’ and ‘Ms. Huff’, and Nepeta ×faassenii ‘Walker’s Low’ were some of the most visited plants by both pollinators and beneficial insects. This could be due to the vibrant colors, rich nectar and pollen supply, and the variety of floral inflorescences these plants possess. Our research suggests nonnative exotic species, such as C. petiolata, H. acetosella, S. byzantine, and C. esculenta, may also be incorporated in landscape with potential to provide refuge and shelter for pollinators and beneficial insects.

Our study as well as previous research indicates the ecological value of plants are consistent for cultivar varieties and local, wild-type plants (Poythress and Affolter, 2015). Using these data, recommendations can be provided on the applied use of flowering ornamental plants for pollinator and beneficial insect conservation purposes as well as sampling methods that can be employed to effectively survey beneficial insect communities.