Search for other papers by Zachary J. Reicher in
Google ScholarClose

Buffalograss [Buchloe dactyloides (Nutt.) Engelm.] is a warm-season grass native to the Great Plains of North America (Wenger, 1943), and is commonly established from burs containing three to five caryopses (Beard, 1973; Quinn, 1987; Riordan et al., 1993). Most buffalograss is commercially treated with KNO3 followed by chilling to overcome dormancy (Fry, 1995), which increases germination from 10% to 80% (Riordan et al., 1997).

Optimum spring seeding dates for buffalograss cultivars have been determined at various locations in the United States. The optimal date of planting was April to May for ‘Sharp’s Improved’ buffalograss in Kansas (Fry et al., 1993), whereas fastest establishment in Colorado occurred with seeding in late May (Falkenberg, 1982). Buffalograss established when ‘Cody’ buffalograss was seeded from late April through June in Nebraska and late April through July in Utah, but not when seeded in August, September, or October at either site (Frank et al., 1998).

Dormant seeding is defined as seeding late enough in the fall or winter so germination is not expected until soils warm in spring. Dormant seeding is commonly used throughout the Midwest and northern Great Plains of the United States for establishing cool-season turfgrasses, but dormant seeding of buffalograss has not been evaluated. Green et al. (1974) summarized the suitability of cool- and warm-season species for dormant winter seeding, suggesting higher seeding rates should be used for dormant seeding of cool-season grasses to achieve better vegetative cover and to reduce seed loss via winter erosion. However, dormant seeding warm-season bermudagrass [Cynodon dactylon (L.) Pers.] or weeping lovegrass [Eragrostis curvula (Schrad.) Nees] was not successful in that study. More recent work using improved cultivars of common bermudagrass, such as Princess-77, Riviera, and Yukon, showed that dormant seeding can be successful (Richardson et al., 2004; Shaver et al., 2006).

Dormant seeding should allow warm-season buffalograss to germinate as soon in the spring as weather permits, unhindered by labor or weather difficulties that could delay seeding. Earlier germination of buffalograss should allow it to take advantage of early summer precipitation and compete well with summer annual weeds. Furthermore, dormant seeding can increase flexibility in labor scheduling during the busy spring for professionals. However, dormant seeding of buffalograss has not been evaluated in previous research. Our first objective was to determine how seeding rate affects establishment of ‘Sundancer’ buffalograss when dormant or spring-seeded. Our second objective was to determine if cultivar or seeding date affects establishment of the recently developed ‘Cody’, ‘Bowie’, or ‘Sundancer’ buffalograss when seeded at various dates during the winter and spring.

This study was conducted at the John Seaton Anderson Turfgrass Research Facility near Mead, NE, starting in late fall of 2012 and 2013 and continuing until the following August of each year. Soil type was a Tomek silt loam (Fine, smectitic, and mesic Pachic Argiudolls) with pH 7.0, 5.3% organic matter, and 52 ppm phosphorus. This study was a 3 × 2 factorial with ‘Sundancer’ buffalograss seeded at three rates on two dates. Design was a randomized complete block with three replications and plots measured 1.4 m by 1.8 m. Experimental areas were tilled to a 10-cm depth and raked level before seeding. Commercially KNO3-treated ‘Sundancer’ buffalograss from the same 2012 seed lot (95% viability) was seeded at 146, 244 or 293 kg·ha−1 in both years. Seeding dates were 20 Nov. (±2 d) for the dormant seeding and 1 May for the spring seeding. Following seeding, plots were lightly raked with a leaf rake to enhance seed-soil contact. No irrigation, fertilization, or cultural practice was performed on the area until after the spring seeding. Starting 1 May of each year, all plots were irrigated two to four times daily with a total of 0.6 cm of irrigation until seedlings were in the 1–3 leaf stage, then 0.6 cm every other day as needed thereafter based on 100% replacement of evapotranspiration. Starter fertilizer (11N–23P–0K) was applied to all plots at a rate of 49 kg N/ha in the first week of May and again 30 d later. Mesotrione [2-[4-(methylsulfonyl)-2-nitrobenzoyl]-1,3-cyclohexanedione] was applied at 0.18 kg·ha−1 in the first week of May and first week of June in both years to control crabgrass and other annual weeds in all plots. Carfentrazone-ethyl [2-chloro-3-[2-chloro-5-[4-(difluoromethyl)-3-methyl-5-oxo-1,2,4-triazol-1-yl]-4-fluorophenyl]propanoic acid] was applied at 0.04 kg·ha−1 in the first and 3rd week of June in both years to control emerged broadleaf weeds in all plots. Plot areas were mowed at 6.4 cm weekly starting 18 June ± 2 d in both years.

Percentage cover of buffalograss was visually rated every 2 weeks from 22 May until 1 Aug. ± 2 d in both years. Data were first tested with restricted maximum likelihood estimation (Patterson and Thompson, 1971; Thompson, 1962) which found heterogeneity among error variances between years. Therefore, error variance for each year was modeled separately with PROC GLIMMIX in SAS (Version 9.3, SAS Institute Inc., Cary, NC), which allowed the analysis of variance to be performed within each year (Littell et al., 2006). Mean separation was performed using Fisher’s least significant difference at P < 0.05.

This study was conducted adjacent to the previous study and started in late fall of 2013 and 2014. Soil type was a Tomek silt loam (Fine, smectitic, and mesic Pachic Argiudolls) with pH 6.9, 5.1% organic matter, and 65 ppm phosphorus. This study was a 3 × 4 factorial with three cultivars of commercially KNO3-treated buffalograss (‘Sundancer’, ‘Bowie’, and ‘Cody’) seeded on four dates (22 Nov. ± 2 d, 23 Jan., 23 Mar. ± 1 d, and 22 May ± 2 d). Design was a randomized complete block with three replications and plots measured 1.4 × 1.8 m. The cultivars of buffalograss were seeded at 146 kg·ha−1 with seed lots of ≥95% viability, and the same lot of each cultivar was used in the 2nd year of the study after storage at 0 °C. Pre and postseeding management was consistent with the previous study, except irrigation was initiated on 22 May ± 2 d, which was after the May seeding. Percentage cover of buffalograss was visually rated every 2 weeks from 5 June to 1 Aug. ± 2 d when buffalograss cover in most plots reached >90%. Data analysis and mean separation were performed the same as the first study.

There was no effect of seeding rate on buffalograss cover at any time during this study, regardless of year or seeding date (Table 1). By the end of the study, all three seeding rates produced >80% cover, averaged over seeding date and rate for each year. Even though Green et al. (1974) recommend increasing the seeding rate when dormant seeding cool-season grasses, there were few differences in establishment between 1× and 3× recommended rate of the evaluated buffalograss cultivars. Our results suggest that the currently recommended seeding rate of ‘Sundancer’ of 146 kg·ha−1 is adequate and there is no need to increase seeding rates of buffalograss when dormant seeding under the conditions of our study.

There were significant seeding dates by year interactions in percent cover when rated from 5 June through 16 July (Table 1). May seeding dates in both years resulted in higher percent buffalograss cover than November seeding dates from 5 June to 3 July of each year (Fig. 1). Seedlings from the November seeding in the 2nd year were likely damaged by unseasonably cold weather occurring in the 2nd week of May in 2014 when nighttime lows were ≤4 °C for four consecutive days. In a companion study, 80% germination in a Nov. 2013 seeding of buffalograss had occurred by 24 May (Li, 2015) and thus a significant number of seedlings were likely damaged by the cold temperatures. Our results along with previous research suggest dormant or early-spring plantings of buffalograss in the northern Great Plains are subject to frost damage (Leuthold et al., 1991). Regardless of the lower coverage of the November vs. May seedings early in the study, all seeding dates produced equivalent cover (≥80%) by the final rating in August. Our results with buffalograss are similar to those reported for dormant seeding bermudagrass (Richardson et al., 2004; Shaver et al., 2006). It is important to note that our studies were maintained with adequate irrigation, fertility, and weed control to encourage density, which may not be practical in all cases where buffalograss is seeded. Thus, buffalograss establishment would likely be slower on areas maintained with fewer inputs. Additionally, the lower turf coverage from November vs. May seedings may increase spring weed pressure, requiring additional herbicide use by practitioners. A number of herbicide options now exist for weed control in seedling buffalograss, including mesotrione, sulfentrazone[N-[2,4-dichloro-5-[4-(difluoromethyl)-3-methyl-5-oxo-1,2,4-triazol-1-yl]phenyl]methanesulfonamide], quinclorac [3,7-dichloroquinoline-8-carboxylic acid], carfentrazone, simazine [6-chloro-2-N,4-N-diethyl-1,3,5-triazine-2,4-diamine], amicarbazone [4-amino-N-tert-butyl-5-oxo-3-propan-2-yl-1,2,4-triazole-1-carboxamide], sulfentrazone + quinclorac, carfentrazone + quinclorac, or sulfentrazone + prodiamine [2,4-dinitro-N3, N3-dipropyl-6-(trifluoromethyl)-1,3-benzenediamine] (Li et al., 2015).

Few differences in buffalograss cover due to cultivar were observed in this study, regardless of year or seeding date (Table 2). Damage from cold weather in May 2014 mentioned in the first study, did not occur in this study likely because irrigation was started 2 weeks later in this study and after the week of cold temperatures. Seeding date by year interactions were significant on four out of five rating dates, except the final rating on 1 Aug. (Table 2). November seeding resulted in the highest percent cover of buffalograss compared with the other three seeding dates in the first year of the study. November seeding reached 16% cover on 5 June 2014, whereas the other seeding dates produced <10% cover (Fig. 2). By 3 July 2014, November seeding reached 72% cover while the other seeding dates resulted in 44% to 52% cover. In 2015, the three dormant seeding dates of November, January, and March produced similar cover throughout the year and substantially higher than the May seeding date (Fig. 2). This was probably due to record precipitation in early June, which likely caused seed loss in the May seedings because little buffalograss had germinated, and therefore was not anchored by roots before the rain events. Buffalograss requires about 15 d after planting to develop a root system (Gaitan-Gaitan, 1995) and there were only 8 d between seeding and the rain events. However, there was no difference in cover among the seeding dates when rated on 1 Aug., suggesting that buffalograss will fill in from lateral stolon growth regardless of the level of seedling success in early summer. Moreover, it is not necessary to seed at a rate higher than 146 kg·ha−1 when dormant seeding buffalograss.

Our results suggest that ‘Sundancer’, ‘Bowie’, or ‘Cody’ can be successfully dormant seeded at 146 kg·ha−1 from late November through late March. Dormant seeding can allow for establishment sooner in the summer than traditional spring seeding, which can be critical with high weed pressure typical of spring seedings. However, a primary risk with dormant seeding of buffalograss is a period of warm spring weather that stimulates germination, only to be followed by cold temperatures that could kill seedlings, which is similar to risks of dormant seeding cool-season grasses (Green et al., 1974; Reicher et al., 2000). Though cold-temperature damage could slow establishment like in our study, our data suggest that buffalograss can still produce >80% cover by the end of the first growing season when maintained with sufficient inputs during establishment. Based on results from our study and previous studies, seeding dates of buffalograss can be highly flexible. Our data show dormant seeding from late November through late March, while others report standard spring/summer seeding from late April through July should allow establishment before winter in the North Great Plains.

Percent cover of ‘Sundancer’ buffalograss in 2013 or 2014 rated on 22 May through 1 Aug. ‘Sundancer’ was seeded in November or May at 146, 244, or 293 kg·ha−1. Means are over three replications and three seeding rates. Mean separation was performed using Fisher’s least significant difference at P ≤ 0.05. Statistical differences (P ≤ 0.05) between seeding dates are indicated by asterisks.

Percent cover of buffalograss on 5 June, 18 June, 3 July, 15 July, or 1 Aug. in 2014 or 2015 when seeded on 3rd week of November, January, March, or May in 2013 through 2014 or 2014 through 2015. Means are over three replications and three cultivars. Mean separation was performed using Fisher’s least significant difference at P ≤ 0.05. Statistical differences (P ≤ 0.05) among seeding dates are indicated by least significant difference bars. 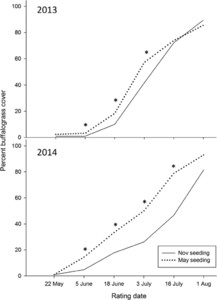 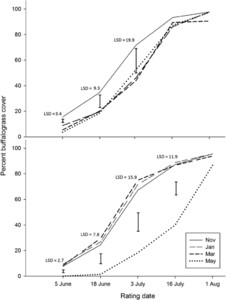 Search for other papers by Zachary J. Reicher in
Google ScholarClose