Nyssa biflora Walt. (swamp tupelo) is indigenous to swamps and bottomlands of the southeastern United States. The species distribution comprises the coastal plain from Delaware to south Florida and east Texas, and extends north to southern Illinois. In contrast, N. sylvatica Marsh. (black gum) is indigenous to much of the eastern United States and occurs from Maine to southern Ontario, to central Missouri, and to eastern Texas and southern Florida. Although swamp tupelo is not marketed for horticultural use, black gum is promoted in the industry as a specimen tree with a strong central leader that supports distinctively stratified scaffold limbs and glossy, colorful foliage. Considered among the most beautiful trees native to North America, cultivars of black gum provide outstanding autumnal foliar color and desirable canopy architecture (Dirr, 2009). Taxonomic confusion may help to explain why swamp tupelo is not a nursery crop. Black gum and swamp tupelo can be challenging to differentiate (Outcalt, 1990), and swamp tupelo has been regarded as a variant of black gum [N. sylvatica var. biflora (Walt.) Sarg.]. Embryological studies suggest that swamp tupelo is more closely related to Nyssa aquatica L. (water tupelo) than to black gum (Tandon and Herr, 1971), and Burckhalter (1992) distinguished swamp tupelo from black gum as one of five North American species of Nyssa.

Naturally occurring in soils usually, but not necessarily constantly, waterlogged (Applequist, 1956; Penfound, 1952), swamp tupelo may thrive where fluctuations in soil moisture and aeration are common. Unlike swamp tupelo, wild plants of black gum are not restricted to wetlands, but instead occur on a soil moisture gradient of dry uplands to alluvial stream bottoms and occasionally on edges of swamps (McGee, 1990). Plants that occupy sites in nature that are flooded seasonally or continuously not only resist stresses that afflict other species in inundated soils, but may also tolerate or resist stress from water deficit (Li and Zhong, 2006). The popular tree bald cypress (Taxodium distichum L.) is one of the numerous species important for horticulture that illustrate the tendency for flood-resistant trees to resist drought also. Within the genus Nyssa, differences in their occurrence in nature underscore the possibility that the highly flood-tolerant swamp tupelo may respond more favorably than black gum to a wide range of soil water contents. Aesthetic features of swamp tupelo include glossy green summer foliage and scarlet-red autumnal color.

Its beauty and potential resistance to extremes in soil moisture justify exploring the potential for using swamp tupelo in horticulture. Propagation protocols are needed by horticultural scientists to generate plants for evaluation and by commercial growers. We focused on propagation of swamp tupelo from seed because of success with other members of the genus. All species of Nyssa form seeds within fleshy drupes. Dirr and Heuser (2006) noted that seeds of black gum can germinate with pulp of drupes intact, although it is unknown whether pulp enhances or impedes seed germination of Nyssa spp. Fagan et al. (1981) demonstrated that seeds of lily turf [Liriope muscari (Decne.) L.H. Bailey] with their mealy covering intact had a lower germination rate than seeds with coverings removed. Norton (1980) found similar effects of removing the aril from seeds of southern magnolia (Magnolia grandiflora L.). Kobayashi et al. (2010) suggested that accumulation of abscisic acid (ABA) in the flesh of fruit of watermelon [Citrullus lanatus (Thunb.) Mansf.] may prevent viviparous germination. Seed germination of spicebush (Lindera benzoin L.) was nearly 100% when fruits were manually cleaned or regurgitated by American robins (Turdus migratorious L.), but was <1% when pulp remained intact (Cipollini and Levey, 1997). We therefore quantified the seed germination of Nyssa spp. by using both intact drupes and seeds cleaned of pulp. Cold stratification is required to overcome dormancy of seeds of many species from temperate climates. Although stratification effects may vary with seed provenance, seeds of black gum stratified at 4 °C for 3 months germinated well (Dirr and Heuser, 2006). On the basis of its distribution in regions with relatively mild winters, we hypothesized that seeds of swamp tupelo are less resistant to germination than seeds of black gum, thus requiring shorter durations of stratification to release embryo dormancy.

Cold, moist stratification of seeds that were cleaned (pulp surrounding endocarps removed by maceration in tap water) or of seeds within intact drupes was initiated on 22 Nov. 2013. An experimental unit comprised 20 seeds of either swamp tupelo or black gum in a polyethylene bag (11 × 15 cm) that contained 100 cm3 of coarse sand moistened with 400 mL of tap water. Units were held in a dark cooler at 5 °C except for those randomly assigned to receive no stratification. Five units were assigned randomly to each species-stratification combination. Of the five units per treatment with seeds of swamp tupelo, three contained seeds from Lake Prince, one contained seeds from Seacock Chapel Swamp, and one contained seeds from Hoke County.

After stratification treatments of 0, 14, 28, 42, 56, 70, 84, and 112 d, seeds or intact drupes were removed from the bags and rinsed with tap water to remove residual sand. The 20 seeds or drupes from each unit were placed on two sheets of 12-ply Versa-Pak™ Cellulose Wadding (K-24; Blue Ridge Tissue Corp., Lenoir, NC) wetted with 200 g of tap water in a transparent, plastic germination box that was 16 cm × 27 cm × 4 cm. Boxes were randomly assigned a position on 12 shelves in a germination chamber with five boxes per shelf. The chamber was equipped with six cool-white fluorescent lamps and programmed at alternating day/night temperatures of 30/20 °C for 8/16 h, respectively.

Analyses of variance (ANOVA) were performed (JMP® 11 software; JMP®, Version 11, SAS Institute Inc., Cary, NC, 1989–2007) on germination value, percentage, and distribution; peak day and value; and mean daily germination. The Tukey’s honestly significant difference option of the software was used to separate means. Data representing cleaned seeds of swamp tupelo and black gum were analyzed together to assess the effects of species, stratification, and their interaction. A separate analysis was done of data that represented cleaned seeds and intact drupes of swamp tupelo to assess the effects of stratification, pulp, and their interaction.

An extract of fruit pulp of swamp tupelo was generated by macerating the fleshy exterior of drupes in deionized water (20 mL of water per 50 fruits). The slurry was strained to remove solids >1 mm. This initial extract was diluted with either two (high concentration) or four (low concentration) parts by volume of deionized water. These extract solutions were used as irrigation treatments along with a deionized-water control. The pour-through method was used to collect leachate from containers in which seeds were evaluated for germination (Torres et al., 2010). Across all treatments, pH of the leachate ranged from 6.1 to 6.4, and electrical conductivity ranged from 0.36 to 0.55 dS·m−1.

Ten seeds of O. basilicum L. ‘Superbo’ (basil), S. oleracea L. ‘Bloomsdale’ (spinach), Z. ×marylandica Spooner, Stimart, and Boyle ‘Double Zahara Cherry’ (zinnia), or swamp tupelo (cleaned of pulp) were sown in each of 12 replicate containers (7.5 cm tall, 8.5 cm across tops, and 6.5 cm across bottoms) filled with LC1 growing medium (Sunshine® Mix No. 1; Sun Gro Horticulture, Agawan, MA). The containers were randomly arranged on one shelf of a growth chamber in which the environment was similar to that used for Experiment 1. To initiate the three treatments, four containers with seeds from each species were irrigated with 80 mL of one of the extracts or with the control. An additional 15 mL was applied to each container 5 and 6 d later. Because of a limited supply of extract solutions, each container was placed in an individual sealed plastic bag after the irrigation on day 6 to reduce desiccation of the medium. Germination, defined as the visual emergence of a hypocotyl above the container medium, was recorded after 14 d. Effect of irrigation treatment was assessed with ANOVA and Tukey’s honestly significant difference test with the software used for Experiment 1.

Comparison of germination responses of seeds of swamp tupelo (Nyssa biflora) and black gum (Nyssa sylvatica) stratified for 0 to 112 d. Values are means of five replications. 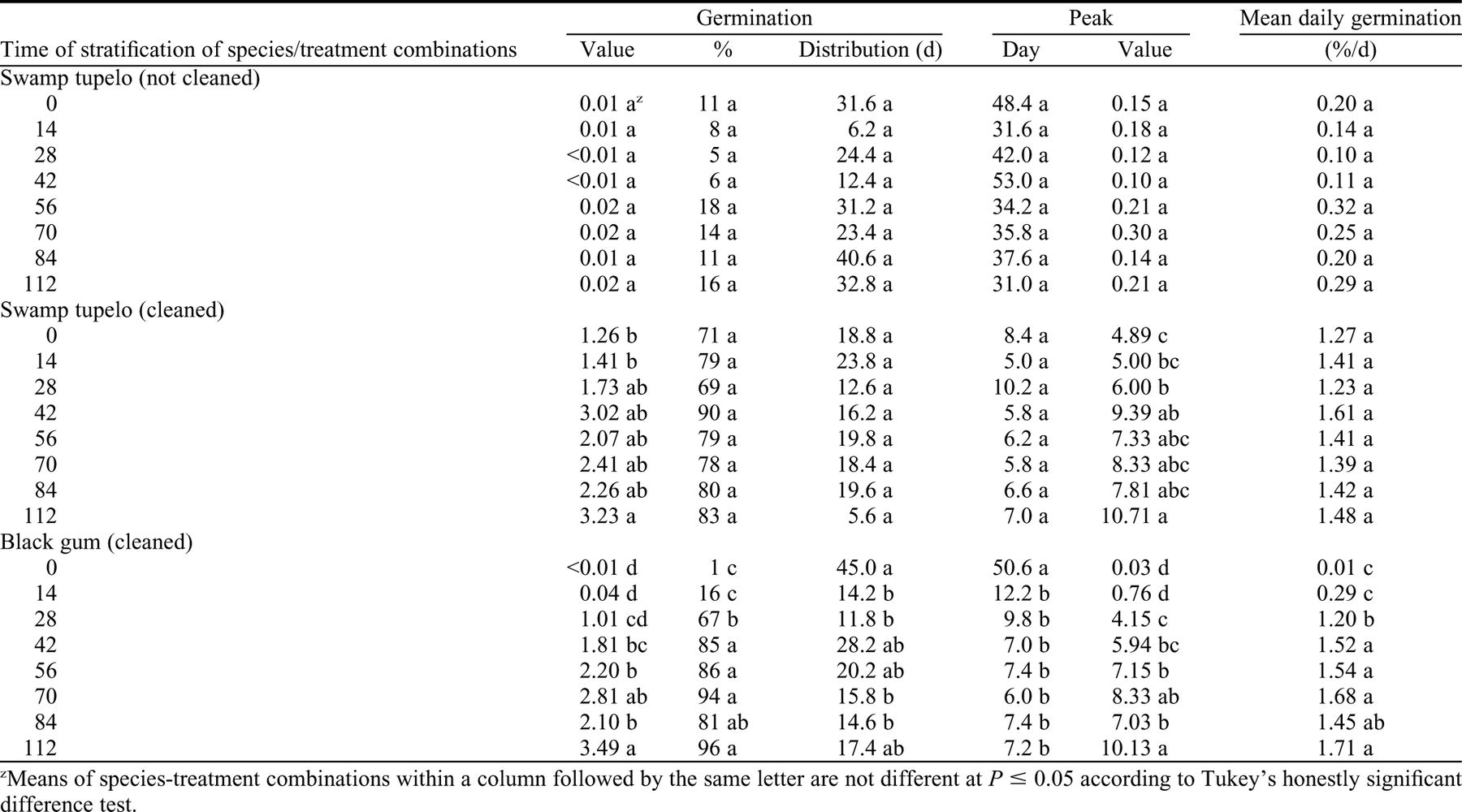 Our results are significant to horticulture in three ways. First, we have shown that cold stratification enhances speed and uniformity of germination of cleaned seeds of swamp tupelo, a species that may have untapped potential for the nursery industry. Second, our hypothesis that seeds of swamp tupelo are less resistant to germination than seeds of black gum was supported. Lastly, we have shown that extracts of the fruit pulp of swamp tupelo inhibit germination of seeds of swamp tupelo and other species. We conclude that swamp tupelo can be propagated reliably from seeds removed from fruits, which would allow for selection from a wide array of genotypes for desired ornamental or physiological traits. Selections should focus on staminate trees of this polygamodioecious species to avoid its drupes, which, although typically <2 cm long and <1 cm wide, may raise maintenance concerns.

Germination of seeds of swamp tupelo within drupes was poor (Table 1) and unaffected by stratification (Table 2). Our finding that 81.4% of seeds that did not germinate were viable, along with the roughly seven-times higher germination percentage of seeds of swamp tupelo removed from drupes (Table 1), strongly supports our conclusion that fruit pulp inhibits germination of swamp tupelo. Evenari (1949) and Mayer and Poljakoff-Mayber (1989) noted that fruits sometimes contain germination inhibitors. Kobayashi et al. (2010) concluded that the presence of ABA in fruit pulp of watermelon may restrict germination. ABA plays a dynamic role in events during seed development such as prevention of precocious germination and induction of primary dormancy; thus, future research might include tests for the presence of ABA in the fruit pulp of swamp tupelo. Seeds in intact fruits of a woody species may differ in germination responses based on the maternal source (Meyer and Witmer, 1998), and differences in nutrient composition of fruits (Cipollini and Stiles, 1992) and in the amount of fruit pulp covering the seed may explain variation in germination due to presence of pulp (Barnea et al., 1991; Howe, 1980; Howe and Vande Kerckhove, 1981; Izhaki and Safriel, 1990). Fruit pulp and exocarps with relatively thick cuticular layers can inhibit germination via osmotic pressure from dissolved sugars and reduced permeability of water (Mayer and Poljakoff-Mayber, 1989). Our research was neither designed to quantify differences among maternal seed sources nor to characterize whether germination responses vary based on wild provenance (Bischoff et al., 2006). Future researchers could address these questions, and explore effects of fruit pulp on seed water relations. 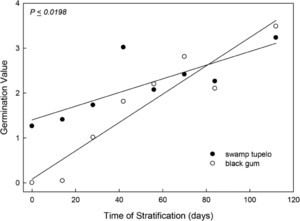