Spring Nitrogen Uptake, Use Efficiency, and Partitioning for Growth in Iris germanica ‘Immortality’

Search for other papers by Eugene K. Blythe in
Google ScholarClose

TB iris (Iris germanica) is a perennial plant belonging to the family Iridaceae. Hundreds of TB iris hybrids exist representing every color from jet black to sparkling white. TB iris is a popular garden plant with potential as a cut-flower crop. In spring, TB iris produces great amounts of shoot growth, which requires sufficient nutrient supply from both internal and external sources. Usually, fertilization in early spring and after spring flowering is recommended for growing TB iris (Lockatell and Spoon, 2011). However, limited information is available regarding how N rate affects spring N uptake and use efficiency in TB iris.

Nitrogen use efficiency (NUE) is estimated as the amount of dry matter fixed in plant biomass per unit of N applied (Marschner, 2012), which integrates two components: plant NupE and use efficiency of absorbed N (NaUE) by the plant (Benincasa et al., 2011). NupE is the ability of the plant to take up N from supplied fertilizer. NaUE demonstrates the ability of the plant to use the absorbed N to produce dry biomass. Considering mean residence time of N in plant tissue affected NUE responses to increasing N availability, NupE showed a more dynamic response to N availability from applied N (Iversen et al., 2010).

C/N ratio of biomass may indicate relative availability of C and N sources (Herms and Mattson, 1992). Carbon constitutes ≈50% of plant DW and provides the structural basis for plants (Agren, 2008) and C compounds provide both energy and the C skeletons for amino acid assimilation. If C supply is insufficient, it will cause decreased N uptake and assimilation (Zhang, 2009). On the other hand, insufficient N supply reduces photosynthetic output, such as, sucrose and glucose (Coruzzi and Zhou, 2001). By controlling N application, C/N ratios can be adjusted in crops to enhance yield and quality.

The objectives of this study were to investigate influences of N rate on plant growth, N concentration, content, allocation, and C/N ratio, and to evaluate the effects of increasing N rate on N uptake, NUE, NupE, and NaUE during the spring growth period.

On 25 Mar. 2013, before the start of spring N treatments, five plants were harvested for background biomass and nutrient composition. Remaining plants were fertigated twice per week from 25 Mar. to 3 May 2013 with 250 mL of modified Hoagland’s solution containing one of five N concentrations (0, 5, 10, 15, or 20 mm N) from 15NH415NO3. The monthly average air temperature was 11.6, 17.7, and 21.9 °C in Mar., Apr., and May 2013, respectively. The experiment was arranged as a randomized complete block design with five blocks. In each block, four plants in one group was an experimental unit receiving one of five N rates. Five plants from each N rate were randomly selected and destructively harvested on 7 May 2013 and the remaining plants were continually treated with the same N rate treatments from NH4NO3 until Sept. 2013.

During the 2013 growing season, number of inflorescences, inflorescence stem length, plant height, and leaf SPAD reading (SPAD-502; Minolta Camera Co., Japan, one of the first two fully expended leaves was selected to measure SPAD reading) data were collected. During harvesting on 7 May 2013, plant height and number of fans were recorded. Each plant was divided into leaves, roots, and rhizomes. All samples were oven dried at 60 °C until constant weight and DWs were recorded by tissue type. All samples were ground to pass a 40-mesh sieve using a Wiley Mill (Thomas Scientific, Swedesboro, NJ).

Differences in plant height, number of fans, DW, and DW allocation in tissues, N concentration, content, and allocation among various rates of 2013 N application were compared using polynomial contrasts at α = 0.05. Effects of N rates on NupE, NaUE, and NUE, and relation between DW and total N content were determined through linear regression analysis. Regression curves were fit to original data and the means were plotted to avoid cluttered figures. Nitrogen and C concentrations in tissues were considered as covariates in an analysis of C/N ratio to evaluate the contribution of N and C concentrations to variance in C/N ratio. Eta-squared [η2 = (SSeffect/SStotal)] was used to assess the proportion of total variance attributable to covariates.

Plant height increased as the season progressed in 2013 (Table 1). From March to April, plant height increased ≈40 cm and there was no difference in plant height among different N rates, which confirms TB iris produce great amount of leaf growth in spring. In May, increasing N rate increased plant height linearly. In April and May, leaf SPAD reading was unaffected by N rate. In many species, leaf SPAD reading has a strong correlation with leaf chlorophyll content, which influences photosynthesis ability of plants (Islam et al., 2009; Wang et al., 2004, 2005).

Greater N rates increased leaf and total plant DW in May 2013, but did not affect root and rhizome DW (Table 2). Between March and May 2013, DW accumulation in leaves increased as N increased from 5 to 15 mm. Plants receiving higher N rates allocated a greater proportion of plant DW to leaves, which indicates increasing N rate promoted more leaf growth than root and rhizome growth. Plants receiving lower N rates had a higher proportion of total plant DW allocated to roots and rhizomes. This is consistent with other research that plants tend to allocate more biomass to the root system to maximize nutrient uptake when limited nutrients are available (Bi et al., 2007; Dong et al., 2004; Scagel et al., 2011).

Increasing N rate linearly increased N concentration in both leaves and rhizomes, but did not affect N concentration in roots (Table 3). The N content in leaves, roots, and total N was quadratically related to N rate, whereas a linear relationship best explained N content in rhizomes. With increasing N rate, the N allocated to leaves increased and N allocated to roots and rhizomes decreased. Photosynthetic capacity is influenced by N content, as N is needed to form key proteins in photosynthesis, RuBP carboxylase, and thylakoid proteins (Evans, 1989). The increasing N content in leaves may indicate more active photosynthesis happened in higher N rate treatments.

Nitrogen allocation trend was similar to the DW allocation to different tissues. The close correlation between N content and DW (r2 = 0.9, Fig. 1) demonstrates the increasing N content is related to increasing DW. Increasing N rate generally increased plant DW, and vigorous growth in turn had an impact on N uptake. In general, a greater portion of N was allocated to leaves across the different N rates, indicating leaves were the major N sink in May.

In general, C/N ratios in all tissues decreased with increasing N rate (Table 3). C/N ratios ranked in the order of root > rhizome > leaf, which is contrary to the order of N concentration. Nitrogen concentration in leaves, roots, and rhizomes increased 1.3-, 1.5-, and 1.7-fold, respectively, as N rate increased from 0 to 20 mm, while C concentration was much less affected by increasing N rate. The decline in C/N ratio was more affected by increasing N concentration which was related to N rate. Nitrogen rates explained 79%, 83%, and 66% of variation in C/N ratio in leaves, roots, and rhizomes, respectively (data not shown). Eta-squared [η2 = (SSeffect/SStotal)] was used to assess the proportion of total variance attributable to covariates.

The amount of NDFF in the leaves, roots, rhizomes, and total plant increased with increasing N rate (Fig. 2A). These results are consistent with many previous studies which also found applying more N increased the amount of NDFF (Andersen et al., 1999; Bi et al., 2007; Righetti et al., 2007). The relationship between N rate and amount of total N uptake was best described using a quadratic model. The increment of total N uptake from fertilizer declined with increasing N rate, which may lead to more N runoff into the environment.

In leaves, roots, and rhizomes, the percentage of NDFF increased with increasing N rate. Percentage of NDFF in leaves was higher than in roots and rhizomes (Fig. 2B). A greater portion of N taken up from fertilizer was allocated to leaves (64% to 73%), which suggests leaves were the major sink of spring N uptake. This is consistent with the results of previous research, which also demonstrated N uptake in spring preferentially allocated to leaves (Dong et al., 2004; Salaün et al., 2005).

NUE is defined as the amount of dry matter fixed in plant biomass per unit of N applied from external sources. In this study, NUE was not statistically different between treatments (Fig. 3A). NUE is not only influenced by the amount of biomass produced by per unit N, but also by the mean residence time of N in the plant. Thus, NupE can better indicate plants’ responses to nutrient availability gradients than NUE (Iversen et al., 2010).

In this study, the relationship between NupE and N rate was best described using a quadratic model (Fig. 3B). When N rate increased from 5 to 10 mm, the NupE increased from 17.1% to 33.7% and then decreased to 26.8% as N rate increased from 10 to 20 mm. The NupE was highest in plants treated with 10 mm (≈33.7%). This indicates N uptake did not increase commensurate with increased N availability (Iversen et al., 2010). To increase NupE and reduce N runoff to the environment, 10 mm (140 ppm) N fertilizer may be considered most appropriate for spring fertilization in TB iris.

In this study, NaUE was negatively related to N rate, which was highest in plants receiving 5 mm N and decreased as N rate increased from 5 to 20 mm (Fig. 3C). The decreasing trend of NaUE indicates the amount of DW produced by a certain amount of absorbed N decreased with increasing N rate. Considering N concentration in rhizomes was significantly increased by increasing N rate, the extra N may be stored in the rhizomes instead of being used to produce biomass which could lead to a decrease in NaUE. 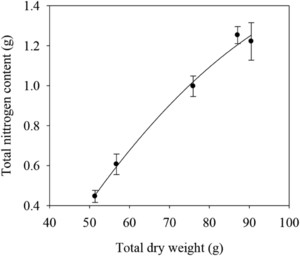 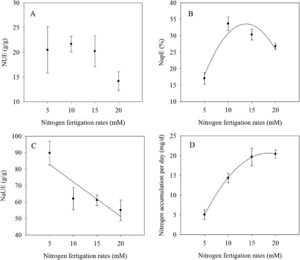 Search for other papers by Eugene K. Blythe in
Google ScholarClose