Temperature Effect on Seed Germination in the Genus Leucocoryne (Amaryllidaceae)

The genus Leucocoryne Lindley is endemic to Chile and is one of the 12 genus in the Amaryllidaceae family from South America (Chase et al., 2009; Sassone et al., 2014). Its habitat extends from the northern Atacama desert of Chile, near the city of Iquique (lat. 20° S) (Muñoz, 2000; Zoellner, 1972) to the southern region of the Humid Lake District (lat. 39° S) (Muñoz and Moreira, 2000). Cytologically, it has been divided into two major plant groups with chromosome numbers of 2n = 10 (n = 5) or 2n = 18 (n = 9) (Araneda et al., 2004; Crosa, 1998; Jara-Arancio et al., 2012). This geophyte genus has been shown to have high ornamental value due to its long-vase life, various colors and shapes, and its ability to grow in pots or gardens alongside cacti with limited irrigation (Bridgen et al., 2002; Catley, 2003; Kim and Ohkawa, 2001; Mansur et al., 2004). There are three commercial varieties currently available in Chile and several others in Holland. Bulbs are commercially available in Chile, Japan, Holland, the United States, and others (Olate and Schiappacasse, 2013). The understanding of seed germination, growth, and development is important for breeding purposes and sexual propagation of these species as an ornamental crop (De la Cuadra et al., 2002; De la Cuadra and Mansur, 2004; Kim et al., 1998a, 1998b; Verdugo and Texeira, 2006).

Seeds of the genotypes studied in the present work were harvested in 2013 (then stored for 4 months) and 2012 (then stored for 16 months) from ex situ bulb collection grown in unheated greenhouse at the School of Agronomy of the Pontificia Universidad Católica de Valparaiso, in Quillota (lat. 32°53′ S; long. 71°12′ W), Chile. Manual seed cleaning was performed after harvest and seeds of uniform size from each genotype were obtained for the experiments.

Before sowing, seeds were disinfected with captan (Captan® 50WP; N-trichloromethylthio-4-cyclohexene-1,2-dicarboximide; Arysta LifeScience North America, LLC, Cary, NC) at 1 g/100 mL for 3 min and rinsed three times with distilled water. Germination was performed on moist paper in petri dishes, under dark conditions at 10, 15, 20, or 25 ± 2 °C. Each replicate consisted of a petri dish containing 50 seeds of a given genotype. A complete randomized design was used with four replicates randomly distributed inside the incubator corresponding to the temperature treatment. Germination evaluation was performed every 2 d. Seeds were considered as germinated when the radicle was 2 mm or longer. If a genotype did not reach 85% germination in at least one of the temperature treatments, a tetrazolium test was performed to control seed viability (International Seed Testing Association, 2003).

This was performed on seeds of L. dimorphopetala, L. coquimbensis, L. purpurea, L. aff. vittata, L. aff. violacescens, and L. ixioides, stored for 4 months after harvest. Dry storage was performed at room temperature (20 ± 5 °C) and relative humidity between 50% and 70%, under dark conditions in paper bags.

This was performed on seeds of L. purpurea, L. vittata, L. aff. vittata, and L. ixioides under the same temperature treatments with seeds stored for 16 months under the same conditions as the previous experiment.

The germination data for each treatment in each experiment were fitted to the model p = A{1 − exp[−k(t − t0)]} developed by Mobayen (1980), where p is germination percentage at every determined time (t), A is the final maximum germination achieved, t0 is the time to the first germinated seed, and k is a measure of germination time spread. High and low values of k indicate short and long time required from the first to the last seed to germinate, respectively. Median germination rate is determined as 1/tA/2, where tA/2 is the time required to reach median seed germination and is calculated as t0 + 0.693/k.

A confidence interval for proportions was used for final maximum germination (A) at P ≤ 0.05. Differences for t0, k, and 1/tA/2 were tested by calculating the corresponding regression coefficients confidence intervals (Walpole et al., 2012).

The seed germination process in Leucocoryne did fit the seed germination model described by Mobayen in 1980 (Fig. 2). Each germination curve had a coefficient of determination (R2) higher than 0.89, except when there was lack of germination data at 25 °C for all genotypes, and at 20 °C for L. aff. violacescens (Tables 1 and 2).

Temperature effect on germination of Leucocoryne seeds stored for 4 mo. before sowing, where parameter A is the final maximum germination achieved, t0 is the time to the first germinated seed, k is a measure of germination time spread, and 1/tA/2 corresponds to median germination time. 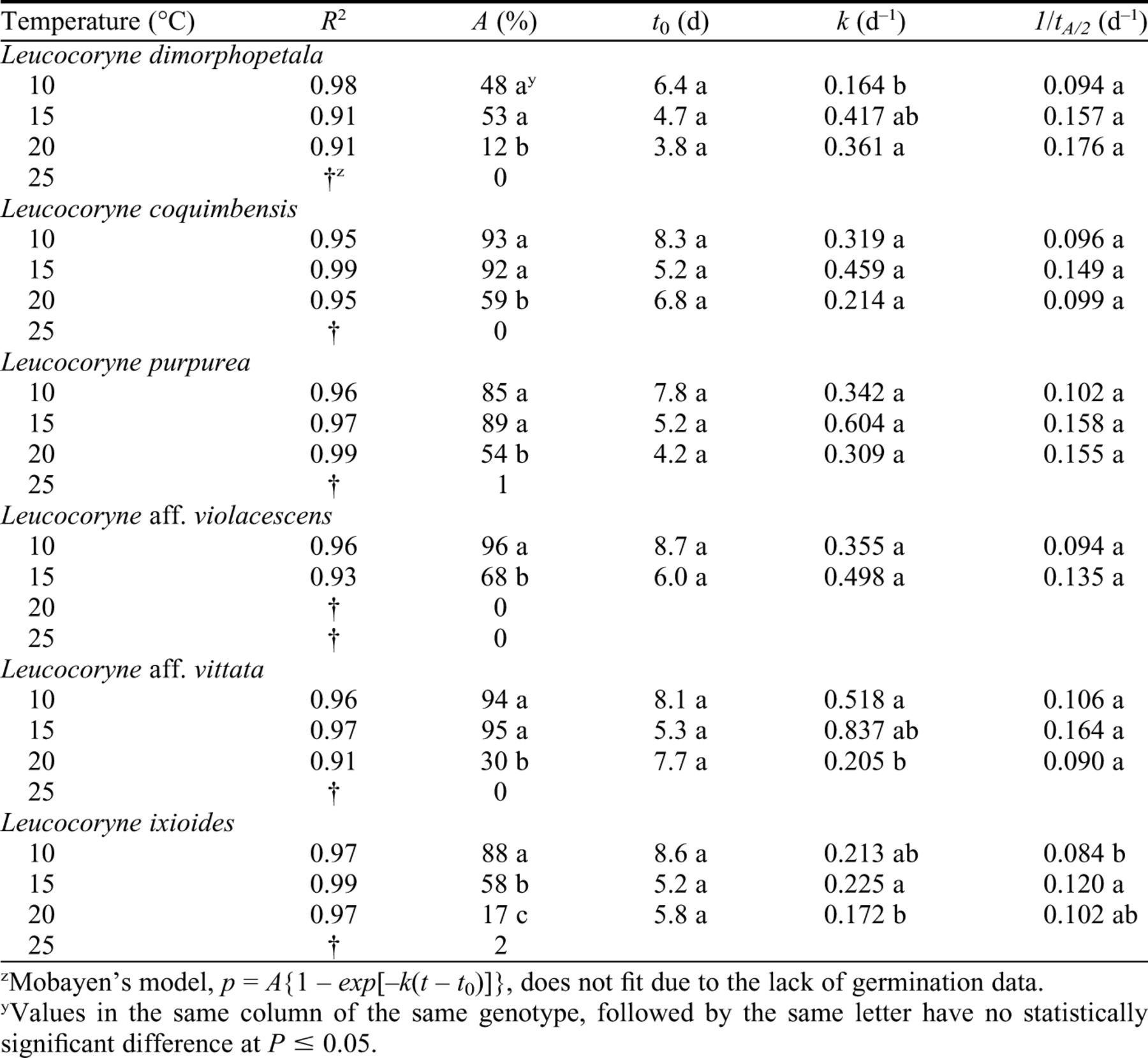 Temperature effect on germination of Leucocoryne seeds stored for 16 mo. before sowing, where parameter A is the final maximum germination achieved, t0 is the time to the first germinated seed, k is a measure of germination time spread, and 1/tA/2 corresponds to median germination time. 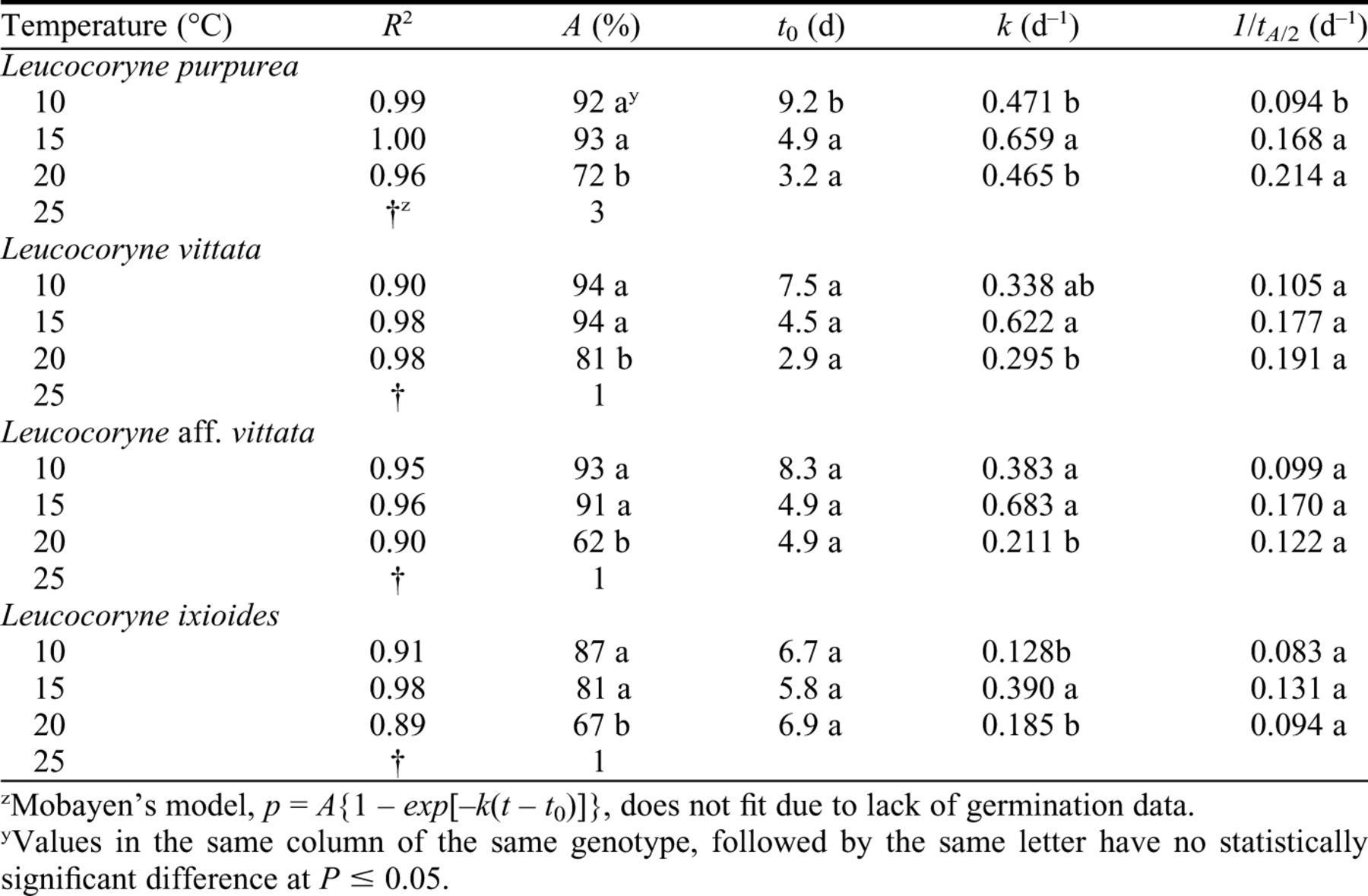 When seed was stored for 4 months, the highest germination percentages were achieved at 10 °C for all species studied. At 15 °C, the results show that L. dimorphopetala, L. coquimbensis, L. purpurea, and L. aff. vittata were not significantly different from at 10 °C. However, for L. aff. violacescens and L. ixioides, final maximum germination (A) decreased by ≈30% when compared with germination at 10 °C. When temperature was raised to 20 °C, A decreased by at least 30% and inhibited germination almost completely in L. aff. violacescens. Finally, germination was nearly zero at 25 °C for all genotypes (Table 1). For seed stored for 16 months, higher germination was observed at lower (10 or 15 °C) rather than at the higher temperatures (20 or 25 °C). A similar trend was observed, where increasing temperature to at 20 °C, decreased germination by around 20% for most genotypes and 13% in the case of L. vittata (Table 2).

Considering both experiments, the final germination at either 10 or 15 °C was over 88%. The only exception was L. dimorphopetala in Expt 1, where germination reached a maximum of only 53%. A tetrazolium test performed showed a seed viability of 84% for L. dimorphopetala and 91% for L. vittata, which was used as control in the test.

To differentiate the performance of the germination process between 10 and 15 °C, the remaining parameters t0, k, and 1/tA/2 were considered. In cases where differences for these parameters were significant, they always show that 15 °C is a better condition than 10 °C for seed germination (Tables 1 and 2). At 15 °C, the time to the first germinated seed (t0) was shorter. On the other hand, the measure of germination time spread (k) and median germination rate (1/tA/2) were higher.

Leucocoryne is a geophyte adapted to grow in the desert and Mediterranean climate of Chile being an important component of the Blooming Desert (Jara et al., 2006; Muñoz and Moreira, 2000; Zoellner, 1972). In natural habitat, if rainfall is over 40 mm (Vidiella and Armesto, 1989), the bulbs sprout from fall to winter, then flower, and set seed at ≈100 to 120 d from sprouting (Kim et al., 1998a). After the plant reaches maturity, the seeds remain in the soil until next winter and if it rains, they will germinate and form a small bulb (De la Cuadra and Mansur, 2004; Mansur et al., 2004). Based on our field observations and the data presented in this work, we conclude that Leucocoryne seeds in the first year seem to behave as a winter annual, germinating in the winter and senescing in late spring or early summer.

It would be logical to expect that seeds of Leucocoryne have acquired some adaptive strategy as a way to survive in its natural habitat where summers are hot and dry, and winters have mild temperatures with unpredictable rain (Juliá et al., 2008; Novoa and López, 2001). For all species, germination is almost totally inhibited at temperatures of 25 °C. This could be interpreted as an adaptation to their natural habitats, where avoiding germination during hot dry summers would be determinant for the survival of the species (Baskin and Baskin, 2014; Figueroa et al., 2004). If a late spring or summer rain event does occur, it is usually not followed by later similar events that would allow the germinated plantlet to complete its cycle.

Notably in L. dimorphopetala germination at 10 or 15 °C was only 50%, yet the seed was 84% viable after 4 months of storage at 20 ± 5 °C, indicating that a type of seed dormancy mechanism is present in this species. Leucocoryne dimorphopetala, unlike the other genotypes studied in this work, is characteristic from desert climate and based on molecular data (Jara-Arancio et al., 2014) and flower morphology (L. Mansur, unpublished data) belongs to a different lineage. Under the extreme dryness of the Atacama Desert, inhibition of germination during winters with lack of rain and successive hot summers could be a determinant factor of its survival strategy where its seeds can only germinate when the phenomena of Blooming Desert occurs (Gutiérrez and Meserve, 2003).

When comparing germination of seeds stored for 4 months vs. 16 months, inhibition observed at 20 °C decreased after the longer storage (Fig. 3). Germination requirements may change during storage at 20 ± 5 °C, where at supraoptimal temperatures, older seeds (stored for 16 months) have higher germination rate than fresh seeds (stored for 4 months). Leucocoryne seeds may be sensitive to after-ripening changes in dry seed, characterized by widening the temperature range or window permissive for germination (Finch-Savage and Leubner-Metzger, 2006).

This work and that of Jara et al. (2006) shows that L. purpurea, as well as L. dimorphopetala, L. coquimbensis, L. purpurea, L. vittata, L. ixioides, L. aff. vitatta, and L. aff. violacescens are able to achieve their maximum germination values (A) at 10 °C. For most of the genotypes analyzed, 15 °C can also be considered optimal. For all of the genotypes, data suggest that 20 °C and higher are supraoptimal temperatures for germination. When working on laboratory experiments, creating conditions similar to those that the species are adapted to in nature may help achieving optimum growth objectives (Vidal et al., 2012), which in this case are high maximum rate (A), fast (t0 and 1/tA/2), and uniform germination (k) which in nature occurs from late fall to early spring, when temperatures are around 10 to 15 °C (Juliá et al., 2008; Novoa and López, 2001).

Effect of temperatures of 10 (solid lines), 15 (dashed lines), and 20 °C (dotted lines) on seeds of (A) Leucocoryne purpurea, (B) Leucocoryne aff. vittata, and (C) Leucocoryne ixiodes stored for 4 or 16 months. 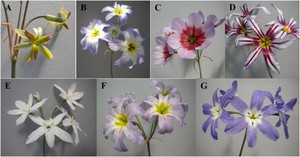 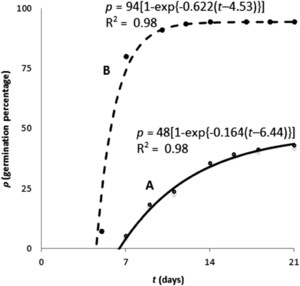 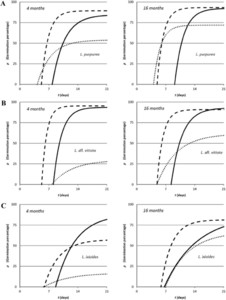