The Connecticut ban was systematically implemented over several years since the initial legislation was adopted. As noted in PA 05-252, which banned lawn care pesticide use on K-8 school grounds (including athletic fields), school grounds/athletic field managers (hereby referred to as school grounds managers) were transitioned from no restrictions with regard to pesticide use to an IPM program with a mandated IPM plan, to no use of lawn care pesticides (State of Connecticut, 2005). Starting 1 Jan. 2006 through 1 July 2010, managers could use an IPM program in accordance with plans consistent with the Connecticut Department of Energy and Environmental Protection (DEEP) guidelines and monitored by DEEP (State of Connecticut, 2005). The full pesticide ban became law on 1 July 2010 on both public and private K-8 school grounds and corresponding athletic fields.

Agronomically, the transition from full pesticide use to a ban on pesticide use has proved to be a challenge for school grounds managers. As noted by Miller and Henderson (2012), a decrease in pesticide use can make it difficult to control weeds, insects, and diseases in turfgrass. To provide guidance to school grounds managers, more specifically turfgrass managers, as they adapt to new pesticide regulations, several studies have put forth suggested alternative management practices to offset the need for regular, scheduled pesticide use (Bingaman and Christians, 1995; Koppenhöfer and Fuzy, 2008; Liu and Christians, 1997; Miller and Henderson, 2012, 2013). Key recommendations include increased overseeding, cultivation, manual weed pulling, and/or the use of EPA approved minimum risk 25(b) products.

The survey of the school grounds managers followed the format described by Salant and Dillman (1994). Contacts from the survey list were sent an initial request for participation in a forthcoming survey. The following week managers received a cover letter, survey, and a postage paid return envelope. Two weeks later managers who had not returned the survey were requested again to respond to the survey. A final reminder card followed 2 weeks after the first reminder request. To increase survey participation, school managers attending educational workshops developed by the Connecticut School IPM Coalition were reminded about participation in the survey. If no response had been received after the second reminder card, each nonresponding school manager on the list was contacted by phone to request participation. School grounds managers were told participation in the survey was voluntary and their survey answers would remain confidential. Before the survey was distributed, it was approved by the university internal review board and had been pretested by five managers before the general mailing.

A total of 47 completed surveys were returned for a 31% response rate. According to Kaplowitz et al. (2004) and Shih and Fan (2008), a response rate in this range is similar to other mail surveys. Given the total population of school grounds managers in the state is ≈151, our sample response rate of 31% allowed us to feel confident that our inferences from the results provide an adequate representation of the management practices of Connecticut school grounds managers. However, the sample size is small in absolute quantity which could potentially limit the findings that have occurred if a larger sample could have obtained. To form an opinion about the representativeness of Connecticut town population estimates, we determined our sample was one from a slightly more urbanized area (sample population density = 1453; average town population density = 738 from Census Bureau estimates). However, this does not invalidate our findings, but is a slight limitation of the study.

Given the questions of interest were frequencies; we used a chi square test to test for distributional differences between the variables of interest. Statistical testing is appropriate for determining whether differences are present; however, a more intuitive hands-on approach is also viable to evaluate the overall picture over time. We, therefore, used the chi square test, along with an observational approach to understand how Connecticut school grounds managers have managed with changing pesticide regulations over time.

In an attempt to understand how changing pesticide regulations have impacted school ground management practices, it is critical to identify the most important pest problems faced by school managers. Of pest problems referenced, crabgrass was perceived to be the most frequently recognized pest problem identified by school ground managers regardless of the type of regulation in effect (Table 1). Other specific problems mentioned were grubs and broad-leaved weeds, especially dandelions.

Top problems described by school ground managers under varying pesticide regulations as found in the 2012 school grounds/athletic field manager survey conducted by the University of Connecticut.

As regulations change, school grounds managers must be proactive in how they manage their turfgrass areas. However, as evident in Table 2, managers do not appear to be changing their management practices. Other than the decrease in pesticide use, there were no significant management changes moving from conventional (calendar) management to IPM to “no” pesticide use. With respect to pesticide applications, it was observed that 54% of the school grounds managers indicated that pesticides were used before any regulations and that use percentage dropped to 11% after the ban was imposed. The 11% may be the result of pesticide application permits that are offered by DEEP in special cases.

Management practices used in kindergarten through eighth-grade school grounds under different pesticide regulations as found in the 2012 school grounds/athletic field manager survey conducted by the University of Connecticut. 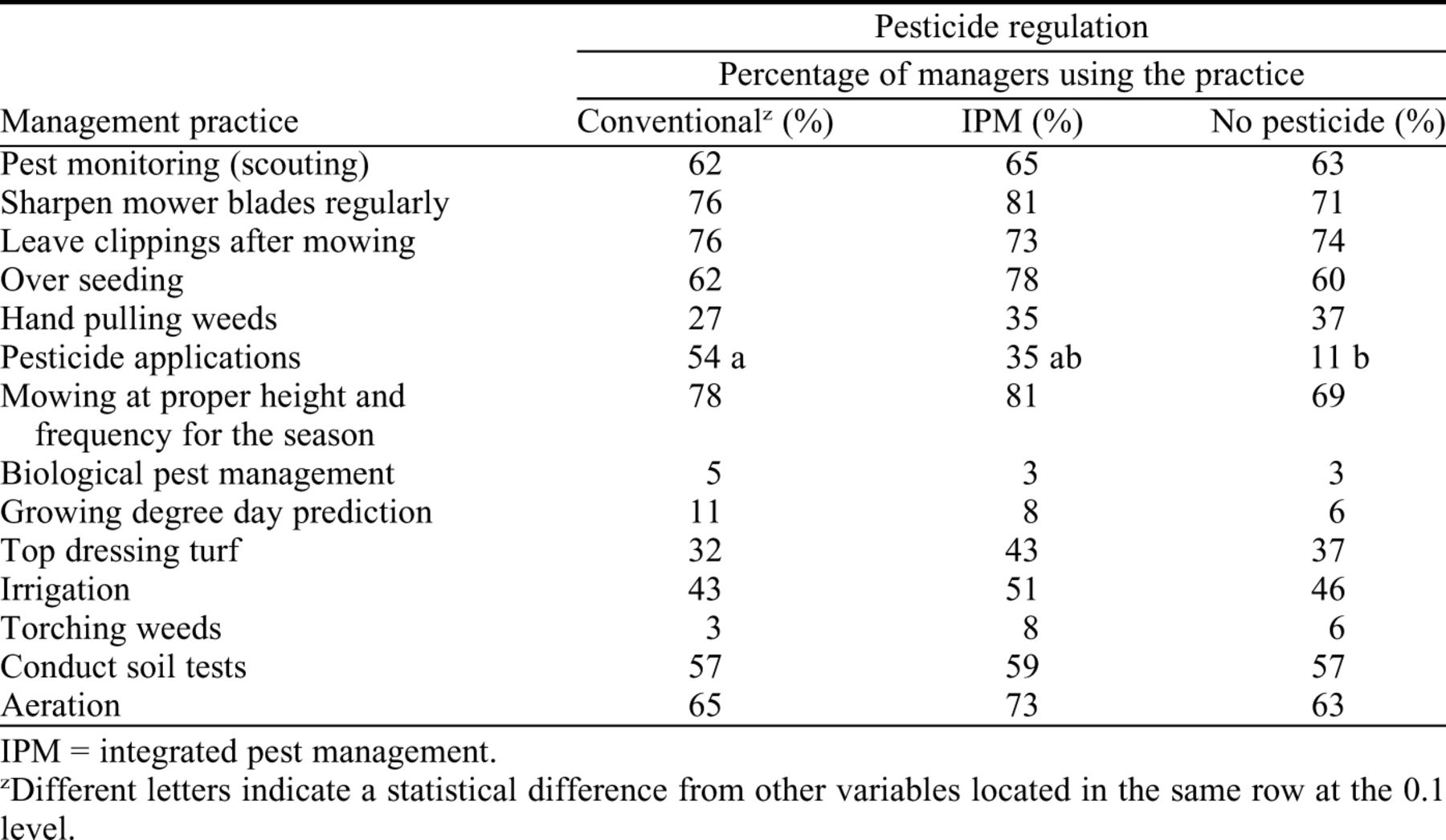 Since the pesticide ban, cultural management practices recommended to help ease the transition away from pesticide dependency (i.e., overseeding and hand pulling of weeds) have not significantly changed. Before the pesticide ban going into effect, 62% of managers used overseeding as a standard cultural practice in their turf care management regime. Under the required IPM program, the percentage of overseeding used by the grounds manager increased, although not significantly, to 78%. However, with the pesticide ban in place, only 60% of managers overseed their athletic fields. A lack of an increase in overseeding practices may be due to a number of reasons. Grounds managers may not be current with sports turf research that favor overseeding as a standard recommendation to improve turf quality in the absence of chemical use (Henderson et al., 2013). There may be budget constraints on towns preventing the purchase of the increased quantities of seed needed each year to maintain field quality. There also could be a lack of effective town-owned overseeding equipment or limited man power to adequately spread the recommended high rate of seed on athletic fields. Finally, K-8 school grounds are not a budget priority compared with the high school grounds.

With respect to management practices used to improve turf quality, hand pulling of weeds was used only by 27% of grounds managers as part of a conventionally managed program. The percentage of use for this practice was increased to 35% and 37% with the incorporation of IPM practices and a pesticide ban, respectively. Even with a total pesticide ban, with limited means of weed control, few managers used and implemented this strategy. This is most likely due in part to the increased labor cost associated with this intensive management activity and limited staff.

Management practices used in high school grounds under different pesticide regulations as found in the 2012 school grounds/athletic field manager survey conducted by the University of Connecticut. 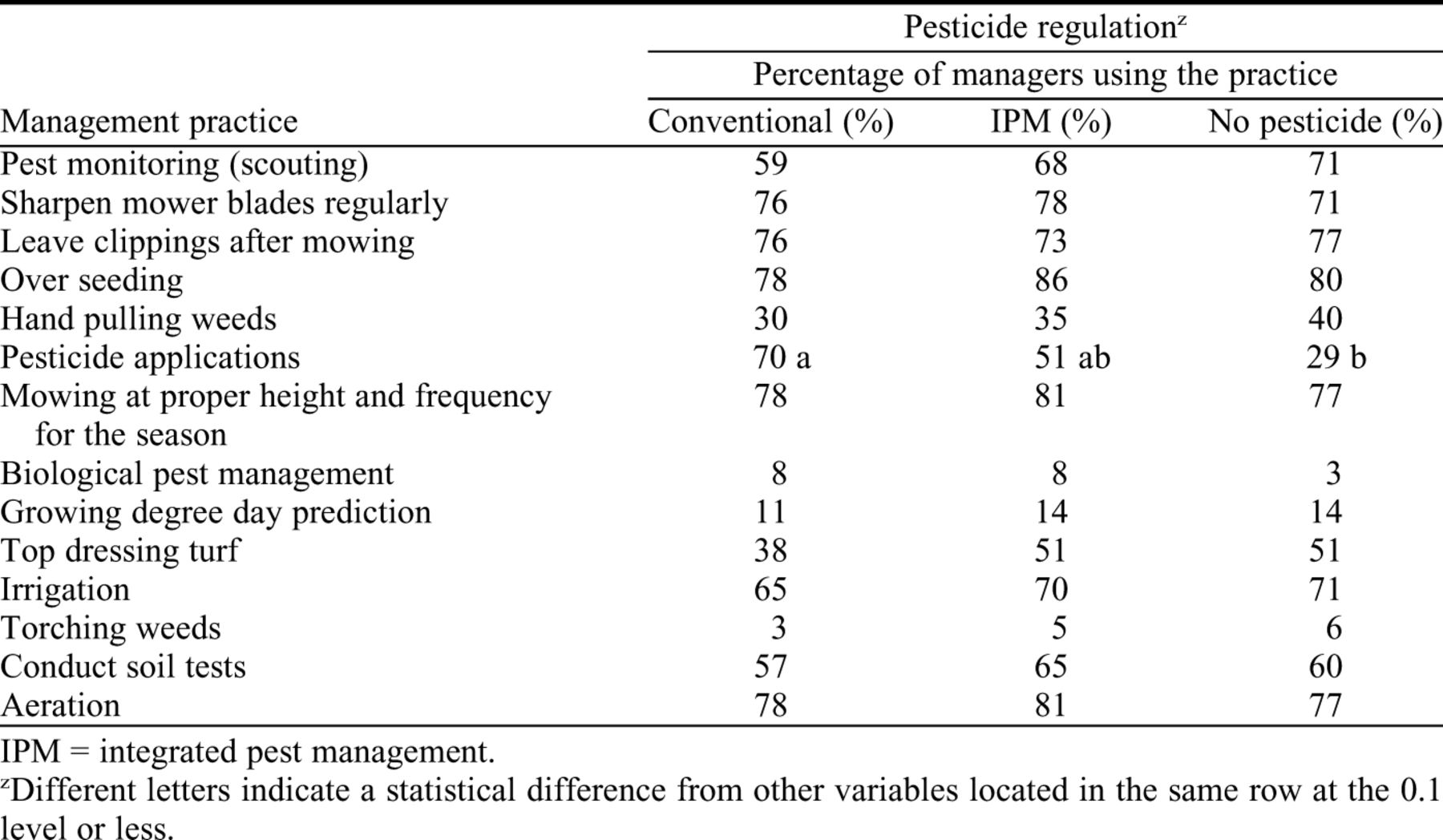 Table 4 indicates that herbicides were the primary pesticide used by school grounds managers. Under the preregulated, conventional and IPM regimes, high school athletic fields, and grounds were most likely to receive a pesticide application compared with K-8 school fields and grounds. This same consistency of use also held true for fungicide and insecticide use. Throughout nonathletic high school ground properties there was a diversity in the types of pesticides used, although the type of pesticide dictated where it was used. In general, herbicides were used on all school grounds properties; however, on nonathletic field areas fungicides and insecticides were not consistently used and not used at all on ancillary areas such as parking lots, sidewalks at K-8 or high school grounds.

Changing pesticide usage by location across pesticide regulations at the kindergarten through eighth-grade (K-8) and high school level as found in the 2012 school grounds/athletic field manager survey conducted by the University of Connecticut.z 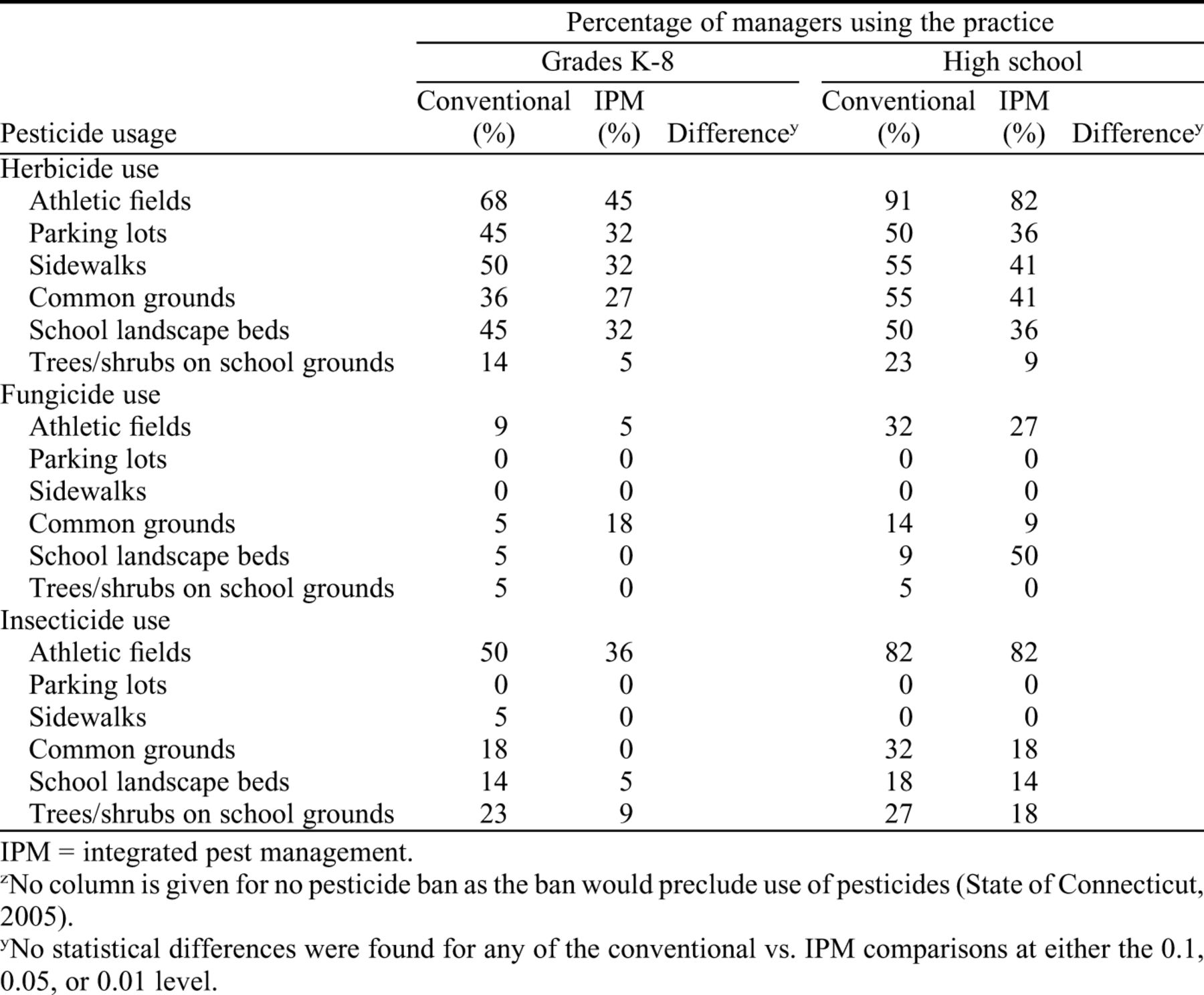 With respect to differences noted, as the IPM regulations went into effect, there were no statistical differences between school properties for both K-8 and high school grounds. From an institution perspective, we do see that under an IPM program, compared with a conventional program, the percentage of managers using pesticides in each location decreased, as indicated by the lower percentages associated with IPM (compared with conventional) for both K-8 and high schools. This would provide some overall evidence that pesticide applications were not significantly different across the management regimes but there was some movement, especially for K-8 properties, to decrease pesticide usage.

Usage of 25(b) products after the pesticide ban as found in the 2012 school grounds/athletic field manager survey conducted by the University of Connecticut.

As more states attempt to regulate pesticides on school properties, it is essential to understand how school ground managers are adapting their management protocols to meet new regulations and redefine acceptable management standards. Given the myriad of studies that have linked playing surface quality to sports injuries (Chomiak et al., 2000; Harper et al., 1984; Orchard, 2002) a failure to adjust turf care practices to improve turf quality and provide safe playing surfaces could be detrimental to children’s health. This study examined how school ground managers are attempting to adapt and realign their management practices to progressively distinct and different turf management regimes driven by mandated regulations. The results indicate that as turf care protocol transitioned from an IPM program to new pesticide-free regulatory requirements, school ground managers have not significantly adjusted their management programs. The percentage of managers applying pesticides on K-8 grounds decreased, as expected, with the implementation of the new pesticide ban; however, pesticide applications on high school grounds have also decreased. Furthermore, it was observed that there has been minimal uptake of minimum risk 25(b) products, the suggested alternative to traditional synthetic pesticides.

The results observed from this study indicate that while school ground managers have made substantial changes to their pesticide application practices, grounds managers have been reluctant to implement other cultural practices that also would improve turf quality. The reason for this is largely unknown, but our hypothesis is that school ground managers are facing budgetary issues that have often drastically limited their ability to implement potentially costly management practices and increase labor requirements necessary to improve turfgrass quality and offset the loss of pesticides. It should be noted that at the time of the enforcement of the new pesticide regulations, many school districts and municipalities in Connecticut were in step with national trends and forced to reduce their overall maintenance budgets to adjust to the declining nation-wide economic distress. Also, the true impact of the ban was not realized until the 2nd year after the ban was implemented. To date, many Connecticut districts still have yet to see improvements in their maintenance budgets, which causes school managers to constantly struggle to adequately meet the mandated challenges imposed on them with the 2010 pesticide regulations. For instance, hand pulling of weeds would require an exponential increase in labor expense, and overseeding athletic fields at rates that would improve turf density would require a substantial increase in the volume of grass seed required to be purchased. Many districts chose to or had no choice but to maintain a minimum level of care with the deficit in funding support.