Search for other papers by Stan C. Hokanson in
ASHS
Google Scholar
PubMedClose

Roses are popular landscape plants valued for their beautiful and diverse floral displays that can be enjoyed throughout the majority of the growing season. Most of the landscape rose cultivars available today are not reliably winter hardy in U.S. Department of Agriculture (USDA) Plant Hardiness Zones 3 and 4 (USDA Plant Hardiness Zone Map, 2012). Susceptibility to rose black spot (Diplocarpon rosae F.A. Wolf) and other foliar diseases such as spot anthracnose [Sphaceloma rosarum (Pass.) Jenk.] is also a limiting factor. Foliar diseases defoliate plants and reduce the ornamental value, vigor, and winter survival of susceptible cultivars. A breeding program was initiated at the University of Minnesota in 1990 to develop cold-hardy, repeat blooming, black spot–resistant landscape rose cultivars available for use in northern continental landscapes (Zuzek and Hokanson, 2007). Below we describe four polyantha rose cultivars developed by the Woody Landscape Plant Breeding and Genetics Project at the University of Minnesota.

Polyantha roses are characterized by their abundant floral displays and compact, well-branched plant habits (Delahanty, 2006). They are sometimes marketed by nurseries as shrub roses because many are low-maintenance roses. The first polyantha cultivar, Paquerette, was introduced in 1875 (Young et al., 2007) and the class grew in popularity into the early 20th century. Their popularity waned with the introduction of their larger-flowered descendants, the floribunda roses. Polyanthas produce well-branched corymbs of many flowers that are relatively small in size and occur over repeated cycles of flowering throughout the growing season. They are derived primarily from Rosa multiflora Thunb. and Rosa wichurana Crép, both section Synstylae species (Krüssmann, 1981). With today’s need for more compact, manageable, healthy, and floriferous landscape shrubs, polyantha roses have much to offer (Zuzek and Hokanson, 2007). At the onset of the breeding program, several polyantha rose cultivars were acquired and evaluated for their performance in Minnesota. Although many had desirable ornamental features, their winter hardiness and disease resistance were not sufficient for Minnesota landscapes.

In 1992, an unlabeled rose was discovered in the Nelson Rose Garden at the Minnesota Landscape Arboretum, Chanhassen, MN. This rose performed like a polyantha and possessed shared traits with R. multiflora. It was suspected to be a volunteer seedling that arose in the garden, as it does not match the characteristics of any known cultivar described in the literature. The elevated and fused styles, conical corymbs, and foliage characteristics are consistent with a close genetic affinity to R. multiflora and its hybrids, which include roses of the polyantha and hybrid musk classes. The plant was accessioned as UMN Rosa 36 and incorporated into the rose breeding program. Among its valuable traits were continual bloom throughout the growing season, high rose black spot tolerance, reliable Zone 4 crown hardiness, and a dense upright plant habit. It produces relatively small, single white flowers. Northern Accents® ‘Lena’, ‘Ole’, ‘Sigrid’, and ‘Sven’, tested as UMN Rosa 320, 215, 362, and 251, respectively, are all descended from crosses involving UMN Rosa 36 and polyantha cultivars (Fig. 1).

Northern Accents® ‘Lena’, ‘Ole’, ‘Sigrid’, and ‘Sven’ were selected from over 1700 seedlings that represented multiple polyantha breeding lines. These seedling populations were planted and maintained without winter protection or fungicide treatments during their initial 4-year evaluation period at the University of Minnesota Horticultural Research Center in Chanhassen, MN (44°50′ N latitude; Table 1). The Northern Accents® cultivars were selected due to a combination of their strong winter survival, health, attractive plant habit, floral attributes, and ease of stem cutting propagation. They were propagated from softwood and semihardwood cuttings and tested at four out-state locations in Rosemount, MN (44°44′ N); Morris, MN (45°35′ N); Grand Rapids, MN (47°12′ N); and Mora, MN (45°54′ N) for 3 or 4 additional years. In addition, ‘Lena’, ‘Ole’, and ‘Sven’ were planted in Kress, TX, as part of the Earth-Kind® confirmational trials (Harp et al., 2009; N. Rains, personal communication). Northern Accents® ‘Lena’, ‘Ole’, and ‘Sven’ were the first to be bred, and were tested as a cohort. They were approved by the University of Minnesota for commercial release in 2005 with public introduction in 2007. Northern Accents® ‘Sigrid’ was approved for commercial release in 2009 and was introduced in 2011.

Year of pollination, evaluation periods, and year of introduction for the four Northern Accents® rose cultivars.

All four Northern Accents® cultivars share similar growth habits, inflorescence architecture, foliage, remontancy, ornamental hip production, prickles, and ploidy. Growth habits are dense and upright and plant silhouettes are rounded. As with other polyantha cultivars, small blooms are borne in great abundance on well-branched corymbs against small but ample foliage. Flowers are produced in three to four prominent cycles per season and some blooms are typically present on the plant between major flowering cycles. Orange to red round rose hips (1.0 to 1.5 cm in diameter) ripen in autumn and continue to provide ornamental value into the winter. Prickles are slightly hooked and face downward. Northern Accents® ‘Lena’, ‘Ole’, ‘Sigrid’, and ‘Sven’ were found to be diploid (2n = 2x = 14) when characterized for ploidy using root tip squashes and observing cells in metaphase (Zlesak, 2009).

‘Lena’ (Fig. 2) has single (five-petaled) pink/white blend flowers [Royal Horticultural Society (RHS) 61D corolla face; 155A petal base; 57D corolla back; RHS, 1995] with a light fragrance and a diameter of 2.5–3.8 cm. Plants produce an average of 34 flowers per inflorescence. In USDA Zones 3 and 4 in Minnesota, average mature plant size (plants ≥3 years of age) at the end of the growing season was 76 × 91 cm (height × width). In contrast, mature plants trialed in Kress, TX (Zone 7a), with its longer warmer growing season and lack of winter dieback attained a larger size of 140 × 157 cm. The foliage color is medium green (RHS 146A adaxial; 146C abaxial).

Two or three years of monthly evaluation data were collected between 2003 and 2006 for Northern Accents® ‘Sven’, ‘Ole’, and ‘Lena’ at the Grand Rapids (2 years), Morris (3 years), and Rosemount (3 years) locations. Monthly evaluation data were collected during the growing season (2011 to 2013) at Mora for Northern Accents® ‘Sigrid’. Winter injury to plant canopies, measured as the point (height) on living cane tissue above which the cane tissue was killed by cold, was recorded in early spring. Plant height and width were collected annually in October. Level of rose black spot infection and defoliation from rose black spot and other leaf spot diseases were evaluated monthly. In addition, flower size, form, color, and fragrance were recorded.

At the Grand Rapids site, Northern Accents® ‘Sven’, ‘Ole’, and ‘Lena’ have proven to be reliably crown hardy in USDA Zone 3b (−37.2 to −34.4 °C) with snow cover. In Jan. 2005, the three selections also survived a −40 °C cold event typical of USDA Zone 3a (−40 to −37.2 °C) at Grand Rapids. These three cultivars were also reliably crown hardy at USDA Zone 4 test sites (−34.4 to −28.9 °C), where low temperatures of −35 °C and −31 °C occurred in Morris and Rosemount, respectively, in Jan. 2004. Northern Accents® ‘Sigrid’ was crown hardy at the Mora site where the low minimum temperature during the evaluation period was −34 °C in Jan. 2011. During recent warm winters, more typical of USDA Zone 5, some exposed canes survived above the ground on all four cultivars. Although winter cane injury is extensive in USDA Zones 3 and 4, vigorous regrowth of all four cultivars produces heavily blooming plant canopies by late spring, followed by two to three more cycles of canopy growth and rebloom, typical of repeat blooming roses, throughout the growing season.

Northern Accents® ‘Sven’, ‘Ole’, and ‘Lena’ have been characterized for resistance to rose black spot disease, incited by the fungal pathogen D. rosae. In the field, small numbers of rose black spot lesions develop slowly at the base of plants through mid and late summer and only a slight-to-moderate amount of defoliation due to the disease is evident by mid-September (typical first frost). Controlled inoculation experiments using races 3, 8, and 9 of D. rosae were conducted using detached leaves for all four Northern Accents® roses with the cultivar Chorale serving as the susceptible control (Whitaker et al., 2010; Zlesak et al., 2010). Lesion diameter was measured after the incubation interval and is presented in Table 2. In the field plantings, rose black spot disease and other less prevalent foliar diseases can lead to defoliation. Percent defoliation (calculated by nodes of current season’s growth without leaves divided by total nodes) averaged by month across the years is presented over the growing season (Fig. 3). Rose black spot lesion diameters from the detached leaf assays were generally consistent with field defoliation. ‘Lena’ and ‘Sigrid’ were able to limit disease development better than ‘Ole’ and ‘Sven’ in all experiments and all four Northern Accents® roses had 40% or less defoliation by the end of the growing season at the Minnesota regional trial sites.

With mounded, compact, and floriferous growth habits, the Northern Accents® roses can serve as colorful shrub additions suitable for multiple landscape applications. They are useful for mass plantings, borders, groupings, or mixed plantings with other shrubs and herbaceous plants. Because of their compact size and strong repeat blooming habit, they can also be used as floriferous containerized plants placed on patios and balconies. With similar plant sizes and complementary floral displays, the different cultivars can be mixed and used together for more diverse color effects and additional ornamental appeal.

Nonexclusive marketing/distribution licenses for all four of the Northern Accent® rose cultivars can be obtained by contacting the University of Minnesota Office of Technology Commercialization (http://www.license.umn.edu). Please contact Dr. Stan Hokanson with any questions (hokan017@umn.edu). 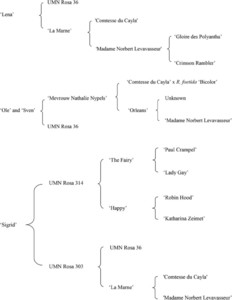 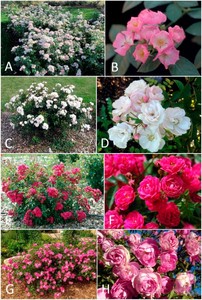 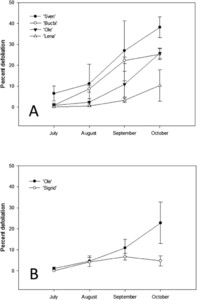