‘NuMex Quasar’ originates from ‘Texas Early White’, a white-scaled onion cultivar released from the Texas Agricultural Experiment Station in 1995 (Goldman et al., 2001; Pike, 1995). ‘Texas Early White’ was developed from an individual white bulb that segregated out of a yellow hybrid cultivar, Ringold (Pike, 1995). Pike (1995) speculated that this white bulb resulted from outcrossing with a white cultivar during the commercial seed production of ‘Ringold’. According to Pike (1995), ‘Texas Early White’ possesses a high level of bolting resistance and pink root tolerance, produces round-shaped bulbs with little greening, and produces a high percentage of single-centered bulbs.

In replicated trials grown in several fields at the Fabian Garcia Science Center (FGSC) and Leyendecker Plant Science Research Center (LPSRC) in Las Cruces, NM, ‘NuMex Quasar’ (Fig. 2) was compared with ‘Texas Early White’ (Monsanto Vegetable Seeds, Woodland, CA), the standard commercial short-day onion cultivar with white dry outer scales grown in southern New Mexico, and ‘NuMex Mirage’ (Cramer and Corgan, 2007), a short-day onion cultivar with white dry outer scales released by New Mexico State University (NMSU) in 2006 (Table 1). The field soil texture was a Glendale loam and a Brazito very fine sandy loam thick surface (pH 7.6). Seeds were sown ≈1–2 cm deep in two rows 6 cm apart from mid September to early October depending upon year (Table 1). For each two-row plot, 1.0 g of seed was sown and plants were thinned to 10 cm between plants within the row. Each plot was 2.4 m long and 1 m wide and separated by an alley of 0.6 m from the next plot on the same bed. The trials were conducted in randomized complete block designs with four replications. Standard cultural practices to produce autumn-sown onions in southern New Mexico were followed (Walker et al., 2009). Drip irrigation was used for trials 1, 2, 3, 5, 6, and 7, while furrow flood irrigation was used at the LPSRC for trial 4. Subsurface drip irrigation lines (T Tape; T-Systems International, San Diego, CA), which had emitters every 20 cm, were placed 10 cm deep in the center of each bed. Irrigation was applied as needed. A urea-based liquid fertilizer (26N–0P–0K–6S; Western Blend, Inc., Las Cruces, NM) was applied as needed for trials 1 and 4, while a fish fertilizer (2.2N–4.4P–0.3K–0.2S; Neptune’s Harvest Fertilizer, Gloucester, MA) was applied as needed for trials 2, 3, 5, 6, and 7. 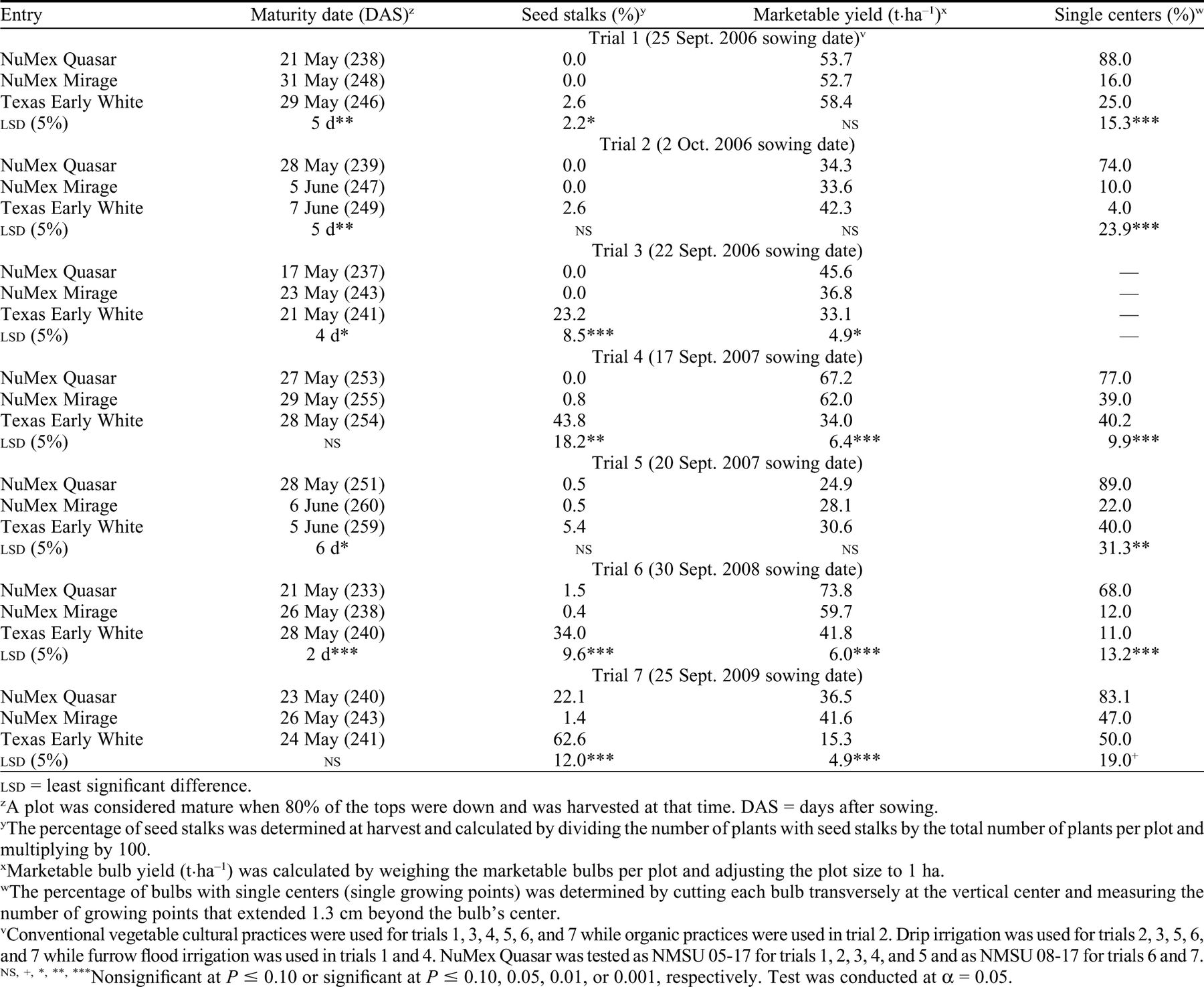 Each plot was harvested when 80% of the plants in the plot had lodged. The harvest date was considered the maturity date, and the days from sowing until harvest were counted for each plot. The root systems of 20 bulbs from each plot were rated for the severity of pink root symptoms on a scale of 1 (no infected roots) to 9 (completely infected roots). After rating, bulbs were placed in mesh sacks and, on the same day, transferred indoors to an onion shed. Bulbs were cured for 3 to 4 d under ambient conditions to reduce storage losses and decay. After curing, the total bulb fresh weight was measured for each plot. Bulbs were graded to remove culls (diseased bulbs, bulbs under 3.8 cm in diameter, split and double bulbs). The number of culls was subtracted from the total bulb number to obtain the marketable bulb number per plot. After bulbs were graded, they were weighed again to obtain marketable bulb weight per plot. The average bulb weight was calculated by dividing marketable bulb weight by marketable bulb number. After weighing, 25 bulbs were cut transversely at the widest point on the vertical axis to determine the percent of bulbs possessing a single meristem. If a bulb possessed a single meristem or multiple meristems within 1.3 cm of the bulb center, then the bulb was considered single centered.

Before harvest during the 2007–08 test year, five plants from each plot of both trials were measured for plant height, leaf length, sheath length, and sheath diameter. Plant height was the distance from the soil line to the highest point of the longest leaf. Leaf length was the distance from the sheath to the tip of the longest leaf. Sheath length was the distance from the soil line to the base of the lowest succulent leaf. Sheath diameter was measured at the midlength of the sheath. These traits were measured to further characterize ‘NuMex Quasar’ and to determine its distinctiveness from ‘Texas Early White’. In addition, five bulbs from each plot were measured at harvest for bulb height and diameter. Bulb height was measured from the basal plate at the bottom of the bulb to the top of the bulb. Bulb diameter was measured at the widest distance perpendicular to the vertical height of the bulb. A bulb shape index was calculated by dividing the bulb height by bulb diameter.

The F test in the general linear model procedure and Fisher’s protected least significant difference procedure of the SAS statistical software (version 9.2; SAS Institute, Cary, NC) were used to determine differences between means of ‘NuMex Quasar’, ‘Texas Early White’, and ‘NuMex Mirage’ for each trait. The Proc Means statement was used to calculate the cultivar means across four replications. 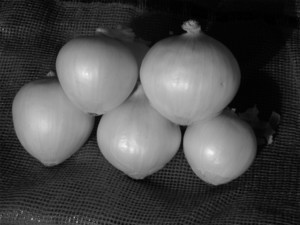