Effect of Temperature on Seed Germination in Spinach (Spinacia oleracea)

The economic value of spinach (Spinacia oleracea L.) continues to grow in the United States as well as globally due to its high nutritive content. Spinach production has been valued over $250 million in the United States in 2014 (USDA, 2015). Spinach is grown for fresh market, freezing, and canning; and 90% of the spinach grown in the United States is for fresh market (Naeve, 2015). California, Arizona, Texas, and New Jersey grow up to 98% of the commercial fresh market spinach (Naeve, 2015). Nearly half of California’s spinach is grown in Monterey County, and although spinach can be grown there nearly year-round, production is limited to the regions and seasons that meet the temperature requirements of spinach (Koike et al., 2011). In Arizona and Texas, production mainly takes place in the winters (CFAITC, 2014).

Spinach is a cool-season vegetable and depending on climate, typically grown in the early spring or late fall when the danger of higher temperatures is not as high (Anderson, 2014). Prior experiments have shown that spinach seeds will germinate in soil temperatures from 5 to 30 °C with germination percentages highest at 20 °C and dropping abruptly between 25 and 30 °C (Atherton and Farooque, 1983). Spinach seed germination has been reported to cease entirely at 35 °C (Leskovar and Esensee, 1999). Substantial seedling root development requires temperatures above 18.9 °C, and top growth will be limited at temperatures below 12.3 °C and above 23.3 °C (Wilcox and Pfeiffer, 1990). Studies have been done on the heat-shock response of spinach, both with whole plants and detached leaf tissue. It has been reported that after being exposed to heat shock (35–50 °C) for 30 min, CO2 assimilation decreases and pigment proteins in thylakoid membranes aggregate, slowing down the plant’s ability to photosynthesize (Tang et al., 2007). In addition, the first heat-shock proteins in spinach leaf tissue are induced when the temperature reaches 28 °C and a full range of heat-shock proteins are produced at 36 °C (Somers et al., 1989). If a spinach genotype has a high germination percentage in high temperature such as 35 °C, it should be a heat-tolerant spinach in germination stage.

Rapid and uniform germination is also necessary for efficient crop production, both in field and greenhouse practices. Although it has been reported that seed treatments may be effective for increasing germination of spinach at higher temperatures (Katzman et al., 2001), managing this trait via selecting heat-tolerant genotypes is a more manageable practice for spinach producers.

Germination under heat stress may also play a significant role in selecting heat-tolerant genotypes. Historically, mass selection was the primary method for developing genotypes, with hybrid breeding becoming popular in recent years, but all are based on field testing (Morelock and Correll, 2008). Although field testing is necessary in many cases, there are numerous environmental effects that contribute to germination performance beyond that of temperature. Therefore, it may be useful to reduce the number of genotypes planted by preliminary testing, improving the statistical approach to reduce error and estimate genotype by environment interaction. Using germination as this pretest has been successful in other crops, such as sorghum (Tiryaki and Andrews, 2001), and would allow quicker and more efficient selections to be made.

The objectives of this study are to determine how temperature affects spinach seed germination and evaluate potential genetic variation for germinating under heat stress.

Nine spinach genotypes were used in this study. ‘Donkey’, ‘Marabu’, ‘Tyee’, ‘Samish’, and ‘Raccoon’ are commercially available genotypes (Snow Seed Company, 2013, http://snowseedcompany.com/). These genotypes were selected because of their popularity and heat-tolerant qualities. ‘Donkey’, ‘Marabu’, and ‘Tyee’ have been marketed as being heat tolerant or good for summer spinach production (Swallow Tail Garden Seeds, 2015 ). ‘Samish’ and ‘Raccoon’ are not described as heat tolerant and were chosen for comparison. Four genotypes from the University of Arkansas spinach breeding program, ‘Ozarka II’, ‘Fallgreen’, F88-310, and F88-354 (Brandenberger et al., 1991) were also used. ‘Ozarka II’ and ‘Fallgreen’ are genotypes that were released in 1984 and 1987, respectively, whereas F88-310 and F88-354 are breeding lines from the University of Arkansas spinach breeding program (Morelock and Correll, 2008). Most of the seeds from these genotypes were harvested in 2008 and stored at −20 °C. These genotypes were selected because of their frequent use in past spinach production in Arkansas, and also because these are advanced lines with very high white rust (Correll et al., 2010) and will likely be used as parents by the spinach breeding program.

The experiment was conducted in growth chambers at the Harry R. Rosen Alternative Pest Control Center of University of Arkansas. There were seven temperature treatments: 10, 15, 20, 25, 30, 32, and 35 °C. The previously reported optimum for spinach germination is 20 °C (Atherton and Farooque, 1983); therefore two temperatures below the optimum, 10 and 15 °C, were used. Previous studies have shown that germination is inhibited at 30 °C (Atherton and Farooque, 1983; Katzman et al., 2001) and suppressed altogether at 35 °C (Leskovar and Esensee, 1999). Therefore, 30, 32, and 35 °C were chosen as the heat-stress treatments.

Seeds were surface sterilized before the germination tests following methods of Sauer and Burroughs (1986). Seeds were first soaked for 1 h in distilled water, then rinsed for 30 s in 100% ethanol. Next, seeds were soaked in a 2% NaOCl solution for 10 min, and finally rinsed with autoclaved water three times.

The germination tests followed the procedures listed by the Association of Official Seed Analysts (AOSA, 1993). For each genotype, 50 seeds were placed on top of two sheets of blotter paper in 9-cm petri dishes. Dishes were premoistened with 2 mL autoclaved water (Heydecker and Orphanos, 1968) and placed into zip-sealing bags to prevent water loss. Seeds were allowed to germinate at the designated temperature for 21 d (AOSA, 1993). Germinated seeds were counted and removed on 7-d intervals beginning the 7th day after sowing. Seeds were considered germinated when 1 mm of the radicle had protruded through the seed coat. The experimental design was CRD with three replicates.

Germination percentages were calculated and analyzed with Microsoft Excel and JMP Genomics (SAS, 2014). Microsoft Excel 2013 was used for data organization and drawing plots to display the germination percentage by temperature. Analysis of variance in JMP was used for statistical analysis. The least squares mean was calculated for each genotype by temperature as well as for each temperature by genotype. The student’s t test is used to analyze the significant differences of the data.

Germination percentages of nine spinach genotypes at each of the seven temperatures.

University of Arkansas germplasm has been incorporated into many genotypes over the years (Morelock and Correll, 2008), and several of these have been used in studies of spinach seed germination under heat stress (Hum-Musser et al., 1999; Leskovar and Esensee, 1999). Interestingly, the University of Arkansas genotypes seem to be among the more heat-tolerant genotypes. In this study, three of the four spinach genotypes from the University of Arkansas had higher germination percentages than the commercially available genotypes (Fig. 2). This may be the result of spinach selection under heat conditions in Arkansas, where spinach breeding lines are planted in the early fall and selected throughout the winter and spring in Alma, AR. Average high temperatures for Alma between August and October range from 24 to 34 °C (U.S. Climate Data, 2015), and recurrent selection of lines that are able to germinate and tolerate these or higher temperatures may have resulted in improved heat tolerance among University of Arkansas spinach germplasm. Recurrent selection has been shown to be a successful strategy in breeding for heat tolerance in wheat (Machado et al., 2010) and the unintended but nevertheless present selection pressure for heat tolerance in University of Arkansas spinach lines may result in future releases of heat-tolerant genotypes.

The optimum temperature for spinach seed germination was between 15 and 20 °C from this study. Above 20 °C, germination percentages decrease, with a sharp drop at 35 °C. Variation among spinach genotypes was observed, suggesting that breeding for heat tolerance is a possibility. The University of Arkansas genotype Ozarka II was more heat tolerant than the other genotypes tested and may be used as a donor of heat tolerance in the University of Arkansas spinach breeding program.

Germination percentage of spinach genotypes at 35 °C. The letters A, B, BC, BCD, BCDE, CDEF, DEF, EF, and F represent the Student’s t test at P = 0.01 level by JMP Genomics and the figure was drawn using Microsoft Excel. 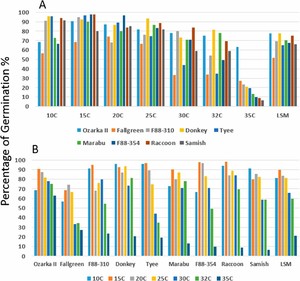 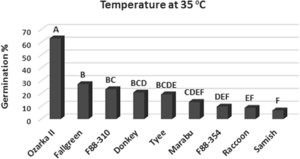