A Suite of High-quality Butternut Squash

Squash is a major crop for vegetable growers in the northeastern United States, with New York and New Jersey accounting for roughly 14% of the U.S. production in 2015 (USDA, 2016). Growers have identified the breeding of high-quality winter squash with powdery mildew resistance as a major priority. This was a goal of the Northern Organic Vegetable Improvement Collaborative (NOVIC), a project to evaluate and develop regionally appropriate seed for organic vegetable growers (eOrganic, 2016), and was echoed in a recently conducted needs assessment of organic vegetable growers in the Northeast (Hultengren et al., 2016).

In the United States, infection by powdery mildew (Podosphaera xanthii, syn. Sphaerotheca fuliginea) causes yield losses in squash (McCreight, 2004) due to reduced number of fruit and also causes lower fruit quality (Zitter et al., 1996). Powdery mildew can be managed through fungicide application in conventional systems, but the increased occurrence of fungicide resistance and the lack of options for organic systems highlight the continued need for host resistance as a priority trait in breeding programs (Pérez-García et al., 2009).

‘Honeynut’ is a miniature butternut with exceptional color, high percent soluble solids, and high percent dry matter, which make it a sweet squash with good texture in a convenient size for consumers. It has become highly popular among consumers and growers (Barber, 2014) and represents a novel type of squash that has been prioritized by growers for future cultivar development, specifically through enhancing the powdery mildew resistance in a ‘Honeynut’-type squash.

In this study, we evaluated the yield, disease resistance, and fruit quality characteristics of new small butternut squash from our breeding program that combine ‘Honeynut’ and ‘Bugle’ (a powdery mildew resistant butternut) in their pedigrees. These new squash were compared with their two parents and ‘Waltham’, a commercial standard butternut squash, under both conventional and organic management systems.

‘Honeynut’ is a high-quality miniature butternut developed at Cornell University. It is a pureline cultivar derived from a cross between butternut (Cucurbita moschata) and buttercup (Cucurbita maxima) and selected to be self-fertile (Robinson, Jahn, and Mazourek, unpublished data). ‘Bugle’ is a disease-resistant butternut developed by Munger and Jahn at Cornell University that contains the Pm-0 gene introgressed from Cucurbita okeechobeensis (Contin, 1978), which confers high levels of resistance to powdery mildew (Cohen et al., 2003; Paris and Brown, 2005). ‘Honeynut’ and ‘Bugle’ were crossed to produce the hybrid ‘Amber Delight’. Six to eight rounds of self-pollination and selection for powdery mildew resistance and fruit quality traits yielded a suite of pureline butternuts (referred to here as HQBN1-5). ‘Waltham’ was originally obtained from Harris Seed.

Butternut seedlings were sown 13 May 2014 in the Guterman Greenhouse on Cornell University campus, using Cornell Peat-Lite (GreenTree, Ithaca, NY) for the conventional trial and Fort Lite (Vermont Compost Company, Montpelier, VT) for the organic trial. After germination, seedlings were transferred to a coldframe on 28 May 2014 to harden off. Seedlings under conventional management were treated with imidacloprid (Marathon®, Bayer Environmental Science, Research Triangle Park, NC) to control striped cucumber beetle, and were transplanted 10 June 2014 on the Homer C. Thompson Vegetable Research Farm (Freeville, NY). Seedlings under organic management were transplanted 12 June 2014 at the Freeville Organic Research Farm (Freeville, NY). Seedlings were transplanted into raised beds with drip tape and black plastic mulch, 10 plants per plot at 3.7 m between rows and 0.6 m between plants in a three-replicate randomized complete block design. Row cover (Agribon®, San Luis Potosí, Mexico) was placed over both sets of seedlings at transplanting to protect against insect pests and inclement weather and was removed on 7 July 2014 to allow for pollination.

Given the dependable occurrence of powdery mildew in upstate New York, plants were exposed to natural inoculum in the field as the source of the pathogen, as has been done for decades in our breeding program. All lines were evaluated for powdery mildew severity once during the season, on 14 Sept. 2014. Percent leaf coverage of powdery mildew was rated on a plot basis, 0% to 100%.

The trial data were analyzed in JMP Pro 11.0.0 (JMP®, Version 11. SAS Institute Inc., Cary, NC, 1989–2007), using one-way analysis of variance. For all analyses with a P value < 0.05, means and sd were calculated, and all pairwise comparisons were made using the Tukey–Kramer method to generate the connecting letters reports included herein.

All of the breeding material evaluated had less severe powdery mildew than the industry standard ‘Waltham’ (70.0% ± 11.0%) (Table 1). ‘Bugle’ had the lowest percent powdery mildew (18.3% ± 7.5%), as was expected for the source of resistance for the breeding lines. The severity of powdery mildew on the ‘Amber Delight’ hybrid, as well as on two of the purelines, was not significantly higher than the severity measured for ‘Bugle’; powdery mildew on the other breeding lines was no more severe than on ‘Honeynut’, which is reported to have moderate field resistance (High Mowing Organic Seed, 2016). The reduction of powdery mildew severity can lead to heavier, higher quality fruit (as plants accumulate sugars for a longer period in the field while leaves are still green) with potential for better storage (Jahn et al., 2002). Through the 2015 Organic Vegetable Breeding Needs Assessment survey (in which northeastern organic vegetable growers were asked to rate the importance of plant traits and indicate their priority as breeding objectives), 89% of growers (93 of 105) agreed that genetic resistance to powdery mildew in cucurbits was important, and 39% of growers (40 of 105) indicated that such resistance should be considered a high breeding priority (Hultengren et al., 2016). Our breeding efforts have captured this disease resistance in these new lines, which will be particularly important for organic growers, whose options for chemical disease management tend to be limited. Genetically resistant cultivars are also needed by conventional growers, whose options are increasingly limited by the pathogen’s development of fungicide resistance (McGrath, 2011).

L* and a* color space values are used to describe the color of the squash fruit flesh. The a* value indicates the red component of the mesocarp’s orange color (with higher values corresponding to more red) and the L* value indicates the lightness of color (with low values corresponding to darker coloration) (Itle and Kabelka, 2009). A squash with a low L* value and high a* value, therefore, has a dark orange color.

Provitamin A is an important nutrient which must be obtained through our diet. Being high in carotenoids—particularly α- and β-carotene (Gross, 1991)—winter squash is a good source of provitamin A. Color space values may be used to estimate carotenoid content: L* value is negatively correlated to total carotenoid levels and a* value is positively correlated to total carotenoids (Itle and Kabelka, 2009). ‘Honeynut’ has low L* and high a* values; the ‘Amber Delight’ hybrid also demonstrates these qualities, and the new lines show promising values. In addition to indicating nutritional quality, the color of squash fruit may contribute to its acceptability, as the appearance of food affects consumer preferences and eating experience (Hutchings, 1993). These lines are more vividly orange. In tomato, volatile carotenoid precursors have been found to impact taste experience (Vogel et al., 2010); if a similar trend exists in butternuts, these lines may also derive a taste benefit from their more intense coloration.

These improved new varieties display exceptional qualities and there is clearly a demand for them. ‘Amber Delight’ was a top performer across all the traits we assessed, providing a good combination of the high-quality traits of its parents, ‘Honeynut’ and ‘Bugle’, and addressing the need for a larger, high-quality, disease-resistant butternut. The butternuts with the overall highest quality were HQBN1 and HQBN2; HQBN3, and HQBN5 were the highest yielding. The new ‘Honeynut’ × ‘Bugle’ lines—high-quality mini butternuts with better disease resistance—have potential utility as either pureline cultivars or hybrid parents. 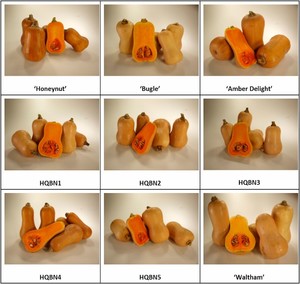