‘Tiffany’ is the second plumcot cultivar released from the National Institute of Horticultural & Herbal Science (NIHHS) of the Rural Development Administration (RDA) in the Republic of Korea. The ‘Tiffany’ plumcot originated in 1999 from a cross between ‘Soldam’ japanese plum (Prunus salicina Lindl., female parent) and ‘Harcot’ apricot (Prunus armeniaca L., male parent). It was released for commercial use in the Republic of Korea in 2011. ‘Tiffany’ has a red-fleshed fruit similar to that of its female parent, whereas ‘Harmony’, the first plumcot cultivar originated from a cross of the same parents, has a yellow-fleshed fruit. ‘Tiffany’ ripens in early July in Suwon, Republic of Korea (127.01°E, 37.17°N), 4 d later than ‘Harcot’ apricot and 28 d earlier than ‘Soldam’ japanese plum. The fruit is round with a slightly fuzzy skin and has sweet taste with a mixed apricot–plum flavor. The flesh adhesion trait is free stone, similarly to its male parent. The average fruit weight is 89.4 g, and its total soluble solids concentration is 14.5 °Brix. ‘Tiffany’ could be widely adapted to wherever apricots are grown. Apricot cultivars that bloom at the same time should be coplanted with ‘Tiffany’ to facilitate cross pollination, because anthers of ‘Tiffany’ have no pollen. ‘Tiffany’ is promising because of its superior fruit quality, excellent functional properties, and sweetness exceeding that of either parent.

A major limitation to the genetic improvement of tree crops is the limited genetic variability typically available to the breeder (Hadley and Openshaw, 1980; Kester et al., 1991). Interspecific crosses are a valuable tool to enlarge the gene pool and to develop new cultivars with good quality, good functional properties, and resistance to biotic and abiotic stresses. Stone fruit breeders have used interspecific hybridization to improve Prunus cultivars and rootstocks, particularly in the subgenus Prunophora (plums), because those species tend to intercross more freely than the species in other subgenera (Layne and Sherman, 1986). In general, apricots and japanese plums cultivated in the Republic of Korea have some cultural problems such as fruit cracking in the rainy season, vulnerability to diseases, and the low fruit set caused by frost damage (Jun et al., 2011). Furthermore, the apricot harvest season is extremely short at less than 2 weeks, because only a few apricot cultivars are grown in the Republic of Korea. Interspecific crosses between japanese plums and apricots have been tried to overcome those problems and to expand the harvest period for stone fruit including the apricot.

Hybrids of plums (P. salicina Lindl., Prunus cerasifera Ehrh., or their hybrids) and apricots (P. armeniaca L.) are referred to as plumcots (Okie, 2005). ‘Tiffany’ plumcot originated from a cross in 1999 between ‘Soldam’ japanese plum (P. salicina Lindl., female parent) and ‘Harcot’ apricot (P. armeniaca L., male parent) at the NIHHS under the supervision of the RDA, Suwon, Republic of Korea (Fig. 1). ‘Tiffany’ was first selected for its good fruit quality and excellent functional properties. The selection was grafted onto ‘Maotao’ (Prunus persica L.) wild peach seedling rootstocks and planted at Suwon (37°16′N, 127°02′E). It was propagated in 2006 for testing as Wonkyo Sa-07. After further evaluation of its characteristics, it was named ‘Tiffany’ in 2010 and released for commercial use in the Republic of Korea in 2011.

To evaluate the properties of ‘Tiffany’, five grafted trees and one original seedling were observed from 2008 to 2010. Six trees each of the interspecific hybrids ‘Tiffany’ and ‘Harmony’ as well as six trees each of the female parent ‘Soldam’ and the male parent ‘Harcot’ were observed for comparison purposes. Developed in 2007, Harmony was the first plumcot cultivar made from a cross between ‘Soldam’ japanese plum and ‘Harcot’ apricot.

Trees of the interspecific hybrid ‘Tiffany’ and ‘Harmony’, the female parent ‘Soldam’, and the male parent ‘Harcot’ were evaluated from 2008 to 2010 under standard commercial conditions in the Republic of Korea. The trees were planted in 6 × 3 m plots and trained to an open center system. The pollinizers of ‘Tiffany’ were planted adjacent to other apricot cultivars such as Choha and Harcot because anthers of ‘Tiffany’ have no pollen. Hand pollination was carried to enhance fruit set when pollinators such as honeybees are scarce under low temperatures (<17 °C). In general, mume, apricot, and plumcot cultivated in the Republic of Korea have low fruit set problem due to early blooming time. After fruit thinning, the final distance between fruits at harvest was maintained as one or two fruits per flower cluster at a distance of 5 to 8 cm. During harvest, 10 fruits per tree were taken from six trees each year from 2008 to 2010 to determine the characteristics. The tree and fruit characteristics were evaluated according to the National Manual for Agricultural Investigation (RDA, 2012) and the International Union for the Protection of New Varieties of Plants (UPOV) guidelines for distinctness, uniformity, and stability of the apricot (UPOV, 2011).

The trees of ‘Tiffany’ were vigorous with upright growth habit unlike those of its parents (Table 1). The fruit were mainly set on 1-year shoots and spurs. ‘Tiffany’ showed less than 1% lesions caused by brown rot [Monilinia fructicola (Winter) Honey], but had 1% to 5% fruit lesions caused by bacterial leaf spot [Xanthomonas arboricola pv. pruni (Smith) Dye], which was similar to the rates in ‘Harmony’ plumcot and ‘Harcot’ apricot. The trees of ‘Tiffany’ were estimated to require 700–750 chilling units according to the Utah model (Richardson et al., 1974) during 2012–14. 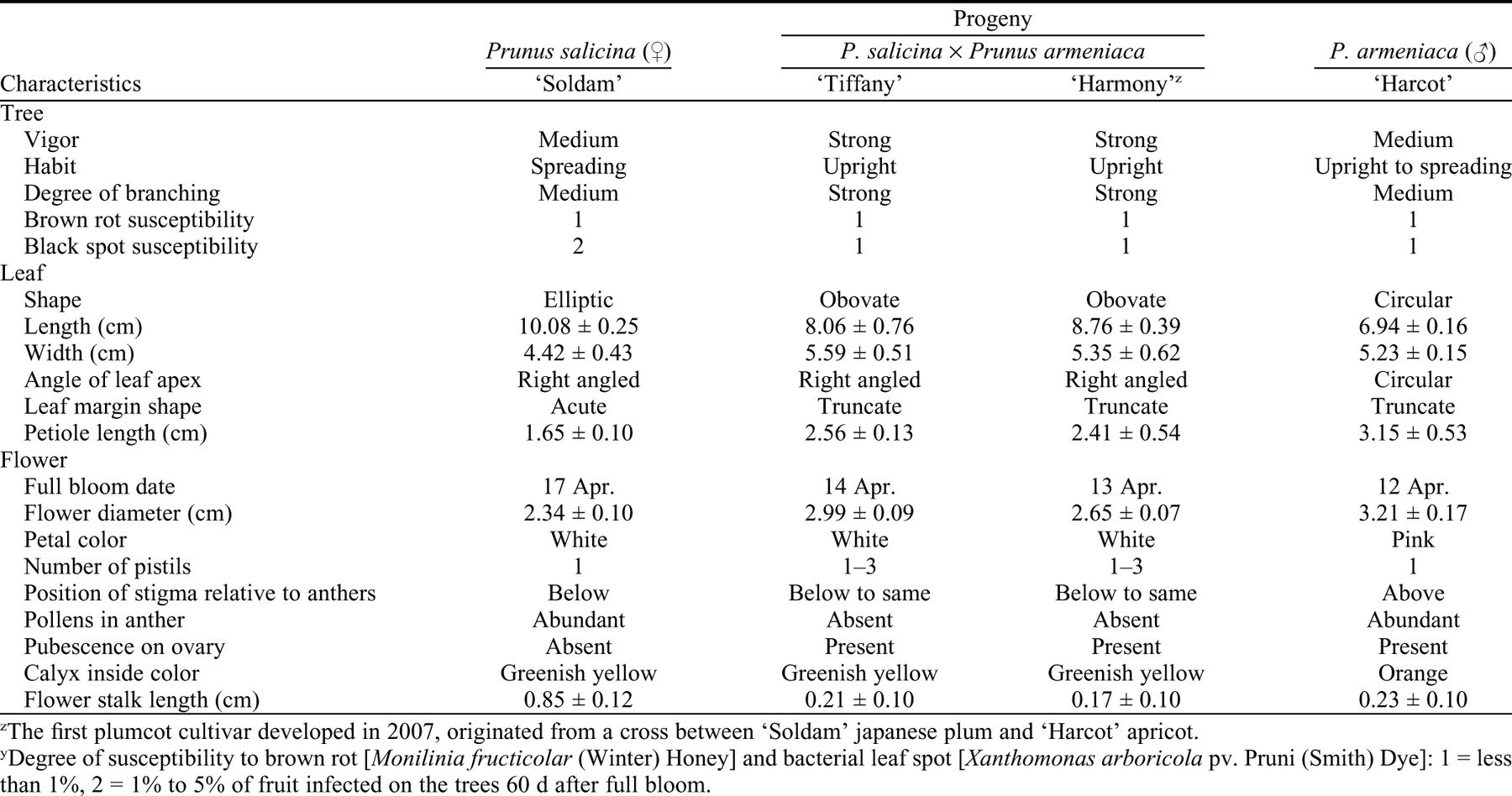 The leaf blades of ‘Tiffany’ were obovate with a right-angled tip similar to those of ‘Harmony’, whereas ‘Soldam’ had an elliptic leaf shape, and ‘Harcot’ had a circular leaf shape. The leaf length and width and the petiole length of ‘Tiffany’ were intermediate between those of ‘Soldam’ and ‘Harcot’. ‘Tiffany’ bloomed fully in early-to-mid April in Suwon, which was 1 or 2 d later than ‘Harcot’ and ‘Choha’ apricots but 5 to 6 d earlier than ‘Soldam’ japanese plum (Table 1). Flowering was abundant in ‘Tiffany’. Eight to ten flowers per flower cluster bloomed for more than 10 d. ‘Tiffany’ had flowers with 2.99 cm diameter and five white petals. Some flowers were abnormal with two or three pistils.

‘Tiffany’ had pubescent ovaries like those of ‘Harmony’ plumcot and ‘Harcot’ apricot. The fruit ground color was yellow orange (YO 15D, Royal Horticultural Society, 2007), and the surface was covered with dark red to purple (RP 59A, Fig. 2). The fruit flesh of ‘Tiffany’ was dark red to purple (RP 59A), while that of ‘Harmony’ was yellow orange (YO 14B). The fruit were large and round, averaging around 89.5 g, when thinned to 8–10 cm apart. Skin cracking and preharvest drop occurred less frequently in ‘Tiffany’ than in ‘Harcot’ apricot. The soluble sugar content (14.5 °Brix) of ‘Tiffany’ was higher than that of the other cultivars, whereas the fruit acidity was lower than that of the other cultivars (Table 2).

Foods today are not only purposed to satisfy hunger and provide necessary nutrients for human health but also to prevent nutrition-related diseases and improve the physical and mental wellbeing of consumers (Menrad, 2003; Roberfroid, 2000). In that regard, functional fruits play an outstanding role in the Republic of Korea. ‘Tiffany’ is a promising new cultivar that can be harvested after ‘Harcot’ apricot. Moreover, it would be commercially profitable with superior fruit qualities such as large fruit size, sweetness, low acidity, and excellent functional properties.

Plant Variety Protection for ‘Tiffany’ was achieved in 2015 according to Korean Seed Industry Law. ‘Tiffany’ was released for commercial use in the Republic of Korea in 2011. Nonindexed scions for research purposes may be addressed to Eun Young Nam (eynam@korea.kr).

Pedigree of the plumcot cultivar Tiffany.

(A) Fruit set, (B) fruits of plumcot cultivar Tiffany, and (C) comparison of (I) ‘Tiffany’ and (II) ‘Harmony’ fruit. The scale is in centimeters. 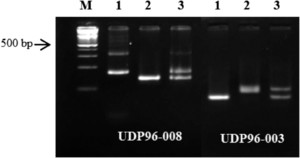