Jack-o’-lantern pumpkin (Cucurbita pepo ssp. pepo) is an economically important crop grown for fall decoration in the United States, and they are traditionally carved and illuminated for display during the holiday of Halloween. In 2014, over 20,000 ha of pumpkins were planted in the United States, with a farm value of $145 million. The state of New York is one of the highest ranked states in value of production each year, often first in the nation. In 2014, the total farm value of the pumpkin crop in New York was $20.5 million, making jack-o’-lantern pumpkins a significant source of income for farmers (U.S. Dept. of Agriculture (USDA), National Agricultural Statistics Service, 2016). Because the crop has such high value, significant effort is put into controlling diseases that could decrease the value of the crop.

Powdery mildew, caused by Podosphaera xanthii and Erysiphe cichoracearum, is one of the major diseases that reduce the yield of susceptible pumpkins (McGrath and Thomas, 1996; Pérez-García et al., 2009). The pathogen is an obligate biotroph (Green et al., 2002) which overwinters in the southern United States on alternate hosts and on greenhouse-grown cucurbits. The pathogen is spread each year by airborne conidia, generally from the southern United States, where cucurbits are grown early in the season, to the northern United States. The disease is easily recognized by its white colonies that appear on the leaves of plants before spreading to the petioles and stems. Older leaves on mature plants are often infected first. Plants that have maturing fruit and plants grown in high-density plots are favorable for the pathogen (McGrath, 2011). Infection can cause the leaves to wither and senesce, which often leads to the death of the plant. This regularly results in shriveled and weakened peduncles (“handles” of the jack-o’-lanterns), reducing the marketability of the pumpkins (Zitter et al., 1996). Because of these factors, resistance to powdery mildew is an important trait for jack-o’-lantern pumpkins. The powdery mildew–resistant (PMR) pumpkin inbred lines we describe herein (Fig. 1) are the original source of powdery mildew resistance in many commercially available pumpkins. This study evaluates and compares the field performance characteristics of these PMR pumpkin inbred lines to commercially available cultivars (Table 1). Considered characteristics include yield, growth habit, size, maturity, and powdery mildew resistance.

Seed sources, pedigrees, and generation of the PMR pumpkin lines and cultivars in the trial.

Development of these PMR pumpkin lines began in the mid-1980s. The immediate source of their resistance was ‘PMR Bush Ebony’, an acorn squash with powdery mildew resistance derived from an introgression with Cucurbita okeechobeensis ssp. martinezii. The resistance trait was first transferred from C. okeechobeensis ssp. martinezii to ‘Waltham’, a butternut squash (Cucurbita moschata), as described by Contin (1978) and, with much effort, introgressed into C. pepo cultivars by crossing to Yankee Hybrid interspecific germplasm. To develop the PMR pumpkin inbred lines, a delicata squash (C. pepo) was first crossed to ‘PMR Bush Ebony’ in 1986 (Fig. 2). The resulting hybrid was crossed and then backcrossed to ‘Spirit’, a small jack-o’-lantern pumpkin. Selection for powdery mildew resistance occurred in every subsequent generation, beginning in 1990 after the first cross to ‘Spirit’. The resulting progeny from the backcross were crossed with ‘Howden’, a large jack-o’-lantern pumpkin, and the progeny of this cross became the parents of all the PMR pumpkin lines. Several independent selections were made, resulting in multiple lineages. One of these lineages was crossed to Snackjack, a pumpkin cultivar with hull-less seeds, resulting in one hull-less PMR pumpkin line, NY14-555. In 1996, several reciprocal crosses were made between lines 96-937, 96-938, 96-941, and 96-944 (Fig. 2). Independent selections from the progeny of these crosses resulted in the remainder of the PMR pumpkin lines (see pedigrees in Table 1). ‘Patina’ was also evaluated in this trial. It is a small pumpkin that was identified in the USDA C. pepo collection and inbred for several generations to create a pure line. ‘Patina’ has a copper and bronze color pattern that makes it desirable for fall decorations (Fig. 1).

A replicated trial was planted at the Homer C. Thompson Vegetable Research Farm in Freeville, NY. PMR pumpkin inbred lines were grown with the commercially available cultivars Howden, Magic Lantern, Racer, and Triple Treat as controls (Table 1). ‘Howden’ is a mid- to late-season, large pumpkin with long vines and is susceptible to powdery mildew. ‘Magic Lantern’ is an early-season, large pumpkin with medium-length vines and is reported to have intermediate resistance to powdery mildew. ‘Racer’ is an early-season, midsize pumpkin with medium-length vines and susceptibility to powdery mildew. ‘Triple Treat’ is a late-season, small pumpkin with long vines, susceptibility to powdery mildew, and hull-less seeds. The seeds of each trial entry were sown in the greenhouse on 19 May 2014. The seedlings were moved from the greenhouse to a coldframe on 30 May 2014, and were then transplanted on 11 June 2014 into 91-cm-wide raised beds covered with black plastic mulch. Drip irrigation was placed beneath the plastic to maintain adequate moisture. Three plots of 10 plants from each line or cultivar were planted in a replicated complete block design with plants spaced 91 cm apart in rows spaced 3.66 m apart. Before transplanting, 643 kg·ha−1 of 13N–5.7P–10.8K fertilizer was applied to the field. The plants were grown with standard horticultural practices, and irrigation was applied when necessary to achieve ≈1 inch of water each week.

The overall shape of the fruit was determined by the ratio of height to width of the fruit. Generally, the fruit were quite round, except for ‘Howden’, which had the largest ratio, and ‘Patina’, which had the lowest. The PMR pumpkin lines range from 0.72 to 0.93, which was similar to the other cultivars, Magic Lantern, Racer, and Triple Treat (Table 2).

Vine lengths were evaluated on 28 Aug. 2014 as a measure of the appropriate planting density for each entry in the trial. The vine lengths were given as a rating of short (<2 m), medium (2 to 4 m), or long (>4 m). The maturity of the lines was also evaluated on 28 Aug. 2014. The rating was given as early, medium, or late ripening, as compared with the commercial checks. The PMR pumpkin lines expressed much variation for both vine length and maturity (Table 2). 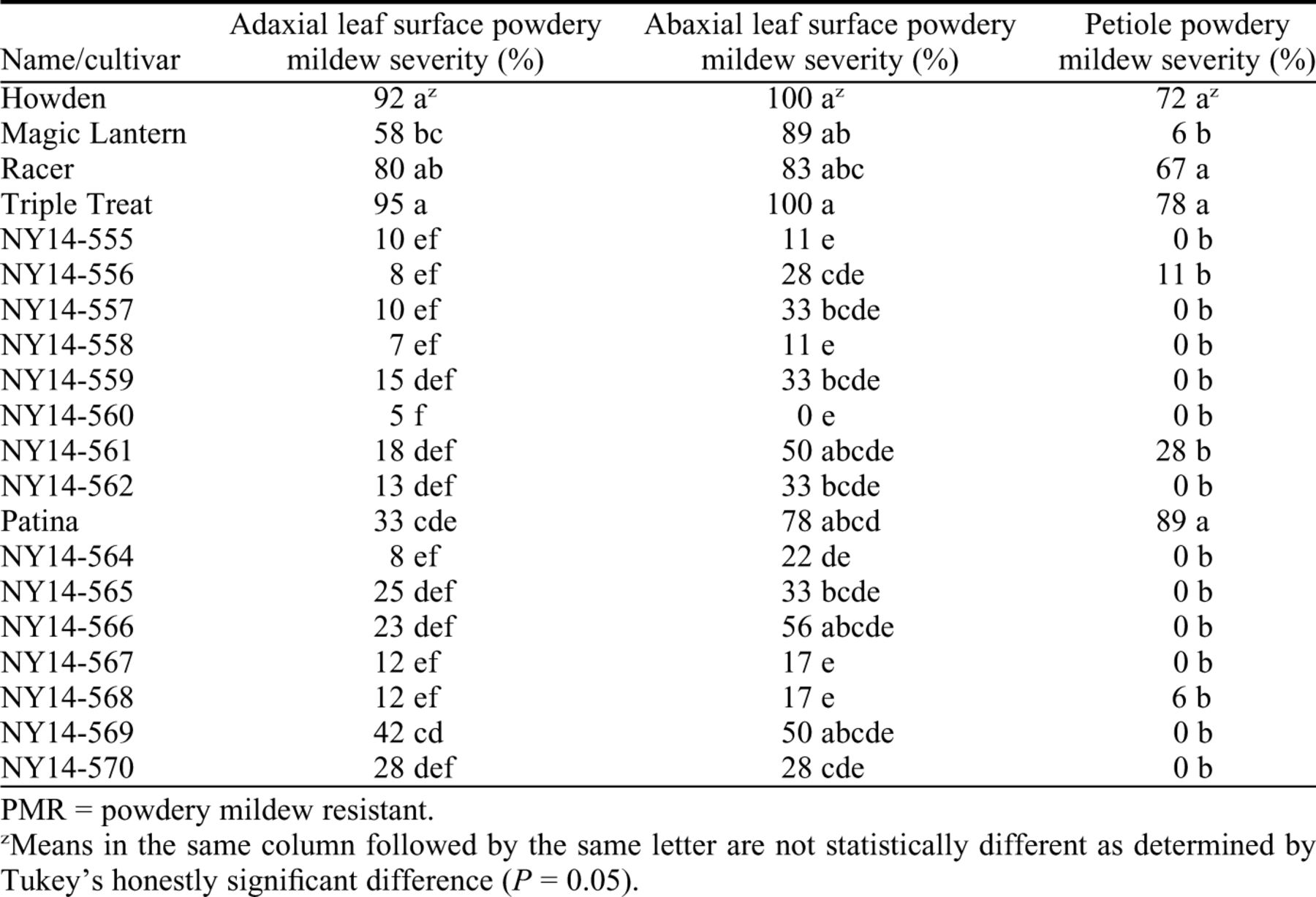 The percent powdery mildew coverage on leaf petioles was also measured in 15% increments. The consensus of the petioles of fully expanded leaves was examined in each plot. There was a dramatic difference in this rating between the cultivars and the resistant lines. ‘Howden’, ‘Racer’, ‘Triple Treat’, and ‘Patina’ had significantly more powdery mildew present than any of the PMR pumpkin lines with over two-thirds coverage of powdery mildew on the leaf petioles. Many of the resistant lines had no measurable powdery mildew presence. However, ‘Magic Lantern’ was not significantly different from the PMR pumpkin lines (Table 3).

The PMR pumpkin lines described have been used widely in commercial pumpkin breeding and production. Increased resistance to powdery mildew generally results in increased yield, increased petiole strength, and decreased reliance on fungicide applications. The PMR pumpkin lines express substantial resistance to powdery mildew in all of the evaluated portions of the plant. The lines with the highest levels of resistance overall were NY14-555, NY14-556, NY14-557, NY14-558, NY15-560, NY14-564, NY14-567, and NY14-568. These lines also exhibited a wide range of variation in the other measured traits, including number of fruit per plant, fruit weight, fruit shape, plant growth habit, and maturity. The PMR pumpkin lines remain an important resource for the development of powdery mildew–resistant pumpkin cultivars and are well suited for pure line cultivar or hybrid development.

Seeds samples of the PMR pumpkin lines are available for distribution. Requests should be made to Michael Mazourek at mm284@cornell.edu.

Pedigree of powdery mildew–resistant (PMR) pumpkin lines. PMR pumpkin lines are identified with two or more numbers: the first is the year, the second is the plot, and the third, if present, is the plant within the plot. Two consecutive arrows indicate multiple generations of inbreeding. Selection for powdery mildew resistance occurred in every generation, beginning in 1990 after the first cross to ‘Spirit’. 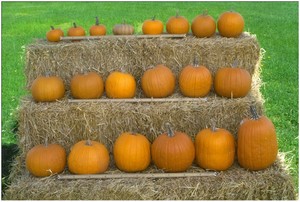 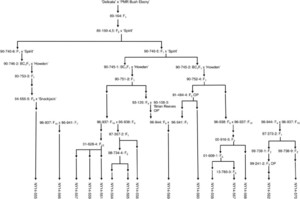