Seeds of native plants are needed for rangeland restoration in the Intermountain West due to increasing rates of disturbance caused by non-native plant invasions and more frequent wildfires (Balch et al., 2013; Liu and Wimberly, 2015). Postfire restoration can stabilize soils and reduce re-establishment of invasive annuals, although restoration effectiveness depends on techniques and seed mixes (Robichaud et al., 2000). A recent synthesis showed that restoration of forbs (nonwoody perennials) is critical for rehabilitating habitat for pollinators and wildlife, such as the greater sage grouse (Dumroese et al., 2015). A number of promising native forb species have been identified for rangeland restoration purposes, but relatively little is known about the cultural practices required for seed production of these plants (Shaw and Jensen, 2014).

Several members of the genus Lomatium, including L. dissectum (fernleaf biscuitroot), L grayi (Gray’s biscuitroot), L. nudicaule (barestem biscuitroot), and L. triternatum (nineleaf biscuitroot), are recognized as important for use in wildland restoration in the Intermountain West (Dumroese et al., 2015). Lomatium suksdorfii is of interest since it is both rare and a potential source of pharmaceutical compounds. These species are native to the western United States and are long-lived perennials with yellow, purple, or green/brown flowers. The shoot develops from the crown of a large taproot in early spring using the natural moisture from snow melt and spring rain. Vegetative growth, flowering, and seed set are complete by late spring to early summer. The leaves dieback after seed set, usually in midsummer. Lomatium species are dormant from late summer through winter and do not resume growth with fall rains.

Many Lomatium species were used by Native Americans for their food and medicinal properties (Shock et al., 2012a, 2012b; Tilley et al., 2010a, 2010b), and evaluation and use of such species as L. suksdorfii (Suksdorf’s desertparsley) continue today (Lee et al., 1994). Except for L. suksdorfii, which is found only in south-central Washington and north-central Oregon, these species are widespread in the Intermountain West. Lomatium species grow in scattered to occasionally dense stands on well-drained coarse- to fine-textured soils and on scablands, rocky slopes, drainages, and open ridges.

Large-statured and widely distributed Lomatiums are valued as restoration species because they are among the earliest wildflowers to green up in late winter or spring. They provide a source of forage for wildlife (elk, deer, and antelope) and domestic livestock (sheep and cattle) (Ogle and Brazee, 2009). Barnett and Crawford (1994) reported that sage-grouse hens ate Lomatium leaves and stems, while Drut et al. (1994) found that sage-grouse chicks also consumed Lomatium. The Lomatium species were not identified in either study. Lomatiums are also used by birds, small mammals, pollinators, and other insects (Thompson, 1998). Lomatium species compete with non-native annuals such as Bromus tectorum (cheatgrass) because of their early spring growth and deep taproot system (Parkinson et al., 2013; Tilley et al., 2010a, 2010b).

Commercial seed production of Lomatium is needed for use in rangeland restoration plantings in the Intermountain West, but these plants are rarely cultivated, and cultural practices for seed production are largely unknown. A major limitation to economically viable commercial production of Lomatium seed is achieving stable and consistent seed production from year to year. In native rangelands, natural variation in spring rainfall and soil moisture results in highly unpredictable water stress at flowering, seed set, and seed development, which for many seed crops is known to compromise seed yield and quality. The seed yield response of L. dissectum to irrigation has been reported previously without considering the effect of precipitation (Shock et al., 2012b, 2015).

Native forbs are not well adapted to row crop production practices. Supplemental water can be provided by sprinkler or furrow irrigation systems, but these irrigation systems risk encouraging weeds and fungal pathogens. Subsurface drip irrigation can reduce wetting of the soil surface and could reduce weed and disease pressure.

On 25 Nov. 2009, seed of L. nudicaule and L. suksdorfii was planted in the same field as the other Lomatium species in four rows spaced 76 cm apart using the small-plot grain drill. All seed was planted on the soil surface with 65–100 seeds/m of row. After planting, sawdust was applied in a narrow band over the seed row at 26 g·m−1 of row, and the beds were covered with rowcover. Each rowcover (N-sulate Deluxe Plus 1 oz; DeWitt Co., Inc., Sikeston, MO) covered two rows and was applied with a mechanical plastic mulch layer. The field was irrigated for 24 h on 2 Dec. 2009 due to very dry soil conditions. 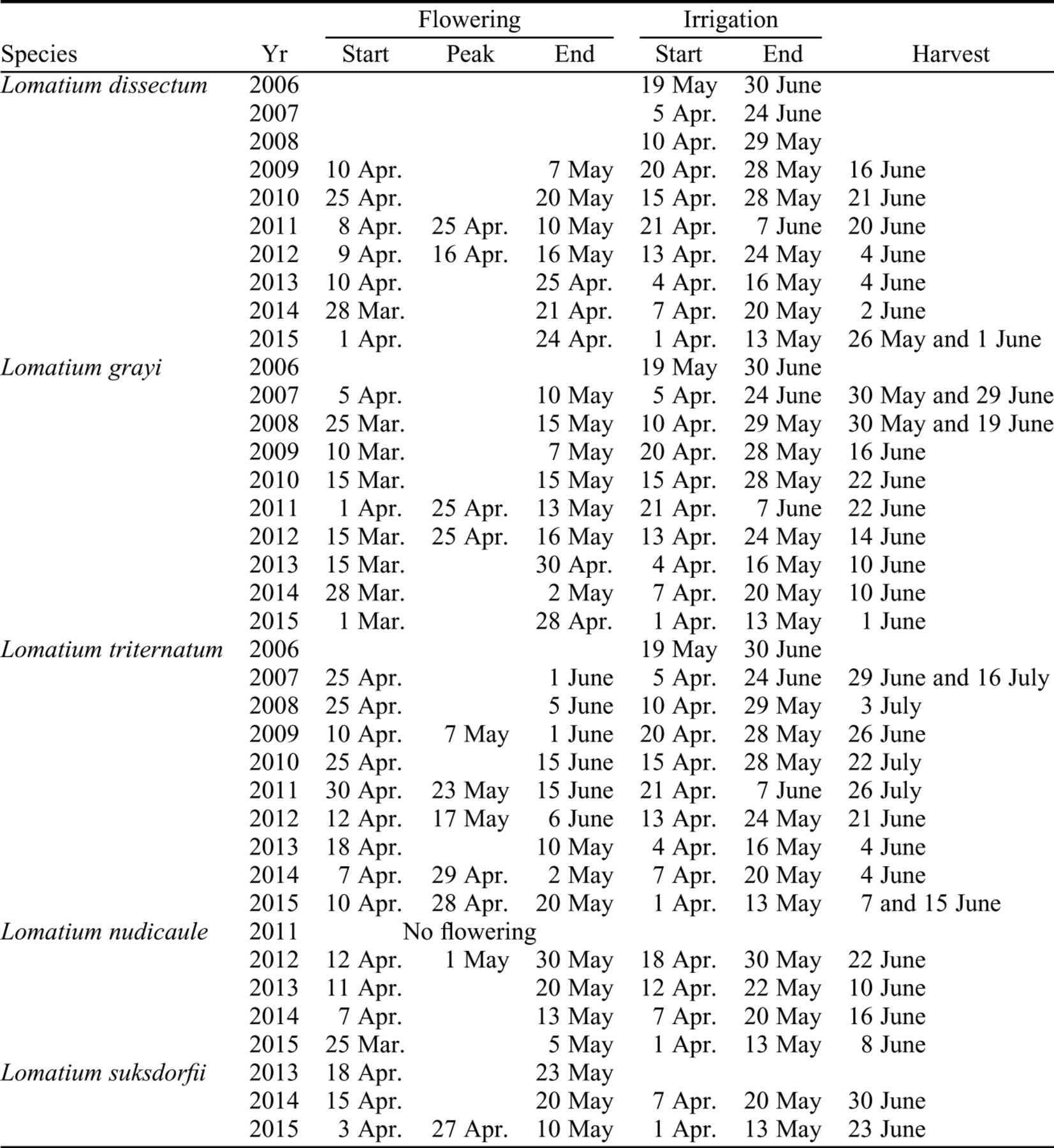 Seed yield (y, kg·ha−1) in response to irrigation or irrigation plus precipitation (x, mm/season) was estimated by the equation y = a + b·x + c·x2. For the quadratic equations, the amount of irrigation (xʹ) that resulted in maximum yield (yʹ) was calculated using the formula xʹ = −b/2c, where a is the intercept, b is the linear parameter, and c is the quadratic parameter. For the linear regressions, the highest seed yield for a species in a given year was based was on the highest measured average seed yield.

Lomatium dissectum began flowering and producing seed in 2009, the 4th year after fall planting in 2005 (Tables 2 and 3). Flowering and seed production began for L. grayi and L. triternatum in the 2nd year (2007), L. nudicaule in the 3rd year (2012), and L. suksdorfii in the 4th year (2013) after fall planting (Tables 2 and 4–6). Although there were tremendous variations in seed yields over species and years, general tendencies emerged for the mean seed yields for each species and irrigation treatments (Table 7).

Regression analysis for Lomatium dissectum seed yield (y, kg·ha−1) in response to irrigation (x, mm/season) using the equation y = a + b·x + c·x2 in 2009–15, and 7-year average. For the quadratic equations, the amount of irrigation that resulted in maximum yield was calculated using the formula: x = −b/2c, where b is the linear parameter and c is the quadratic parameter. 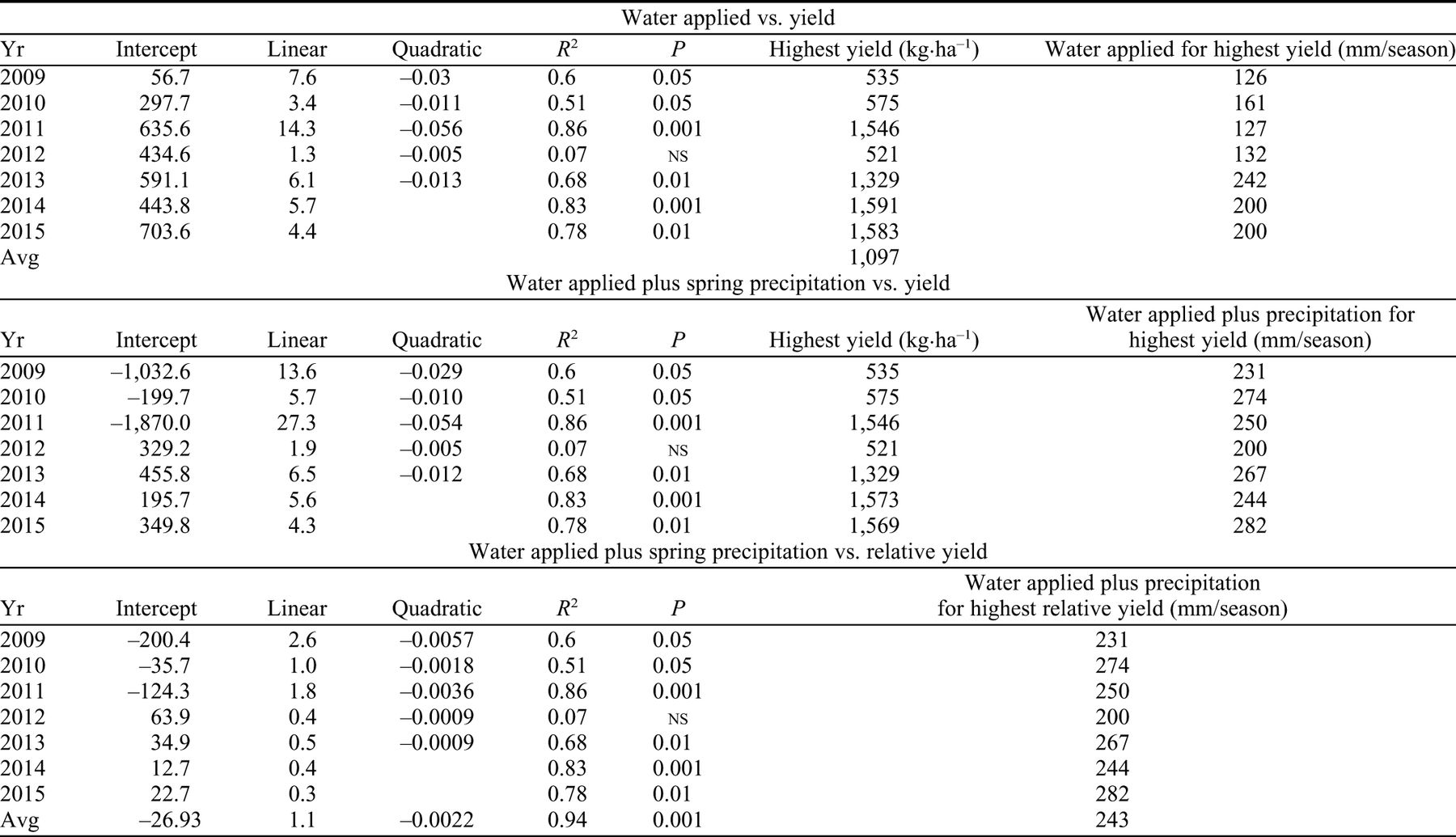 Regression analysis for Lomatium grayi seed yield (y, kg·ha−1) in response to irrigation (x, mm/season) using the equation y = a + b·x + c·x2 in 2007–15, and 9-year averages. For the quadratic equations, the amount of irrigation that resulted in maximum yield was calculated using the formula: x = −b/2c, where b is the linear parameter and c is the quadratic parameter. 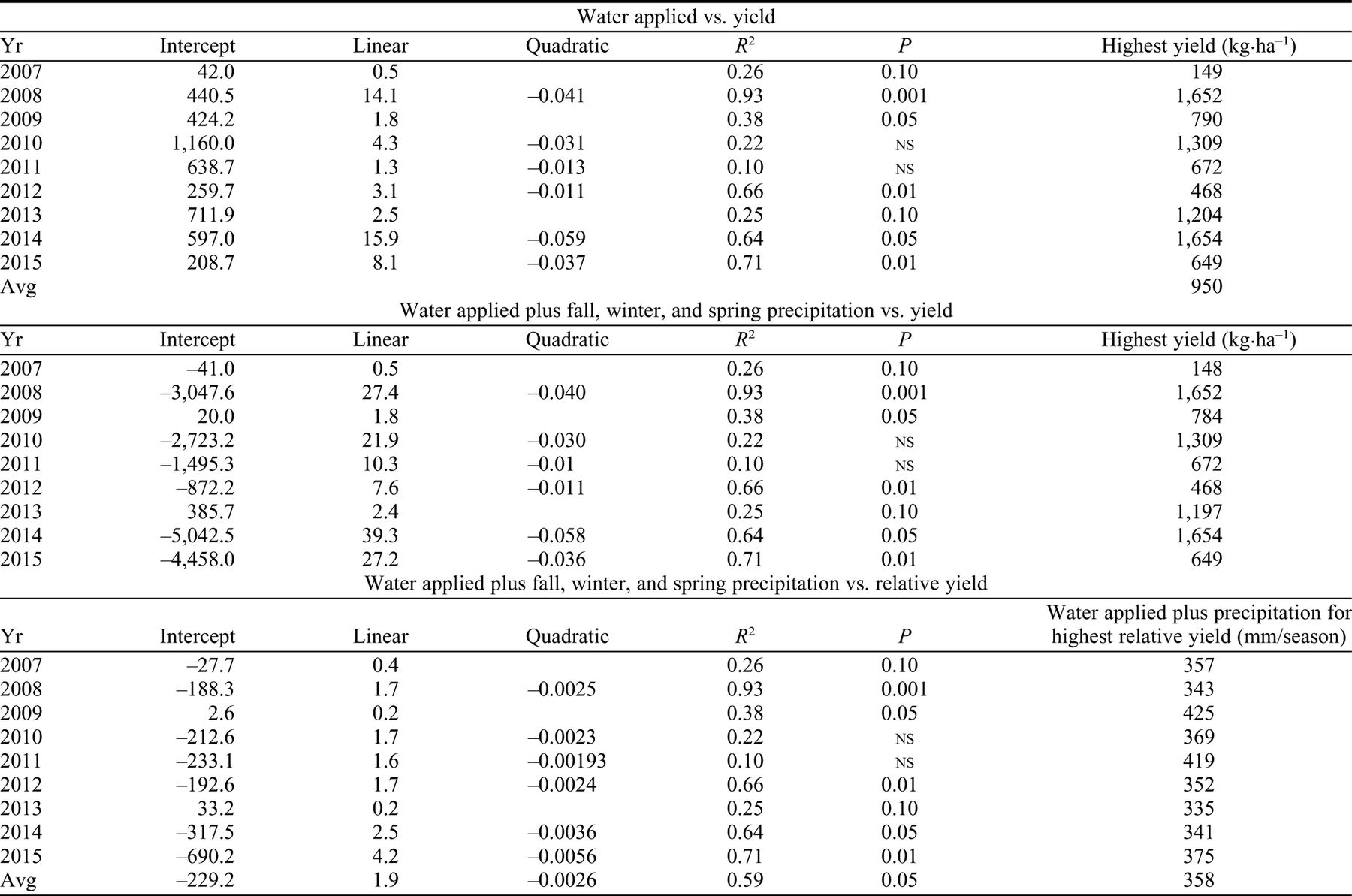 Regression analysis for Lomatium triternatum seed yield (y, kg·ha−1) in response to irrigation (x, mm/season) using the equation y = a + b·x + c·x2 in 2007–15, and 9-year average. For the quadratic equations, the amount of irrigation that resulted in maximum yield was calculated using the formula: x = −b/2c, where b is the linear parameter and c is the quadratic parameter. 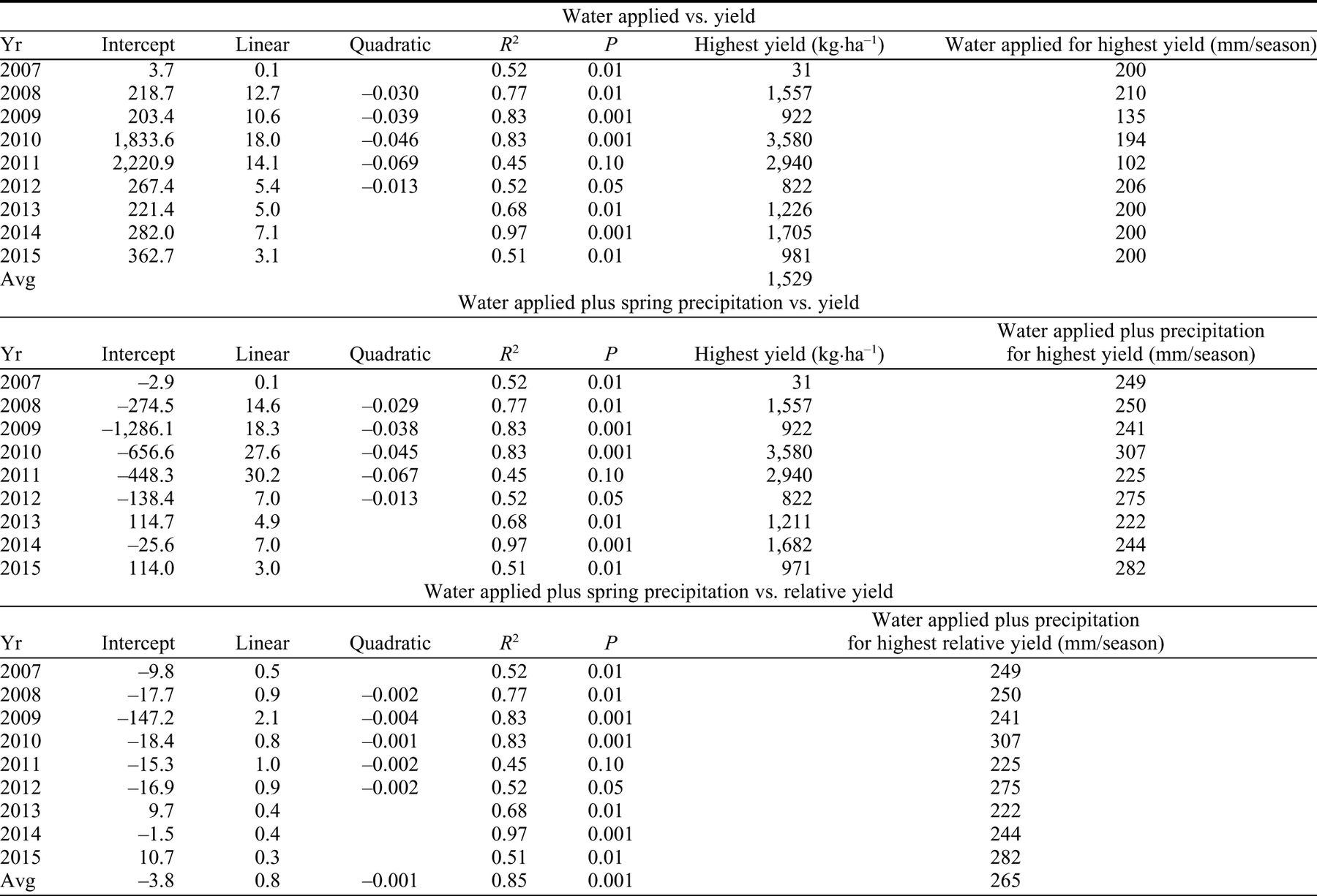 Regression analysis for Lomatium nudicaule and L. suksdorfii seed yield (y, kg·ha−1) in response to irrigation (x, mm/season) using the equation y = a + b·x + c·x2 in 2012–15. For the quadratic equations, the amount of irrigation that resulted in maximum yield was calculated using the formula: x = −b/2c, where b is the linear parameter and c is the quadratic parameter. Lomatium nudicaule failed to respond to irrigation.

Seed yields of L. dissectum exhibited a quadratic response to irrigation amount in 2009–13 (Table 3; Figs. 1–3). The quadratic response to irrigation in 2012 was not statistically significant. Seed yield of L. dissectum exhibited linear responses to irrigation rate in 2014 and 2015. The amount of water applied for maximum seed yield, calculated from the regression equations, ranged from 126 to 242 mm per season. Seed yields were estimated to be highest with 200 to 282 mm of total applied water plus spring precipitation. The highest yields averaged 1097 kg·ha−1 and ranged from 521 to 1573 kg·ha−1. Averaged over 7 years, relative seed yield was highest with 243 mm of applied water plus spring precipitation (Fig. 3).

Over 4 years of production, seed yields of L. nudicaule showed no significant response to water applied (Table 6). Maximum yields averaged 505 kg·ha−1 and ranged from 139 to 789 kg·ha−1, depending on the year.

Seed yields of L. suksdorfii did not respond significantly to water applied in 2014, the first year of seed production (Table 6). Seed yields in 2015 showed a linear response to irrigation. Seed yields were estimated to be maximized by 282 mm of total applied water plus spring precipitation in 2015. Maximum yields averaged 1086 kg·ha−1 and were 205 kg·ha−1 in 2014 and 1950 kg·ha−1 in 2015. The higher seed yield in 2015 may be related to advanced plant maturity and greater stature than in 2014.

There are few published studies examining seed production of native plants in response to irrigation in arid regions. In a west-central Texas, area that receives 530 mm of annual precipitation, Petersen and Ueckert (2005) found that seed production of Atriplex canescens (fourwing saltbush) did not respond to either 400 mm of irrigation in one year or 200 mm of irrigation the next year. In the Owens Valley, CA, with annual precipitation of 113 mm, Sarcobatus vermiculatus (greasewood) seed yields were significantly higher when irrigated (Breen and Richards, 2008). These studies were not designed to determine optimum amounts of irrigation for seed yield.

In this study, all Lomatium species tested, except L. nudicaule, responded to irrigation with increased seed yields. For the three species tested for 7–9 years (L. dissectum, L. grayi, and L. triternatum), seed yields were increased significantly by irrigation. Seed yields of L. suksdorfii also increased by irrigation in 2015. The amount of irrigation and precipitation needed for maximum Lomatium seed yields in this study (200–400 mm/year) was substantially lower than irrigation plus precipitation requirements for row crops in the Treasure Valley of Oregon (500–800 mm/year, AgriMet, 2016). Although Lomatium species are perennials, they complete their cycle from sprouting to seed harvest by mid-June, thus their irrigation requirements would be expected to be lower. However, irrigation requirements for Lomatium are low even when compared with an early season crop such as winter wheat (Triticum aestivum), which has an average water requirement of 633 mm in the Treasure Valley.

Studies of cultural practices for native plants are critical to increasing seed production and availability of plant material used in restoration of ecosystems in the Intermountain West. As restoration needs increase, the economic opportunities for native plant seed growers will also increase. Developing in-depth knowledge on seed production practices will support the native seed industry in the future.

Seed yield response of Lomatium dissectum to water applied in 2009–15.

Seed yield response of Lomatium dissectum to water applied plus spring precipitation in 2009–15.

Seed yield response of Lomatium grayi to water applied in 2007–15.

Seed yield response of Lomatium grayi to water applied plus fall, winter, and spring precipitation in 2007–15.

Seed yield response of Lomatium triternatum to water applied in 2007–15.

Seed yield response of Lomatium triternatum to water applied plus spring precipitation in 2007–15. 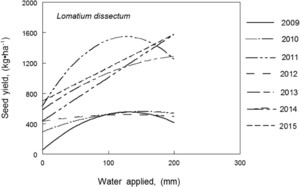 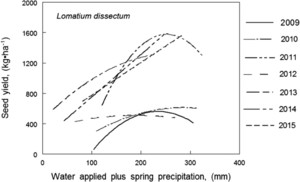 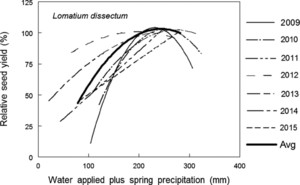 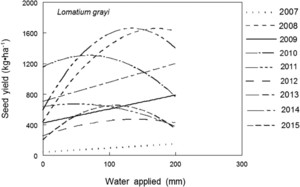 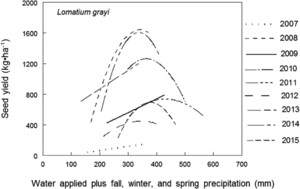 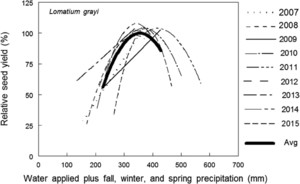 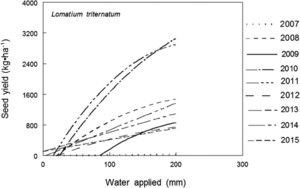 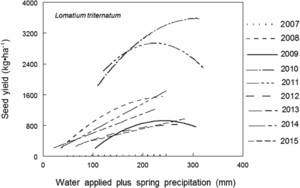 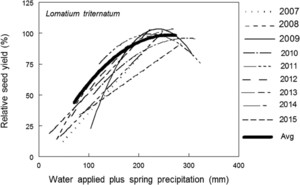