‘Grandarosa’ is a new, short-day strawberry cultivar bred at the Research Institute of Horticulture, Skierniewice, Poland. This cultivar has a 50% pick date of 5–6 d later than ‘Honeoye’ and a longer harvest period, similar to ‘Elsanta’, which are both commercially cultivated in Poland. The marketable yield of ‘Grandarosa’ in the field is similar to that of ‘Honeoye’ and higher than that of ‘Elsanta’. The berries of ‘Grandarosa’ are large, firm, tasty, and very attractive in appearance and are suitable for the fresh market. ‘Grandarosa’ plants are less susceptible to powdery mildew (caused by Podosphaera aphanis) than plants of ‘Elsanta’ and are more tolerant to verticillium wilt (caused by Verticillium dahliae) compared with ‘Honeoye’ and ‘Elsanta’.

‘Grandarosa’ was selected in 2005 among 79 seedlings received from the crossing of ‘Granda’ × ‘Camarosa’ (Fig. 1) generated at the Fruit Breeding Department of the Research Institute of Horticulture (formerly the Research Institute of Pomology and Floriculture) by A. Masny and E. Żurawicz. The parental forms were crossed in 2003. Both parental forms differ widely in terms of pedigree, geographical origin, and many other agronomic features. Granda is a short-day type, late cultivar, obtained in Italy (Cesena, Po Valley) from the cross of ‘Sel. 83.5.8’ (78.65.1 × Etna) × ‘Marmolada®Onebor’ made in 1989. This cultivar was selected in 1991 and introduced for commercial production in Italy in 1999 (Faedi et al., 2009). ‘Granda’ produces large and regular-shaped conical fruit. The skin is orange red, homogenous in color, and glossy. The flesh is bright red in color, firm, and very tasty. Other advantages of ‘Granda’ in Polish agroclimatic conditions include high productivity and good winter hardiness. According to Finn (2000), ‘Granda’ is tolerant to soilborne pathogens and resistant to Colletotrichum acutatum. The main disadvantages of this cultivar are susceptibility to Alternaria alternata and Xanthomonas fragariae (Finn, 2000). Camarosa, a medium early-fruiting, short-day paternal cultivar of ‘Grandarosa’ was originated in 1988 from the cross ‘Douglas’ × Cal 85.218-605 made at the University of California by V. Voth and R.S. Bringhurst. This cultivar was selected in 1989 and introduced for commercial cultivation in United States in 1992 (Daubeny, 1994). The fruit of ‘Camarosa’ have flat conical shapes (Daubeny, 1994), with intensive red and glossy skin that is darker than the fruit of ‘Elsanta’ (Masny and Żurawicz, 2005). The fruit flesh is also darker than that of ‘Elsanta’. In earlier trials conducted in Poland, the fruit of ‘Camarosa’ were firmer and larger than those of ‘Elsanta’, weighing 13 to 15 g on average (Żurawicz et al., 2004). The plants of ‘Camarosa’ are vigorous, moderately susceptible to common leaf spot (caused by Mycosphaerella fragariae), and slightly susceptible to powdery mildew (Daubeny, 1994). However, in Polish climatic conditions, these plants are also slightly susceptible to leaf scorch (caused by Diplocarpon earliana) and powdery mildew (caused by Podosphaera aphanis) (Masny and Żurawicz, 2005). In cold and snowless winters, ‘Camarosa’ plants suffer from winter injuries and require protection against frosts, thus in Poland, ‘Camarosa’ is less productive than ‘Elsanta’ (Żurawicz et al., 2004). Recent studies have shown that ‘Camarosa’ is susceptible to Fusarium oxysporum and Macrophomina phaseolina, but resistant to Cylindrocarpon destructans, Gnomonia fructicola, Phoma exigua, Phytophthora cactorum, and Pythium ultimum (Fang et al., 2012) and tolerant to Phytonemus pallidus (Łabanowska et al., 2015). During the evaluation, ‘Grandarosa’ was tested as the selected breeding number T-03021-12.

Field trials using newly selected clones, including ‘Grandarosa’, were performed in the Pomological Orchard of the Research Institute of Horticulture, Skierniewice, Central Poland (lat. 51°959′ N, long. 20°139′ E) from 2008 to 2011. The standard cultivars used in the present experiment were Honeoye and Elsanta, both commonly grown in Poland. The experiment was established in the Spring 2008 in a random block design, with four replications. Each replication comprised 15 plants cultivated in single row spaced at 25 × 100 cm. In 2009–11, the plant habit and productivity, external and internal fruit quality, and plant severity to fungal diseases were assessed. The fruit were harvested two times per week and sorted into two categories: marketable (over 1.8 cm in diameter) and unmarketable (below 1.8 cm in diameter or misshapen). The fruit ripening time was expressed as the Faedi Index, indicating the number of days from January 1 to harvesting 50% marketable yield (calculated by multiplying each picking day ordinal number by the yield of that day and dividing the sum of products by the total yield; Faedi et al., 1988) The average fruit weight was calculated as the ratio of the yield and the number of healthy fruits collected. Fruit firmness was determined using the INSTRON 5542 penetrometer (Instron Corporation, Canton, MA) based on three samples of 20 fruit randomly selected from the marketable fruits collected during the third, fourth, and fifth harvest. The internal fruit quality (soluble solids, total acidity, dry matter, ascorbic acid, and anthocyanin content) was assessed based on samples of fruit randomly collected during the third, fourth, and fifth harvest and frozen at −25 °C until further processing. Before fruit quality characterization, fruits were disintegrated in solid CO2 at −78.5 °C with Blixer 3 (Robot Coupe, France). For high-performance liquid chromatography (HPLC) determinations, samples were additionally disintegrated in liquid N2 at −195.8 °C using A11 Basic (IKA Werke, Germany) mill. Soluble solids were determined using refractometer RE 50 (Mettler Toledo, Japan). Total acidity was analyzed according to the Polish Standard (PN-90/A-75101/04) using DL58 automatic titrator (Mettler Toledo, Switzerland). Dry matter was determined also according to the Polish Standard (PN-90/A-75101/03) using vacuum dryer VO 400 (Memmert, Germany) at 70 °C at 30 mbar vacuum until stable weight. Ascorbic acid content was analyzed after disintegrated fruit extraction with 6% metaphosphoric acid at 1 to 4 °C. After 2-min homogenization with Ultra Turrax T35 Basic T25 (IKA-Werke), the sample was transferred into a volumetric flask, filled up with metaphosphoric acid and filtered. After dilution and repeated filtration, the content of ascorbic acid was determined using HPLC method with Agilent HP 1100 chromatograph (Waldbronn, Germany) with DAD detector at 244 nm; two interlinked columns Supelco LC-18 (250 × 4 mm); 30 °C; mobile phase: 1% phosphoric buffer (pH = 2.5), flow rate: 0.8 mL·min−1.

Plant severity to common leaf spot, leaf scorch, and powdery mildew was evaluated using a 0 to 4 ranking scale, where 0 means no visible symptoms of disease and 4 means plant withering as a result of heavy pathogen infection.

In Central Poland, the bloom period of ‘Grandarosa’ is typically during the first week of May, whereas the fruit harvest starts at the beginning of June (on average) and ends by mid-July. The Faedi Index for this cultivar is ≈168 d that is 1–2 d later compared with ‘Honeoye’ and ‘Elsanta’ (Table 1). Thus, Grandarosa is considered a midseason cultivar. Under the climatic conditions of Central Poland, a marketable yield of ‘Grandarosa’ is similar to ‘Honeoye’ but higher than ‘Elsanta’ (Table 1). This cultivar is also much more productive than its ancestor ‘Camarosa’, which in Poland produces only low to medium yields (Żurawicz et al., 2004).

The first berries of ‘Grandarosa’ are irregular, primarily long-wedge shaped, with pronounced edges. Subsequent berries are regular, conical or long conical, and much larger than fruits of ‘Elsanta’ and ‘Honeoye’ (Table 1). The long conical fruit shape is typical for ‘Camarosa’ (Daubeny, 1994), whereas the large fruit size is likely inherited from ‘Granda’, a producer of large fruits. In previous studies, ‘Granda’ was characterized by the significant positive values of the general combining ability effects for this trait (Masny et al., 2009). The skin color of ‘Grandarosa’ is orange-red, uniform, and glossy, however, the first fruit can be brighter on the top. Yellow and red achenes are inserted below the fruit surface level, making the fruit very attractive. The flesh is orange-red, and the internal cavity is either absent or weakly expressed. The calyx is bright green, and firmly attached to the fruit, with a diameter much larger than that of the fruit and moderately wide, elliptic sepals slightly raised upward (Figs. 2 and 3). The fruit is significantly firmer than that of ‘Elsanta’ and ‘Honeoye’ and sweeter than that of ‘Honeoye’ (Table 1). Our multiyear assessment (data not presented) also showed that ‘Grandarosa’ fruit is aromatic and tasty. Although ‘Grandarosa’ is significantly lower in anthocyanins than ‘Honeoye’ and ‘Elsanta’, these fruits contain more ascorbic acid (vitamin C) and soluble solids (Brix) than ‘Honeoye’, but are similar with ‘Elsanta’ (Table 2). In recent studies (realized in the frame of EUBerry project; seventh Framework Program; EUBerry, 2013), we showed that the fruit of ‘Grandarosa’ is moderately rich in total phenols (293 mg/100 g) and citric acid (679.8 mg/100 g), but low in total antioxidant capacity (4.45 mg/Trolox g) and ellagic acid (17.8 mg/100 g). These observations show that the shelf life of the fruit is also good (EUBerry, 2013). No changes in fruit glossiness and color were detected, and only a slight drooping of the calyx was observed after keeping the mature fruit at room temperature (≈22 °C) for 48 h compared with fresh fruit.

Internal fruit quality of ‘Grandarosa’ plants grown in a field trial at Skierniewice, Poland (average for 2010–11).

Similar to maternal ‘Granda’ (Faedi et al., 2002), ‘Grandarosa’ plants are very vigorous, with an upright, globose growth habit and moderately dense foliage (Fig. 4). The leaves are quite long, with large, slightly undulating blades. The upper surface of the leaflets is light green and medium glossy. The terminal leaflet is oval shaped, longer than wide, with a rather obtuse base and crenate margins. The petioles have numerous, horizontal hairs. The inflorescences are produced on long peduncles, and the flowers develop at the level of the canopy. The flowers are large, numerous, and hermaphroditic, with a calyx diameter greater than that of the corolla. The corolla has five to seven overlapping white petals, which are broader than long. ‘Grandarosa’ plants grow freely, producing a moderate to vast number of daughter plants. The runners are dense and pubescent, with moderate anthocyanin coloration. The plants produce a few new crowns yearly, on which the flowers for the next season are formed.

In Polish climatic conditions, ‘Grandarosa’ overwinters much better than the control ‘Elsanta’. ‘Grandarosa’ plants were only slightly damaged by freezing in the Winter 2011–12, when the minimal temperatures reached −30 °C and snow cover was thin (Masny and Żurawicz, 2013). During several years of observations, few buds or flowers were damaged by late spring frosts. Based on multiyear field assessment, we also observed that severity of powdery mildew infection on ‘Grandarosa’ plants is significantly lower than on plants of ‘Elsanta’ (Table 3). However, slight symptoms of leaf scorch observed during these studies were similar for ‘Grandarosa’, ‘Elsanta’, and ‘Honeoye’. We also observed that ‘Grandarosa’ plants are less susceptible to verticillium wilt (Table 3) compared with ‘Honeoye’ and ‘Elsanta’, which are susceptible to V. dahliae (Masny and Żurawicz, 2009). Moreover, the studies conducted in 2012–13 at the Entomology Laboratory of the Research Institute of Horticulture revealed a low number of strawberry mites on the leaves of ‘Grandarosa’ (0.1–2.0 motile forms per leaf), while on ‘Elsanta’ and ‘Honeoye’ the number of mites reached 10 to 20 motile forms per leaf, depending on the season (Łabanowska et al., 2015), suggesting that ‘Grandarosa’ is more tolerant to this pest than ‘Elsanta’ and ‘Honeoye’.

Severity of ‘Grandarosa’ plants grown in a field trial at Skierniewice, Poland to fungal diseases (average for 2009–10).

‘Grandarosa’ was admitted to the Polish National List of Fruit Plant Varieties through the Polish Research Center for Cultivar Testing (in Polish Centralny Ośrodek Badania Odmian Roślin Uprawnych), and in Europe, this cultivar is protected through the EU Plant Variety Rights (CPVO Decision No. UE 39554). Certified ‘Grandarosa’ plants are being propagated through several licensed nurseries in Poland.

Pedigree of ‘Grandarosa’ strawberry. The female parent is listed on the upper side of each bifurcation. 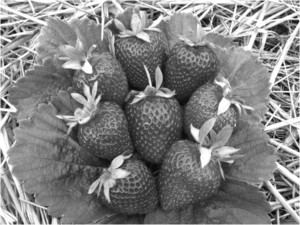 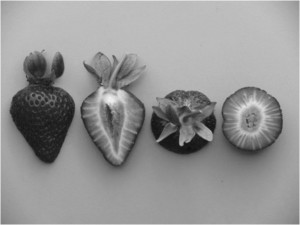 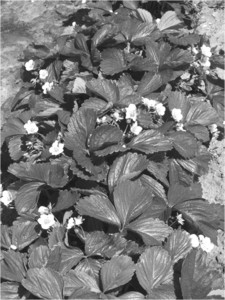