Norteña is a new pecan cultivar originated as an open-pollinated seedling tree that was selected for its outstanding behavior from a native stand of trees collected near the Conchos River in the state of Chihuahua, Mexico. ‘Norteña’ has been evaluated as ‘Selection 19-20’ after being grafted on five seedling—trees planted at 10 × 10 m distance in the 1980s at INIFAP’s Experiment Station of Zaragoza Coahuila (lat. 28°29′30″ N; long. 100°55′10″ W). ‘Norteña’ has been registered in the Servicio Nacional de Inspección y Certificación de Semilla (SNICS) and, recently, it has been budded in commercial orchards in the states of Chihuahua, Coahuila, and Sonora, Mexico. Because of its low vivipary incidence and downy spot (Mycosphaerella caryigena) resistance, this cultivar constitutes an important resource for pecan growers located in wet regions where these problems are often.

‘Norteña’ is protandrous with pollen shed and pistillate flower receptivity similar in timing to ‘Western Schley’ (Table 1). Trees are upright in growth habit and develop strong limb angles. Selective limb pruning (Worley, 1991) has been done in January after “off” years by eliminating one or two branches of ≈10–12 cm (five inches in diameter). Bud break of ‘Norteña’ begins around the third week of March, similar to what observed in ‘Western Schley’ (Table 1). In 2007, 2008, and 2009, ‘Norteña’ nuts matured on 22, 20, and 23 Sept., respectively, and they were ready to harvest ≈1 week before ‘Western Schley’. Yield data indicate that ‘Norteña’ is a good producer; in a 7-year period, it averaged 18.0 kg per tree (Table 2). Alternate bearing index (I), as calculated according to Pearce and Doberšek-Urbanc (1967), was low (0.39), at least during this initial production period of the trees, which should be a successful result of good management and appropriate cultivar combination (Conner and Worley, 2000; Lagarda et al., 1998; Wood et al., 2003). Nut weight average across the 7-year period was 7.9 g. Nuts shell out easily into full halves, the partition wall is thin, and the basal cleft is almost absent. Percentage kernel is always between 58.1% and 58.6% (data not shown). Kernels are cream to golden in color (Fig. 1) and have wide, non-trapping dorsal grooves and rounded dorsal ridges. Vivipary in ‘Norteña averaged 2% in a 7-year period, compared with 11% observed in western Schley (data not shown). This trend toward low vivipary supports the recommendation of using ‘Norteña’ in Nuevo Leon, Coahuila, Durango, and Sonora, Mexico, as well as other pecan growing regions where vivipary is common, and can reach values as high as 40%. ‘Norteña’ has shown resistance to downy spot (Table 3) and could be a suitable cultivar for wet regions where other pecan cultivars are susceptible to this disease that reduces nut production and quality (Lagarda et al., 1998). Also, ‘Norteña’ has shown good tolerance to pecan scab (Fusicladium effusum Wint.) (Table 3).

Dates of the main phenological stages for ‘Norteña’ compared with ‘Western Schley’ pecan observed at Zaragoza, Coahuila, Mexico in 2007, 2008, and 2009. ‘Norteña’ trees were grafted on open-pollinated rootstocks in 1987.

Yield (kg/tree) and alternate bearing index (I) of pecan trees grafted in 1987 with ‘Norteña’ and ‘Western Schley’ grown at the Experiment Station of Zaragoza, Coahuila, Mexico.

Leaf downy spot incidence and fruit scab ratings of ‘Norteña’ and ‘Western Schley’ pecan evaluated between 2007 and 2009. Trees were grafted in 1987 and grown at the Experiment Station of Zaragoza, Coahuila, Mexico.

Norteña was released in June 2010 and is currently being propagated in private nurseries to be planted in new orchards or topworked on older trees. Genetic material of ‘Norteña’ was deposited in the National Plant Germplasm bank at Tepatitlan, Jalisco, Mexico, where it will be available for future research and breeding of new cultivars.

Nuts and kernels of the ‘Norteña’ pecan. Scale is in centimeters. 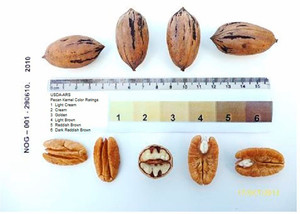