Search for other papers by Mohammad R. Sabzalian in
ASHS
Google Scholar
PubMedClose

The genus Eustoma belongs to Gentianaceae family and includes two species, i.e., E. exaltatum L. and E. grandiflorum (Raf.) Shinn, commonly known as Eustoma, lisianthus, prairie gentian, Texas bluebell (Dole and Wilkins, 2004). Lisianthus is a moderately cold-tolerant biennial plant and is grown as an annual for commercial purposes (Roh and Lawson, 1988). Besides as a cut flower, lisianthus is also available as potted or bedding plants (Dole and Wilkins, 2004). Considering lisianthus as a major cut flower in many countries (Anderson, 2007), its greenhouse production, especially using soilless culture systems, is more feasible. Several factors, particularly plant nutrition, may be involved in successful production of this flower in soilless culture systems. Among various nutrients, calcium plays an essential role in the growth, productivity, and quality of greenhouse-grown cut flowers. Calcium is absorbed as Ca2+ ions. It uses passive transport channels and has very low mobility in plants (Barker and Pilbeam, 2007; Fageria, 2009; Mills and Jones, 1996). After absorption from soil colloids, calcium moves toward the roots through diffusion or mass movement and is absorbed by unsuberized root tips (Barker and Pilbeam, 2007). Therefore, any damage to root tips, caused by nematodes, chemical changes, or tension, can reduce calcium absorption. Both apoplastic and symplastic pathways are involved in the transfer of calcium from the soil solution to the vascular system (Mills and Jones, 1996). Calcium easily enters the apoplast and interchangeably adheres to cell walls and outer surface of cytoplasm membrane (White and Broadley, 2003). Numerous factors, such as metabolism processes, can restrict calcium absorption by the cytoplasm. Moreover, the transport of calcium from one cell to another and within the phloem occurs very slowly. Calcium seems to be the only element, except for boron, which performs most of its activities outside the cytoplasm, i.e., inside the apoplast. Since calcium uptake by plant roots is directly related with transpiration rate, any factor that affects transpiration can also influence calcium uptake (Marschner, 1995). Certain environmental changes, such as increased moisture inside the greenhouses, especially in winter, can alter plant transpiration rates and thus calcium uptake and transport. Calcium deficiency will lead to various physiological disorders such as the bending of the peduncle and breaking of the stem, particularly in gerbera. Such symptoms usually manifest following decreased transpiration from the aerial parts of the plant (Gerasopoulos and Chebli, 1999). Decreased transpiration rates over long periods of cloudy weather will cause calcium deficiency and its symptoms burnt leaf tips and margins will appear in lisianthus (Dole and Wilkins, 2004). Although such a disorder will be initially observed during budding, persistent deficiency will lead to the bending and drooping of the peduncle. Spraying different organic and inorganic sources of calcium, e.g., Ca(NO3)2.4H2O, are applied during winter or early spring production to prevent calcium deficiency (Dole and Wilkins, 2004). Recently, Ca-amino acid chelates have been synthesized and distributed to supply different metal nutrients such as zinc and iron (Ghasemi et al., 2012, 2013). Amino acids can form a relatively stable complex with calcium and thus enhance its availability. It has been shown metal-amino acid chelates can easily pass through root cell wall pores (Ghasemi et al., 2013). Infiltration of these chelates into plant tissues and their slow degradation will prevent the binding of calcium with the anionic region of plant cell membranes (Saftner et al., 2003). Therefore, this study was performed to investigate first how different sources of calcium affect lisianthus production and then to study the effects of synthetic calcium amino acid chelates and CaCl2 on qualitative and quantitative features of lisianthus cut flowers.

Lisianthus seedlings (‘Cinderella Lime’) were purchased from Moshkelgosha Greenhouse (Isfahan, Iran). In Feb. 2013, the seedlings were transferred to the greenhouse at the Department of Horticulture (Isfahan University of Technology, Isfahan, Iran). During the course of the study (5 months), the mean temperature in the greenhouse was maintained at 28 ± 4 °C in the day and 18 ± 4 °C at night. Moreover, the relative air humidity (measured by HYGRO TFA, Germany) was 50% to 70%, in a 16 ± 2 h light/8 ± 2 h dark photoperiod cycle. The mean light intensity [measured by an auto ranging light meter (CEM DT-1309 Professional Digital 40K FC Foot-Candle Meter 400 klx Light Luxmeter, China)] was 650–740 µmol·m−2·s−1 (average during the whole day). To ensure uniform conditions, seedlings with four to five pairs of leaves were selected and separately planted in 4-L pots containing a 1:1 volume ratio mixture of peatmoss and perlite. Moreover, a basic nutrient solution (half strength modified Johnson’s nutrient solution) was prepared using distilled water (Table 1) and applied for 15–20 d to equalize plant growth. Afterward, the plants were pinched above the sixth node (to facilitate the treatments), calcium nitrate (i.e., the calcium source) was eliminated from the nutrient solution, and ammonium nitrate was added to compensate for the eliminated nitrogen (Table 2). According to Table 2, in calcium treatments, the amount of calcium required by the plants was provided through hydrous CaCl2 and calcium amino acid chelates (2 mm). Ca amino acid chelates were prepared from Qom Zist Fanavaran-e-Novin Co. 11831, Iran. The electrical conductivity (measured by Az Temp/conductivity meter 86503, Taiwan) and acidity (measured by pH Laboratory 827 Metrohom, Switzerland) of the nutrient solution were 1.8–2 and 5.7–6.5 dS/m, respectively. Three months after transferring the seedlings into the pots, the flowering stems with at least two fully blossomed buds were cut (left a node on the stem). They were then moved to a container filled with distilled water and qualitative and quantitative measurements were performed. Other characteristics including diameter and number of flowers, diameter, length, number and, dry and fresh weight of flower stems were also measured. The presented data are the average of nine pots.

After separating the petals, the flowering stems and their leaves were dried at 70 °C for 48 h. The dried samples were ground and passed through a sieve (mesh size: 30 µm). The powders were then heated at 550 °C for 6 h and the resulting ash was collected. To obtain extracts, the crucibles were left to cool down and then 10 mL of 2 m hydrochloric acid (HCL) were added to the samples. The resultant solution was passed through a filter paper and the extract was diluted to 100 mL using distilled water. A Perkin-Elmer atomic absorption spectrophotometer (PerkinElmer 3030 Inc., Waltham, MA) was finally used to measure the calcium content of the flowering stems and their leaves (Volpin and Elad, 1991).

To perform postharvest evaluations, the flowering stems were harvested early in the morning. All stems were diagonally trimmed (under water) to 57 ± 2 cm. Two open flowers and four flower buds were left on each stem and the remaining flowers and buds were removed (Shimizu-Yumoto and Ichimura, 2010). The stems were moved to the laboratory and kept in containers holding 500 mL distilled water. The containers were maintained at a temperature of 26 ± 2 °C, relative humidity of 60% ± 5%, and light/dark cycle of 16:8. The containers had been disinfected with a 0.1% sodium hypochlorite solution for 45 min. Vase life was defined as the period between the harvest and the time when the wrinkling and browning of the petals and bending of the peduncle started. Fresh weights of nine stems per treatment were recorded every second day for 14 d. The distilled water was also replaced every 2 d (Shimizu-Yumoto and Ichimura, 2010). The flower stem weights on the first and 14th days were finally subtracted and the reduction was reported in percentages.

The experiment composed three replicates of randomized complete blocks. Since each treatment consisted of five pots (each containing one plant), a total of 120 pots were prepared. The generalized linear model analysis of variance was conducted to assess the effects of different treatments. The mean values were also compared using the least significant difference (lsd). All analyses were performed with Statistical Analysis Software 2000 (SAS Institute, Cary, NC) at a significance level of P < 0.05.

Fresh and dry weight, number and length of the stems.

Compared with the control treatment, the application of calcium amino acid chelates significantly increased fresh and dry mass of the stems. In contrast, such an effect was absent when free amino acids and CaCl2 were applied. Fresh and dry weight of the flowering stems were 29.82% and 20.35% higher in calcium lysine-treated plants than in the control treatment (P < 0.05) (Table 3). In fact, among all calcium amino acid chelates and free amino acids, calcium lysine and free lysine had the greatest effects on increasing fresh and dry weight of the flowering stems. Addition of calcium, regardless of the source, was ineffective on stem number and length (Table 3).

Fresh and dry weight, length and number of stems in lisianthus (‘Cinderella Lime’) plants as affected by different sources of calcium in the nutrient solution.

Diameter of the flowers and stems.

The application of calcium amino acid chelates significantly increased calcium content of the stems compared with the control treatment. However, CaCl2 and free amino acids had no significant effects on stem calcium content. Shoot calcium concentration was 25.40% and 46.44% higher in plants received calcium methionine amino chelates than in the plants treated with CaCl2 and the control treatments, respectively (Fig. 4).

Vase life of lisianthus (‘Cinderella Lime’) plants as affected by different sources of calcium in the nutrient solution. 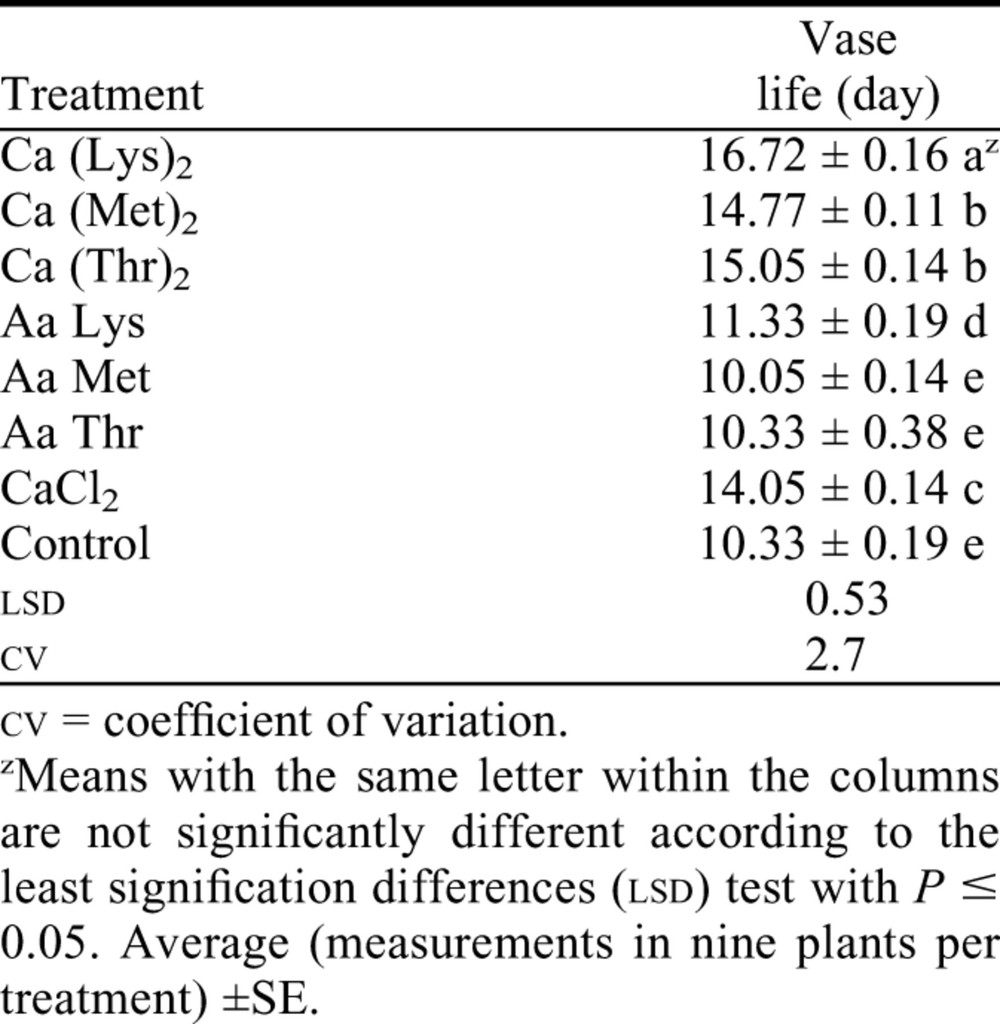 Lysine, methionine, and threonine, which are all essential to animal and human health, are used in the synthesis of calcium amino acid chelates (Dawson, 1959). According to our findings, calcium amino acid chelates could also substantially increase shoot fresh and dry weight (Table 3). Similarly, Albino-Garduno et al. (2008) reported high calcium concentrations to increase dry stem weight in gerbera (Amaretto and Darling varieties). Raising calcium concentration of nutrient solutions has also been suggested to elevate calcium levels in plant tissues and increase stem dry weight in lisianthus cut flowers (Frett et al., 1988). In other words, higher calcium concentration in the nutrient solution will be associated with greater stem fresh and dry weight (Picchioni et al., 2001). The improved shoot fresh and dry weight in this study can also be justified by the presence of calcium and amino acids, which are believed to promote calcium absorption (through chelate formation) and enhance yield, mRNA transcription, synthesis of glucose, and protein content in plants (Ghasemi et al., 2012; Keutgen and Pawelzik, 2008; Rashad et al., 2003). However, we could not establish any significant differences in shoot number and length between various groups. In contrast, Shams et al. (2012) reported treatment with high levels of calcium (7.5 mm) to maximize the length of the flowering stems in roses (Shams et al., 2012). Some researchers have also introduced the hormone-like activity and nitrogen content of amino acids to be responsible for growth promotion in plants (Madrid et al., 2003; Yeoh and Troung, 1996).

The flower diameter of lisianthus (‘Cinderella Lime’) plants as affected by different sources of calcium in the nutrient solution. Error bars represent standard error (n = 3). Bars having different letters are significantly different at the 5% level by least significant difference (lsd).

The number of flowers of lisianthus (‘Cinderella Lime’) plants as affected by different sources of calcium in the nutrient solution. Error bars represent standard error (n = 3). Bars having different letters are significantly different at the 5% level by least significant difference (lsd).

The relative fresh weight of lisianthus (‘Cinderella Lime’) plants as affected by different sources of calcium in the nutrient solution at different times after harvest. Vertical bars represent the standard error (n = 8). Bars having different letters are significantly different at the 1% level by least significant difference (lsd). 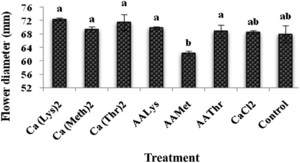 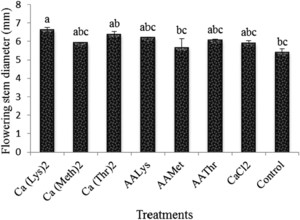 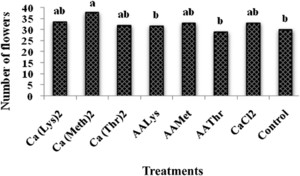 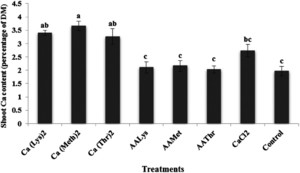 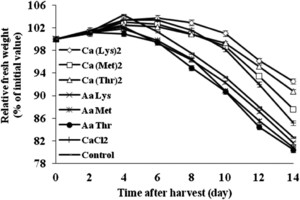