‘Rambling Rose’ in a hanging basket 30 cm in diameter, with ripening fruit. 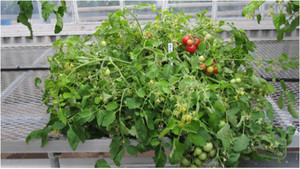