Although a quantitative measurement of sod strength can be made and related to specific treatment effects (e.g., N rate, growth regulators, species, and cultivar comparisons, etc.), there is limited information as to what constitutes an acceptable to preferred value or range of sod strength measurements. Before shear-strength assessment can become a routine tool for sod management, benchmark values need to be established for these devices that indicate when sod is at or within an acceptable to optimum shear strength range for harvesting and handling. Once these values or ranges are established, producers may be more willing to consider devices that quantitatively measure sod strength, and use them to guide their management practices in achieving the optimum strength of sod at harvest. In addition, having an objective measure of shear strength would give a higher degree of criteria on judging acceptability to meet a contract or to resolve contract disputes about sod quality.

The objective of this research was to determine if any relationship exists between subjective producer assessment of sod strength and quantitative measurements of strength obtained from a device that records peak shear force. If a relationship could be obtained, then a further objective was to establish ranges of quantitative measurements that matched producer subjective assessments of acceptable to preferred sod strength for harvesting and handling.

Sod strips were harvested from production fields in West Kingston, RI, across three consecutive growing seasons (2010–12). Within each field in each year, samples were collected at different locations that received varying N rates. It was anticipated that a wide range of sod strengths would be obtained across the different fields and fertility practices. During all three growing seasons, fields were mowed on a regular basis by the producer with clippings returned. Producers applied supplemental irrigation, as well as pest control measures on an as-needed basis.

In 2010, the soil at the sod farm was a Walpole sandy loam (sandy, mixed, mesic Aeric Endoaquepts). The field was seeded in Sept. 2009 with 75% kentucky bluegrass and 25% fine fescues [equal proportions of creeping red (Festuca rubra L. subsp. rubra) and hard fescue (Festuca brevipila Tracey)]. On 13 Oct. and again on 3 Nov., a total of 32 sod strips (0.46-m wide by 1.83-m long, cut to a 10- to 20-mm thickness) were harvested from various locations in the field using the producer sod harvesting equipment. Three random sod strips were collected in each location (one location had two strips), and subjectively evaluated by two field managers with at least 20 years of experience for sod strength using the following ordinal rating scale: 1) “Unacceptable-Too Weak”—excessive tearing at harvest or handling and not salable; sod falls apart; 2) “Adequate”—minimally acceptable for harvesting and handling, but not preferred; some tearing could occur when handled; 3) “Preferred”—minimal harvesting and handling losses; and 4) “Unacceptable-Too Mature”—not desirable because of excessive thatch and overly mature. After subjective assessment, each sod strip was tested for shear strength using a device similar to that described by Sorochan and Rogers (2000) with a digital load cell that measured peak force (kg) to shear (Chatillion Model DFE-200, Ametek TCI Division, Largo, FL). In 2010, an additional sod strip was harvested and rated at a different field with 2-year-old kentucky bluegrass sod.

In 2012, the sod field soil consisted of an Enfield silt loam (coarse-silty over sandy or sandy-skeletal, mixed, active, mesic Typic Dystrudepts) and a Hinckley gravelly sandy loam (Sandy skeletal, mixed, mesic Typic Udorthents). This field was seeded in Sept. 2011 with 70% kentucky bluegrass and 30% fine fescues, containing equal proportions of creeping red, hard, and Chewings [F. rubra L. ssp. fallax (Thuill.) Nyman]. On 20 Sept. 2012, three random strips (0.61-m wide by 1.52-m long, cut to a thickness of 10 to 20 mm) were taken from various locations in the field (total of 30 samples), rated by two different field managers than those between 2010 and 2011 (with at least 10 years of experience), and measured for peak shear force as described in 2010.

Because the widths of the sod harvesters were not the same in different years, sod peak shear force values were expressed on a per meter width basis (dividing peak shear values by the harvest widths: 0.46 m in 2010, and by 0.61 m in 2011 and 2012). Values were separated into peak shear force (kg) per meter width categories (<55, 55 to <70, 70 to <85, 85 to <100, 100 to <115, 115 to <140, and ≥140) and used to construct a contingency table with producer subjective sod strength ratings (“Unacceptable-Too Weak,” “Adequate,” “Preferred,” and “Unacceptable-Too Mature”) (total n = 93). The frequency of observations was indicated for each cell combination of peak shear force category and producer subjective rating category (28 total cells). A test of linear correlation of ordinal data between the producer subjective sod strength ratings and peak shear force categories was conducted by using the Cochran–Mantel–Haenszel χ2 test, in addition to a log likelihood ratio χ2 test of association (because some of the cell frequencies were < 5). The FREQ procedure in the Statistical Analysis Software (SAS) package (Version 9.4; SAS Institute Inc., Cary, NC) was used for each analysis.

Logistic regression coefficients for binary response of at least “Adequate” (includes Adequate and Preferred categories) versus unacceptable, and “Preferred” versus not preferred producer assessments of sod strength in relation to quantitative peak shear force measurements with associated measures of peak shear force per meter width of sod at selected probabilities across 3 years (2010–12) (n = 92) for predominately kentucky bluegrass (Poa pratensis L.) turf in West Kingston, RI. The single datum for “Unacceptable-Too Mature” was excluded from the analyses.

Although we found that a peak shear force between 70 and 140 kg·m−1 width of sod resulted in a preferred sod strength, there is uncertainty about the upper boundary before strength becomes unacceptable because of being overly mature, and sod quality declines. We did record a peak shear force measurement of 221 kg·m−1 width of sod on a 2-year-old predominately kentucky bluegrass stand in 2010 that was rated as unacceptable by the producer because of being overly mature with excessive thatch. However, we only had one observation at this level of peak shear force and turf maturity. Presumably then, unacceptably high sod strength for kentucky bluegrass might be reached somewhere between 140 and 221 kg·m−1 width of sod at the thickness of the sod harvested in these studies (10 to 20 mm).

Although these studies have been useful in separating out sod strength differences between and among selected cultural practices, it is uncertain as to how these values would be useful to the producer. The results may suggest specific practices to the producer, but they lack guidance as to whether the outcomes of these practices would result in acceptable to optimum sod strength.

We report ranges of quantitative sod-strength measurements that would correspond to subjective producer assessments of strength with high probabilities of concordance. By defining these benchmarks, the results from the device we used to quantitatively measure predominately kentucky bluegrass sod strength can be put into a useable context for a sod producer, and may encourage the use of sod-strength testing devices as a routine procedure. The quantitative measurement of sod strength would also benefit the sod producer and buyers of sod by setting standards or providing strength criteria and specifications for contracts, or to resolve contract conflicts where sod strength is disputed between sellers and buyers or users.

Since perception of sod strength is subjective, we can never quantify an exact peak force value that perfectly matches acceptable or preferred assessments. This can be seen by the overlapping of the high-end peak force values for “Adequate” and the low-end peak force values for “Preferred” (Table 1). However, probability curves can be generated that indicate the chances that specific peak shear force measurements will correspond to subjective assessment of unacceptable, acceptable, or preferred sod strength at harvest, as shown in Fig. 1.

We acknowledge the limitation of only four different subjective evaluators across the three years in our study. However, these were experienced sod producers (10 to more than 20 years of experience with sod) and it is likely that they were able to judge reasonably well when sod had sufficient tensile strength for harvesting and handling. Even with this limitation in the number of evaluators, our data give initial benchmark quantitative values by which to delineate kentucky bluegrass sod-strength categories for future research or to initiate producer use of these values with the expectation that they could change as more data are collected. With a larger pool of subjective evaluators, the range of peak shear force values may shift slightly for each category, but this would need to be validated with more research in this area. We also suspect that our delineation of categories will change with differences in the thickness of sod cutting depth and with different species, especially for warm-season turfgrass sods. Sod thickness ranged from 10 to 20 mm in our study, and it is likely that greater sod thickness will require greater peak shear strength to separate a sod sample. Therefore, suggested optimum peak shear strength values will have to take into account cutting thickness. 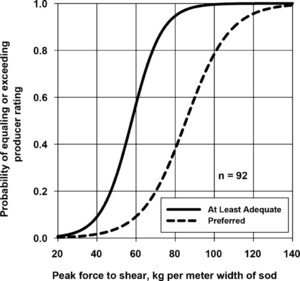