‘Tihope’ is a new disease-resistant blackcurrant (Ribes nigrum L.) cultivar released from the Ribes breeding program conducted at the Research Institute of Horticulture in Skierniewice, Poland. ‘Tihope’ produces large, attractive, and good quality fruit that can be used for blackcurrant juices, frozen fruit, and also for fresh market. In Poland, the blackcurrant breeding program has a long tradition. The first work has been initiated at the Research Institute of Pomology in 1954. Many blackcurrant cultivars have been released since that time (Gwozdecki, 1993; Pluta and Żurawicz, 1993, 2009; Pluta et al., 2012; Somorowski, 1964). The first Polish blackcurrant cultivar commercially grown in our country was ‘Bona’. It is resistant to American gooseberry mildew (Sphaerotheca mors-uvae Schwein./Berk. et Curt.) and produces very high-quality fruit for fresh market (Gwozdecki, 1993). The other, commercially grown Polish blackcurrant cultivars that are registered and protected by the Plant Breeder’s Rights are cultivated in Poland and beyond. These are ‘Tisel’ and ‘Tiben’ (Pluta and Żurawicz, 2002), ‘Ores’, Tines’ and ‘Ruben’ (Pluta and Żurawicz, 2004, 2009), and ‘Gofert’ (Pluta and Żurawicz, 2014). The breeding program is still active and new clones are under intensive evaluation as well as new cultivars are being released.

‘Tihope’ was selected among seedlings derived from the crossing of ‘Titania’ × P9/11/14, developed at the Fruit Breeding Department of the Research Institute of Horticulture (formerly Research Institute of Pomology and Floriculture). Crossing of parental forms was made in 1987 by S. Pluta, and the seedling, from which the cultivar was originated, was selected in 1996. During evaluation, ‘Tihope’ was tested under the name of PC-425. Both parental forms differ widely in terms of their pedigree, geographical origin, and many agronomic features. ‘Titania’ was obtained in Sweden by Tamas (1984) from the cross of ‘Altayskaya Desertnaya’ × (‘Consort’ × ‘Kajaanin Musta’) developed in early 1970s. It produces medium-sized berries (usually about 1.0 g) on medium-long strigs. The berries ripen uniformly and early in the season, from the beginning to mid-July. The acidity is low, they have a good flavor and keep well on the bush. Other advantages of ‘Titania’ include high productivity, self-fertility, good suitability for processing as well as resistance to American gooseberry mildew (S. mors-uvae Schwein./Berk. et Curt.) and white pine blister rust (Cronartium ribicola Fish.) and medium susceptibility to anthracnose (Drepanopeziza ribis Kleb.). Main disadvantages of this cultivar are a very high growth vigor of plants and susceptibility to aphids (Cryptomyzus galeopsidis Kaltenbach) and red spider mites (Tetranychus urticae Koch.) (Hummer, 1999). Male parent (P9/11/14) is a blackcurrant selection developed by R. Brennan at the Scottish Crop Research Institute (recently James Hutton Institute) in Dundee, Scotland. It originated from the crossing made between 238/36/12 × ‘Ben Lomond’. Mature bushes are of medium size with slight spreading and open habit. It produces a lot of shoots. Leaves are light green and medium in size (R.M. Brennan, personal communication). In conditions of central Poland, fruit ripening of P9/11/14 is midseason (usually 15–20 July). The plant is moderately productive; fruit is medium in size (0.8–1.0 g) on medium strigs. Fruits are acidic, medium rich in soluble solids, anthocyanins, and ascorbic acid. Plants are highly resistant to powdery mildew, but susceptible to white pine blister rust and anthracnose.

In central Poland, the bloom period of ‘Tihope’ is medium late (end of April or beginning of May depending on the season/year), similar to ‘Titania’. ‘Tihope’ is highly self-fertile and produces large berries (1.5 g), significantly larger than ‘Titania’ (1.1 g). Berries are on medium-long strigs (≈6.3 cm) (Fig. 1). On average, there are about nine fruits in one strig. Its appearance is attractive; the taste of the fruit is similar to that of ‘Titania’, though its aroma is more pleasant. Fruits are also firmer, resulting in a better postharvest life of the fruits kept for 24 and 72 h in the room temperature (≈20 °C). Fruits of ‘Tihope’ are medium rich in soluble solids content (3-year average for 2008–2010 was 17.4%), in ascorbic acid (average 118.3 mg/100 g of fresh fruit), anthocyanin content (342.2 mg/100 g), and acidity (3.12%), similar to the standard cultivar Titania (Table 1). The fruit of ‘Tihope’ is suitable for different processing applications (concentrates, juices, jellies, frozen food, and other high-quality products) and also for individual quick freezing (IQF). The proper ratio of sugars and organic acids gives pretty good taste, also suitable for fresh market.

Comparison of harvest date, yielding, and content of chemical compounds in fruit of evaluated blackcurrant cultivars, Skierniewice, Poland (average for 2008–10).

In general, fruit of ‘Tihope’ mature homogeneously within the strig and a bush, so mechanical harvest is easy. In central Poland, its ripening time is mid-July (on average), which is 5 to 7 d later compared with ‘Titania’. In this regard, ‘Tihope’ is considered a medium-early ripening cultivar. Under Polish agroclimatic conditions, ‘Tihope’ is very productive, regular bearing, and suitable for machine harvesting. In trials conducted from 2008 to 2010, in which fruits were picked by a Polish-made self-propelled harvester (type KPS-4B; Research Institute of Pomology and Floriculture, Skierniewice, Poland), the average fruit yield of 2.02 kg/bush (about 10 t/ha) was achieved, about 40% more than ‘Titania’ (Table 1). The effectiveness of the mechanical harvest was almost 98.0%, which was higher than that for ‘Titania’ (95.6%).

The bush is vigorous, having a semierect growth habit (Fig. 2). Every year, the bush produces a sufficient amount of new shoots on which flowers and fruits are formed abundantly. The shoots are numerous, medium thick, and strong, reaching on average 140 cm, about 10 cm less than that in ‘Titania’. The bush has a tendency to spread out into interrows, but less than ‘Titania’. The total plant size of ‘Tihope’, expressed as the bush size index in square meter (height × width of the bush), shows that ‘Tihope’ is about 12% less vigorous than ‘Titania’ (Table 2). The plant buds are small and elongated, adhering to the shoots with a little anthocyanin color. Leaves are of medium size, five-lobed, light green, with an extended center lob. The inflorescences are single and/or double of medium length. The bush requires a regular pruning, which stimulates an intensive growth of new shoots. The shoots are sufficiently flexible, which allows for a good shaking off the fruit from the bush without visible symptoms of shoot damages made by the harvester.

The bushes of ‘Tihope’ possess high level of winterhardiness. In Poland, we have not observed any frost damages on shoots until now, even when winter temperatures were very low (−30 °C) and snow cover was not present. However, in some years, flower buds, flowers, and fruit sets suffer from the late spring frosts. On the basis of multiyear field observations, ‘Tihope’ is highly resistant to the American gooseberry mildew and white pine blister rust, similarly to ‘Titania’, and significantly less susceptible to anthracnose (Table 2). Our observations also show that ‘Tihope’ in comparison with ‘Titania is less susceptible to gall mite (Cecidophopsis ribis West.) and red spider mite (results are not presented here). However, in some years ‘Tihope’ shows medium susceptibility to blackcurrant aphids and blackcurrant stem midge (Resseliella ribis Marik.). Detailed information regarding a comparison of ‘Tihope’ with some other blackcurrant cultivars commercially grown in Poland is presented in Tables 1 and 2.

‘Tihope’ has been registered and included in the Polish National List of Fruit Plant Varieties by the Polish Research Center for Cultivar Testing (in Polish, Centralny Ośrodek Badania Odmian Roślin Uprawnych). In Europe, ‘Tihope’ is protected by the Community Plant Variety Office in the territory of the European Union. At the end of 2012, the applications were submitted to the Canadian Food Inspection Agency for receiving Plant Breeders' Rights (PBRs) in Canada (application no. 12-7831) and to the U.S. Patent and Trademark Office in the United States (application no. US 61/848,169). Certified ‘Tihope’ plants are being already propagated by licensed nurseries in the United States and Canada, the names of whom will be supplied on request. Growers and nurseries interested in cultivating or propagating this cultivar in territory of the United States and Canada may contact Greg Quinn, Walnut Grove Farm, LLC, 59 Walnut Lane, Staatsburg, NY 12580; ghquinn@Currants.com. 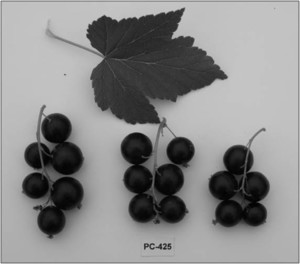 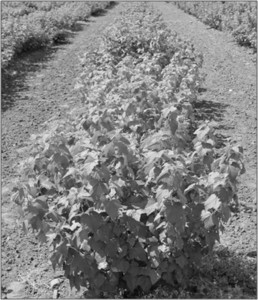