The leading strawberry (Fragaria ×ananassa) cultivar grown in Florida over the past decade is ‘Strawberry Festival’ (Chandler et al., 2000), which occupied as much as 60% of Florida acreage before the introduction of ‘Florida Radiance’ (Chandler et al., 2009). The durable and flavorful fruit of ‘Strawberry Festival’ continue to make this cultivar a standard in the industry and in worldwide markets despite its decreased fruit size at the end of the growing season. ‘Florida Radiance’ (known as ‘Florida Fortuna’ outside the United States) has since become the leading industry standard in Florida, rapidly increasing to ≈75% of planted acreage in 2014–15 due to its high early and total yields and uniform, large, and attractive fruit.

There is currently a need for additional cultivars with yield potential and fruit size similar to ‘Florida Radiance’ that also have eating quality similar to or better than ‘Strawberry Festival’. Large fruit make harvesting more efficient, and produce buyers place strict limits on minimum average fruit size. These limits can be difficult to achieve for 907 g containers, especially late in the season when the fruit size of all cultivars tends to decrease. Eating quality is also becoming increasingly important, as competition from other winter growing regions such as southern California and central Mexico intensifies. Strawberries that can be differentiated in the market based on their flavor may help Florida growers maintain a competitive edge.

Sensation™ ‘Florida127’ strawberry (hereafter referred to only by the patented name ‘Florida127’) has demonstrated excellent fruit size and eating quality, while also producing high early and total yields in experimental trials. Trials have been conducted on the research plots of the University of Florida Gulf Coast Research and Education Center (GCREC) (Balm, FL), at the Florida Strawberry Growers Association (FSGA) headquarters in Dover, Florida, and in trials on several commercial farms in west-central Florida.

‘Florida127’ strawberry originated from a 2009 cross between Winterstar™ ‘FL 05-107’ (female parent) and unreleased selection FL 02-58 (male parent) (Fig. 1). ‘FL 05-107’ (Whitaker et al., 2012a) was chosen as a parent for its early yield potential and fruit firmness, while FL 02-58 was chosen primarily for its fruit size and flavor characteristics. FL 02-58 arose from a cross between ‘Sweet Charlie’ (female parent) and ‘Treasure’ (male parent) which are both well-known for their sweet flavor profiles. Originally trialed as breeding selection FL 09-127, ‘Florida127’ was initially evaluated as part of a clonally replicated test of first-year seedlings in 2009–10 and 2010–11 for the purpose of generating genetic parameter estimates (Whitaker et al., 2012b). It ranked highly in an index of multiple traits from the 2 years of harvest data and was also selected visually during the course of data collection.

During the 2011–12, 2012–13, and 2013–14 seasons, yield and fruit quality data were collected from a replicated trial conducted at the GCREC. Field plots were prepared and maintained according to current commercial practices for annual strawberry plasticulture in Florida. Beds were 91.5 m long, 71 cm wide, 15 cm high at the edges, and 18 cm high in the center and were covered with a single layer of black, high-density polyethylene mulch. Preplant fumigant consisted of a 65:35 mixture of telone and chloropicrin. Each bed contained two rows of plants spaced 38 cm apart within rows and 28 cm apart between rows. For the 2011–12 trials, strawberry plug transplants were produced at the GCREC greenhouse facilities from runners harvested from potted mother plants (not from tissue culture stock) grown in the same greenhouses. Runners were planted in plug trays and placed under intermittent mist for seven days. After removal from the mist, the transplants were grown for five additional weeks until planting in the field during the second week in October. In 2012–13 and 2013–14, trials were conducted using bare-root runner plants grown under contract with a commercial nursery. Four replicate plots (10 plants per plot) of each genotype were planted in a randomized complete block design at the GCREC. Plant spacing was 38 cm within rows and 28 cm between rows. Overhead irrigation was applied for plant establishment, after which water and fertilizer were applied exclusively through the drip tape.

All ripe fruit were harvested, graded, counted, and weighed twice a week from December through March. Fruits that were diseased, misshapen, small (<10 g), or rain damaged were considered unmarketable, and the remaining fruit were weighed to determine the marketable yield in grams on a per plant basis. Fresh fruit were transported to the U.S. Department of Agriculture—Agricultural Research Service, U.S. Horticultural Research Laboratory in Fort Pierce, FL once each month for flavor evaluations by a trained sensory panel [methods described in Plotto et al. (2013)] and measurement of soluble solids content (SSC), pH, and titratable acidity (TA) on the same fruit. Fruit were also transported to the Food Science and Human Nutrition Department of the University of Florida for consumer sensory evaluation. The ratings of greater than 100 untrained panelists were collected for overall acceptability, texture acceptability, flavor intensity, sweetness intensity, and sourness intensity using the methods and rating scales of Ubeda (2011) and Kalva et al. (2014). Commercially harvested and packed fruit (454 g plastic containers) from on-farm trials were also transported on three different dates in 2012–13 and in 2013–14 to the Food Quality Laboratory of the University of South Florida for analysis of quality attributes over time during cold storage. Weight loss and visual quality ratings were collected using previously published methods (Nunes and Emond, 2007; Nunes and Delgado, 2014).

‘Florida127’ is a short-day genotype adapted to an annual plasticulture growing system. Some flowering in the summer nursery, similar to ‘Florida Radiance’, suggests a lower chill requirement and/or longer permissive day length for flower bud initiation than for ‘Strawberry Festival’. The plant is upright with open architecture, allowing air movement and easy visualization of the fruit (Fig. 2). Its moderate plant size and long pedicels allow the fruit to be easily harvested. Preliminary trials indicate that a standard in-row spacing of 38 cm is most appropriate for this cultivar. ‘Florida127’ produces moderately firm and juicy fruit that are broad-conic in shape with a medium-green (colorimeter L* = 35.3 ± 1.4, a* = −11.3 ± 1.0, b* = 13.8 ± 1.5) calyx that is slightly reflexed. The redness of the fruit is medium externally (a* = 38.9 ± 3.1), with moderate internal redness (a* = 20.1 ± 8.3). The achenes are slightly sunken, similar in depth to those of ‘Strawberry Festival’. Fruit size is consistently large, with average fruit weight significantly greater than ‘Strawberry Festival’ in all seasons tested and greater than ‘Florida Radiance’ in 2013–14 (Table 1). 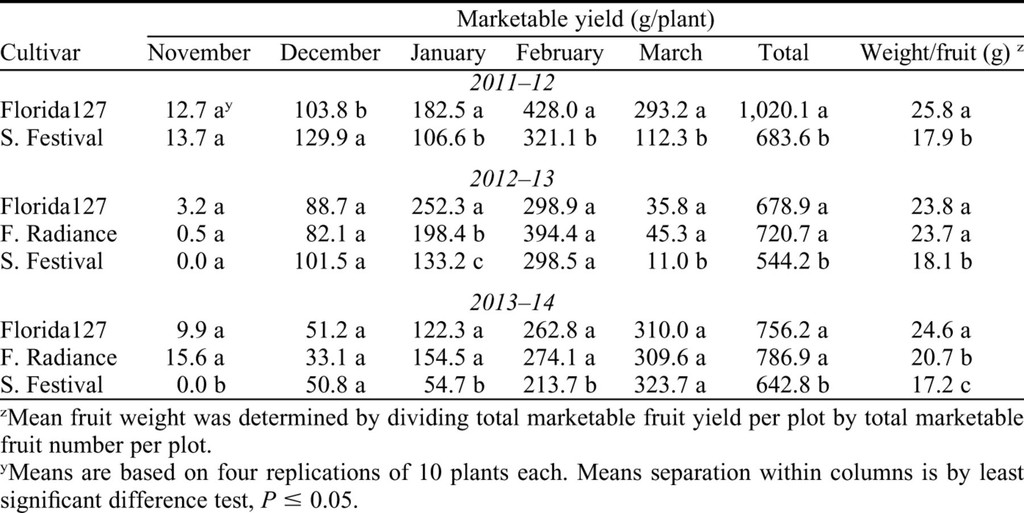 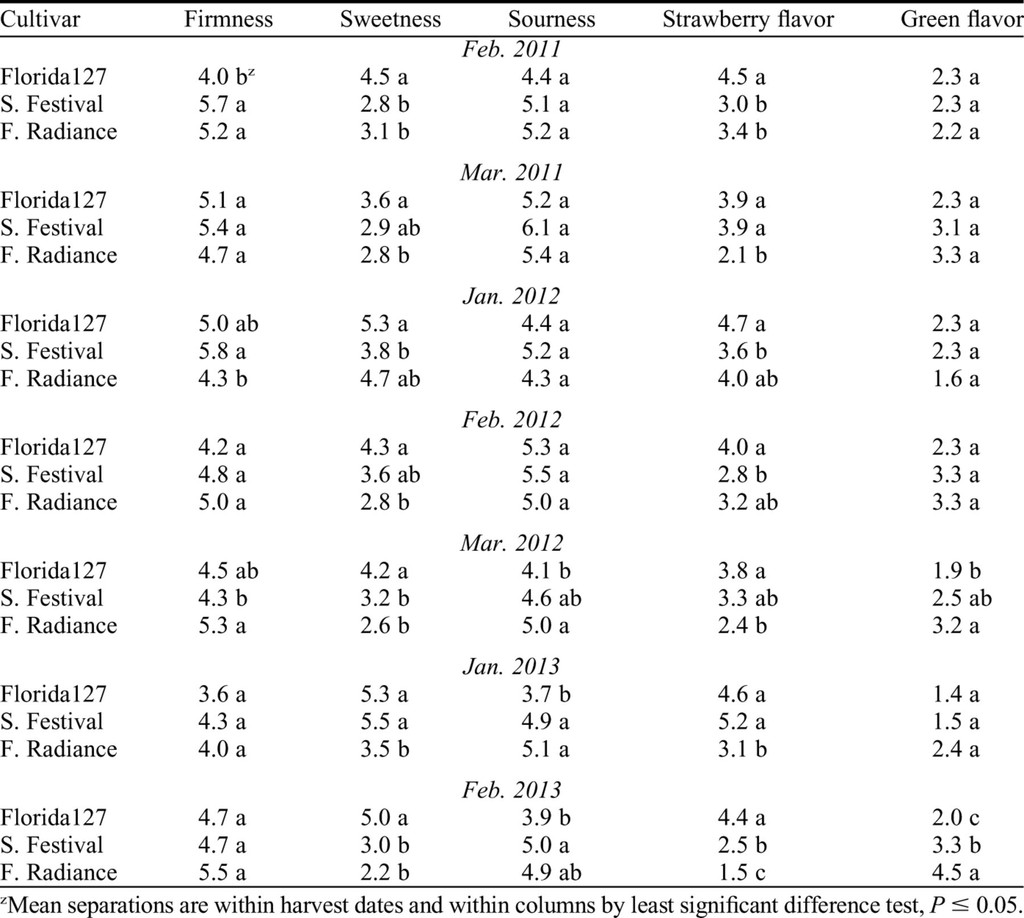 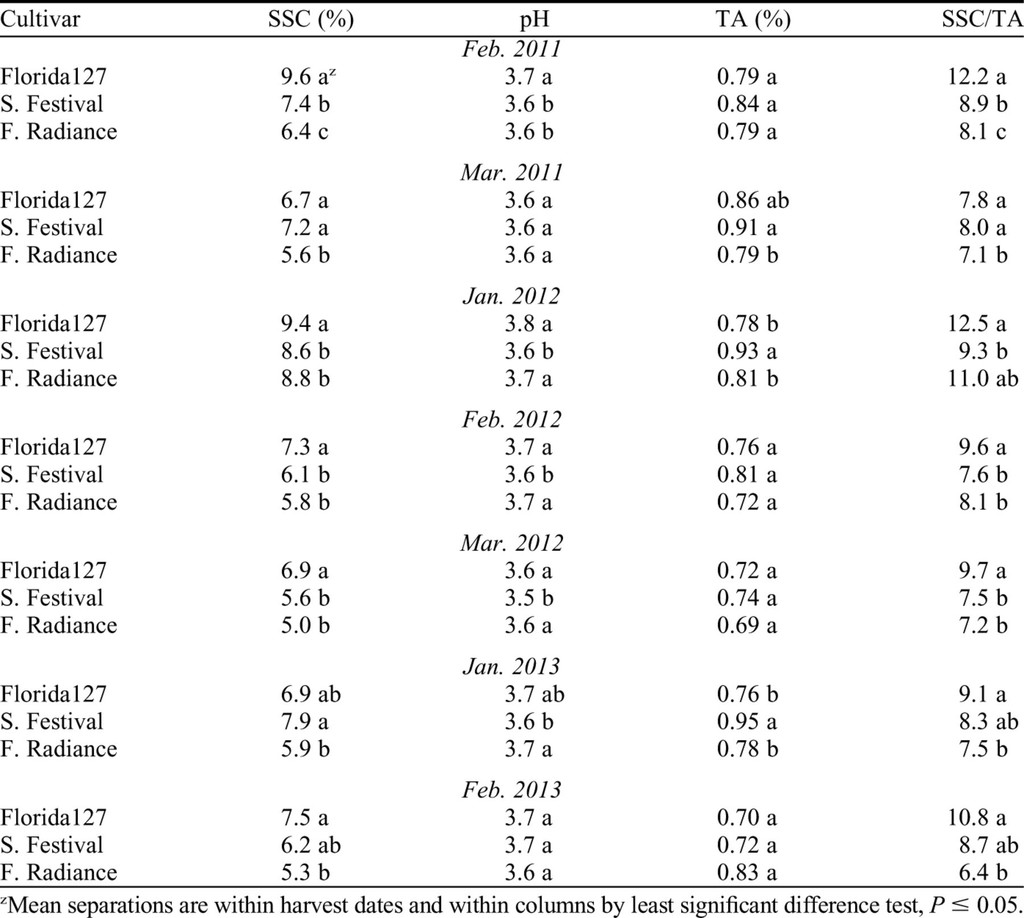 Rankings of fruit weight loss for the three varieties varied with harvest date when cold stored for 8–10 d. Overall, ‘Florida127’ tended to have similar weight loss to ‘Florida Radiance’ and slightly more weight loss compared with ‘Strawberry Festival’ but tended to have less visual shriveling compared with both commercial standards (data not shown). Subjective taste evaluations of the same fruit indicated that ‘Florida127’ maintained acceptable flavor quality during cold storage for 1–4 d longer than the commercial standards, which is consistent with the sensory results.

In the replicated trials, total yields of ‘Florida127’ were greater than ‘Strawberry Festival’ and not different from ‘Florida Radiance’ (Table 1). It also had the highest January yields in the first 2 years and was not different from ‘Florida Radiance’ during 2013–14, which is notable since January is usually the month of lowest supply for other competing growing regions. The high yield of ‘Florida127’ as an unchilled plug transplant in 2011–12 indicates that this variety may perform well in this transplant format.

A plant patent for ‘Florida127’ and a registration for the Sensation™ trademark have been filed by the Florida Agricultural Experiment Station. Information on nurseries licensed to propagate this cultivar can be obtained from the Florida Foundation Seed Producers, Inc. (http://ffsp.net).

Pedigree of ‘Florida127’ strawberry. The female parent is listed on the upper side of each bifurcation. 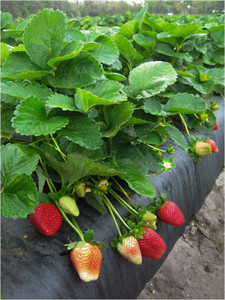