Six types of light sources [0G, 20G, 40G, cool-white light-emitting diode (LED CW), cool-white fluorescent lamp (FLCW), and plant light fluorescent lamp (TLRA)] were used as the sole light sources to cultivate boston lettuce (Lactuca sativa L. cv. Ostinata). The photosynthetically active radiation (PAR) range was separated into five sections and the contributions of each spectral section on fresh weight (FW) were quantified. The results indicate that the conventional method of separating PAR into red, green, and blue at 100 nm apart was not accurate enough to clarify the contribution of different spectral sections to FW of boston lettuce. Green light (525–575 nm) at less than 30% of PAR is even more important than red (625–700 nm) and blue (400–475 nm) to plant growth. Yellow light (575–625 nm) has very little effect on plant growth.

Six types of light sources [0G, 20G, 40G, cool-white light-emitting diode (LED CW), cool-white fluorescent lamp (FLCW), and plant light fluorescent lamp (TLRA)] were used as the sole light sources to cultivate boston lettuce (Lactuca sativa L. cv. Ostinata). The photosynthetically active radiation (PAR) range was separated into five sections and the contributions of each spectral section on fresh weight (FW) were quantified. The results indicate that the conventional method of separating PAR into red, green, and blue at 100 nm apart was not accurate enough to clarify the contribution of different spectral sections to FW of boston lettuce. Green light (525–575 nm) at less than 30% of PAR is even more important than red (625–700 nm) and blue (400–475 nm) to plant growth. Yellow light (575–625 nm) has very little effect on plant growth.

Light plays an important role in photosynthesis. Visible light is defined in the wavelength from 380 to 780 nm. Light within 400 to 700 nm, termed PAR, can be roughly separated into blue (B, 400–500 nm), green (G, 500–600 nm), and red (R, 600–700 nm). RGB light affects plant growth in different ways. For example, blue light induces biomass production but suppresses the hypocotyl elongation; red light boosts hypocotyl elongation and expands leaf (Johkan et al., 2010; McNellis and Deng, 1995). As for green light, researchers (Folta, 2004; Kim et al., 2004a, 2004b) found that it is related to leaf growth, stomatal conductance, and early stem extension. Green light is considered to be insignificant in driving photosynthesis due to the low absorptivity coefficient in the absorption spectra of purified chlorophylls (Sun et al., 1998).

Light-emitting diodes (LEDs) allow production of light that emit only the wavelengths of light corresponding to the absorption peaks of plant requirements. Other advantages such as energy efficiency, long lifetime, low heat generated at the side-facing plants, and dramatic decrease of cost make them popular light sources to enhance plant growth, increase fruit yield, improve quality, control of plant morphology and hormone physiology in plant cultivation (Fan et al., 2013; Islam et al., 2014; Jao and Fang, 2004; Johkan et al., 2010; Kim et al., 2004a, 2004b, 2006; Xu et al., 2012). In this study, two types of light sources (LEDs and fluorescent lamps with various spectra) were used to cultivate boston lettuce (L. sativa L. cv. Ostinata). To obtain a more precise index about the effect caused by different wavebands, an analytical model involving five spectral sections was adopted. Understanding the correlation between light quality and the plant growth will be advantageous to plant cultivation and the development of optimum light spectrum in the future.

Albright et al. (1999) developed a vegetative growth model of boston lettuce based on environmental conditions, including air temperature, CO2 concentration, light integral, and nitrate concentration of the nutrient solution. As shown below, coefficient “A,” in Eqs. [1] and [2], was the environmental coefficient related to the integrated PPF (L) during cultivation, and indoor CO2 concentration (C). Parameter “d” represented the growth day from seeding, and “” was normalized growth curve of DW. With the given “A” and “d,” the DW at day d (DWd) can be derived.

A1, A2, and A3 are constant and weighing coefficient of integrated PPF (L) and CO2 concentration (C). C1 and C2 were 0.5712 and 0.007742, respectively, according to Albright et al. (1999).
In this study, CO2 concentration was fixed, the term becomes constant and can be merged with the term expressed in . To analyze the effect of different spectral sections on plants growth, the PPF waveband was separated into various partitions, and each partition represents a specific range of wavelength. Eq. [3] could be modified as shown below:

where is the integrated PPF of separated spectral section, and , the weighing factor of , represents the contribution of related spectral range.
From the commercial point of view, the market price of lettuce was measured based on FW, Eq. [5] was derived.

A dramatic difference can be found in the coefficient of d2 term. This term is highly related to the latter growth of lettuce due to value of days after seeding (d) was squared. The positive value of C2 indicates that the growth rate of lettuce, expressed in terms of the value of DW and FW, was decreasing, that is approaching saturation, when d value gets bigger. However, the negative value of indicates that the mass of lettuce will continue to increase without saturation. This is one of the major differences between plant growth under sunlight and under artificial light. When grown under sunlight, in the same weather conditions, the amount of PPF will not vary too much whether the lettuce was young or matured. However, in a plant growth chamber using artificial light, the bigger the plant growth and the closer it gets to the light source, the more PPF it gets. It did not reach saturation within the experimental conditions of this study.

Each treatment (0G, 20G, 40G, LED CW, FLCW, and TLRA) was harvested in 15 plants for statistical analysis. Using 5% as the level of significance, statistical analysis was subjected to analysis of variance followed by Duncan’s multiple range tests (SPSS, IBM). To obtain the indexes about the effect caused by different wavebands, Bi in Eq. [5] has been determined by Levenberg–Marquardt algorithm using commercially available software (1stOpt; 7D-Soft High Technology, China).

As shown in Table 1, a total of four LED and two fluorescent light (FL) sources were used. The LEDs performed significantly better than FLs in terms of FW and DW. The treatment 20G (23% green as shown in Table 2) has the greatest mean FW. However, it shows no significant difference with other LED light sources including less green (0G), more green (40G), and LED CW (51% green).

FLCW lamps are often used for plant cultivation, but the results showed that the FW of lettuce under FLCW was significantly lower than other treatments.

The proposed model was used by separating PAR range into three and five sections as mentioned above. The R2 values were 0.15 and 0.92, respectively (Tables 2 and 3). The dramatic difference on R2 suggested that the conventional RGB model was not accurate enough to clarify the contribution of different spectral sections to FW of boston lettuce.

Further analysis focusing on lights with high green ratio was conducted based on the results derived from Table 3. Spectrum data of the yellow section and growth data using 0G and 20G LEDs were ignored. As shown in Table 4, there are four types of light sources: two LEDs and two FLs (40G, LED CW, FL CW, and TLRA) with the green ratio of 18.8% to 30.7%. The results shown in Table 4 indicate that the relative contributions of red (69.21) and blue (85.09) were higher than data shown in Table 3. This showed that the contribution of green light was decreased when the intensity of green light increased in the range of 0% to 30% of PAR. Column 3 of Table 4 also indicates that the range of blue-green (475–525 nm) has no impact on FW accumulation of lettuce under conditions of green light at 18% to 30% of PAR.

Green light was often assumed to be unimportant in driving photosynthesis mainly due to the low absorptivity in the absorption spectra of purified chlorophylls (Sun et al., 1998). In a spectrophotometer cuvette containing dissolved chlorophyll, the internal reflection did not occur, so the absorption of green light was considered to be very low (Salisbury and Ross, 1992). Although the chances of green wavelengths being absorbed by chlorophylls were small, the wavelengths that were not absorbed would be repeatedly reflected from chloroplast to chloroplast between the photosynthetic cells. With each reflection, a small percentage of the energy was absorbed until half or more was absorbed and used in photosynthesis (Kim et al., 2006). In addition, the active spectra for photosynthesis showed that green light was in an effective spectral region to power up photosynthesis in higher plants (McCree, 1972). In thylakoids, most of the carotenoids could efficiently transfer their excitation energy to the same reaction centers like chlorophylls, so they also contributed to photosynthesis (Siefermann-Harms, 1987; Taiz and Zeiger, 1991).

Kim et al. (2004a, 2004b) reported that lettuce showed better growth and higher photosynthetic rates with the addition of 5% supplemental green light (500–600 nm) compared with only using the red (600–700 nm) and blue (400–500 nm) LEDs, and the addition of 24% green light (500–600 nm) could positively enhance plant growth. Leaves in the lower canopy would be able to use the transmitted green light in photosynthesis and perhaps reduce levels of leaf senescence and/or shedding within the canopy (Preece and Read, 1993). Green light was effectively absorbed by green leaves, and efficiently drove electron transport (Sun et al., 1998). Terashima et al. (2009) indicated that green light mixed with strong white light drove photosynthesis more effectively than red light in sunflower leaves.

The contribution indexes of different spectral sections to the growth of lettuce (Bi) are shown in Table 3. It was a combination of effects related to plant photosynthesis, leaf transmittance, gS, and carbon fixation. The index of spectral section from 575 to 625 nm was 1.52E-16, which indicated that this portion of wavelength made no contribution to FW of lettuce.

Dougher and Bugbee (2001) suggested that “yellow” light from 580 to 600 nm suppressed chlorophyll or chloroplast formation. In Euglena, Schwartzbach (1990) determined that “green” light (peak at 597 nm) was less effective than blue in the synthesis of chlorophyll when light was saturating. Al-Wakeel and Hamed (1996) showed more growth suppression under “yellow” (peak at 595 nm) than “green” (peak at 520 nm) light in cucumbers. This study had consistent results and agreed with these studies.

The proposed model only considered the effect of single spectral section on lettuce and it did not consider the effect of interaction between spectra sections. For example, adjusting the ratio of blue and green light could stimulate the stomatal opening (Frechilla et al., 2000; Kim et al., 2004a; Talbott et al., 2002) and Emerson enhancement effect involved far red light (Govindjee, 1964). Therefore, this model can only be used to analyze spectrum of light sources within the minimum and maximum ranges as shown in Fig. 2. Nevertheless, optimum light spectral design can be derived from such models with further investigation.

A model was proposed to investigate the effects of various spectral ranges on the growth of plants in terms of FW and/or DW. Boston lettuce was used as the example. The low R2 value suggested that the traditional analytical method which separated PAR range into R, G, and B sections was somehow misleading. This study separated the same range into five sections and revealed that the green light (525–575 nm) has much higher contribution than red (625–700 nm) and blue (400–475 nm). The researchers categorized wavelengths from 500 to 600 nm as “green” light and concluded that additional green light promotes plant growth. This study further clarified that “green” only within the range of 525 to 575 nm promotes plant growth. “Green-yellow” range from 575 to 625 nm has relatively very little effect on the growth of boston lettuce. 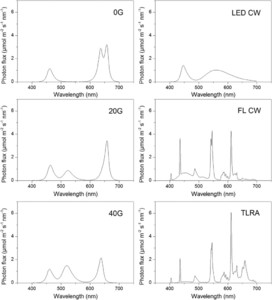 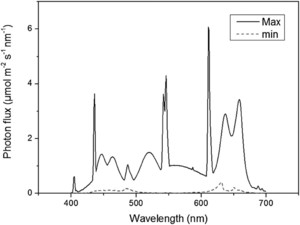