Rabbiteye blueberries (Vaccinium ashei Reade = V. virgatum Aiton) are native to the southeastern United States and due to their broad adaptation, vigor, and high yield potential, rabbiteye blueberry cultivars are grown widely throughout the region by both producers and homeowners. Commercial blueberry producers in the Gulf Coast region have capitalized on the lucrative early U.S. fresh berry market by growing rabbiteye blueberry cultivars that ripen earlier than highbush type blueberries grown in more northern regions. Production of rabbiteye blueberries is also expanding into the Pacific Northwest where they may be grown to capitalize on late-season fresh berry markets. The midseason ripening rabbiteye blueberry ‘Powderblue’ is among more popular rabbiteye blueberries mostly due to its exceptionally light blue fruit that results from the “bloom” or relatively thick natural waxy coating on berry skins (Freeman et al., 1979). However, the relatively small berries of ‘Powderblue’ may at times sell for less than larger berries of other cultivars. ‘Bluesfest’ is a productive new rabbiteye blueberry developed and released by the U.S. Department of Agriculture, Agricultural Research Service (USDA-ARS). Important attributes of ‘Bluesfest’ include its mid-to-late season ripening period, exceptionally light blue color, and berry size exceeding that of fruit of ‘Powderblue’, an industry standard.

‘Bluesfest’ has been evaluated most extensively at the USDA-ARS Thad Cochran Southern Horticultural Laboratory research farm, Stone County, MS (lat. 30°47′22′′N, long. 88°59′21′′W, elevation 38 m; USDA plant hardiness zone 8b, Saucier fine sandy loam soil type) as well as the Mississippi State University Coastal Research and Extension Center, McNeill Unit, McNeill, MS (lat. 30°39′28′′N, long. 89°38′07′′W, elevation 66 m, USDA plant hardiness zone 8b, Ruston silt loam soil type). ‘Bluesfest’ and other selections were established in replicated trials employing standard production practices for commercial rabbiteye blueberry production (Braswell et al., 2009). Plants grew on raised beds that were amended with ≈200 m3·ha–1 ground pine bark. Other practices included annual pre- and postemergent herbicide applications, fertilization with 45, 15, and 15 kg·ha–1 N, P, and K, respectively, annual pruning to remove 4-year-old canes, and daily-drip irrigation as needed during the growing season. No fungicides or insecticides were applied. At the Stone County site, ‘Bluesfest’ was originally planted in 1992 in a single three-plant observation plot; it was then increased and planted in 2002 in three-plant plots within a three replication trial that included several other selections and the widely grown fresh market rabbiteyes ‘Brightwell’, ‘Climax’, ‘Premier’, and ‘Powderblue’. At the McNeill site, Bluesfest and these same cultivars were established in 2004 in three-plant plots within a two replication trial and similarly managed. ‘Bluesfest’ has a moderately spreading growth habit and narrow crowns; 10-year-old plants grown at the Stone County site averaged 2.06 m in height and 1.45 m in width. Subjective observations of plant and berry attributes were made at each location; however, laboratory measurements of fruit quality were made only from samples collected at the Stone County site. Subjective ratings of yield and plant vigor attributes of ‘Bluesfest’ were conducted on individual plants within each three-plant plot and then averaged. Ratings of yield and plant vigor were consistently equal to or greater than either ‘Climax’, ‘Powderblue’, or ‘Premier’, but less than those observed for ‘Brightwell’ (Table 1). Figure 1 illustrates the exceptionally light blue berry color of ‘Bluesfest’ during ripening that was comparable to that of ‘Powderblue’ and was a much lighter shade of blue than berries of the other cultivars. Subjective ratings of flavor for ‘Bluesfest’ were similar to ‘Powderblue’, and sweetness of both cultivars increased after berries were allowed to ripen on the bush for several days after attaining their characteristic light blue skin color (data not shown). Berry picking scar size was commercially acceptable and comparable for all four cultivars.

Fruit and plant characteristics of ‘Bluesfest’, and four widely grown rabbiteye blueberry cultivars at both McNeill, and Stone County, MS, 2007–13.

In southern Mississippi, early flowering times predispose blueberry flowers and developing fruit to freeze injury (Spiers, 1978). Plants that bloom after mid-March are more likely to escape such late-spring frost injury. The average time of 50% flowering for ‘Bluesfest’ was 10 and 1 d later than ‘Climax’ and ‘Brightwell’, respectively (Table 1). Time of 50% ripening of ‘Bluesfest’ berries was 18 d and 8 d later, respectively, for these same comparison cultivars, and similar to that of ‘Powderblue’.

Laboratory measurements of several berry quality attributes including berry weight, berry firmness, pH, and percentage of soluble solids were made from three replicate berry samples in which berries of each plant in each plot were composited to single samples each year from 2006 to 2008 (Table 2). ‘Bluesfest’ berry size, determined from averaging the weight of 30 berries was similar to ‘Climax’ and larger than ‘Powderblue’, but smaller than Brightwell. Berry firmness measurements were obtained from analyzing 20 berries from each sample on a Firmtech II (BioWorks Corp., Stillwater, OK), an apparatus that measures firmness in terms of the rate (g·mm–1) at which the force required to compress or flatten berries increases. Berry firmness values were similar for all cultivars except ‘Premier’ which consistently had softer or more easily compressed fruit. Tendencies of berry splitting were measured by soaking 30 to 50 fully ripe berries from each sample in distilled water for 24 h and counting the number of split berries (Marshall et al., 2007). The splitting tendency for ‘Bluesfest’s berries was comparable to that of ‘Climax’ or ‘Powderblue’, but was slightly less than that of ‘Brightwell’ and slightly higher than that of ‘Premier’. Soluble solids content and pH were determined from juice extracted from a “puree” of a 40 g berry sample placed into a commercial Waring® blender (Dynamics Corp. of America, Hartford, CT) and strained through cheesecloth. A hand-held temperature-compensating refractometer (Leica Microsystems AR 200, Wetzlar, Germany) was used to determine the soluble solids concentration while pH was measured using an AR20 pH/conductivity meter (Thermo Fisher Scientific Corp., Waltham, MA). With the exception of ‘Climax’ which had a slightly higher sugar content, both soluble solids content (°Brix) and pH of ‘Bluesfest’ berries were comparable to those of the other cultivars tested.

‘Bluesfest’ grows vigorously in the nursery and propagates readily from softwood cuttings taken from new growth in late spring, from flushes of new growth in late summer, and from hardwood cuttings taken in the winter. It has shown excellent survival in fields in southern Mississippi, and no diseases have been observed. This new cultivar should be considered for trial plantings where rabbiteye blueberries have been successfully grown. As is the case with all rabbiteye blueberry cultivars, plants of Bluesfest should be interplanted with other rabbiteye blueberry cultivars having similar flowering periods to optimize cross-pollination and fruit set.

Bluesfest is a public domain blueberry cultivar and a limited supply of rooted cuttings, cutting wood, and tissue-cultured plants is available to certified nurserymen. Written requests for plant materials should be sent to Dr. Stephen Stringer, USDA-ARS Thad Cochran Southern Horticulture Laboratory, P.O. Box 287, Poplarville, MS 39470. Genetic materials of this release are deposited in the National Plant Germplasm Repository at Corvallis, OR, where it is available for research purposes and commercial development. 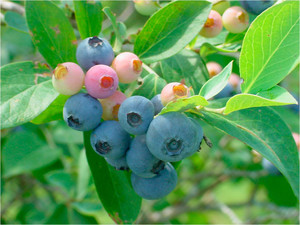