Muchamiel is a tomato (Solanum lycopersicum L.) landrace of Marmande type, very popular in southeastern Spain due to its excellent organoleptic fruit quality. Fruits of the Muchamiel cultivars are medium-large in size (150–300 g), multilocular (five or more locules), flattened and strongly ribbed, green shoulder, and red flesh. The melting texture and mild flavor of these fruits makes them highly valued in salads. However, the incidence of several viruses as Tomato mosaic virus (ToMV), Tomato spotted wilt virus (TSWV), and Tomato yellow leaf curl virus (TYLCV) can make the Muchamiel (and other) landraces cultivation nonviable in many areas, especially in open field (Picó et al., 2002). The Miguel Hernández University breeding program for the introgression of virus into Spanish landraces has resulted in the release of the UMH 1200 breeding line, homozygous for Tm-2a, Ty-1, and Sw-5 genes (García-Martínez et al., 2011). This breeding line allows farmers to obtain an acceptable harvest with intense virus incidence conditions. However, important yield decreases (ranging between 50% and 75%) have been reported for UMH 1200 with low virus incidence conditions (García-Martínez et al., 2011). This result is due to the introgressed genes and/or to the linkage drag, as previously has been reported in processing tomatoes (Tanksley et al., 1998). The introgression of the TYLCV resistance is responsible for most of the yield decrease obtained in fresh tomato (Rubio et al., 2012). For this reason, we have developed breeding lines without TYLCV resistance. UMH 916 and UMH 972 have genetic resistance to ToMV, whereas UMH 1127 and UMH 1139 have genetic resistance to ToMV and TSWV. The four breeding lines showed similar or better marketable yield than the traditional cultivar Muchamiel 18 (M18) and the breeding line UMH 1200.

The breeding lines UMH 916, UMH 972, UMH 1127, and UMH 1139 were obtained by crossing a Muchamiel cultivar (accession M18, previously selected for fruit morphological characteristics, uniformity, and high yield) with the commercial cultivar Anastasia F1 (Seminis Vegetable Seeds, Saint Louis, MO), used as the donor parent of the Tm-2a, Sw-5, and Ty-1 genes (Pérez de Castro et al., 2007), conferring resistance to ToMV, TSWV, and TYLCV, respectively. Ten (for UMH 916 and UMH 972) and six (for UMH 1127 and UMH 1139) generations of modified backcrossing to the Muchamiel cultivar, with marker assisted selection for three virus resistance genes, were performed. Several trials under different infection conditions (mechanical inoculation for ToMV and natural infection for TSWV) were carried out to control the presence of the resistance alleles in the first backcross (BC) generations and the effectiveness of the molecular markers. In addition, a high selection pressure for Muchamiel characteristics (flattened and ribbed shape, green shoulder) and good agronomic behavior (proper fruit set, sufficient uniformity among fruits and yield) were applied during modified backcrossing. Progenies for each backcross generations were screened with molecular markers. All plants simultaneously containing all the introduced resistance genes (usually between five and 10 plants) were transplanted, and crossed with the recurrent parent. Only the best plants (between two and four) were selected for further backcrossing. After the selfing of a BC10 single triple heterozygous plant, followed by two generations of selfing and selection, the pure-breeding UMH 916 and UMH 972 lines, homozygous for Tm-2a (Table 1), were selected using molecular markers and multiplied by self-pollination in a greenhouse, under controlled conditions. The pure-breeding UMH 1127 and UMH 1139 lines, homozygous for Tm-2a and Sw-5 (Table 1), were selected and multiplied in the same way, after the selfing of a BC6 single triple heterozygous plant.

Genotype for each resistance gene (RR: resistant homozygous, ss: susceptible homozygous) for the new four breeding lines. The UMH 1200 breeding line and the accession M18 are included as reference. 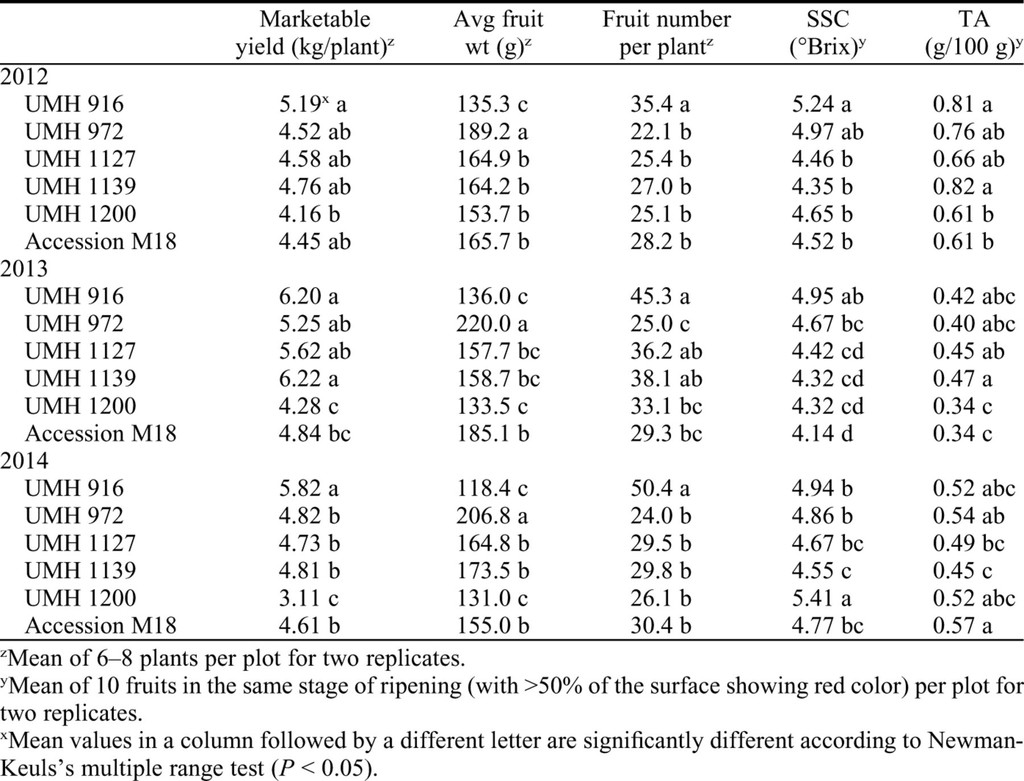 UMH 916 and UMH 972 have genetic resistance to ToMV, whereas UMH 1127 and UMH 1139 have genetic resistance to ToMV and TSWV, viruses that cause variable but intense damages in southeastern Spain tomato landrace crops, especially in open field conditions. These four breeding lines are available for cropping in the spring-summer production cycle, the most important cycle in the traditional area of cultivation for Muchamiel tomato, when the TYLCV incidence is less intense, due to the low population levels of the whitefly vector Bemisia tabaci (Genn.). These breeding lines allow farmers to obtain a harvest similar or better than the cultivar M18 and UMH 1200 breeding line (genetic resistant to ToMV, TSWV, and TYLCV), in a mesh-covered net house in the spring–summer crop cycle. As with previous releases produced by this breeding program, UMH 916, UMH 972, UMH 1127, and UMH 1139 are under study to be marketed by private companies. These breeding lines may be used to develop F1 hybrids by crossing them with other Muchamiel landraces to increase yield by using the genetic resistance in a heterozygous state, as well as to be used in breeding programs to facilitate the introgression of the resistance genes into other landraces. 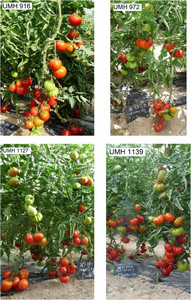