Cinnamomum camphora (L.) J. Presl is a typical tree species in the subtropical broad-leaved forest. It is native to China, south of the Yangtze River, southern Japan, Korea, and Vietnam, and has been introduced to many other countries (Li et al., 2013). In the 1800s, it was introduced to Australia and the southeastern United States, and has become naturalized in many areas (Natural Resources Conservation Service, 2010). Because of its broadly ovate crown and lush foliage, C. camphora is ideal for roadside plantings, windbreaks, and shade trees. It can also be used to extract camphor and camphor oil for pharmaceutical use and as a flavoring. At present, C. camphora is widely used as an important urban tree in many Chinese cities such as Hangzhou, Ningbo, and Taizhou (Zhejiang Province); Changsha and Changde (Hunan Province); Suzhou and Wuxi (Jiangsu Province); Nanchang (Jiangxi Province); and Mianyang (Sichuan Province). Therefore, breeding and selection of improved cultivars is important to enhance urban and landscape use. At the time of writing, six new cultivars were selected or bred. C. camphora ‘Longnaozhang L-1’ and C. camphora ‘Longnao 1’ can be used for the production of camphor, which have been selected or bred by the Hunan Province Xinhuang Camphor Development Co., Ltd. and the Jiangxi ProvinceForest Research Institute, respectively. ‘Fireworks Camphor Tree’ is the second registered ornamental cultivar of Cinnamomum and is characterized by its drooping branches. As leaf color is one of the most important ornamental traits of a tree species, breeding for variations in leaf colors is an important objective of new ornamental cultivars. After more than 10 years of continuous work, three cultivars: C. camphora ‘Yongjin’ (the first registered ornamental cultivar of Cinnamomum), C. camphora ‘Xiaguang’, and C. camphora ‘Yuhuang’, were bred by researchers in Ningbo Forestry Bureau of Zhejiang Province and Zhejiang Agriculture and Forestry University. These cultivars exhibit yellow or red leaves that stay on the branch for a longer period. These characteristics provide higher ornamental value to the cultivars compared with common camphor trees.

In Nov. 1998, we conducted a survey on the leaf color of roadside camphor trees in Haishu District, Ningbo, Zhejiang Province. Seeds from two superior trees were collected to raise seedlings in the following year. In May 1999, colors of the leaf, branch, and trunk were checked against the Pantone international color card C (Pantone Inc., 2008). A seedling was found obviously different from the others for its golden yellow (Pantone 101C) leaves and red (Pantone 192C) branches and trunk, and asexual propagation was then conducted. It has been found that these color traits are stable on the basis of 9-year observation. In addition, a special electrophoresis band was discovered through an intersimple sequence repeat (ISSR) analysis, suggesting that the clone was different from the others in genomic DNA (Wang et al., 2009). It was named ‘Yongjin’ (Fig. 1), and has been evaluated and registered as a new cultivar in Ningbo by the National Ministry of Forestry in China in 2009. The star-shaped flowers of C. camphora are borne in loose clusters, and they are bisexual and self-compatible, pollinate both by self- and cross-pollination (Fan, 2014). Therefore, the hybridization is a practicable breeding technique for this tree species. C. camphora ‘Xiaguang’ (Fig. 2) and C. camphora ‘Yuhuang’ (Fig. 3) are derived from C. camphora ‘Yongjin’. In April 2007 and 2008, a controlled pollination was made between C. camphora ‘Yongjin’ (♀) and common camphor tree LBXZ#5 (♂) (Fig. 4) at the Ningbo Forestry Nursery, Zhejiang, China. A total of 5500 seeds were collected and sowed using a routine procedure. On the basis of the color traits of leaves, branches, and trunk, two individuals were selected and propagated for further evaluation in May 2009. One of the two genotypes which was later registered as C. camphora ‘Xiaguang’ had brilliant red (Pantone 1785C) leaves and red (Pantone 185C) branches and trunk, and the other one registered as C. camphora ‘Yuhuang’ had Naples yellow (Pantone 127C) leaves and red (Pantone 1787C) branches and trunk. After 4 to 5 years of asexual propagation, the leaves, branches, and trunks of both genotypes exhibit stable color traits. These two genotypes were registered as new cultivars in Ningbo in 2012 and 2014, respectively, by the National Ministry of Forestry in China.

C. camphora ‘Yongjin’, C. camphora ‘Xiaguang’, and C. camphora ‘Yuhuang’ should be planted in full sunlight for their leaf color to be exhibited. Given that the apical buds of camphor tree grow slower than lateral buds, the lateral buds should be removed during the seedling stage. No severe diseases or pests have been observed at Ningbo Forestry Nursery, but freezing temperatures could cause damage to buds and leaves.

C. camphora ‘Yongjin’, C. camphora ‘Xiaguang’, and C. camphora ‘Yuhuang’ are propagated through grafting or cutting. Grafting is usually conducted from the end of February to the middle of March. Generally, seedlings that are 3 years old or more are selected as rootstocks, and the 2-year-old branches of the new cultivars are selected as scions for grafting at the position 50 cm above the ground (Wang et al., 2012). Cutting propagation could be performed either from April to May or from September to October. Current-year semi-lignified branches, 5 to 10 cm in length, are selected as cuttings. Yellow soil (a soil formed under broad-leaved forests in humid subtropical regions, chiefly on parent material from clayey shales) is commonly used as the cutting medium. About half to two-thirds of the cuttings should be inserted into the medium, and thorough watering is required thereafter. Suitable humidity and partial shade should be provided during the propagation. Practically, this could be done by covering the cuttings with plastic sheet and shading net. The cuttings could be transplanted in April of the following year. The survival rate of cuttings is ≈85%.

C. camphora ‘Yongjin’, C. camphora ‘Xiaguang’, and C. camphora ‘Yuhuang’ were evaluated and registered as new cultivars in Ningbo by the National Ministry of Forestry in China. China plant patents have been approved for ‘Yongjin’, ‘Xiaguang’ and ‘Yuhuang’ in 2009, 2012, and 2014 (20090009, 20120074, and 20140054), respectively. Propagation and production rights have not been assigned to any commercial company yet. 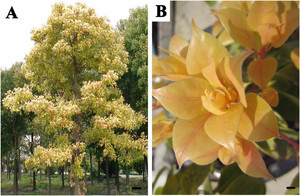 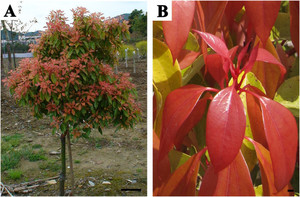 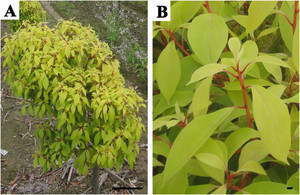 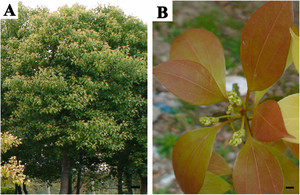