Litchi (Litchi chinensis Sonn., Sapindaceae) is an important subtropical fruit tree that originated in China. Due to the delicate flavor, pleasant appearance, and fragrance, it has been known as “one of the top four fruits” along with banana, pineapple and longan in Southern China. In 2010, the cultivated area of litchi in China was about 0.57 million hectares with a total production of 1.7 million tons. The litchi industry has been developed in other countries, including Madagascar, India, South Africa, Thailand, America, Israel, Mauritius, and Mexico (Chen et al., 2013). Litchi is generally propagated by seeds, stem cuttings, grafting, marcottage, and stooling. However, new litchi cultivars with improved and desired characteristics can only be selected from seedlings (Menzel, 1985). The germination performance of seeds and the seed placement in sowing are important to achieve seedlings (Aou-ouad et al., 2014; de Andrade et al., 2004).

Litchi seeds are considered to be “recalcitrant,” due to their high sensitivity to desiccation (Roberts, 1973). They quickly lose their viability if allowed to dry out after extraction from the fruits. Litchi seeds completely lost viability when they were kept outdoors for 2 d or indoors for 6 d (Ray and Sharma, 1987). Xia et al. (1990) found that litchi seeds germinated fully when harvested at 10 d before fruit maturity or at fruit ripening time, but entirely lost seed viability after 6 d of natural drying. Ray and Sharma (1987) pointed out that seed germinability was positively correlated with seed moisture content above the critical limit of 20% moisture content. Therefore, the seed moisture content must be retained to ensure high seed germination rates.

Seed imbibition is an important period for successful germination (Woodstock, 1988). Sufficient water is necessary for rehydrating enzymes and their substrates in preparation for seed germination (Bewley and Black, 1982). Especially, the first phase of imbibition characterized by the rapid water uptake plays a crucial role in seed germination success (Harb, 2013). This suggests that if the seeds imbibe water slowly from the soil, or cannot uptake sufficient water for normal germination, early death of seeds is likely to occur. Soaking before sowing enables a more rapid imbibition than is usually the case in a nursery bed, resulting in more rapid seed germination (Schmidt, 2000). Though litchi seeds are vulnerable to drying in field, soaking has not yet been applied in practice.

Temperature also affects seed germination. Too high or too low temperatures could decrease seed viability (Corbineau et al., 1986; Eberle et al., 2014). Litchi fruits are mainly harvested in June and July in China when the soil temperature reaches ≈40 °C. Seeds of 2-7-6 litchi cultivar incubated at 40 °C for more than 2 d exhibited an inhibition in the growth of radicle and plumule. Long-term exposure to 40 °C for more than 4 d reduced germination percentage of seeds, and there was a reduction in germination rate with an increase in exposure time (Fu et al., 2014b). Fu et al. (2014a) pointed out that the upper limit for seed germination of ‘Qiyueshu’ litchi was 42 °C. Exposure to temperatures exceeding 42 °C for 24 h caused an inhibition in seed germination and seedling emergence. Therefore, temperature may be an important influence factor for germination of litchi seeds.

Seed orientation and sowing depth both play important roles in seed germination and seedling emergence (Aou-ouad et al., 2014; Huang et al., 2007; Thomas, 1978). Recalcitrant seeds of coconut sown in horizontal orientation exhibited much quicker germination and better growth of seedlings (Thomas, 1978). Planting seeds of Balanites aegyptiaca horizontally or vertically with stalk end downward showed better germination (Elfeel, 2012). The seedling emergence was slower when seeds were sown at deeper depth in Rhamnus alaternus and R. ludovici-salvatoris (Aou-ouad et al., 2014). Though litchi seeds are all direct-seeded after extraction from the fruits, little research about the seed orientation and sowing depth has been reported in litchi.

Litchi seeds were seldom fully germinated when sown in a humid sand bed under shade or in carbonized rice hull (de Andrade et al., 2004; Prasad et al., 1996). We also observed that the traditional method of planting litchi seeds without any pretreatment resulted in inferior seedling uniformity and less efficiency in the production methods. Therefore, studies are needed to improve litchi seed germination methods. In the present study, we added soaking and presprout steps during seed germination before sowing litchi seeds. Specifically, we investigated the relationship between soaking and seed germination, and determined the appropriate soaking time for seed germination in litchi. Furthermore, we examined the effects of short-term high temperatures on germination of litchi seeds. Finally, the influence of seed orientation and burial depth on litchi seedling recruitment was studied. The objectives of these experiments were to find fast and efficient ways to increase the percentage of seed germination and seedling emergence, which are important for field production.

The litchi cultivars used in the experiments were late-maturing types. The harvest times for fruits of different cultivars were similar. Fully ripe fruits of different litchi cultivars that had good flavor and were ready to be eaten were harvested from trees grown in Litchi Germplasm Repository, Ministry of Agriculture, in Guangzhou, China. We removed remnants of pulp on the surface of seeds by washing with water. All seeds from different cultivars were plump and had developed normally. The following four experiments were separate, and seeds used in different experiments were from separate seed lots. Seeds were soaked in a plastic drum filled with water and the water was changed daily. Litchi seeds were presprouted on a stainless steel iron plate covered with wet gauze. The gauze was kept moist and the seeds were washed every 2 d to prevent mildew.

Fresh seeds of ten litchi cultivars (Shali, Heimiandeng, Huaizhi, Yeshengli, Tongshachihuaizhi, Jinzhong, 2-5-1, Maquechun, Budai, and Baitangli) were tested in this experiment. About 60 seeds of each cultivar were divided equally into two groups. In the control group, seeds of each cultivar were not soaked before presprouted by covering with wet gauze. In the treatment group, seeds were soaked in water for 48 h and then were presprouted by covering with wet gauze as described in the control group. The emergence of the radicle was regarded as the criterion for seed germination. The number of germinated seeds was counted daily, and final germination percentage of each cultivar was determined after 9 d.

We set a series of different temperatures to test the effects of short-term high temperature on germination of litchi seeds. There were 50 seeds in each treatment. Seeds of ‘Cuiye’ and ‘Seedling0795’ were soaked in water for 48 h, removed from the water and presprouted at 37, 38, 39, 40, 41, 42, 43, or 44 °C by covering with wet gauze in constant temperature incubator for 24 h, respectively. Subsequently, they were placed indoors to continue to grow, where the mean midday temperature was 33 ± 2 °C, and mean night temperature was 27 ± 2 °C. The control group was not subjected to high temperatures after soaking but was directly germinated indoors under the same temperature regime as the treatment groups above. The count of germinated seeds was made daily after the treated seeds were placed indoors. This experiment was run for a total of 14 d. Germination percentage and germination rate were calculated. Germination rate was expressed as the percentage of seeds germinated within 2 d after presprouting in indoor conditions. We chose 2 d because most seeds of two litchi cultivars had germinated (>80%) within 2 d under controlled conditions.

Seeds of ‘Zengchenggualv’ litchi were soaked in water for 48 h and were presprouted in indoor conditions. After the emergence of radicle, seeds were sown in four orientations (seed laid flat, seed laid on its side, seed laid vertically with the radicle upward, and seed laid vertically with the radicle downward). Seeds sown in each of the four orientations were placed in soil at three different depths of 2, 4, or 6 cm. Three replicates were used for each treatment and 10 seeds were sown in each replicate. A randomized block design was used in the experiment. Some seedlings began to emerge at the surface of soil on day 7, and the final percentage of seedling emergence was determined two weeks after sowing.

The data of seed germination and seedling emergence were statistically analyzed using SPSS 13.0 Statistical Software. Pearson chi-square test and continuity correction were used to examine the significance of differences in germination percentage between seeds soaked in water and those without the soaking treatment. Pearson correlation tests were used to determine the correlations of soaking time with germination percentage, and high temperatures with percentage and rate of germination. General linear model was used to test the effect of seed orientation and burial depth on seedling emergence. ANOVA was used to test the differences in seedling emergence.

Importance of soaking in seed germination.

The technique of soaking seeds before sowing is often used in agricultural practices, such as in pitaya, coconut, guava, and Magonia pubescens (Sapindaceae). Seeds imbibe water and trigger a chain of reactions resulting in seedlings (Bhanuprakash et al., 2008; de Macedo et al., 2009; Thomas, 1973; Zhao et al., 2005). Soaking seeds in water helps reduce the time required for germination, and improve germination percentage (Hartmann and Kester, 1979). However, soaking seeds has not been used in germination of litchi seeds although they are sensitive to desiccation. Our results showed that seeds of almost all tested litchi cultivars soaked in water had higher germination percentage than those without the soaking treatment, and seeds of most litchi cultivars steeped in water were fully germinated. However, there was no significant difference between the soaked seeds of the litchi cultivar Yeshengli and seeds without soaking. The imbibition process both occurred when seeds were submersed in water and when they were sown immediately in humid sand, but soaking enabled a quicker imbibition and might be of benefit for rapid seed germination (Schmidt, 2000).

Effects of seed orientation and burial depth on seedling emergence.

All litchi seeds used in our experiments were plump with normal embryo development. But in some other excellent litchi cultivars with desired characteristics that tended to be inherited by female parent, have some seeds that develop abnormally with partially abortive embryos and also vary in size according to the degree of abortion (Lu et al., 2001). These seeds that exhibit a slightly shriveled appearance cannot germinate easily, and the seedlings that do emerge exhibit inferior growth. Further studies on these types of seeds could provide more choices for parent selection and increase the probability of better offspring in artificial cross breeding of litchi.

In the present study, we improved the seed germination method in litchi by adding soaking and presprout steps before sowing in the soil, and explored various sowing methods. Soaking increased seed germination percentage, and 90% to 100% germination could be obtained with soaking for 26–54 h. Temperatures above 37 °C reduced the germination rate. Placing seeds flat and on their sides, orienting the radicle downward, and covering with 2 cm of medium exhibited the best seedling emergence. 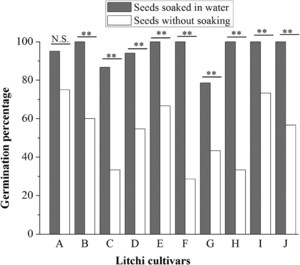 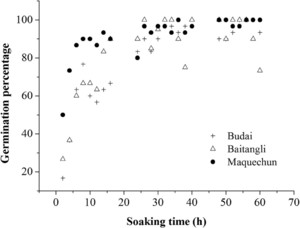 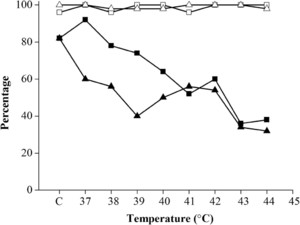 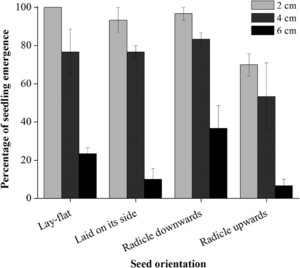