‘Cascade Harvest’ is a new floricane fruiting raspberry cultivar (Rubus idaeus L.) jointly released by Washington State University (WSU), Oregon State University (OSU), and the U.S. Department of Agriculture (USDA). ‘Cascade Harvest’ produces a high yield of large, firm fruit suited to machine harvesting, and is well suited for processing. Because of its flavor, large fruit, attractive appearance and easy fruit release at an early stage of maturity, ‘Cascade Harvest’ may also be suitable for fresh market use. It is root rot [Phytophthora rubi (W.F. Wilcox & J.M. Duncan) W.A. Man in‘t Veld] tolerant and resistant to the common strain of Raspberry bushy dwarf virus (RBDV). Because of its adaptation to machine harvest, high yield, tolerance to root rot and RBDV resistance, it is recommended as a possible replacement for ‘Meeker’, the primary cultivar of the Pacific Northwest raspberry industry.

‘Cascade Harvest’ was selected from a cross of ‘Cascade Dawn’ and WSU 1145 (Fig. 1) made in 1998 at Washington State University Puyallup Research and Extension Center (WSU Puyallup). ‘Cascade Dawn’ was released from the WSU program in 2005 (Moore, 2006). WSU 1145 is a highly root rot tolerant selection that was selected from a cross between ‘Newburgh’ and WSU 0933 (‘Centennial’ × ‘Haida’). Seedlings from the cross were planted at the WSU Puyallup Goss Farm in 1999. ‘Cascade Harvest’ was selected from the seedlings in 2001 and designated as WSU 1507.

After ‘Cascade Harvest’ was selected, it was propagated by tissue culture from primocane shoot tips. It was planted in nonreplicated 10 plant plots with a cooperating grower in Lynden, WA in 2002, 2005, and 2010 and with another grower in Burlington, WA in 2003. These plantings were maintained by the growers using typical commercial methods. The plantings were subjectively evaluated weekly for adaptation to machine harvesting during the harvest season for two fruiting seasons. The 2003 planting was harvested beginning in 2004 and all other plantings were harvested beginning 2 years after planting.

Fruit of ‘Cascade Harvest’ were harvested from replicated plantings at WSU Puyallup planted in 2005 and 2009. Plantings were arranged in randomized complete block designs with three replications of plots consisting of three plants, with 0.9 m between plants and 2.4 m between rows. The plantings were not sprayed for disease, but the planting established in 2009 was sprayed for spotted wing drosophila (Drosophila suzukii Matsumura). Fruit were harvested one or two times a week depending on environmental conditions and rate of ripening. The weight of sound fruit and fruit with rot (mainly botrytis) was determined at each harvest. Yield was the sum of sound fruit and fruit with rot. The average fruit weight for the season is a weighted mean based on the weight of a randomly selected 25 fruit subsample from each plot from each harvest and the yield for each harvest. Fruit firmness was measured as the force required to close the opening of the fruit using a Hunter Spring Mechanical Force Gauge (Series L; Ametek, Hatfield, PA) and was calculated as a weighted mean based on a randomly selected five-fruit subsample from each plot from each harvest.

Fruit samples were collected from machine harvest plots in Burlington, WA in 2005 and in 2008 from plots in Lynden, WA. Samples of ≈300 g were collected from five dates in 2005 and two dates in 2008. The samples were analyzed for total anthocyanins, soluble solids, pH, and titratable acidity. The pH of the juice was measured with a Corning 430 pH meter (Corning, NY), titratable acidity by titration to pH 8.1 with 0.1 N NaOH, soluble solids with a Atago PAL-1 refractometer (Atago USA, Inc., Bellevue, WA) and the total anthocyanins as described by Torre and Barritt (1977). Fruit samples were hand harvested from plots at WSU Puyallup on 6 July 2012. ‘Cascade Harvest’ was compared with its parents, ‘Cascade Dawn’ and WSU 1145 for fruit color measured with a Minolta CR-400 colorimeter (Konica Minolta Sensing Americas, Inc., Ramsey, NJ) and for weight and dimensions of the fruit. Measurements were recorded in L*, a*, and b* (McGuire, 1992) based on calibration to a standard white reflective plate and the CIE Illuminant C (Commission Internationale de l’Eclariage, Vienna). Fruit samples for ‘Cascade Harvest’, ‘Cascade Delight’, and ‘Tulameen’ were harvested on 16 July 2012, stored for 4 d at 4 °C, then held at room temperature (20 °C) for 4 h. Fruit weight, firmness, and color measurements were taken on fruit before storage and after storage. Since firmness measurement was a destructive measurement, the initial firmness was measured on a separate set of fruit than the stored fruit. All other storage measurements were made on the same fruit both before and after storage. 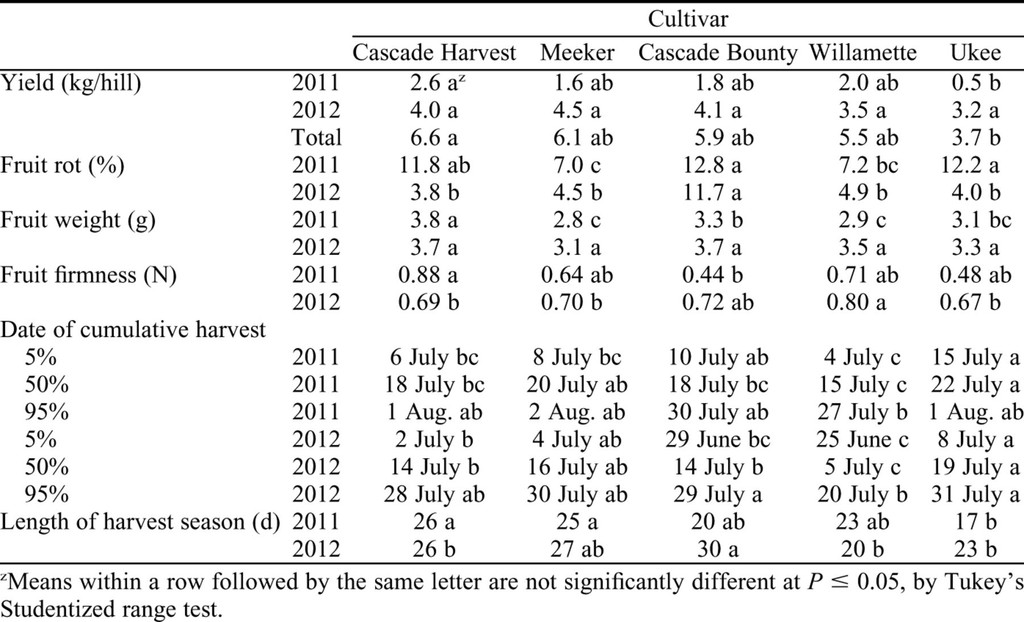 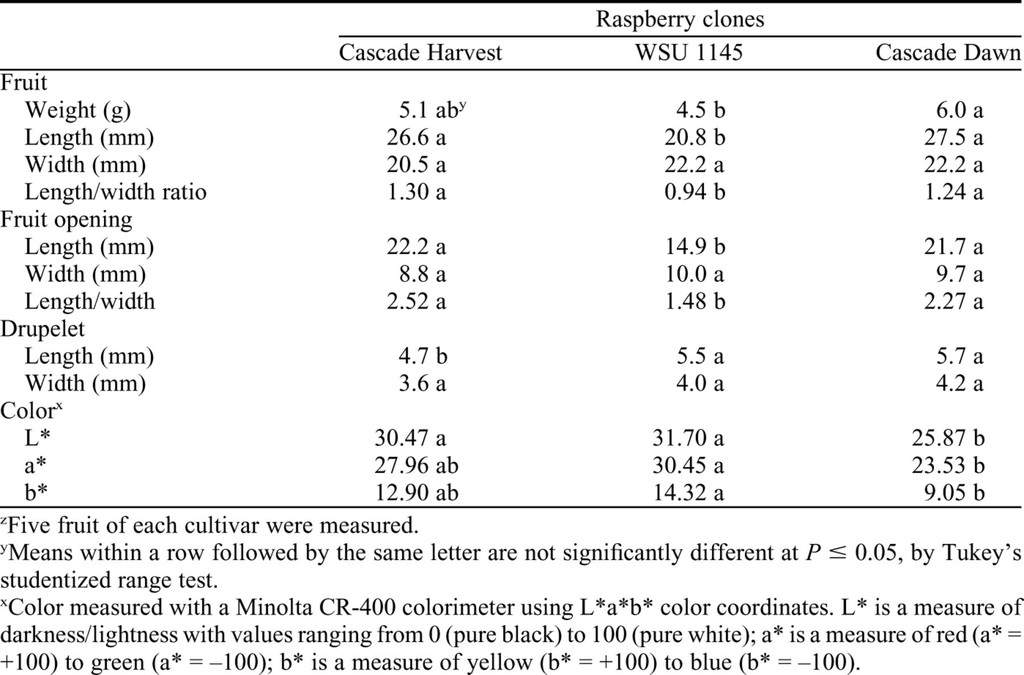 Changes in fruit weight, firmness, and color during storage for fruit of three red raspberry cultivars harvested from plots at Puyallup, WA.z 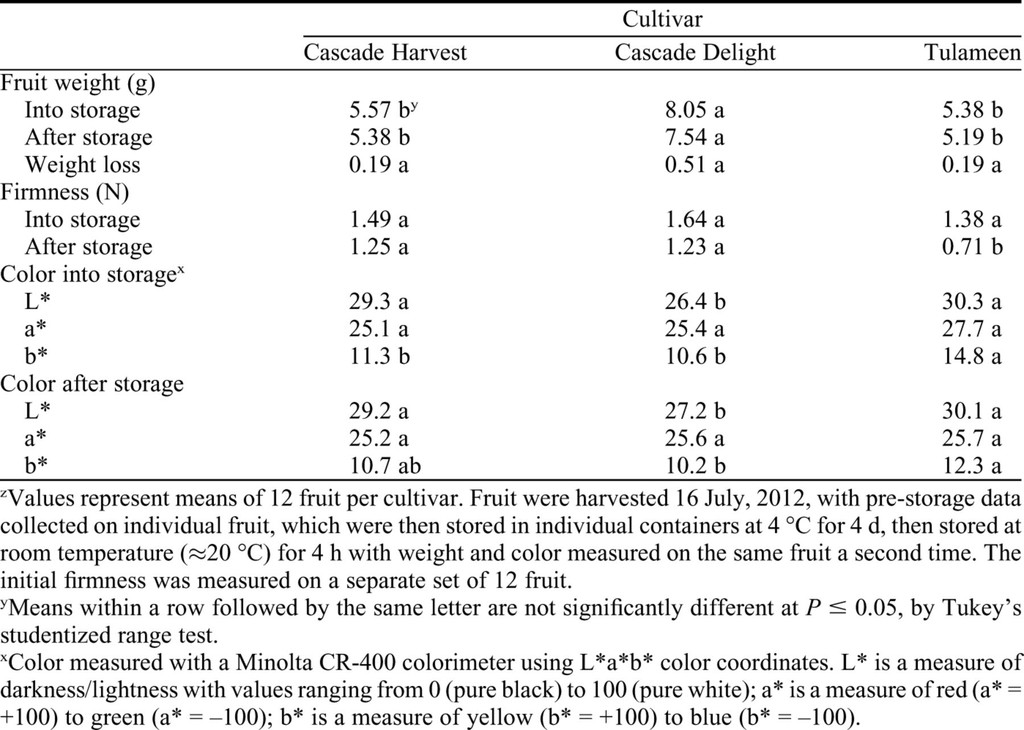 ‘Cascade Harvest’ was evaluated for susceptibility to Phytophthora root rot in naturally infested plots at WSU Puyallup Goss Farm in plantings established in 2005. The presence of P. rubi in these plots was verified via polymerase chain reaction (PCR). Four plants of each clone were planted in a completely randomized design. Plants were subjectively rated for vigor in the fall of each year from 0 to 5, with 0 being dead and 5 a healthy and vigorous plant. In the fall of the 4th year, ‘Cascade Harvest’ had a rating of 5.0 for all four plants, while ‘Willamette’ had an average of 1.75 and ‘Meeker’ was 0.5. Based on this trial, ‘Cascade Harvest’ is expected to have a very good level of root rot tolerance.

‘Cascade Harvest’ tested virus negative after graft inoculation using leaflets from a field-grown plant naturally infected with RBDV. Plants of ‘Cascade Harvest’ that have been exposed to virus-infected pollen in the field for over 5 years have continued to test negative for RBDV. On the basis of this testing, ‘Cascade Harvest’ appears to be resistant to the common strain of RBDV.

Plants of ‘Cascade Harvest’ were screened in duplicate in the greenhouse for resistance to the raspberry aphid, Amphorophora agathonica Hottes, the primary vector for Raspberry leaf mottle virus, Raspberry latent virus, Black raspberry necrosis virus, and Rubus yellow net virus in North America. Similar to its grandparent ‘Newburgh’, ‘Cascade Harvest’ was determined to be resistant to biotypes A and C and susceptible to biotypes B, D, E, and F of A. agathonica (Dossett and Kempler, 2012). 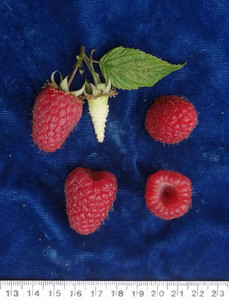