This article presents the attributes of the first East African highland banana hybrid, ‘Kiwangaazi’ (Fig. 1), which was recently selected, released, and added to the national cultivar list in Uganda. The ‘matooke’ hybrid ‘Kiwangaazi’ was conventionally bred at Kawanda by crossing the tetraploid hybrid ‘1201k-1’ (‘Nakawere’ AAA × ‘Calcutta4’ AA) with the improved diploid ‘SH3217’ AA. The main target was black Sigatoka resistance, a disease caused by the fungal pathogen Mycosphaerella fijiensis, ranked as the most important constraint to the production of the East African highland bananas, especially in the low lands (covering most of central and eastern Uganda). ‘Kiwangaazi’, together with other hybrids was evaluated for black Sigatoka response, nematode and weevil damage, yield, and consumer acceptability. The cultivar was evaluated under the code ‘M9’, and released by the national variety release committee as ‘KABANA 6H’. The name ‘Kiwangaazi’ was coined by farmers who participated in the on-farm evaluation studies. In the local language (Luganda), ‘Kiwangaazi’ means “long lasting.” Due to high pest and disease pressure, banana plantations can only last for 3–5 years, especially in central and eastern Uganda. However, due to its pests and disease tolerance, farmers observed that ‘M9’ plants remain vigorous after 5 years, hence the name ‘Kiwangaazi’.

Like the East African highland cooking bananas, ‘Kiwangaazi’ is a triploid AAA, but clearly distinct from any other existing genotypes. Traits that distinguish ‘Kiwangaazi’ from the parents and other closely related cultivars are presented in Tables 1 and 2. Whereas most of the East African cooking bananas have deep green leaves, pseudostems, and fruits, ‘Kiwangaazi’ has pale, shiny color on the leaves, pseudostem, and fruits (Tables 1 and 2).

Distinguishing features of ‘Kiwangaazi’ (M9) from the female parent ‘Nakawere’.

The cultivar ‘Kiwangaazi’ is maintained by the National Banana Research Program of NARO in Uganda. Farmers can access tissue culture plant from private tissue culture laboratories in Uganda and thousands of farmers have participated in the evaluation and promotion of ‘Kiwangaazi’.

Performance in the field.

The response of four promising banana hybrids to black Sigatoka, the primary target constraint, is presented in Table 3. Tissue culture plants were established in randomized complete block design at a spacing of 3 m × 3 m, manure was applied at planting, and regular banana management was followed (Tushemereirwe et al., 2003). Using the youngest leaf with spots and the number of standing leaves at flowering as indicators of resistance (Craenen, 1998), ‘Kiwangaazi’ produces more leaves than the local variety ‘Mbwazirume’ (Table 3) and the symptoms of black Sigatoka are observed on older leaves subsequently availing more photosynthetic leaf area to allow proper fruit filling. This may partially explain the high yield potential of ‘Kiwangaazi’ as indicated by bunch weight (Table 3). Bunch weight is one of the most important criteria used by farmers to select cultivars they want to grow (Akankwasa et al., 2013; Melinda et al., 2007).

We have previously reported ‘Kiwangaazi’ as a tall cultivar (plant height > 3 m), which takes longer for the fruits to mature (about 4 months for fruit filling) (Ssali et al., 2010). Tall banana varieties are usually susceptible to breakage by wind but ‘Kiwangaazi’ is protected by its wider girth (>50 cm—at 1 m height).

The results of the assessment of the most promising hybrids’ reaction to the banana weevil (Cosmopolites sordidus, Germar), the most elusive banana pest in Uganda (Gold et al., 2004), are presented in Table 4. In this field experiment, 120 tissue culture plants of each hybrid were established to assess their reaction to the banana weevil. Together with two other banana cultivars, a known resistant variety ‘Yangambi KM5’ and the highly susceptible East African highland banana ‘Atwarira’, the plants were spaced at 3 m × 3 m, manure was applied at planting, and regular banana management was followed (Tushemereirwe et al., 2003). The plants were infested with 10 weevils (female: male ratio of 1:1) at 9 months after planting and corm damage assessment done at harvest (Kiggundu et al., 2003). Total number of mats per genotype in the trial was counted at a 6-month interval. Our results show that ‘Kiwangaazi’ had considerable tolerance to the banana weevils (Table 4). This banana weevil tolerance of ‘Kiwangaazi’ is further highlighted by a significantly low mat disappearance rate of 8.5% at Kawanda (central Uganda) over a period of 5 years in comparison with the highly susceptible local variety ‘Atwalira’ (70.6%; Table 4). Previous research has attributed banana weevil resistance to biophysical factors like corm diameter, resin/sap production, corm dry matter content, corm hardness, and suckering ability (number of suckers) (Kiggundu 2000). Generally antibiosis (factors affecting larval performance) rather than antixenosis (attraction) appear to be the most important resistance mechanism in banana (Gold et al., 2001).

Response of East Africa highland banana hybrids to weevils (based on total cross sectional damage) and mat disappearance over a 5-year period in central Uganda.

The banana weevils have been contraindicated in the short plantation life of banana, especially in central Uganda (Tushemereirwe et al., 2001). Therefore, the results imply that ‘Kiwangaazi’ could be handy in addressing the banana production constraints, especially in central Uganda where the growing traditional cultivars have become difficult due to these pests. This implies that hybrid ‘Kiwangaazi’ will solve the long-standing problem of short plantation life caused largely by weevils.

The hybrid reaction to the banana-burrowing nematodes, Radopholus similis, in a pot assay are presented in Table 5. R. similis has been identified as the most destructive nematode species in Uganda (Speijer and De Waele, 2001). Results indicated that ‘Kiwangaazi’ had a lower percentage root necrosis than the susceptible control, implying that it was tolerant to nematode damage. Nematodes infect the roots, causing them to rot as they feed. This results in interferences in water and nutrient uptake by plants in addition to week anchorage, resulting in toppling of plants. Lignin and phenolic compounds might be involved in nematode resistance mechanisms in Musa (Fogain and Gowen, 1996; Valette et al., 1998). 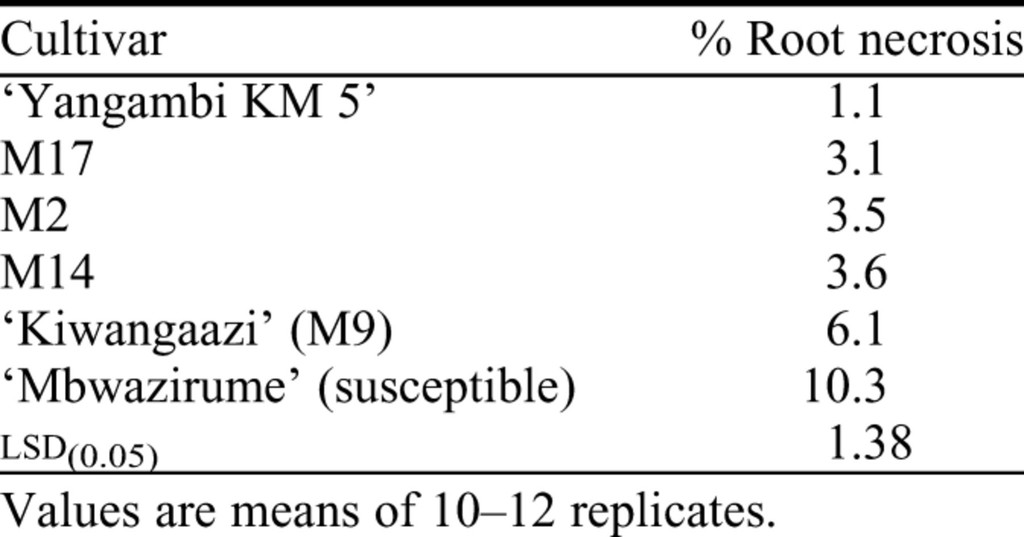 To satisfy end-user need, it is imperative that the developed hybrids balance high yields and resistance to pests and diseases with culinary attributes (Nowakunda and Tushemereirwe, 2004). For this reason, the hybrids’ culinary attributes were assessed using consumer methods (Nowakunda et al., 2000) of sensory evaluation techniques. Consumer acceptability tests were conducted to document feedback from end-users. Briefly, 40 consumers assessed and scored their perception for sensory parameters, namely flavor, taste, texture, and color of the food when cooked based on a five-point Likert scale (5 = excellent, 4 = good, 3 = fair, 2 = bad, and 1 = very bad) (Dadzie and Orchard, 1997). Hybrid ‘Kiwangaazi’ (‘KABANA 6H’) was consistently scored good for taste, texture, and color by most consumers as indicated in Figure 2. Compared with other hybrids, ‘Kiwangaazi’ was rated closet to the local control ‘Mbwazirume’ for all the consumer attributes. Combined with its tolerance to the banana weevils, nematodes, and black Sigatoka, this hybrid appeared to have fairly balanced traits, hence potential for end-user acceptability.

The ‘matooke’ hybrid ‘Kiwangaazi’ was consistently selected as the most preferred variety among those that it has been rated against. This was in respect to agronomic attributes, pests, disease resistance, and end-user acceptability. The genotype combines attributes that address the problems that are constraining banana production, especially in central Uganda. The National Banana Research Program filed for its release by the Ministry of Agriculture’s variety release committee and for its inclusion on the Uganda national cultivar list. It was henceforth released on 16 Dec. 2010.

Though accepted in all agro-ecological zones of Uganda where it was evaluated, the cultivar is recommended mainly for farmers in central, mid-western, and eastern Uganda where the growing of traditional cultivars is increasingly becoming difficult, and the whole of the northern region where farmers have just adopted banana cultivation.

‘Kiwangaazi’ the first East African highland banana hybrid to be released in Uganda. Attributes include consumer acceptability, resistance to black Sigatoka and tolerance to banana weevils and burrowing nematodes. 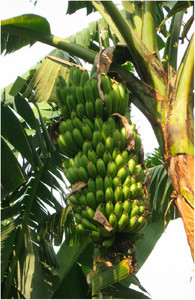 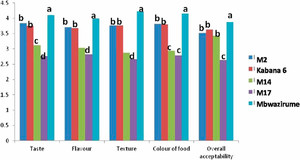