Development of a New Hybrid Between Prunus tomentosa Thunb. and Prunus salicina Lindl.

An interspecific hybrid between Prunus tomentosa and P. salicina was produced through controlled pollination and confirmed by comparison of morphological characters and DNA markers. Morphological traits were intermediate between the two parents and fruit are much larger than that of P. tomentosa. Trees grafted on P. tomentosa rootstock are compact, cold hardy, precocious, and productive. It is new and potentially useful stone fruit germplasm for commercial production and further breeding in Prunus.

An interspecific hybrid between Prunus tomentosa and P. salicina was produced through controlled pollination and confirmed by comparison of morphological characters and DNA markers. Morphological traits were intermediate between the two parents and fruit are much larger than that of P. tomentosa. Trees grafted on P. tomentosa rootstock are compact, cold hardy, precocious, and productive. It is new and potentially useful stone fruit germplasm for commercial production and further breeding in Prunus.

Prunus tomentosa Thunb. (2n = 16) and P. salicina Lindl. (2n = 16) of the family Rosaceae belong to different subgenera. Prunus tomentosa is in the subgenus Cerasus, while P. salicina is in the subgenus Prunophora (Ingram, 1948; Rehder, 1940). Both species are native to China and have been cultivated for over 2000 years (Yü and Li, 1986). Prunus tomentosa is a cold tolerant species and can endure winter temperatures as low as −40 °C. It is self-pollinated with fruits resistant to rain cracking and ripening synchronously (Zhang et al., 2008). Small fruit size (0.4–2.85 g) has been one of the major factors limiting its development. Prunus salicina is one of the important commercial stone fruits both in China and internationally and is valued for its large fruit size (5–90 g) and good quality. However, most cultivars require pollination trees to get good harvest (Zhang, 1990).

Hybridization between species in Prunus is possible and a number of useful interspecific hybrids have been reported (Burbank, 1914; Felipe, 2009; Shoferistov, 1988). Some hybrids have been widely used in fruit production either as scion cultivars or rootstocks. A hybrid rootstock for peach was derived from a cross of P. tomentosa and P. cerasifera (Warner, 1998). However, hybridization between P. tomentosa and P. salicina has not been reported previously. Hybridization of these two species could potentially combine the cold hardiness and self-compatibility of P. tomentosa with large fruit size of P. salicina and broaden the genetic base for further breeding within this genus.

The objective of this research was to characterize the morphology of the hybrid and both parents and to validate the hybridity using molecular markers. This article reports the first breeding and validation of an interspecific hybrid between P. tomentosa and P. salicina.

The hybrid was selected from a group of seedlings from a controlled cross between P. tomentosa (female parent) and P. salicina (male parent) in May 1986 in Shangzhi County, Heilongjiang Province, China (45°14′N, 127°58′E). Female parents were 7- to 10-year-old trees of P. tomentosa with large fruit size (2.3 g average) and were selected locally. The male parent was a cold hardy cultivar of P. salicina (‘Xiaobenli’) with fruit weight ranging from 40 to 60 g. One tree (putative hybrid) was distinct in showing larger fruit that ripened about 15 d later than other progeny. An individual plant selection was made by Mr. Jinsheng Liu in 1990, who also conducted the evaluation of the hybrid for 6 years. Scientific evaluation and description were carried out in the Liaoning Institute of Pomology and the Berry Institute of Heilongjiang province.

Characterization of vegetative traits and fruits was based on almond descriptors developed by the International Plant Genetic Resources Institute (IPGRI) (Gulcan, 1985) as given in Table 1 and Figures 1–4.

Morphological comparison of P. tomentosa (female) and P. salicina (male) with the hybrid. 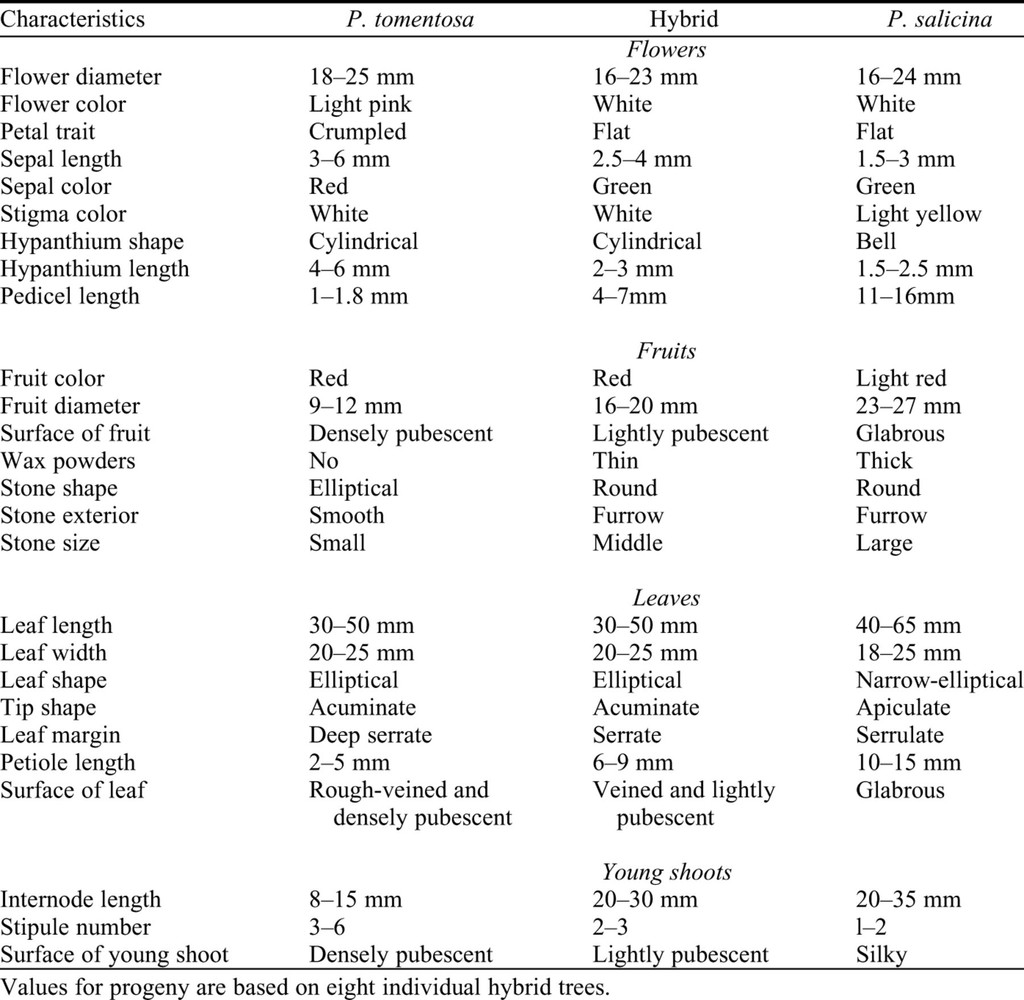 Six DNA samples were prepared, two from P. tomentosa, two from accessions (‘Xiaobenli’ and ‘Longyuanquli’) of P. salicina, and two from the putative hybrid. Genomic DNA extraction from young expanded terminal leaves was following (Zhang et al., 2008). Extracted genomic DNA was PCR-amplified using one pairs of microsatellite primers (UDP96-003) selected from previous report (Zhang et al., 2008). The PCR program included an initial denaturation step at 94 °C for 4 min, followed by 29 cycles of 45 s at 94 °C, 45 s at 59, and 45 s at 72 °C. The amplification products were loaded on a 6% nondenatured polyacrylamide gel and the gel was stained with silver nitrate.

Hybrid trees were grown in Heilongjiang, Jilin, and Liaoning provinces in the northeast of China (latitude 40°28′N to 47°24′N; longitude 122°24′E to 127°58′E) to evaluate performance. In these areas, the absolute minimum temperature in January ranges from −30 °C to −40 °C and it can reach −45 °C in extreme years (Liu et al., 2014). Fifty 2- to 3-year-old hybrid trees grafted onto P. tomentosa rootstock were evaluated for cold resistance respectively in Shanootgzhi County (Heilongjiang province), Changchun City (Jilin province), and Xiongyue Town (Liaoning province) in 2007–08. No cold injury was observed in flower buds, leaf buds, or branches after winters and trees grew well at all locations, which were representative of U.S. Department of Agriculture (USDA) hardiness zones 1b and 2a.

Although the hybrid grew well on deep sandy soil, it showed adaptation to a wide range of soil types such as sandy, clay, loamy, or combinations of the three textures. The hybrid is being released primarily for fresh fruit consumption in cold climatic zones where only rare cold-resistant fruits can survive and produce fruit. It can potentially be of importance for future breeding efforts in Prunus.

Extracted DNA of parents and hybrid was PCR-amplified using one pair of microsatellite primers UDP96-003 (forward: TTGCTCAAAAGTGTCGTTGC; reverse: ACACGTAGTGCAACACTGGC) developed by Cipriani et al. (1999). A distinct polymorphism was observed between parents at bands revealed 85 and 90 bps. Prunus salicina showed only the single 85 bps, while P. tomentosa showed only the 90 bps (Zhang et al., 2008). The hybrid showed the both bands (Fig. 5), which confirmed that it is an interspecific hybrid between P. salicina and P. tomentosa.

Propagation of the hybrid can be achieved successfully by grafting soft or hard scion wood onto rootstocks of either P. tomentosa or P. salicina. June to July was the best time for T-budding and August was best for chip-budding. Branch-grafting using hardwood scions was also successful in April. The hybrid also proved graft compatible with most cultivars of P. salicina, P. persica, and P. armeniaca (Ingram, 1948; Rehder, 1940).

Comparison of flowers between parents and interspecific hybrid. Left: P. tomentosa. Middle: hybrid. Right: P. salicina. The length of hypanthium and pedicel of the hybrid flower are intermediate between the parents.

Comparison of fruit of P. tomentosa and its hybrid. Upper: P. tomentosa. Lower: hybrid. Fruits of hybrid are much larger than fruits of P. tomentosa, although they are not completely mature compared with the tomentosa cherries.

Fruit on a hybrid tree. 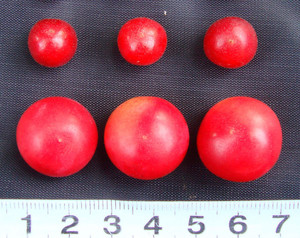 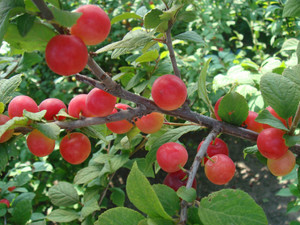 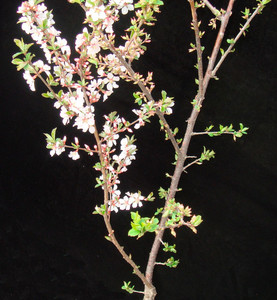