Oakleaf hydrangea (Hydrangea quercifolia Bartr.; Hydrangeaceae) is a woody shrub native to the southeastern United States, where it grows in calcareous soils in the understory of open woodlands (McClintock, 1957). There are ≈70 species in the genus Hydrangea with H. macrophylla (broadleaf or bigleaf hydrangea) accounting for the largest share of breeding and improvement work. Together, sales of Hydrangea species totaled over $73,000,000 in 2007 (USDA Census of Agriculture, 2007), making the genus one of the most economically important in the ornamental nursery industry.

Hydrangea quercifolia grows to 3 m or taller in height with a spread equal to or greater than the height as a result of vigorous spread by stolons (Dirr, 2009). Plants have an upright, small-branched, mounded habit. White to cream-colored conical inflorescences up to 30 cm long are produced in early summer. Inflorescences consist of large sterile sepals and inconspicuous fertile flowers. Sepals often turn an attractive pink or red color as they age. Mahogany red fall foliage and exfoliating bark provide fall and winter interest in the landscape.

At least 40 oakleaf hydrangea cultivars have been described (Dirr, 2009; Reed, 2010; van Gelderen and van Gelderen, 2004). Cultivars differ primarily in plant size and floral characteristics. Although most H. quercifolia cultivars reach at least 2 m in height, large and compact forms are available. The cultivars Alice and Alison were reported to reach 4 m and 3 m in height, respectively (Dirr, 2009). Compact forms are of special interest to the nursery industry for use as residential landscape plants. Two compact cultivars, Pee Wee and Sikes Dwarf, reach only to 1 m in height but lack some of the attractive floral traits of other cultivars. Two new compact selections were introduced in 2010 by the U.S. National Arboretum. ‘Munchkin’, a result of crossing two open-pollinated selections from ‘Sikes Dwarf’, grows to 0.9 m in height and possesses an attractive rounded habit with flowers that age to a deep pink (Reed, 2010). ‘Ruby Slippers’, an F2 hybrid between ‘Snow Queen’ and ‘Pee Wee’, is slightly larger and less rounded than ‘Munchkin’ with flowers held strongly above the foliage and aging to a deep rose red color (Reed, 2010).

Where most cultivars produce single flowers, ‘Snowflake’ produces hose-in-hose double flowers. Hydrangea quercifolia ‘Alison’ produces an equal mix of sterile and fertile flowers, ‘Snowflake’ is known for producing large and numerous sterile flowers, and cultivars such as ‘Harmony’, ‘Roanoke’, and ‘Vaughn’s Lillie’ produce only sterile flowers. The sepals of most varieties turn pink or brown with age. ‘Alice’ and ‘Amethyst’ develop some of the deepest pink colors with aging, whereas the sepals of ‘Ruby Slippers’ develop into a vibrant red color. Hydrangea quercifolia cultivars flower for ≈6 weeks in early summer, from approximately mid-May to the end of June in zone 7. Development of an attractive, landscape quality oakleaf hydrangea with a shifted bloom period would be an important addition to the appeal of this species in the landscape.

Controlled hybridizations were made in 1998 between H. quercifolia ‘Snow Queen’ and ‘Pee Wee’. In 2001, 10 of the most attractive ‘Snow Queen’ × ‘Pee Wee’ progeny were intercrossed using bulked pollen from the 10 selections. A seedling from this second-generation population was selected for its abundant flowering and large, upright inflorescences that age to a deep pink color. In 2011, plants of this selection were sent for evaluation to nursery and university cooperators in Florida, Georgia, Maryland, New Jersey, North Carolina, Ohio, Oregon, Pennsylvania, South Carolina, Tennessee, Texas, and Washington. After evaluation in these locations, this selection was released in 2013 under the name ‘Queen of Hearts’. ‘Queen of Hearts’ is the third release of the hydrangea improvement program at the U.S. National Arboretum’s McMinnville, TN, work site, which is located at the Tennessee State University Otis L. Floyd Nursery Research Center.

The cultivar name ‘Queen of Hearts’ was registered in 2014 with the International Cultivar Registration Authority for woody plant genera (Stefan Lura, U.S. National Arboretum, 3501 New York Avenue, Washington, DC 20002-1958) in accordance with the International Code of Nomenclature for Cultivated Plants (Brickell et al., 2004). A herbarium specimen has been deposited at the U.S. National Arboretum Herbarium as a cultivar standard.

Hydrangea quercifolia ‘Queen of Hearts’ (NA 79748, PI 668118) is a deciduous rounded shrub (Fig. 1) that reached 195 cm high and 340 cm wide after 11 years of growth in McMinnville, TN (USDA Hardiness Zone 7a; USDA Plant Hardiness Zone Map, 2012; Waynesboro silt loam) under full sun conditions. Mature leaves are pinnately lobed in outline with five to seven lobes, truncate at the base, up to 14.5 cm long and 16 cm wide, lobes broad, dentate, and sometimes slightly lobed. Foliage is medium green [Royal Horticultural Society (RHS) 137A-B; Royal Horticulture Society, 2007] on the adaxial leaf surface changing to various shades of mahogany red (RHS 183A-C, 185A, 187A) in the fall. Flowering occurs in early summer. Inflorescences are up to 30 cm in length and 12.5 cm in diameter and are held above the foliage. At full flower, the exterior surface of the inflorescence is almost completely covered by showy sepals. Flowers open white (RH 157A-B). Sepals slowly turn pink and then deepen to a vibrant rose color (RHS 55A). Flowers mature into dark brown seed capsules that persist through the winter.

‘Queen of Hearts’ prefers moist, moderately fertile, well-drained soil. It is hardy in U.S. Hardiness Zones 5 to 8. Young plants can be tender and should be protected in Zone 5; stems and buds may be injured when winter temperatures reach –10 °F. This cultivar can be grown in full sun or partial shade and will benefit from partial shade and supplemental watering in USDA Hardiness Zones 7 and 8. Like all oakleaf hydrangeas, loss of terminal buds resulting from winter injury or pruning will prevent flowering the next summer; plants should be pruned immediately after flowers begin to fade in midsummer.

Hydrangea quercifolia ‘Queen of Hearts’ may be used as specimen plants, in mass plantings, and along shrub borders. It is especially useful for mass planting in shady situations, although blooms will be less prolific. This cultivar was selected for its attractive flowers and late flowering time. The inflorescences, which are large, abundant, and held strongly above the foliage, offer excellent visual appeal. Plants bloom ≈7 to 10 d later than standard H. quercifolia cultivars, and inflorescences remain attractive after those of other cultivars have faded. Mahogany red leaves offer visual appeal into early fall and exfoliating stem bark provides winter interest.

‘Queen of Hearts’ can be propagated by softwood cuttings using intermittent mist and 4000 ppm indole 3-butyric acid with rooting occurring in 4 to 6 weeks. ‘Queen of Hearts’ can be micropropagated using previously described techniques (Ruffoni et al., 2013). Plants are suitable for field or container production and will produce flowers on small plants the first summer after propagation.

Like all woody ornamental plants released from the U.S. National Arboretum, ‘Queen of Hearts’ is not patented so may be propagated and sold freely. Plants are available from wholesale, mail order, and a limited number of retail nurseries (source list available on request). The National Arboretum does not have plants of these cultivars available for general distribution but can supply cuttings to nurseries wanting to propagate this cultivar.

Field-grown plant of ‘Queen of Hearts’ produces large, cream-colored inflorescences (A) that deepen to a vibrant rose pink (B). 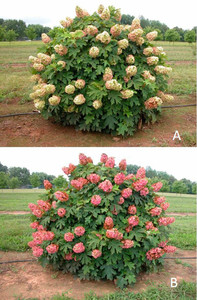