‘Perpetua’ (U.S. Plant Patent 24,209, PI 674714) is a new ornamental blueberry (Vaccinium hybrid) targeted for the home gardener and landscape ornamental trade from the U.S. Department of Agriculture—Agricultural Research Service (USDA-ARS) breeding program in Corvallis, OR, released in cooperation with Oregon State University’s Agricultural Experiment Station (Finn, 2014). ‘Perpetua’ is the first strongly repeat fruiting (remontant, off-season, perpetual flowering) blueberry developed from northern adapted germplasm. In Oregon, the cultivar flowers in April with other blueberry cultivars, ripens a crop of small fruit in late June, and then begins flowering on new growth in July–August with a second crop in August–September. The plants are compact with lustrous dark green foliage. The name ‘Perpetua’ honors Cape Perpetua along Oregon’s Pacific coast and the cultivar’s appearance of perpetual flowering and fruiting.

‘Perpetua’, tested as ORUS 61-1, was selected in Corvallis, OR, in 2005 from a population grown from open-pollinated seed of PI 296412 (CVAC 45) growing in the USDA-ARS National Clonal Germplasm Repository (NCGR) collection in Corvallis, OR. The parent clone was collected from the wild in 1963 on Mount Pisgah, Monmouth, ME, as Vaccinium corymbosum L. (highbush blueberry) with the collector’s remark about “the dark green foliage and compact” plant habit (USDA-ARS, 2015). The traits of small fruit size and autumn fruiting were notable and unusual for PI 296412, which exhibited these traits every year. The characteristics for fruit size, leaf shape, and leaf size are intermediate between those of V. corymbosum and Vaccinium angustifolium Aiton (lowbush blueberry). Because both species are sympatric on Mount Pisgah, this clone may be their natural hybrid.

The commercial highbush blueberry industry in the Pacific Northwest requested the development of a small-fruited cultivar with higher yields than ‘Rubel’ for the processed fruit market.

Open-pollinated fruit was collected in 2000 from PI 296412 to try to capture the combination of an upright, medium-sized plant with small fruit. This open pollination occurred in the USDA-ARS, NCGR’s one hectare field collection in Corvallis, OR, with a wide diversity of species and genotypes. Because flowering occurred in late July, the most likely male sources of pollen were nearby material with a similar flowering time such as PI 296397, PI 296400, PI 296402, and PI 618067. While self-pollination is a possibility as well, it is uncommon in many V. angustifolium × V. corymbosum hybrids (Rabaey and Luby, 1988). When the population was grown out, a significant number of the seedlings had a propensity for producing a second autumn-ripening crop from flowers that opened in summer. This phenomenon has been reported previously, particularly in V. angustifolium germplasm associated with the University of Minnesota blueberry breeding program (Fear, 1983; Fear et al., 1985; Luby, 1991). As was the case with the early work with primocane fruiting raspberries, this trait was seen as a potential approach to avoiding winter injury in northern Great Plains states (Luby, 1991). ‘Perpetua’ was released due to its outstanding ornamental characteristics combined with repeat flowering.

‘Perpetua’ has been evaluated most extensively at Oregon State University’s North Willamette Research and Extension Center (Aurora, OR) and in USDA-ARS plots in Corvallis, OR, as well as in a test site in Lowell, OR. Plants were lightly pruned during the trial only to remove the least vigorous growth and spent fruiting wood. Plants were fertilized with 90 kg·ha−1 of nitrogen divided into equal portions and applied from bloom to mid-June of each year (Hart et al., 2006). The specifically cited color references are based on the Royal Horticultural Society Color Chart (2007).

Early in the spring, the floral buds break, flower, and set fruit. The small flowers (0.71 × 0.98 cm) are white (White Group 155A) and have a typical urn shape for blueberry. In controlled crosses, flowers set a comparable number of fruit regardless of whether self-pollinated or pollinated with a bulk pollen sample. The fruit ripen fairly early in mid-June in most years. The vegetative buds break soon after flowering and grow for a few weeks before the first black tip stage. The spring foliage is a lush green with a red blush (Fig. 1). Flower buds form on the new growth and instead of going dormant, break bud resulting in a second flowering period that begins in early July (Fig. 2). The chilling requirement, if any, for flower bud initiation is unknown. The second crop ripens from late August through the cooler and shorter days of September and October (Fig. 3). Production of ripe fruit only stops once freezing temperatures begin, as late as 2 Nov. in 2011 at the test sites (Fig. 4). While the glossy deep green foliage is held well into the fall, eventually the leaves turn to a deep, purplish red.

‘Perpetua’s fruit are fairly soft, have a mild flavor, and a wet picking scar making them poorly suited for the commercial fruit market but fine for a home garden market. The fruit are borne in tight clusters of about six berries, and the combination of blue and green fruit with the dark green foliage is particularly attractive in late summer (Fig. 3). The plants have a good balance between fruit production and vegetative growth. While the potential yield of a fully mature plant is unknown, the plants produced ≈1.83 kg/plant 3 years after planting.

‘Perpetua’ is introduced as an attractive ornamental blueberry with repeat flowering and fruiting. ‘Perpetua’ should also be useful for birding enthusiasts interested in having a food source to draw birds to their home in late summer. ‘Perpetua’ should be adapted to typical soil environments where blueberries and other Ericaceous plants can be grown. The ultimate cold hardiness and heat tolerance of ‘Perpetua’ is not known, though based on the Maine origin of the maternal parent it is expected to have good winterhardiness. ‘Perpetua’ should also be useful to breeding programs looking for sources of repeat flowering for low chill environments that are different from the southern highbush blueberry with low chilling trait derived from Vaccinium darrowii Camp (Hancock et al., 2008).

‘Perpetua’ is protected by U.S. Plant Patent 24,209, and an exclusive license for commercial propagation was granted to Fall Creek Farm and Nursery, Inc. (Lowell, OR). This germplasm is available from the USDA-ARS, NCGR where it has been deposited as PI 674714 (CVAC 2189). It is available for research purposes including development of new cultivars. When this germplasm contributes to the development of a new cultivar, hybrid, or germplasm, it is requested that appropriate recognition be given to the source. The USDA-ARS and Oregon State University do not sell plants. 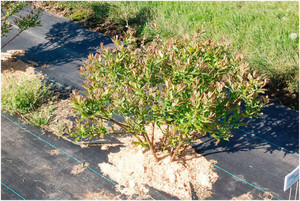 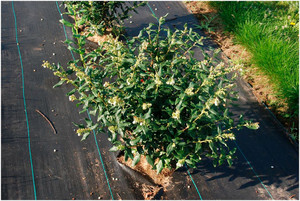 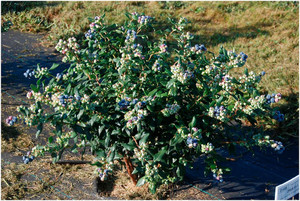 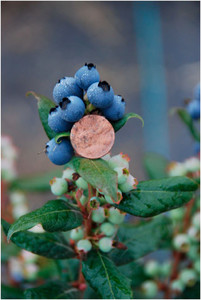 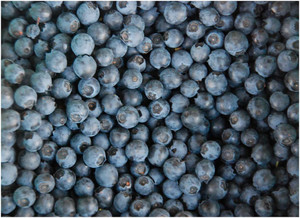