Search for other papers by A. Lane Rayburn in
ASHS
Google Scholar
PubMedClose

The genus Cicer belongs to family Leguminoseae, subfamily Papilionaceae, tribe Cicereae, and is well known for the cultivated taxon, C. arietinum or chickpea. Cicer arietinum is the second most widely grown annual legume crop in the world, and has been mainly cultivated in the Indian subcontinent, West Asia, North Africa, America, and Australia (Singh et al., 2008). Besides the cultivated species, this genus is known to have 43 wild species including 8 annual and 35 perennial species (Singh et al., 2008, 2014; van der Maesen, 1987). The wild Cicer sp. are commonly found in West Asia and North Africa covering Turkey in the north to Ethiopia in the south, and Pakistan in the east to Morocco in the west (Singh et al., 2008). The wild annual species such as Cicer reticulatum, Cicer echinospermum, Cicer pinnatifidum, C. judaicum, Cicer bijugum, and Cicer cuneatum are being used in breeding programs to expand chickpea genetic diversity (Ladizinsky and Adler, 1976; Pundir and Mengesha, 1995; Pundir and van der Maesen, 1983; Singh and Ocampo, 1993; van der Maesen, 1980).

Knowledge of genetic relationships between the cultivated C. arietinum and its wild relatives plays an important role in assessing the origin of C. arietinum and in using its close relatives to facilitate the transfer of agonomically useful traits into cultivated species (Singh et al., 2008). Karyotype studies in these Cicer sp. have been well documented (Galasso et al., 1996; Ladizinsky and Adler, 1976; Ohri and Pal, 1991) and showed that annual and perennial species consistently have the same chromosome number 2n = 16, with base chromosome number of 8 (Ladizinsky and Adler, 1976; Singh and Jauhar, 2005). Also, studies have reported nuclear DNA contents of annual Cicer sp. (Table 1) (Arumuganathan and Earle, 1991; Galasso et al., 1996; Ohri and Pal, 1991; Ruperao et al., 2014). Despite the constant chromosome number, the amount of DNA in the species has been reported to range from 1.53 to 3.57 pg per 2C nucleus (Arumuganathan and Earle, 1991; Galasso et al., 1996; Ohri and Pal, 1991; Ruperao et al., 2014). Although this could be due to intrachromosomal DNA variation, a concomitant chromosome size variation was not observed by the previous study (Ladizinsky and Adler, 1976). This leads to speculation that there may be errors in reporting genome size variation in the genus Cicer. Giving credence to this hypothesis is that two different 2C genome sizes have been reported in C. arietinum. Ohri and Pal (1991) and Galasso et al. (1996) obtained 3.57 and 3.29 pg for 2C genome sizes of C. arietinum, respectively, whereas Arumuganathan and Earle (1991) and Ruperao et al. (2014) reported 1.53 and 1.77 pg, respectively. Given these discrepancies in the literature, it would be prudent to confirm which, if any, of these estimates is more accurate. Such estimates are critical when correlating genome size variation with phenotypic variation. 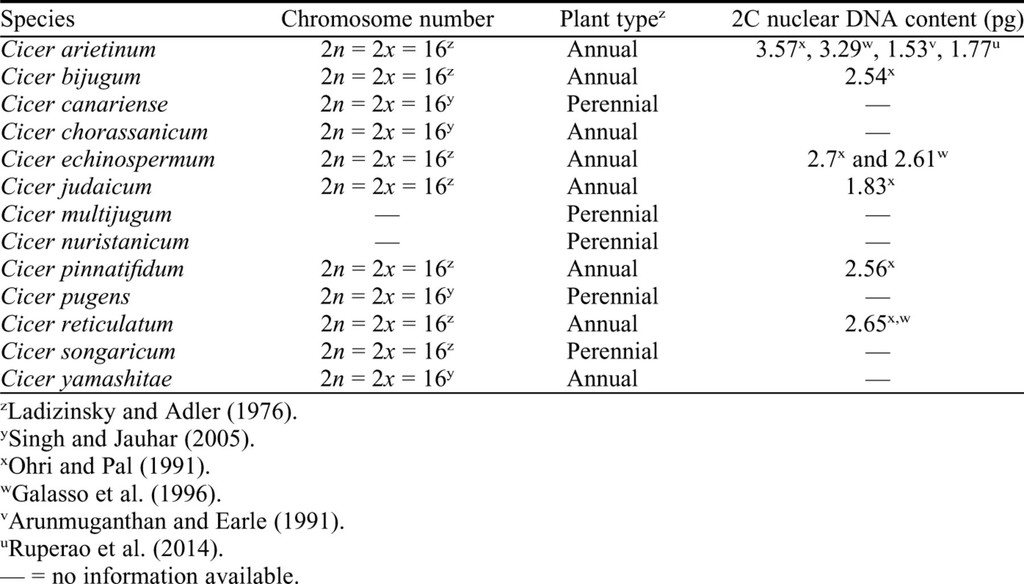 The variation in genome size influences numerous cellular parameters such as chromosome size, nuclear volume, and cellular volume (Bennett, 1987; Grant, 1987), which has been called nucleotype effects (Bennett, 1972). The nucleotype effects can cause variation in phenotypic traits such as seed mass, and many previous studies have investigated the nucleotype effects on seed size and mass (Beaulieu et al., 2007; Bennett, 1987; Benor et al., 2010; Biradar et al., 1994; Chung et al., 1998; Knight and Ackerly, 2002). Most of the previous studies have indicated a positive relationship between genome size and seed mass within species and across species from the same genus and family (Benor et al., 2010; Biradar et al., 1994; Chung et al., 1998; Knight and Ackerly, 2002). However, in some cases, triangular (Bennett, 1987) and quadratic types of relationship between genome size and seed size (Beaulieu et al., 2007) were revealed in 1222 angiosperm species including, Alluium and Vicia, with species with large genomes tending to have large seed mass, whereas species with small genome sizes having either large or small seed mass. However, the correlation between genome size and seed mass may be disrupted by years of selective breeding/artificial selection. According to previous studies (Doebley et al., 2006; Zhao et al., 2015), during the domestication of crops, the nucleotide diversity associated with the selected trait in crops is expected to be lower than that of the wild crops, due to strong selective cultivars over many years of generations. A similar result has been observed in cultivated C. arietinum. Seeds of C. arietinum can be phenotypically classified into two seed types: desi (small angular and dark colored) and kabuli (large owl-shaped cream colored) (Choudhary et al., 2012; van der Maesen, 1972). The desi types are mostly distributed in the Indian subcontinent, whereas the kabuli types are grown in the Mediterranean regions. Despite geographic divergence and phenotype differences, no significant difference in DNA content between the two seed types of C. arietinum were observed by Ohri and Pal (1991). However, until the issues of genome size estimates in C. arietinum are resolved, the reported nonassociation between genome size and seed type can be questioned. It is also important to examine the relationship between genome size and seed mass across wild Cicer sp. for developing an understanding of nucleotype effects with regard to artificial and natural selection in Cicer sp.

In this study, we used flow cytometry to analyze nuclear DNA content of 13 Cicer sp. to provide valuable new genomic information for both genomic analysis and plant breeding strategies for cultivated plant improvement. Seed type and mass of Cicer sp. were investigated, and then the relationship between genome size and seed type/mass was examined within groups of cultivated C. arietinum and wild Cicer sp. 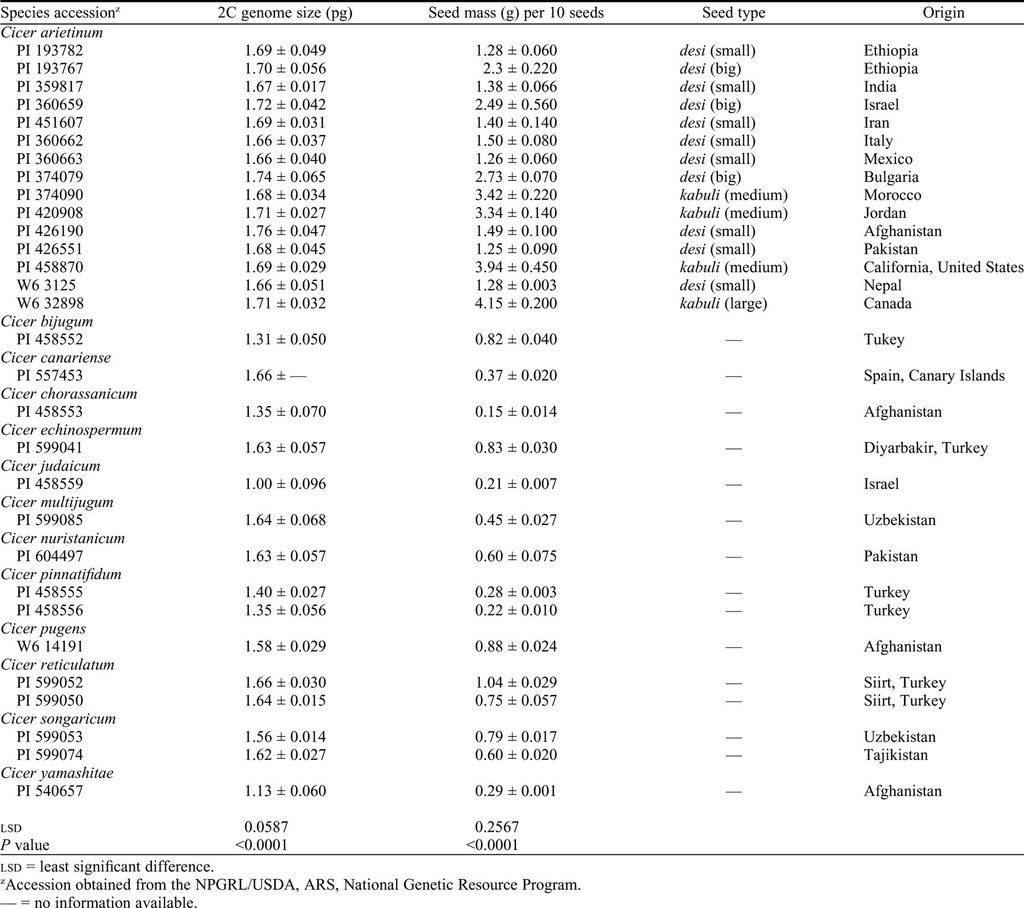 A BD LSR II flow cytometer (BD Biosciences, San Jose, CA) was used to analyze the stained nuclei. The excitation wavelength was set at 488 nm. The emission filter was a 695/40 nm-filter. At least 30,000 nuclei per sample were screened. The nuclei were gated on the basis of fluorescence integral vs. pulse width to exclude the doublets. The total 2C genome size reported in this study is the amount of nuclear DNA in somatic G1 nuclei of each plant.

All statistical analyses were carried out using SAS 9.3 (SAS institute Inc., Cary, NY). General linear model analysis was conducted and Fisher’s protected least significant difference test was run to determine the significant difference (α = 0.05) among all Cicer accessions in 2C genome size and seed mass. The relationship between means of genome size and seed mass plotted on raw-scaled axes (Niklas, 1994), which was carried out separately on accessions of the cultivated species (C. arietinum) and on accessions of wild Cicer sp. Bivariate trait relationships were analyzed by fitting a linear regression trend line using the least squares fit method (Herkimer, 1986). The linear relationship is expressed as Y = α + β X, where Y and X stand for means of variables of seed mass and genome size, respectively, and α and β represent the intercept on the Y axis and the regression coefficient, respectively. F statistics were used for testing the null hypothesis that the regression coefficients are all equal to zero (α = 0.05).

A significant difference in the average of 2C genome size was observed among Cicer sp. ranging from 1.00 (C. judaicum) to 1.76 pg (C. arietinum) (P < 0.0001) (Table 1; Fig. 1). Compared with perennial Cicer sp., a larger range of 2C genome size was observed among the annual Cicer sp. (Tables 1 and 2). Similar results have been observed by Ohri and Pal (1991) who reported a significant difference in 2C genome size among six annual Cicer sp. However, there are some discrepancies between the previous data and ours; in previous 2C genome size estimations (Table 1) (Galasso et al., 1996; Ohri and Pal, 1991), the results obtained were in most cases larger than observed in our study (Table 2). Some noticeable differences in the data on 2C genome size were also observed in C. arietinum, C. bijugum, C. echinospermum, C. judacicum, C. pinnatifidum, and C. reticulatum. In these cases, previous estimations differed from ours by up to 80%. Unlike the previous estimation, done by Ohri and Pal (1991) and Galasso et al. (1996), the 2C genome size of C. arietinum observed by Arumuganathan and Earle (1991) and Ruperao et al. (2014) is similar to our results (Table 2). In addition, the draft whole genome sequence of C. arietinum has been reported to be ≈738 Mb, which converts to a 2C genome size of ≈1.5 pg (Varshney et al., 2013). Given these genome size results, a reassessment of the genome size for wild species was addressed.

The 2C genome size for C. arietinum, C. bijugum, C. echinospermum, C. judacicum, C. pinnatifidum, and C. reticulatum were observed around 1.7, 1.31, 1.63, 1.00, 1.38, and 1.65 pg, respectively (Table 2). In addition, the 2C genome sizes for other seven wild Cicer sp. including five perennial (C. canariense, C. multijugum, C. nuristanicum, C. pugens, and C. songaricum) and two annual species (C. echinospermum and C. yamashitae) were around 1.66, 1.64, 1.63, 1.58, 1.6, 1.63, and 1.13 pg, respectively (Table 2). Both in cultivated and wild Cicer sp., the genome size estimates were in agreement with lower genome sizes of C. arietinum. In addition, the chromosome size data of Ohri and Pal (1991) is more consistent with the genome sizes obtained in this study. Whether this is due to differences in technologies between flow cytometry and Feulgen DNA microdensitometry, internal standard species, technical issues, or other unknown factors could not be addressed. Given the three previous studies agree with the lower genome size of C. arietinum (Arumuganathan and Earle, 1991; Ruperao et al., 2014; Varshney et al., 2013), the association of seed characteristics with genome size was reevaluated.

Seed phenotypes such as size, color, shape, and seedcoating varied within C. arietinum and among Cicer sp. (Fig. 2). Within C. arietinum, the two distinctive seed types, such as desi and kabuli, were distributed widely over geographic regions (Table 2). Two different seed sizes were found in desi types (Fig. 2). The range of seed mass for the bigger size of the desi type was 2.3–2.5 g, whereas the range of seed mass for the smaller size was 1.25–1.5 g/10 seeds (Table 2; Fig. 2). The seed size of the kabuli seed type also varied. According to Moreno and Cubero (1978) and Choudhary et al. (2012), the kabuli seeds used in this study can be classified into medium seeded (range 3.3–3.94 g/10 seeds) and large seeded (4.15 g/10 seeds) (Table 2). Seed phenotypes also varied among the wild species. Seed of wild perennial species are mostly round, triangular; shaped, and darker colored, but various seed sizes were found; higher seed phenotypic variations occurred within wild annual Cicer sp. (Fig. 2). Seed of C. reticulatum, which is well known as the wild progenitor of C. arietinum (Ahmad et al., 1987), has a mix of characteristics of desi (angular seed shape) and kabuli (cream color). Cicer bijugum has dark reddish colored hairy seedcoat, whereas C. echinospermum has a short yellowish colored hairy seedcoat (Fig. 3). Overall, the seed sizes of wild species were smaller than the two seed types of C. arietinum (Table 2), which reflects lower seed weights in wild species (Table 2). 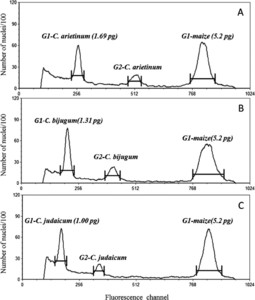 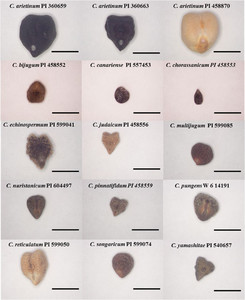 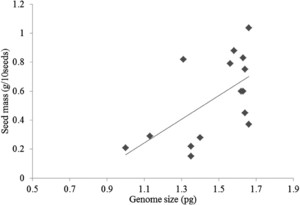