The New Mexico State University Agricultural Experiment Station announces the release of the cultivar NuMex Trick-or-Treat, an open-pollinated, no-heat Capsicum chinense Jacq. In tropical regions, C. chinense is very popular, and in the Caribbean, it is the most common chile pepper species grown. This species contains some of the hottest pod types found in the world (Bosland and Baral, 2007; Bosland et al., 2012). Habanero peppers are increasing in popularity with the general public and the U.S. food processing industry not only for their heat levels but also for their unique aroma and flavor (Rodriguez-Burruezo et al., 2010).

One of the best known pod types/cultigens in C. chinense is the “habanero” named after the city of Havana, Cuba. Habanero types possess an orange lantern-shaped pod, and are grown extensively in the Yucatan of Mexico (Canto-Flick et al., 2008). Today, the largest producer is Mexico’s Yucatan Peninsula (Bosland and Votava, 2012). While Mexico is the largest consumer of this spicy ingredient, its flavor and aroma have become increasingly popular all over the world. Mild or “low-heat” C. chinense cultivars have been released (Crosby et al., 2005; Votava and Bosland, 2004), but none are completely without heat.

Capsaicinoids are the determinants of chile pepper heat/pungency. They are specialized secondary metabolites found only in Capsicum species. In Capsicum, the heat level is both a qualitative and a quantitative trait. The ability for the fruit to be hot or not can be inherited as a single-dominant gene, CS/Pun1 (Capsaicin Synthase/Pungency) located on chromosome 2, which condenses vanillylamine from the phenylpropanoid pathway with 8-methyl 6-nonenoyl-CoA from the branched-chain fatty acid pathway (Ogawa et al., 2015). A second gene for lack of heat in the fruit is caused by the absence of vesicles on the placental tissue, Loss of Vesicles (lov) (Votava and Bosland, 2002). No studies on the inheritance of the lov gene have been done, but appears from anecdotal observations to be a quantitative gene. The lack of heat in the fruit of ‘NuMex Trick-or-Treat’ is associated with the lov gene.

‘NuMex Trick-or-Treat’ originated from the hybridization between ‘Orange Habanero’ (Siegers Seeds, Holland, MI) and a no-heat C. chinense accession (NMCA 30036) from Colombia. The accession, NMCA 30036, matures to a red color and has a lantern-shaped pod reminiscent of the ‘Orange Habanero’. A pedigree breeding method that included a backcross to ‘Orange Habanero’, and four generations of single-plant selection from the BC1F2 generation was accomplished (Fig. 2) in a greenhouse. During each generation, selection for horticultural traits that were similar to the phenotype ‘Orange Habanero’ was accomplished. Also fruit were sampled organoleptic for the absence of heat. Seed from the single-plant selection, NM Breeding Line 05C607-2, was increased under insect-proof cages (Bosland, 1993). The bulk seed increase of 06C1323 became ‘NuMex Trick-or-Treat’ and was used in subsequent field plot trials.

Heat level was determined by an organoleptic test and by a reverse-phase high-performance liquid chromatography (HPLC) system with fluorescence detectors (Collins et al., 1995). Neither discernible heat was detected in ‘NuMex Trick-or-Treat’ by the organoleptic test nor by the HPLC method. The average heat level for the ‘Orange Habanero’ was ≈300,000 SHU on a dry weight basis (Table 1). The flavor and aroma of ‘NuMex Trick-or-Treat’ is equal to, or better than, the ‘Orange Habanero’ (personal observation). 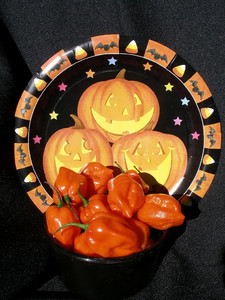