Both ‘Smooth Zest One’ (TX2B300WN) and ‘Smooth Zest Two’ (TX2B261N) [Prunus persica (Batsch) L.] originated in the Stone Fruit Breeding Program, Department of Horticultural Sciences, Texas A&M University, located in College Station, TX. ‘Smooth Zest One’ was selected from a cross between a white fleshed, semifreestone peach, TX3D75W, and the low chill peach ‘TexFirst’ (Byrne and Anderson, 2012). TX3D75W is from a cross between a white peach with unknown parentage and the Florida nectarine ‘Sunraycer’ (Sherman et al., 1995). Seedlings from the cross between TX3D75W and ‘TexFirst’ were planted in a high-density breeding orchard at the Texas A&M University Horticultural Farm in College Station, TX in 2004. In 2005, the selection TX2B300WN (‘Smooth Zest One’) was marked for subsequent observation.

‘Smooth Zest Two’ was selected from a cross between two unreleased nectarine selections: TX1B38N and TX95128N. TX1B38N is an open-pollinated seedling from ‘Sunraycer’ (Sherman et al., 1995) and TX95128N is a nectarine of unknown parentage derived from Florida nectarine germplasm. The seedlings from this cross were planted in a high-density seedling orchard in 2002 and the selection TX1B261N was chosen as having superior fruit size and quality in 2004.

Chilling conditions at the Floresville and College Station, TX and the Fowler, CA evaluation sites.

‘Smooth Zest One’ and ‘Smooth Zest Two’ are being released for use in the low to medium chill zones (200 to 600 chill unit accumulation) where cultivars such as TexFirst (Byrne and Anderson, 2012), Flordaking (Andrews et al., 1979), TexKing (Byrne and Bacon, 2004), and Sunraycer (Sherman et al., 1995) are adapted. ‘Smooth Zest One’ and ‘Smooth Zest Two’ bear crops of clingstone, melting flesh nectarines in early to mid-May in the low to medium chill zones of Texas (Table 2) or mid-May to early June in the higher chill zone of the San Joaquin Valley of California (Table 3). The nectarines are firm, attractive, and large for the season (Tables 2 and 3). Both have fruit that is round to slightly ovate. ‘Smooth Zest One’ has a cream white flesh and ground color whereas ‘Smooth Zest Two’ has a yellow flesh and ground color. ‘Smooth Zest One’ has 70% to 90% light to dark red over color and ‘Smooth Zest Two’ has 40% to 70% light to dark red over color (Fig. 1). The fruit flesh does not brown readily although occasional splitting and cracking have been observed. The quality of these two cultivars is equal to or better than that of the other major cultivars in terms of flesh firmness, fruit size, ground color, appearance, flavor, and soluble solids (Tables 2 and 3).

Fruiting characteristics of Smooth Zest One and Two compared with low and medium chill peach and nectarine cultivars at Floresville, TX (2006–10). Cultivars arranged by ripe date.

Fruiting characteristics of Smooth Zest One and Two compared with low and medium chill peach and nectarine cultivars in Fowler, CA (2005–10). Cultivars arranged by ripe date.

‘Smooth Zest One’, a white fleshed, acid nectarine ripens with or slightly before ‘Flordaking’ and 5 to 6 d before ‘Smooth Delight One’ and ‘Smooth Delight Two’ in the medium chill zone. ‘Smooth Zest Two’, a yellow fleshed, acid nectarine ripens about 4 days after ‘Smooth Zest One’ (Table 2). In the higher chill site, these nectarines ripened 2 to 3 weeks later due to later blooming and longer fruit development periods (Table 3) caused by the cooler Spring temperatures (February–May was about 2 °C lower) in California as compared with Texas.

In the medium chill zones of Texas, the ‘Smooth Zest’ nectarines reach full bloom 4 to 5 d after the low chill peach ‘TexFirst’, about 1 week before nectarines such as ‘Smooth Delight One’, ‘Smooth Delight Two’, ‘Suncoast’ and ‘Sunraycer’, and 12 to 14 d before the medium chill (450 chilling unit requirement) peaches such as ‘Flordaking’ and ‘TexKing’. Thus their chilling requirement is estimated to be ≈200–250 chill units. Flowers of both nectarines have five showy pink petals, yellow anthers with abundant pollen and are self-fertile. The tree of both nectarine cultivars is vigorous with the typical semispreading growth habit of a peach tree as is seen in ‘TexKing’, ‘TexPrince’, and ‘TexRoyal’. No observations have been made on resistance for either peach rust (Tranzschelia discolor) or bacterial leaf spot [Xanthomonas arboricola pv. pruni (E. F. Smith) Dye]. The moderately large leaves are lanceolate with crenulate margins. ‘Smooth Zest One’ has zero to two small reniform petiolar glands and ‘Smooth Zest Two’ has three to four globose petiolar glands per leaf.

Requests for budwood should be directed to The Texas A&M University System’s Office of Technology Commercialization. These cultivars are the subject of plant patent applications. 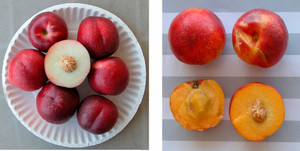