Hippeastrum Herbert, amaryllis, has yielded popular large-flowered hybrids over a 200-year breeding history (Meerow, 2009). Double flower may increase the horticultural value of the plant and have significant market appeal. Significant breeding for double-flowered amaryllis was first reported by McCann (1937). Additional tepal-like structures in double-flowered amaryllis apparently result from transformations of both male and female reproductive structures (Bell, 1977). Double-flowered amaryllis may not have any functional reproductive parts or may produce some pollen-containing anthers at the ends of some of transformed, petal-like stamens, while the ovary is extremely reduced with little or no stigmatic tissue (Meerow, 2000).

The majority of amaryllis species/cultivars do not have fragrant flowers (Meerow, 2000). Although no genetic analysis has been preformed, Meerow (2009) have drawn two hypotheses: (1) Floral fragrance is a recessive trait and (2) expression of fragrance is perhaps under only a single gene control.

Amaryllis is used extensively in landscaping and for cut flowers in tropical and subtropical areas. Growers have been seeking tall, double-flowered, and fragrant cultivars, which are popular for plantscaping and flower arrangements in a variety of creative ways. The development and characteristics of a new double-flowered cultivar, T.S.S. No.1-Pink Pearl, is described below.

The amaryllis breeding project at the Taiwan Seed Improvement and Propagation Station (T.S.S.) has been ongoing since 2001. Double-flowered ‘Blossom Peacock’ was selected as the pollen parent as this cultivar has three types of pollen-containing anthers (Fig. 1A–C). Pollen germination was determined both in vitro and in vivo. Solid B&K medium (Brewbaker and Kwack, 1963) containing 10% sucrose was used for inoculation. Pollen from these respective anthers was inoculated onto the medium surface. Pollen germination rates were determined under a microscope after 1 h of incubation at 28 °C. Pollen grains were considered to have germinated when pollen tubes were equal or greater in length to the pollen diameter. We observed 100 pollen from each anther type, each with three replications. Results indicated that pollen germinated when cultured in vitro (Fig. 1D–F), and the germination rate (64%–67%) did not differ among pollen sources from various anther types.

For in vivo pollen germination, we placed the pollen from these three anther types of ‘Blossom Peacock’ onto the stigma of a single-flowered ‘Design’ in a greenhouse at average temperature of 22 ± 3 °C and an average noontime light intensity of 1300 μmol·m–2·s–1 photosynthetic photon flux (PPF). Fruit set and number of seeds per fruit were counted after pollination for 30 d. Seeds were sown on 4 sphagnum peat : 1 perlite (by volume) medium in the greenhouse and germination rate was recorded after sowing for 30 d. There were three replicated flowers pollinated with pollen from each anther type. Results showed that pollen source did not alter fruit set (Fig. 1H–I), number of hybrid seeds per fruit, and seed germination rate (Table 1). Pollen of petal-like stamens in doubled-flowered amaryllis germinated as shown previously by Meerow (2000) and documented in this study. In addition, we show that pollen of the defective anther in ‘Blossom Peacock’ can also be used for successive breeding efforts (Fig. 1; Table 1).

Single-flowered ‘San Remo’ was selected as the mother parent as it has showy white and pastel-colored flowers, which may be linked with fragrance (Meerow, 2009). Since progeny of two fragrant parents are usually fragrant (Meerow, 2000), we selected both the parent cultivars San Remo and Blossom Peacock because they have fragrant flowers. We obtained 22 progenies after crossing and planted the seedlings in a natural plastic greenhouse with maximum noontime 1400 μmol·m–2·s–1 PPF at average daily temperature of 22 °C. When the progenies flowered, four double-flowered plants were obtained. After evaluation of growth and flowering performance, only ‘T.S.S. No.1-Pink Pearl’ was selected and named (Fig. 2).

Plants of ‘T.S.S. No.1-Pink Pearl’ and its male parent, the commercial cultivar Blossom Peacock, were propagated by twin-scale as described by Read (2004) and raised for comparable study at T.S.S. Thirty bulbs of 25–30 cm in circumference for both cultivars were planted in soil beds in a plastic house at 17–28 °C under 10.5–12.5 h daylengths. Flower characteristics were measured at anthesis. Flower diameter for both cultivars was 15–17 cm. ‘T.S.S. No.1-Pink Pearl’ had longer scapes and more tepals than ‘Blossom Peacock’ (Table 2). Dissection of floral parts revealed that both double-flowered cultivars have two whorls of floral organs and the first whorl of stamen and pistil are all converted into tepals. The second whorl of anther and pistil were present in ‘Blossom Peacock’ but were transformed to petaloid stamens and stylar tepal, respectively, in ‘T.S.S. No.1-Pink Pearl’ (Fig. 3).

Taiwan Plant Breeder’s Right has been granted by the Council of Agriculture, Executive Yuan, Taiwan. A limited quantity of bulbs may be available for research purposes only by sending a request to the first author (tzong@tss.gov.tw). 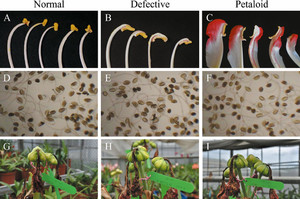 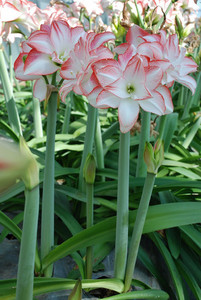 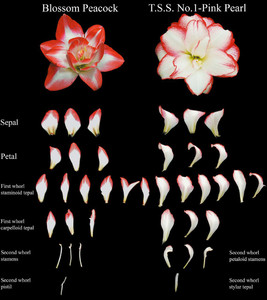 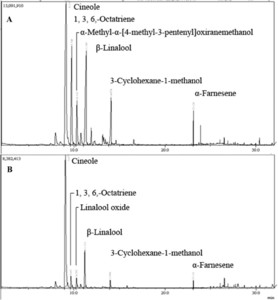