Search for other papers by Timothy K. Broschat in
ASHS
Google Scholar
PubMedClose

Potassium (K) deficiency is a widespread problem in palms growing in sandy or calcareous soils in southeastern United States. Its symptoms are highly conspicuous, reduce palm aesthetic appeal, are difficult to correct, and can be exacerbated by nitrogen (N) fertilization. The objective of this study was to determine the optimum fertilization rates and ratio for N and K in areca palm [Dypsis lutescens (H. Wendl.) Beentje & J. Dransf. and Mexican fan palm (Washingtonia robusta H. Wendl.) growing in a calcareous sandy fill soil. Both species had their highest quality when fertilized with 12.2 g·m−2 N and 12.2 g·m−2 K from controlled-release (2–3 month release) sources every 3 months. Actual N and K application rates were better predictors of palm quality than N:K ratio at the highest fertilization rates that would be recommended for field nursery production. However, at lower application rates more typical of those used for landscape palm maintenance, palm quality improved as the N:K application ratio was decreased.

Potassium (K) deficiency is a widespread problem in palms growing in sandy or calcareous soils in southeastern United States. Its symptoms are highly conspicuous, reduce palm aesthetic appeal, are difficult to correct, and can be exacerbated by nitrogen (N) fertilization. The objective of this study was to determine the optimum fertilization rates and ratio for N and K in areca palm [Dypsis lutescens (H. Wendl.) Beentje & J. Dransf. and Mexican fan palm (Washingtonia robusta H. Wendl.) growing in a calcareous sandy fill soil. Both species had their highest quality when fertilized with 12.2 g·m−2 N and 12.2 g·m−2 K from controlled-release (2–3 month release) sources every 3 months. Actual N and K application rates were better predictors of palm quality than N:K ratio at the highest fertilization rates that would be recommended for field nursery production. However, at lower application rates more typical of those used for landscape palm maintenance, palm quality improved as the N:K application ratio was decreased.

Fertilization requirements for palms growing in mineral soils differ greatly from those growing in largely organic container substrates (Broschat, 2009). Pine bark is a common component of container substrates in southeastern United States, but requires high N fertilization rates to compensate for N tie-up by microbes degrading this material (Ogden et al., 1987). Thus, fertilizers used in container production of palms and other ornamental plants contain large amounts of N relative to phosphorus (P), potassium (K), and other elements (Broschat, 2009; Poole and Conover, 1985). On the other hand, the highly leached, low cation-exchange capacity, sandy soils that predominate in the coastal plain of southeastern United States are typically deficient in N, K, magnesium (Mg), and often micronutrients such as iron (Fe), manganese (Mn), and boron (B) (Tisdale and Nelson, 1975). However, there is no published research on the optimum N and K fertilization rates and ratios for ornamental palms growing in landscape soils.

Potassium deficiency, which causes foliar discoloration, leaflet necrosis, and premature senescence of the oldest leaves, is nearly ubiquitous on palms growing in these soils and has been shown to be exacerbated by high N fertilizers (Broschat, 1990, 2009; Mills and Jones, 1996). While N deficiency symptoms are rarely observed on palms growing in these soils, growth rate is strongly affected by N fertilization rates. Thus, in field nurseries, where both visual quality and rapid growth are important, N and K fertilization rates must be properly balanced. It is not known if absolute amounts of N and K are critical for optimum growth and quality of field-grown palms or whether the ratio of these two elements is more important.

Since K deficiency was first identified as a serious problem in landscape and field-grown palms in southeastern United States in the late 1980s (Broschat, 1990), sequential trials with fertilizers containing increasingly lower N:K ratios and higher proportions of controlled-release K culminated in the recommendation of products having an analysis of 8N–0.9P–10K–4Mg plus 2% of Mn and Fe and trace amounts of zinc (Zn), copper (Cu), and B (Broschat, 2009).

Because of the severity of K deficiency on these soils, the need to reduce leaching losses, and the need to balance the ratios of N, K, and Mg over time, Broschat (2009) recommended that 100% of the N, K, and Mg should be in controlled-release form. Although a landscape maintenance application rate for this 8N–0.9P–10K–4Mg formulation of 73 g·m−2 of canopy or landscape area every 3 months has been recommended (Broschat, 2014), there is no research showing what the optimum fertilization rates are for either landscape maintenance or field production of palms. Commercial field production application rates of this product are typically twice the recommended landscape maintenance rates (Broschat, 2009). The purpose of this study was to determine the optimum N and K fertilization rates and ratios for field-grown areca and Mexican fan palms in southeastern Florida.

Eighty-one plots (blocks) each containing three palms of both species spaced 3 m apart in rows, were separated from each other by an additional 3 m space to prevent roots from entering adjacent plots. Twenty-seven treatments were applied to three replicate plots in a randomized complete block design with individual palms (n = 9) as the experimental units. Palms were irrigated every other day for the first 6 months and every 3 d thereafter with 2 cm of water per application using overhead rotary irrigation heads mounted on 2-m tall risers. All palms received 18 g of Osmocote 19N–2.6P–10K plus micronutrients (8–9 month release at 20 °C; Everris, Marysville, OH) at planting and 3 months later to aid in establishment. Experimental fertilizer treatments were applied on 22 Oct. 2009 and every 3 months thereafter as shown in Table 1. All palms except those in treatment 26 (control receiving no fertilizer) also received 7.3 g of P from triple superphosphate (Helena Chemical Co., Fort Pierce, FL), 0.11 g of Fe from Trachelene Fe (=FeEDTA + FeDTPA) (QC Corp., Baltimore, MD), 1.47 g of Mn from manganese sulfate (Industrias Sulfamex, Pánuco, Mexico), 0.11 g of B from Granubor (US Borax, Valencia, CA), 0.04 g of Cu from CuSO4 (Fisher Scientific, Fair Lawn, NJ), and 0.04 g of Zn from ZnSO4 (Fisher Scientific) at each fertilization to prevent these elements from limiting growth or quality. All fertilizers were applied by broadcasting the materials uniformly over a 1 m2 area surrounding each palm. Magnesium was applied as kieserite (Kali and Salz, Kassel, Germany) at a rate equal to 40% of the K application rate to prevent K:Mg imbalances (Broschat, 2009; von Uexkull and Fairhurst, 1991). 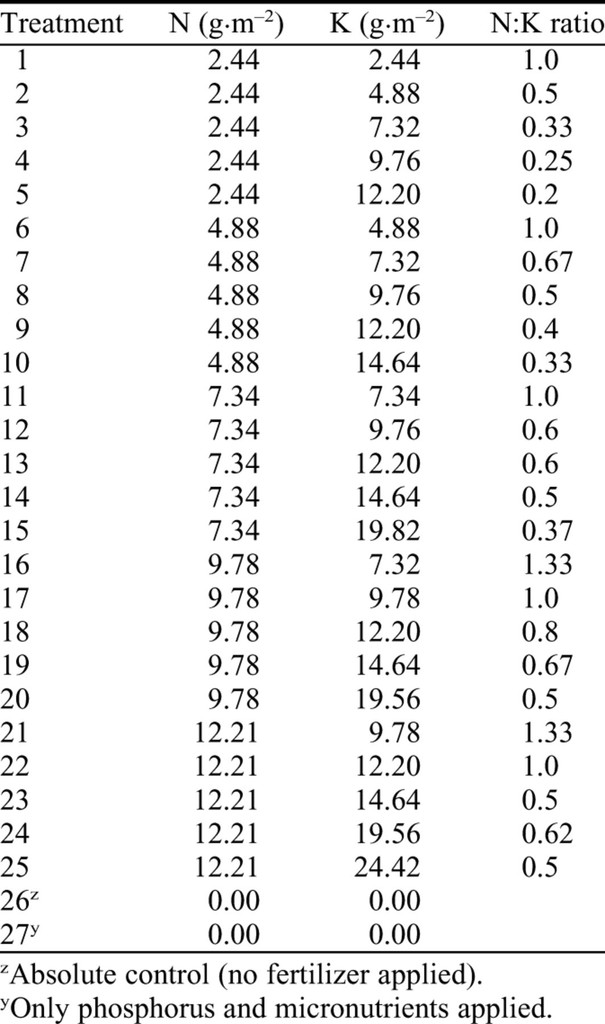 The Bahiagrass (Paspalum notatum Flügge.) growing between the plots was mowed at a height of 10 cm as needed while weeds growing within 60 cm of each palm were controlled by spraying with glyphosate. Plants were measured for total height, the number of leaves and stems (areca palms only) were counted, and each plant was rated for severity of N, K, and Mg deficiencies (30 Nov. 2012). Deficiency severity ratings were based on a 0–5 scale with 0 = dead from a nutrient deficiency, 1 = severely deficient, 3 = moderately deficient, and 5 = no deficiency symptoms present. Leaf samples consisting of the central leaflets of the youngest fully expanded leaf on each palm were also collected at that time. Samples from the three palms of each species in each plot were pooled for analysis yielding three composite samples per treatment and species. Leaf samples were dried at 60 °C, ground to pass a 40 mesh screen in a Wiley Mill (Thomas Scientific, Swedesboro, NJ), digested in H2SO4–H2O2 using the Hach–Kjeldahl method (Hach et al., 1987), and analyzed for total N and P using an autoanalyzer (Seal Analytical, Mequon, WI) and total K and Mg using atomic absorption spectroscopy (Perkin-Elmer, Waltham, MA).

The PC1 represented 56% of the total variation in the original six variables for areca palm and 55% for Mexican fan palms (Table 2). All of the original quality variables had relatively high positive correlations with the first principal axis (eigenvector). Thus, PC1 represents an overall quality index and its scores can be used as a single composite measure of overall plant quality. 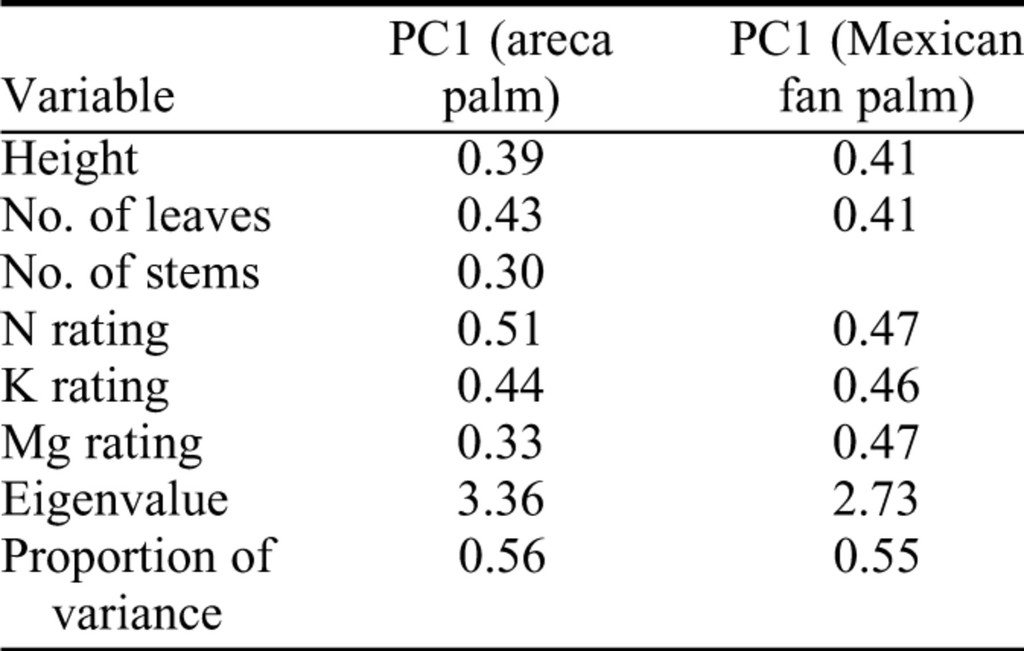 Although soil type visibly varied among the various plots, plot (block) effects on PC1 scores were not statistically significant. ANOVA and mean separation of the treatment PC1 scores showed that treatment 22 resulted in the highest quality palms for both species, although treatments 20 and 25 had statistically equivalent quality for areca palm and treatments 19 and 25 were equally good for Mexican fan palm (Table 3). All of these treatments had high rates of N with N:K ratios generally between 0.5 and 1. Equivalent high quality could be achieved by using slightly lower N rates, but higher K rates in both species (Figs. 1 and 2). The fact that treatments 23 and 24 performed significantly poorer than treatments having similar N rates and higher or lower K rates may be due to chance assignment of one or more of those treatment plots to areas in the field having poorer soil. 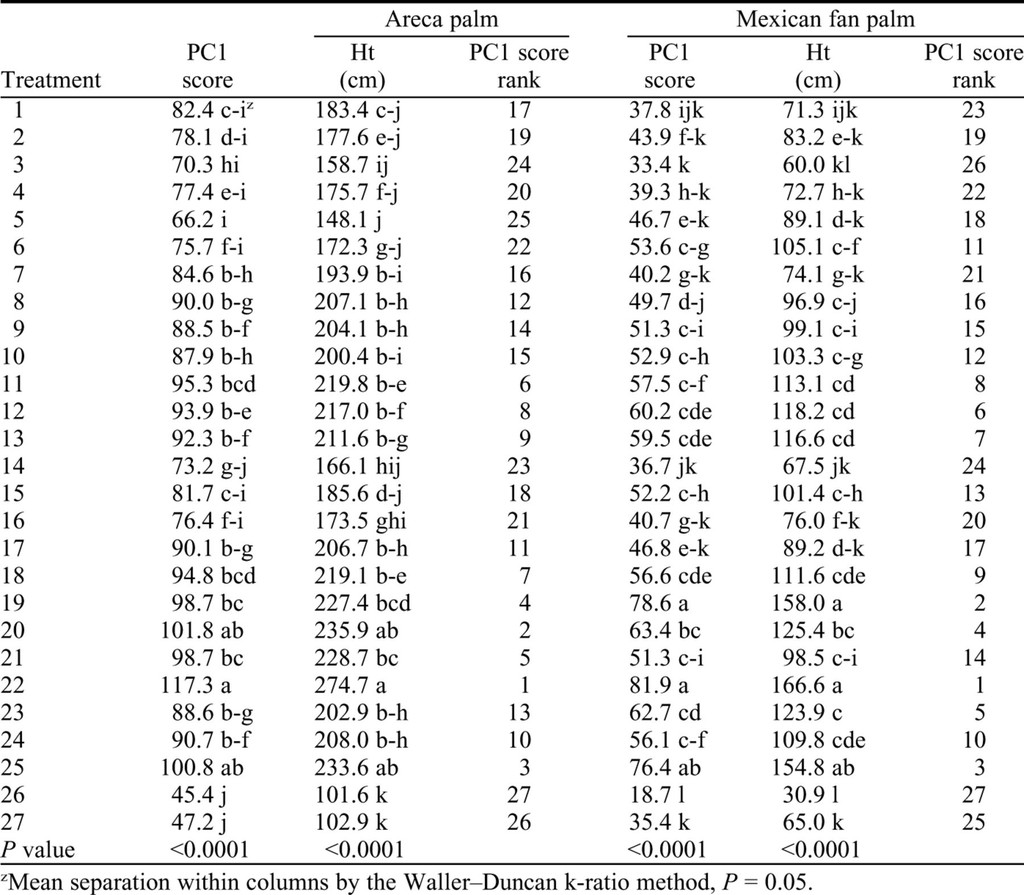 The difference in quality in Mexican fan palms, but not in areca palms between treatment 26, which received no fertilizer, and treatment 27, which received only P plus micronutrients suggests that growth and quality in these Mexican fan palms was limited by P deficiency as no micronutrient deficiency symptoms were observed in this species. Unfertilized palms (treatments 26 and 27) of both species were extremely stunted or dead after 3 years, whereas few of the fertilized palms died during that time. Phosphorus deficiency is rare in palms in the United States, but can be locally severe, especially on reclaimed Everglades soils such as those found in this study area (Broschat and Elliott, 2009). While P fertilization was essential for Mexican fan palms, areca palms did not respond to supplemental P in this study or in another on a nearby plot (Broschat, 2015).

Although rapid growth is a primary concern for nursery production of palms, plant height was highly correlated with overall plant quality (PC1 scores) (Table 2) and rankings of the treatment means for PC1 scores and plant height were virtually identical for both species (Table 3). Thus, the largest plants also tended to have the highest nutrient deficiency ratings (fewest visual symptoms) and the greatest number of leaves. 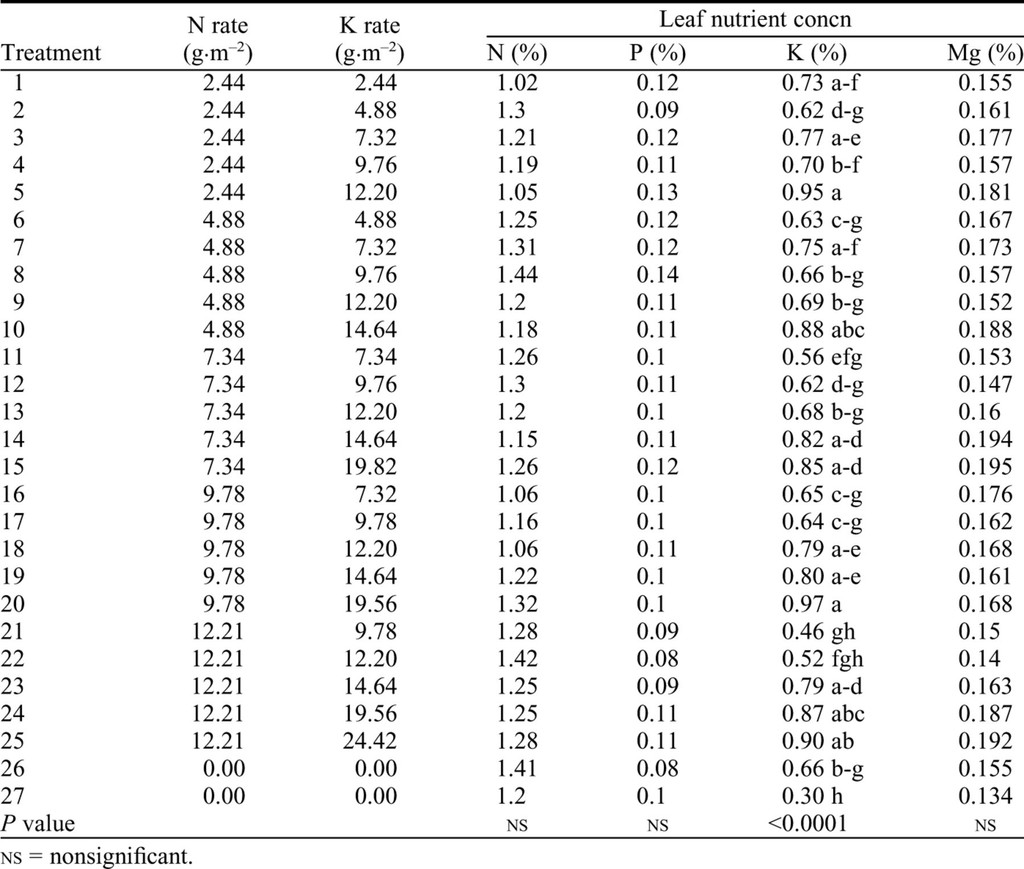 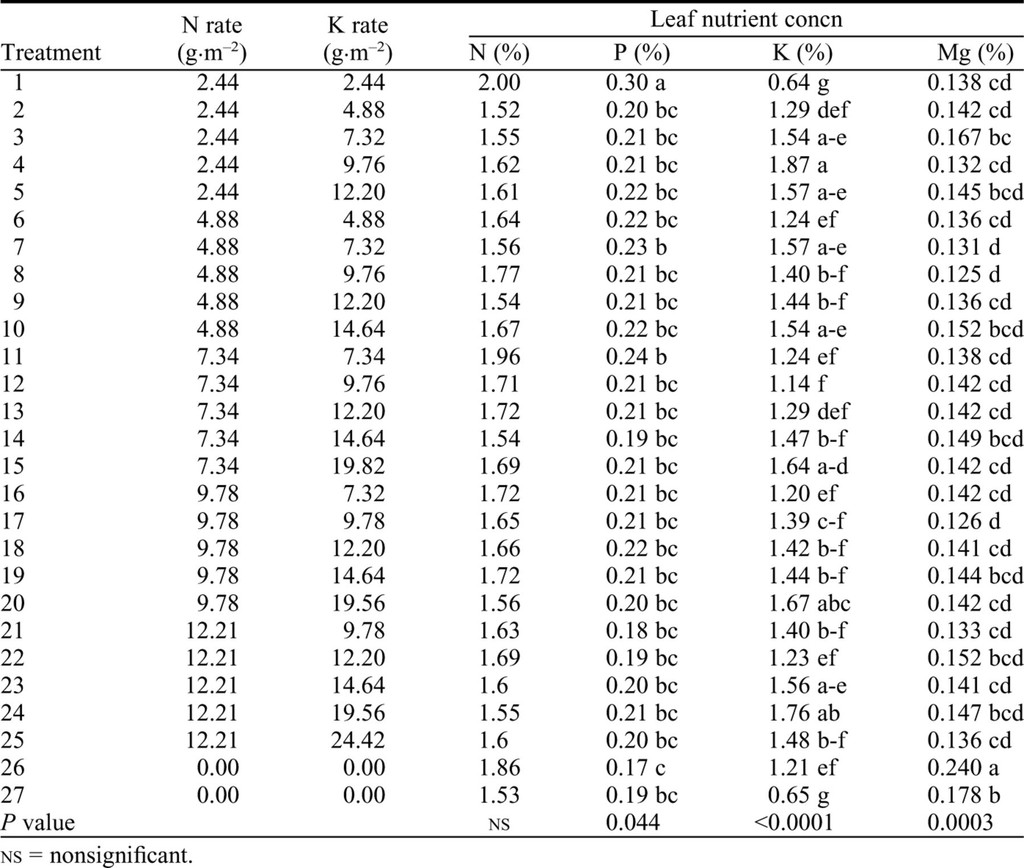 In general, optimum growth and quality were obtained when using high rates of both N and K for areca and Mexican fan palms. The optimum application rates for N and K determined in this study (12.2 g·m−2 of N and K every 3 months) is about twice the rate recommended for palm maintenance in Florida landscapes, but equal to that suggested for field nursery production of palms where growth rate is also important (Broschat, 2014). Actual N and K application rates were found to be better predictors of palm quality than N:K ratio at these high-fertilization rates typically used for field nursery production. However, at slightly lower application rates (9.78 g N/m2), more typical of those used for landscape palm maintenance, palm quality of both species generally improved as the N:K application ratio was decreased (Tables 1 and 3). Optimum treatments had N:K ratios ranging between 0.5 and 1.0. This research supports current University of Florida recommendations for landscape palm fertilizers specify an N:K ratio of 0.8 (Broschat, 2014).

This study was done on a calcareous sandy fill soil that is typical for landscapes in coastal cities in Florida and other southeastern states in the United States. Further research will be needed to determine optimum N and K fertilization rates for other soil types where palms are grown. This study was done using controlled-release sources for N and K, and it is not known whether similar results would have been obtained using more water-soluble sources. 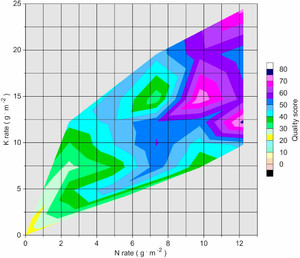 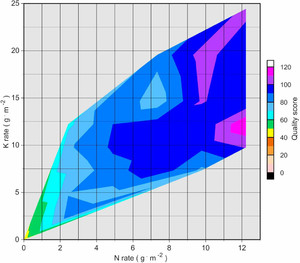