Percent of participants indicating their barriers to purchase for indoor foliage plants (n = 91). Note: Participants were asked to “check all that apply” therefore the percentages do not sum to 100%. Maintenance included fertilization and irrigation requirements. Participants indicated other attributes including “I do not think about the barriers,” “they do not benefit wildlife,” mold and odor issues, “air conditioning kills them,” and traveling too often to care for the plants. 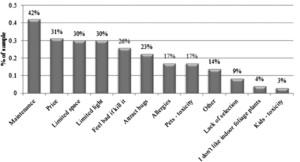