Begonia ×semperflorens-cultiform Hort (Begonia semperflorens Link & Otto) is the most widely cultivated begonia (Chen and Mii, 2012) and the fourth most popular bedding plant in the United States with a total production valued at $36 million in 2009 (U.S. Department of Agriculture, 2010). Helen Kraus coined and defined the name Semperflorens-cultiform group in 1945 as a synonym (“ever flowering”) of B. cucullata var. cucullata, the first variant of the species introduced to commerce (Krauss, 1947). Semperflorens-cultiform group, marketed as wax begonias, is derived from at least five species including B. cucullata Willdenow, B. schmidtiana Regel, B. roezlii Regel, B. foliosa Kunth, and B. gracilis Kunth (Tebbitt, 2005). The wide use of the Semperflorens-cultiform group is the result of several factors including continuous bloom, compact growth habit, uniform plant growth, and disease resistance (Chen and Mii, 2012; Tian et al., 2012; Tiddleton et al., 1942). Therefore, the goal of the breeding program at USDA-ARS in Poplarville, MS, was to build on these already existing desired horticultural attributes and further improve the environmental tolerances of germplasm by introgression of useful traits from progenitor species to increase production adaption to the heat and humidity prevalent in the Gulf States region. As a result, two new wax-type begonia clones, FB08-59 and FB08-163, were recently released by the Agricultural Research Service of the U.S. Department of Agriculture. Both clones have improved environmental tolerances that increase production adaption when exposed to elevated periods of heat and humidity. Both FB08-59 and FB08-163 have survived and thrived for over 5 years under a variety of environmental stresses such as overhead summer irrigation and overwintering in #3 (25 × 23 cm) cylindrical plastic containers under ambient Plant Hardiness Zone 8 climatic conditions (U.S. Department of Agriculture, 2013). Commercial varieties commonly planted in the South such as Vodka, Whisky, Gin, Senator, Inferno Red, Badda Bing Red, and Badda Boom Scarlet used for comparison growing under the same summer conditions as FB08-59 and FB08-163 were generally killed by a combination of heat stress and Pythium before fall of each summer. The environmental tolerances of FB08-59 and FB08-163 will prove useful as parents for begonia breeders interested in developing bronze-leafed environmentally tolerant cultivars adapted to long hot, humid summers. Both clones are also adapted to overwintering in climates where the soil does not freeze in winter, which adds another dimension to environmental tolerance that may be used to develop improved clones. FB08-59 and FB08-163 regenerate after overwintering from root buds characteristic of wild-type B. cucullata (Fig. 1A) and ‘Kaylen’ (Fig. 1B). Such structures are generally absent in annual wax begonia varieties (Fig. 1C). The dominant nature of many genes associated with the environmental tolerance traits identified in FB08-59 and FB08-163 make them ideal parents for development of inbred lines with high levels of environmental stress tolerance to serve as parents for F1 hybrid seed production.

FB08-59, an ebony-foliage, red-flowered wax begonia, is the product of a recurrent selection breeding procedure to combine and improve the environmental tolerances identified in B. ×semperflorens ‘Kaylen’ and B. cucullata var. arenosicola into a bronze-leaved type, perennial, wax begonia. FB08-59 was selected from a F2 (B. semperflorens ‘Kaylen’ × B. cucullata arenosicola) population grown in 2008 and has survived and thrived for 5 years under ambient conditions typical of the lower South.

FB08-163 also has excellent adaption to the heat and humidity prevalent to the region. The clone was selected as an elite seedling from plants that resulted from a cross between B. semperflorens ‘Kaylen’ and B. schmidtiana ‘Shanzi’.

Plants of FB08-59 (Fig. 2A) have a rounded, intermediate growth habit with a typical plant growing under optimum conditions measuring 40 cm wide and 30 cm tall in the summer. Leaves are moderately large (7 × 7 cm) and are colored an attractive grayed purple (purple N77A) (Royal Horticultural Society, 2001) with pronounced green veins (grayed green 193A). Undersides of leaves are purple N177C. Flowers are typical of B. semperflorens and measure 2 cm in diameter. The two larger petals on male flowers are 15 × 12 mm, whereas the larger two female petals are 9 × 10 mm. All flowers are red–purple N66B with splotched white N155C pigmentation often present in the central portion of petals. Stamens are a prominent yellow 7A, which provides a nice contrast with flowers and foliage. Stems are purple N79B. Flowering of this clone is not as prolific as most commercial varieties.

Plants of FB08-163 (Fig. 2B) have a rounded, spreading growth habit with a typical plant, growing under optimum conditions, measuring 50 cm in diameter and 50 cm tall in the summer. Glossy burgundy (grayed purple N186B) leaves are sparsely covered with small 1-mm hairs on upper and lower surfaces. Asymmetrical, ovate leaves are moderately large (9 × 8 cm) with cordate bases and 2-cm petioles. Undersides of leaves have a burgundy blush (purple N78B) with a pronounced light green (green 138D) palmate pattern of veins. Flowers are typical of B. semperflorens with male flowers 2 cm in diameter and smaller female flowers, which are 1 cm in diameter with three winged 1-cm seed pods. Central portions of the flowers are colored white N155D with red–purple 65A edges that bleed into the central color region. Inflorescences contain six flowers in a balance ratio of sexes. Stamens and pistils are a prominent yellow 7A, which provides a nice contrast with petals and foliage. Pollen is sterile but viable seed can be set by using fertile pollen from other B. semperflorens selections. Stems are grayed purple 183D and pubescent.

Isolated plants of FB08-163 failed to set seed pods, indicating pollen of the clone might not be viable. Additionally, pollen was collected from field-grown plants of FB08-163 and seven other begonia genotypes (Table 1). An in vitro pollen germination test was performed by choosing 10 random plants of each genotype to evaluate pollen germination using the “hanging drop” technique as described by Sakhanokho and Rajasekaran (2010). The liquid germination medium used consisted of 1.2 M sucrose, 0.42 g·L−1 calcium nitrate [Ca(NO3)2], 0.20 g·L−1 boric acid (H3BO3), 0.1 g·L−1 potassium nitrate (KNO3), 0.22 g·L−1 magnesium sulfate (MgSO4·7H2O), and 15% (w/v) polyethylene glycol. Pollen germination was determined by prepping three flowers per plant and evaluating three slide locations per flower. Total number of pollen grains within a field of view was counted and then the percentage of germinated pollens was determined. A germinated pollen grain was defined as any pollen grain with a pollen tube at least as long as the diameter of the pollen. Germination rate ranged from 0% in FB08-163 to 91.51% (Begonia ‘Emperor Rose’) (Table 1), suggesting male sterility in FB08-163. These results were later confirmed in crosses where FB08-163 was used as the male parent.

Begonia pollen germination as assessed by in vitro pollen test. 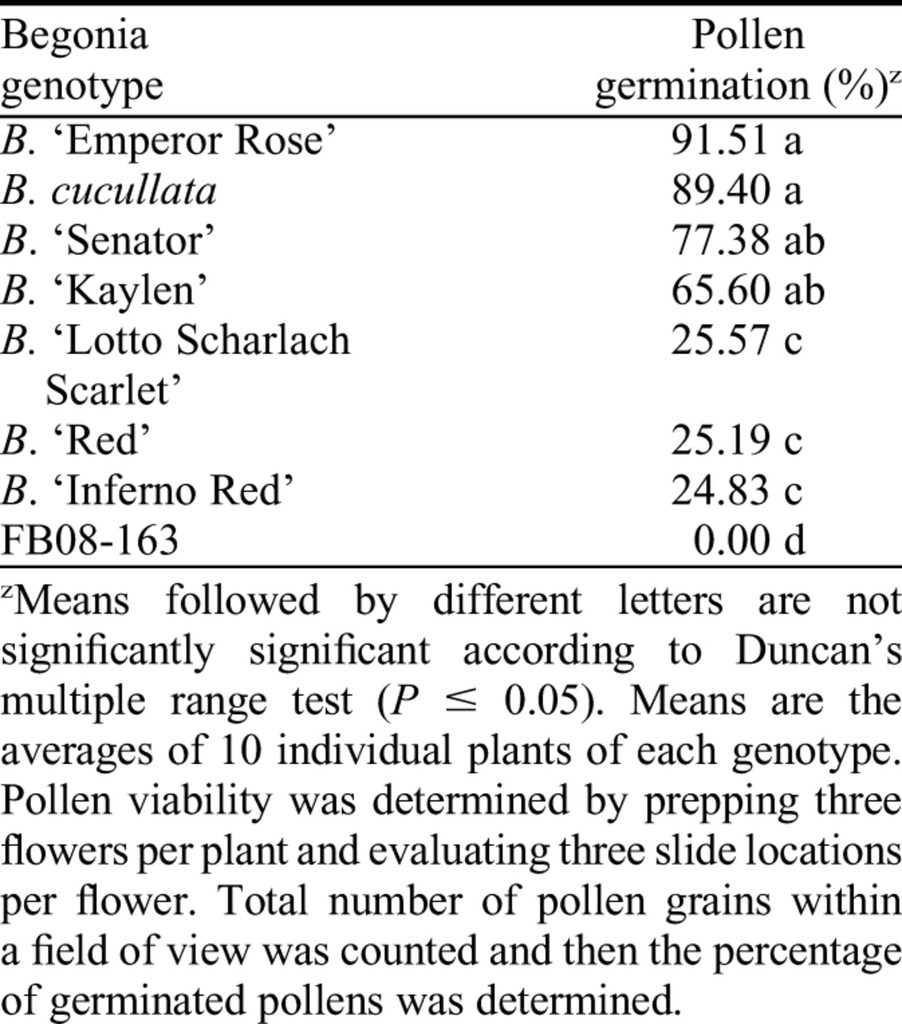 Additional information on FB08-59 and FB08-163 is available on written request to Cecil Pounders, USDA-ARS (Cecil.Pounders@ars.usda.gov). Limited amounts of plant materials of FB08-59 and FB08-163 are available from the senior author for distribution to all interested research personnel. It is requested that appropriate recognition be made if this germplasm contributes to the development of other new cultivars. In addition, specimens of the releases have been deposited in the National Plant Germplasm System where they will be available for research purposes. The USDA-ARS does not have plants for sale.