Corky root is one of the major lettuce (Lactuca sativa L.) diseases in the world, including North America, Western Europe, Australia, and New Zealand. Roots of infected plants develop yellow to brown lesions that later can become longitudinal corky ridges, restricting the absorption of water and nutrients from soil. Yield losses from reduced head size can reach 30% to 70% in severely infested fields in California and Florida (van Bruggen, 1997). The most commonly isolated pathogen from diseased roots is the bacterium Sphingomonas suberifaciens (Yabuuchi et al., 1999), formerly Rhizomonas suberifaciens, although several other bacterial species have also been isolated (van Bruggen, 1997). The incidence of corky root can be reduced by soil fumigation (O’Brien and van Bruggen, 1990) or by using lettuce transplants instead of the common practice of direct seeding (van Bruggen and Rubatzky, 1992). However, these practices may not be economically feasible for the Salinas Valley of California, the major lettuce production area in the United States (Patterson et al., 1986). The use of cultivars resistant to S. suberifaciens has been an important management strategy for corky root. The resistance to corky root is controlled by a recessive allele (cor) at a single locus (Brown and Michelmore, 1988), which has been deployed in most resistant lettuce cultivars.

Although corky root resistance has been transferred into many crisphead lettuce cultivars, there are few leaf lettuce cultivars with the resistance, especially among the publicly released ones. With the increasing popularity and production of leaf lettuce, there is a need for public germplasm that facilitates the research and development of new cultivars and germplasm. We released two green leaf lettuce breeding lines resistant to corky root recently (Mou, 2011). In this article, we describe a red leaf lettuce breeding line with resistance to corky root and adaptation to the major lettuce production areas in the central coast of California.

The breeding line was derived from a cross between the red leaf cultivar Merlot and crisphead cultivar Glacier that has cor alleles (Ryder and Waycott, 1994). Progeny plants were grown in a field with a history of corky root disease at the USDA Agricultural Research Station in Salinas, CA, and were selected for resistance to corky root and horticultural traits. Single plant selections were made by using the pedigree breeding method from F2 to F6 generations. 06-810 is a F7 breeding line.

The breeding line has bright red color and the density of the red pigment gradually decreases toward the leaf base (Fig. 1). The intensity of the red color of 06-810 is similar to the cultivar Lolla Rossa (Table 1). Leaf margins are largely entire with occasional indent and mildly undulating. Leaf surface is crinkled or blistered. Leaf width and length are approximately equal, but the leaf becomes narrower toward the base. Ribs are pointed and become more prominent toward the base. Bases of outer and interior leaves overlap well. Texture is relatively soft and flexible. Seeds are white.

Means of corky root and downy mildew disease ratings for a leaf lettuce breeding line 06-810 and cultivars grown in trials from 2007 to 2011 at Spence Farm, Salinas, CA.

The breeding line, along with nine commercial leaf lettuce cultivars, were planted in five trials at the Spence Farm of the Agricultural Research Service of the USDA, Salinas, CA, on the following planting dates: 19 June 2007, 10 June 2008, 9 June 2009, 16 June 2010, and 1 June 2011. The trials were planted in summer because the corky root disease is more severe under warmer weather. Cultivar Glacier was included in all trials as a resistant control. The experimental design was a randomized complete block with four replications. Each plot was 14 m long at the commercial spacing of 30 cm between plants and 35 cm between rows on a 1-m-wide double-row bed. Standard production practices were followed in these trials. At harvest maturity, the roots of three randomly selected plants from each plot were rated using Brown and Michelmore’s (1988) scale of 0 to 9 (0 = no disease symptom; 9 = plant died from the disease). Generally, the corky root ratings of the breeding line were not significantly different from the resistant control ‘Glacier’ but were significantly lower than nine susceptible leaf lettuce cultivars in the trials (Table 1). Plants were also rated in the field for resistance to downy mildew (Bremia lactucae Regel) using Grube and Ochoa’s (2005) scale of 0 to 5 (0 = no lesions; 5 = large lesions covering nearly 100% of the exposed leaf surface) from 2008 to 2011. Downy mildew ratings of the breeding line were not significant from the resistant cultivars Grand Rapids, Merlot, Redina, and Lolla Rossa except in 2008 (Table 1). Other disease reactions have not been tested.

In the field trials mentioned, three randomly selected plants from each plot were cut at the ground level and weighed. The heads were then cut open to measure core length and core diameter at the base. The number of leaves with tipburn disorder in each head was also noted.

Limited samples of seed are available from the author for distribution to all interested parties for research purposes, including the development and commercialization of new cultivars. Samples will also be deposited in the National Plant Germplasm System. It is requested that appropriate recognition be made if the breeding line contributes to research or the development of new germplasm, breeding lines, or cultivars. 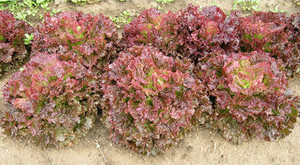