The genus Cornus contains 58 species of trees, shrubs, and herbs that are mostly distributed throughout the northern hemisphere (Xiang et al., 2006). Flowering dogwood (C. florida), kousa dogwood (C. kousa), and their interspecific hybrids are considered the most popular and economically significant members of the genus in the nursery and landscape industries. These deciduous trees are valued for their spring display of pink, red, or white bracts, brilliant-red fall foliage, and exfoliating bark. Retail and wholesale sales of dogwood in the United States account for over $30 million dollars annually with 73.1% of these sales coming from eight states [Maryland, Minnesota, New Jersey, North Carolina, Ohio, Oregon, Pennsylvania, and Tennessee (U.S. Dept. of Agriculture–National Agricultural Statistics Service, 2010)]. Sales in Tenneessee account for 21.9% of total sales of deciduous flowering trees, making it an important crop for the state’s economy. Additionally, six counties in Tennessee produce substantial amounts of 1-year-old liners that are sold to out-of-state nurseries for finishing and resale. In nursery production, a liner refers to a small tree that is transplanted and allowed to become a larger tree for sale by wholesale or retail outlets. These liners ultimately supply ≈80% of the country’s dogwoods (Simmons, 2002). Large-bracted dogwoods are widely grown throughout midtemperate regions of eastern North America, both in the wild and as coveted ornamental trees in urban and suburban landscapes. Across this range, flowering dogwoods have been severely affected by dogwood anthracnose [Discula destructiva (Redlin, 1991)] and powdery mildew [Erysiphe pulchra (Li et al., 2009)].

Because of the importance of dogwoods to the U.S. agricultural economy, an improvement program was initiated over 20 years ago at the University of Tennessee to develop disease-resistant cultivars of dogwoods. These efforts have resulted in the release of the first flowering dogwood cultivar (Appalachian Spring) with resistance to dogwood anthracnose (Windham et al., 1998) and three powdery mildew resistant cultivars: Jean’s Appalachian Snow, Karen’s Appalachian Blush, and Kay’s Appalachian Mist (Windham et al., 2003).

Cornus kousa is more tolerant to anthracnose and powdery mildew than C. florida (Holmes and Hibben, 1989; Ranney et al., 1995). Hybrids between these two species are generally more vigorous than typical plants of either parent species and have field resistance or tolerance to dogwood anthracnose and powdery mildew (Ranney et al., 1995). There are over 100 named cultivars of C. kousa and many cultivars are the result of either selection of open-pollinated seedlings or spontaneous sports rather than systematic breeding (Cappiello and Shadow, 2005).

The objective of this project was to evaluate ≈400 seedlings of C. kousa for disease resistance and horticultural traits such as color, degree of overlap, size of bracts, tree form, and bark and leaf characteristics. From these, three genotypes were selected for development and release.

The origin of the C. kousa seedlings and methodology for disease screening is described in Augé et al. (2002). Briefly, open-pollinated seeds were bulked from maternal parents ‘Big Apple’, ‘Snowbird’, ‘Steeple’, and an unnamed tree and the potential paternal parents ‘Big Apple’, ‘Julian’, ‘Steeple’, and an unnamed tree were provided by Polly Hill of Barnard’s Inn Farm, MA, in 1989. In 1994, seedlings were placed in containers and evaluated for resistance to dogwood anthracnose (D. destructiva) and later planted in a field at the University of Tennessee Forest Resources AgResearch and Education Center in Oak Ridge, TN (USDA Hardiness Zone 7a) as described by Witte et al. (1996). These trees were also visually rated for powdery mildew resistance and those that were susceptible to the disease were removed.

Microsatellite markers were used to compare ‘Empire’, ‘Pam’s Mountain Bouquet’, and ‘Red Steeple’ to 26 cultivars and unnamed accessions of C. kousa that are maintained in the University of Tennessee’s kousa dogwood collection. The methodology for isolation, polymerase chain reaction, and electrophoresis of DNA were as reported in Wadl et al. (2008a, 2008b). Data from the microsatellite loci were analyzed with POPULATIONS Version 1.2.32 (Langella, 2002) to estimate the shared allele distance (Jin and Chakraborty, 1994) and to create a pairwise matrix of genetic similarities. A dendrogram was generated from the similarity matrix by the unweighted pair group method using arithmetic averages (UPGMA).

The multilocus allelic data were used to create the allele-sharing distance matrix for the C. kousa genotypes and then a UPGMA tree was generated (Fig. 4). The pairwise similarity coefficients ranged from 0.40 to 1.00 and 155 of 406 pairwise comparisons were 0.75 or higher. The lower the value the more similar, the individual is based on the microsatellite analysis. All C. kousa individuals were separated and clustered into four main groups. ‘Empire’, ‘Pam’s Mountain Bouquet’, and ‘Red Steeple’ are genetically distinct from the other 26 cultivars and lines. ‘Empire’ and ‘Red Steeple’ clustered with other upright or vase-shaped cultivars [Doubloon, National, and Steeple (Cappiello and Shadow, 2005)]. The high diversity indicated by the shared allele distances reflects the obligate outcrossing nature of dogwoods.

A plant patent has been applied for ‘Pam’s Mountain Bouquet’. A limited quantity of bud wood has been distributed to selected wholesale nurseries in Tennessee and Japan. Additional bulking of these cultivars through budding by selected nurseries (under confidentiality agreements and propagation agreements) has been accomplished. Contact R.N. Trigiano (rtrigian@utk.edu) for additional details. 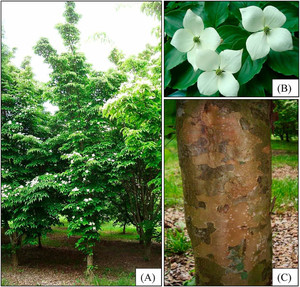 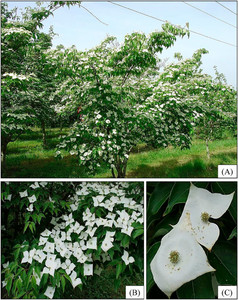 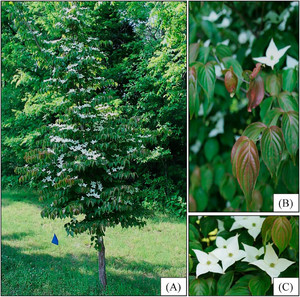 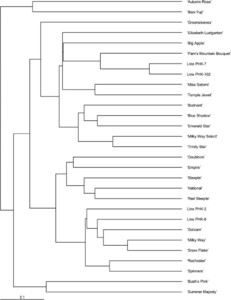