Search for other papers by Brent K. Harbaugh in
ASHS
Google Scholar
PubMedClose

Caladiums (Caladium ×hortulanum Birdsey, Araceae Juss.) are often used to provide color and a tropical ambiance to container gardening or the landscape (Evans et al., 1992). Approximately 95% of the caladium tubers used in the United States and worldwide are produced in Florida. Red fancy-leaved cultivars accounted for 23% of the acreage planted by Florida caladium growers (Bell et al., 1998). ‘Freida Hemple’ (33%) and ‘Postman Joyner’ (13%) accounted for nearly half of the red fancy-leaved cultivars commercially grown. ‘Florida Cardinal’, released from the University of Florida caladium breeding program in 1988 (Wilfret, 1988), comprised 7% of the red fancy-leaved cultivars grown. It was selected primarily for use in containers because it produces many leaves without the need to de-eye tubers. Recently, ‘Freida Hemple’ was found highly susceptible to fusarium tuber rot, the most important disease that affects caladium tuber quality (Goktepe et al., 2007). ‘Postman Joyner’ and ‘Florida Cardinal’ were also susceptible to fusarium tuber rot (Goktepe et al., 2007). Therefore, there was a strong need for new red fancy-leaved caladium cultivars. Royal FlushTM ‘UF-18-49’ is a new red fancy-leaved cultivar that has been selected for its vigor, tall stature, large leaf size, and sun tolerance. It has shown outstanding performance in container forcing and landscape planting trials in Florida, and it was selected as “Best of the Best” in the 2013 Ohio State University cultivar trials (Dolce, 2013; Pangborn and Pasian, 2013).

Royal FlushTM ‘UF-18-49’ (Fig. 1) was selected in 2001 out of progeny from a cross between UF-702 and ‘Red Flash’ (Fig. 2). UF-702 was a breeding line derived from a cross between an unnamed sport of ‘Aaron’ and UF-FCB, a breeding line resulting from the cross ‘Fire Chief’ × ‘Buck’. ‘Red Flash’ and ‘Aaron’ are major commercial cultivars known for their attractive leaf colors, strong plant vigor, good sun tolerance, high tuber yields, and large tuber sizes (Bell et al., 1998; Deng et al., 2011). ‘Fire Chief’ and ‘Buck’ are commercially produced on a much smaller scale, but they carry unique characteristics: the former produces red translucent leaves and the latter deep dark red leaves. The ancestries of ‘Aaron’, ‘Fire Chief’, ‘Red Flash’, and ‘Buck’ are unknown.

Leaves of Royal FlushTM ‘UF-18-49’ are peltate, sagitate-cordate, with palmate-pinnate venation. Primary and secondary veins are red (RHS 53B to 53D). The upper surface has a green (RHS 137A) margin, up to 15 mm wide, bordering the entire leaf except for the basal leaf sinus where it is grayed purple (RHS 187B). Interveinal areas and the primary veins in the center of the leaf blade are grayed purple (RHS 187B). The undersurface is primarily a grayed green (RHS 191A) with red–purple (RHS 60A and 60B) primary veins. Petioles are 4 to 7 mm in diameter and are grayed purple (RHS 187A) to black (RHS 202A). Tuber surfaces are brown (RHS 200C–D) with the cortical area yellow (RHS 10B). Jumbo tubers are multisegmented, usually bearing three to five dominant buds.

Royal FlushTM ‘UF-18-49’ was evaluated for tuber production and plant performance at the Gulf Coast Research and Education Center in Wimauma, FL, in 2005 and 2006. The soil was an EauGallie fine sand with 1% organic matter and a pH of 6.2. Plants were grown in a plastic-mulched raised-bed system maintaining a constant water table with seep irrigation (Geraldson et al., 1965). For the 2005 evaluation, ground beds were fumigated on 25 Feb. 2005 (6 weeks before planting) with a mixture of 67% methyl bromide and 33% chloropicrin (by volume) at the rate of 392 kg·ha−1. For the 2006 evaluation, ground beds were fumigated on 10 Mar. 2006, 10 d before planting, with the same fumigant mixture but at the half rate, 196 kg·ha−1. The ground beds were 91 cm wide and 20 cm high, and caladium seed pieces (cut tuber propagules, ≈2.5 cm) were planted 15 cm apart in three rows. Controlled-release fertilizer Osmocote 18N–2.6P–10K (8-9 months; Scotts Co., Marysville, OH) was applied to the bed surface when caladium shoot tips emerged from the soil with nitrogen at 336 kg·ha−1.

Field plots were organized in three randomized complete blocks, and each plot was 1.25 m2 with 30 plants. In 2005, seed tuber pieces were planted in April and new tubers were harvested in November; in 2006, seed pieces were planted in April and new tubers were harvested in December. Newly harvested tubers were washed and dried before they were weighed, graded, and counted per plot. Tubers were graded into five categories by their diameter: No. 2 (2.5 to 3.8 cm), No. 1 (3.8 to 6.4 cm), Jumbo (6.4 to 8.9 cm), Mammoth (8.9 to 11.4 cm), and Super Mammoth (greater than 11.4 cm). The production index, an indicator of economic value of the harvested tubers, was calculated as: N (No. 2) + 2N (No. 1) + 4N (Jumbo) + 6N (Mammoth) + 8N (Super Mammoth), where N = number of tubers in each grade. An analysis of variance was conducted using the GLM procedure in the SAS program (SAS Institute, 2009) to compare the performance of Royal FlushTM ‘UF-18-49’ with that of ‘Florida Cardinal’, ‘Freida Hemple’, and ‘Postman Joyner’. The latter cultivars are important commercial red fancy-leaved caladium cultivars.

Royal FlushTM ‘UF-18-49’ was significantly more productive by several measures of performance than all the commercial cultivars in 2005. The tuber weight was 18% to 56% greater, number of marketable tubers 27% to 40% more, and production index 25% to 77.8% higher than the other red cultivars (Table 1). In 2006, Royal FlushTM ‘UF-18-49’ was comparable to ‘Florida Cardinal’, ‘Freida Hemple’, and ‘Postman Joyner’ in tuber weight, number of marketable tubers, and production index, except that its number of marketable tubers was smaller than that of ‘Freida Hemple’. The size distribution of tubers produced by Royal FlushTM ‘UF-18-49’ was similar in 2005 and 2006 growing seasons: ≈60% of the tubers were graded as No. 1 and Jumbo, and ≈20% were in the Mammoth size.

Landscape performance under full-sun conditions was evaluated in 2005 and 2006 on the same plots used for evaluating tuber production. The overall plant performance was rated in two growing seasons on a scale of 1 to 5 with 1 being very poor (few leaves and lack of vigor) and 5 being excellent (full plants, numerous leaves, and bright color display). Leaf sunburn tolerance was also evaluated in each growing season on a scale of 1 to 5 with 1 being very susceptible to sunburns and showing numerous sun-damaged areas or holes on leaves and 5 being resistant to sunburns and not showing any sun-damaged areas. At ≈4 months after planting, plant height, number of leaves, and foliar characteristics were measured.

The suitability of Royal FlushTM ‘UF-18-49’ for container forcing was evaluated by forcing tubers in 11.4-cm containers and comparing growth parameters with the same three cultivars used in field tests. No. 1 tubers were planted either intact or de-eyed in a peat/vermiculite mix (VerGro Container Mix A; Verlite, Tampa, FL) on 3 Apr. 2006. The study was conducted in a greenhouse with 45% light exclusion during the summer in Wimauma, FL. Daily temperatures ranged from a low of 16 °C at night to 29 °C during the day during the experiment. Potted plants were arranged on metal benches in the greenhouse in a randomized complete block design with 10 replications. Plant height, number of leaves, and foliar characteristics were recorded 8 to 10 weeks after planting.

Plant performance for caladium cultivars grown from No. 1 tubers in 11.4-cm containers in a 45% shaded glasshouse in Wimauma, FL, in 2006.z

Plants of Royal FlushTM ‘UF-18-49’ are vigorous with large leaves that are bright and attractive even when grown in full sun. These characteristics make Royal FlushTM ‘UF-18-49’ suitable for use in the landscape (sunny or shady locations) or large containers. To force this cultivar in small containers, tubers should be de-eyed before planting. Although extensive research and evaluations of this cultivar have been performed on small acreages, tuber producers are encouraged to plant only limited quantities of Royal FlushTM ‘UF-18-49’ until having gained experience in producing this cultivar. Standard postharvest treatment of tubers is recommended (Harbaugh and Tjia, 1985) and pre-plant hot water treatment of tubers (Rhodes, 1964) is encouraged to prolong their life.

A plant patent has been granted for ‘UF-18-49’ caladium under the Plant Patent Number PP24,431. Production of this cultivar is to be with a licensing agreement with the Florida Foundation Seed Producers, Inc., P.O. Box 309, Greenwood, FL 32443. Information on tuber availability and propagation agreements can be obtained from the Florida Foundation Seed Producers, Inc. (<http://www.ffsp.net/>). 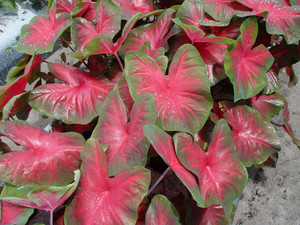