Trees of ‘GulfAtlas’ are vigorous, semispreading, and produce an attractive, sweet-tasting, yellow, and non-melting flesh fruit intended for the fresh fruit market. It is expected to produce fruit with tree-ripened taste while retaining firmness for longer shelf life than fruit from conventional melting-flesh cultivars. ‘GulfAtlas’ is suggested for trial in north Florida and south Georgia.

‘GulfAtlas’ originated in Attapulgus, GA, from a 2000 cross of ‘Flavorcrest’ by FL98-10C and was selected and propagated in 2003 for testing as AP03-22 at Attapulgus. The pollen parent is of complex origin (Fig. 1).

Standards and methods used in this program to evaluate selections have been described (Beckman et al., 1995; Beckman and Krewer, 1999). Trees of ‘GulfAtlas’ are estimated to require 400 chill units (Sherman and Lyrene, 1998) based on full bloom consistently occurring between ‘Flordaking’ peach (350 chill units) and ‘Sunlite’ nectarine (450 chill units) at Attapulgus where full bloom of ‘GulfAtlas’ occurs most seasons in mid-February (Table 1). ‘GulfAtlas’ has fruited acceptably well at Attapulgus where the mean temperature [(mean daily maximum + mean daily minimum)/2] of the coldest month (January) averages 11.4 °C. The Florida model (Sharpe et al., 1990) suggests that a 400 chill unit variety like ‘GulfAtlas’ would fruit well at a location where the coldest month averaged 12 to 14 °C (Sharpe et al., 1990), i.e., in a band starting a little south of Attapulgus to around the latitude of Gainesville, FL, and in colder locations such as Attapulgus in the absence of spring frosts. Thus, we expect this new peach to be adapted in areas where ‘Flordaking’ and ‘Sunlite’ have been grown successfully. Fruit ripen in mid-June at Attapulgus, ≈120 d after full bloom (Table 1) and usually ≈3 weeks after ‘Gulfcrimson’ and ‘June Gold’ and 1 week before ‘Suwanee’ (Table 2). Trees are vigorous, productive, and without alternate bearing. Trees set a high number of flower buds, have few blind nodes (Richards et al., 1994), and exhibit little bud failure (bud drop) before bloom (Weinberger, 1967). Fruit thinning is normally required to size fruit and prevent limb breakage.

Tree performance and fruit characteristicsz of ‘GulfAtlas’ and reference cultivars (Attapulgus, GA, 2003–12; only 2005–12 data for ‘Suwanee’).

‘GulfAtlas’ fruit have been observed on the original seedling and budded trees since 2003 (except in 2004 when fruiting age trees were not available). Fruit are very large, round to slightly elongated, and attractive (Fig. 2), averaging nearly 200 g (73 mm diameter) when thinned to ≈15 cm apart. Buttons have not been observed in fruit of ‘GulfAtlas’. Commercially ripe fruit exhibit ≈75% red blush over an attractive yellow ground color. Fruit shape is round with a recessed tip. Flesh displays some red pigmentation near the pit and the pit itself is red. Flesh texture is smooth, without strings, but is clingy to the pit even when fully ripe. Flesh is firm with good sweetness (10 to 12 °Brix) and does not brown readily on bruised or cut surfaces. Pits are medium to large and have not been observed to split even when croploads are light.

The most evident weakness of ‘GulfAtlas’ is its variable cropping history. Nevertheless, it has been substantially better than the old standard for the lower coastal plain industry in the midsummer season, ‘Suwanee’, which in the last eight seasons has had only two crops deemed commercially usable. In contrast, ‘GulfAtlas’ produced five usable crops in the nine seasons that fruiting age trees were available for observation. In those years in which ‘GulfAtlas’ suffered a significant crop reduction, it was clearly the result of damage by late spring frosts. Such damage could possibly have been mitigated by frost protection such as overhead irrigation or wind machines. In contrast, crop losses in ‘Suwanee’ could be attributed to frost only in 2008, 2011, and 2012 when even its substantially later bloom date did not save it. Poor crops in 2005 and 2006 on ‘Suwanee’ could possibly have been the result of inadequate winter chilling. However, in 2007 when ‘Suwanee’ achieved its best crop, chilling was similar or actually lower. Additionally, in 2010 winter chilling was well above the 650 h ‘Suwanee’ requires (Okie, 1998), but there were no credible frost events near or after bloom to blame for the near zero crop. 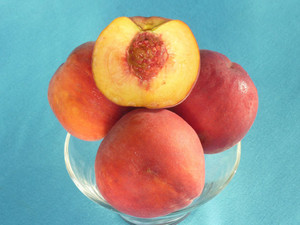