‘Sweet Sunrise’ was selected in 2000 from the cross ‘Puget Reliance’ × B 754 made in 1998 and was tested as ORUS 2240-1 (Fig. 1). The purpose of the cross was to combine the characteristics of elite eastern and western U.S. breeding material. ‘Puget Reliance’ (USPP 9310; BC 77-2-72 × WSU 1945) is a standard in the Pacific Northwest, especially for the fresh market strawberry industry, as a result of it being high-yielding, large-fruited, and well-adapted to the Pacific Northwest climate and virus disease complexes (Moore, 1995; Moore et al., 1995). B 754 (MDUS 5132 × NYUS 113) was an advanced selection in the USDA-ARS, Beltsville, MD, breeding program directed by G.J. Galletta (deceased) from 1977–98 that was identified by C.E. Finn as being potentially valuable germplasm for the breeding program in Oregon because of its large, attractive fruit, very good eating quality, and perceived high yields. ‘Sweet Sunrise’ was tested at the Oregon State University–North Willamette Research and Extension Center (Aurora, OR), Washington State University Puyallup Research and Extension Center (WSU-Puyallup; Puyallup, WA), and Agriculture and Agri-Food Canada, Pacific Agri-Food Research Center (AAFC; Abbotsford, British Columbia, Canada) as well as at grower fields in Washington and Oregon. The most thorough commercial testing was conducted at Goddik Farms (Dayton, OR), Kraemer Farms (Mount Angel, OR), Janzen Farms (Amity, OR), and Sakuma Bros. Farms (Burlington, WA). At the public research facilities, ‘Sweet Sunrise’ was planted in multiple replicated trials established from 2003 to 2012.

In all research trials, the plants were grown in a matted row system, the predominant commercial system in the Pacific Northwest. Plants were grown in eight-plant plots with plants initially set at 46 cm apart in the row in Oregon and British Columbia and 38 cm apart in Washington. The trials had three replications. The plantings were fertilized, renovated, and irrigated using standard commercial practices; 350 kg·ha−1 fertilizer (16N–7P–13.3K) applied after renovation and another 175 kg·ha−1 in spring; application of herbicide (clopyralid) followed by mowing of old foliage with other pre-emergent herbicides used in summer (sulfentrazone, pendimethalin) and fall (pendimethalin, napropamide); and 2.5 to 5.0 cm of water per week as irrigation or rainfall. Other than two fungicide applications (one each of azoxystrobin and cyprodinil/fludioxonil) during bloom to control botrytis fruit rot (Botrytis cinerea Pers.:Fr.), the plantings received no pesticide applications. Fruits were harvested once a week. The average fruit weight for a season was calculated as a weighted mean based on the weight of a randomly selected subsample of 25 fruit from each harvest. The weighted mean was calculated by multiplying the 25 berry weight each week by the total harvest for that week and then that figure for each week was summed and then divided by the total harvest for the season. In multiple-year trials, yield, average fruit weight, and average fruit rot were analyzed as a split plot in time with year as the main plot and cultivar as the subplot. Fruit firmness was measured in the WSU-Puyallup and AAFC trials as the force required for a 4-mm-diameter cylinder (Hunter Spring Mechanical Force Gauge Series L; Ametek, Hatfield, PA) to penetrate to a depth of 6 mm in five randomly selected fruit from each harvest. The average fruit firmness for a season was calculated as a weighted mean similarly to the average fruit weight. The plantings and the analyses (PROC GLM; SAS Institute, Cary, NC) included the industry standards ‘Hood’, ‘Puget Reliance’ ‘Tillamook’, and/or ‘Totem’ along with other advanced selections or cultivars being evaluated for adaptation (Finn et al., 2004; Hokanson and Finn, 2000). Plant vigor and fresh fruit characteristics including appearance, firmness, external and internal color, capping (ease with which the calyx was removed), and flavor were rated subjectively at least three times each year in Oregon using a 1 to 9 scale (1 = poor vigor, uneven rough appearance, soft fruit, very light-colored, poor separation of calyx from receptacle, and poor flavor and 9 = very vigorous, very uniform and attractive, very firm, dark red, calyx separates easily from the receptacle, and intense flavor, respectively). In multiple years, duplicate subsamples of ≈200 g each were taken randomly from frozen and thawed harvested fruit and were evaluated for soluble solids content, pH, and titratable acidity in the laboratory (Mathey et al., 2013). Analysis of variance was conducted on the fruit chemistry and subjectively evaluated trait data after checking for normality (PROC UNIVARIATE; SAS Institute) and transformation before analysis was required for the subjectively evaluated traits. Fruit were also evaluated informally as a thawed, individually quick frozen (IQF) product by growers, processors, and researchers.

‘Sweet Sunrise’ was high-yielding in every trial with yields comparable to or higher than other recent releases such as ‘Charm’, ‘Valley Red’, and ‘Sweet Bliss’ or the industry standards ‘Tillamook’, ‘Totem’, and ‘Hood’ in each location (Tables 1 and 2) (Daubeny et al., 1993; Finn et al., 2004, 2009, 2011, 2013; Hokanson and Finn, 2000). In Oregon trials, ‘Sweet Sunrise’ had mean yields that were consistently at or near the top for the cultivars in trial (Table 1). Often, the yields were significantly higher than ‘Totem’ in the first harvest year but not the second. This was likely the result of variability in the trial because the yields were always numerically higher and the percent drop in yield from Year 1 to Year 2 was consistently a lower percentage than that of ‘Totem’ (data not shown). In Washington, ‘Sweet Sunrise’ was higher yielding than ‘Hood’ in the second year and had the highest yields over the two harvest seasons (Table 2). Although only harvested the first year after planting in British Columbia, ‘Sweet Sunrise’ was not as high yielding as some cultivars in the trial but had comparable yields to many Northwest standards such as ‘Totem’ (Table 2). Although not always significant, in nearly every trial at all three locations over each year of evaluation, ‘Sweet Sunrise’ was either the lowest or among the lowest for fruit lost to fruit rot (B. cinerea). The low incidence of fruit rot was a bit surprising because cultivars that ripen early when there is a greater chance of wet, humid conditions are often more inclined to fruit rot. The upright architecture of flowering/fruiting truss in ‘Sweet Sunrise’ may partly be the reason for this lower incidence of fruit rot. 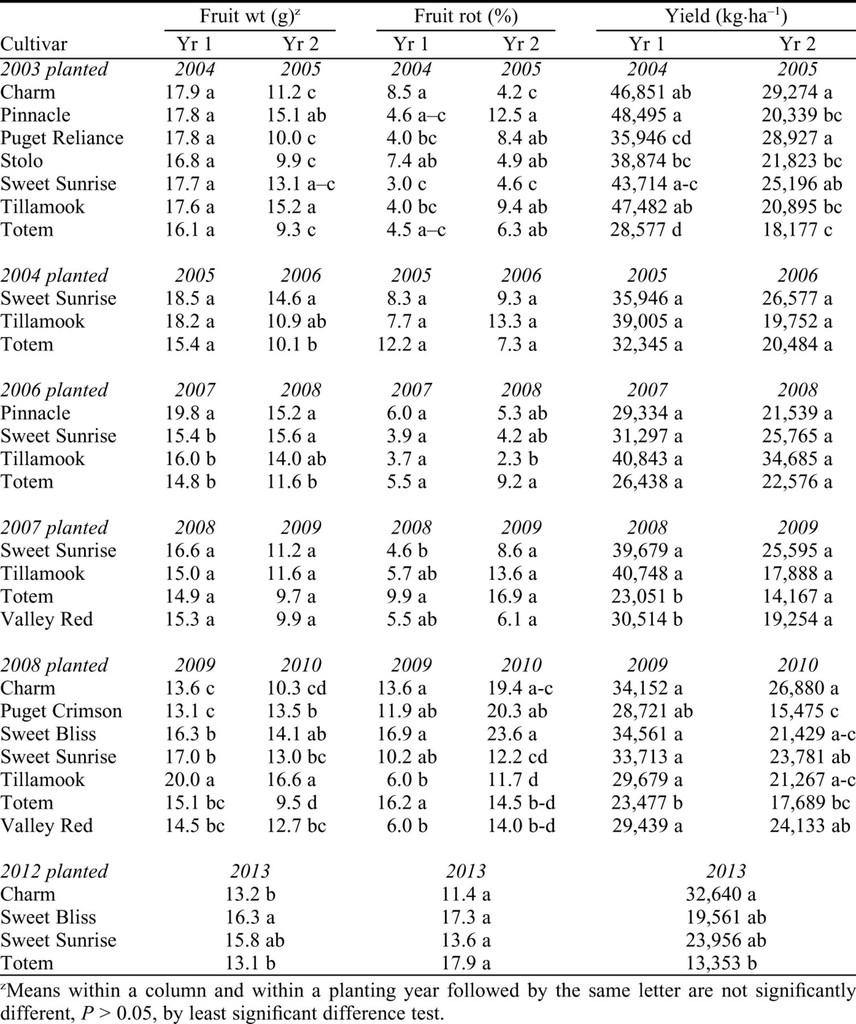 Yield, fruit size, fruit firmness, and percent fruit rot for ‘Sweet Sunrise’ and other cultivars in replicated trial at Washington State University–Puyallup (Puyallup, WA) and for fruit yield, weight, and percent rot, and for seven genotypes, firmness at Agriculture and Agri-Food Canada (Abbotsford, British Columbia, Canada) planted in 2007 in both locations but only harvested in a single year in British Columbia.

‘Sweet Sunrise’ has excellent overall fresh fruit quality (Tables 2 and 3). ‘Sweet Sunrise’ was firm at WSU-Puyallup and AAFC where fruit firmness was measured objectively in each year of trial (Table 2). The firmness values were generally reflective of observed fruit firmness. In subjective trials over several years and several plantings in Oregon, ‘Sweet Sunrise’ fruit were rated softer than ‘Tillamook’ but firmer than ‘Puget Reliance’ and ‘Totem’ (Table 3). The fruit were very attractive being well formed and symmetrical and rated as being more attractive than ‘Puget Crimson’, ‘Tillamook’, and ‘Totem’ (Table 3; Figs. 2 and 3). The earliest ripening cultivars tend also to be earlier flowering when environmental conditions are less suited to good pollinator activity and incomplete pollination can lead to “rough” fruit as a result of poorer achene set. ‘Sweet Sunrise’ had consistently firm fruit. ‘Sweet Sunrise’ fruit had excellent, uniform, and ideal external color, not typically as dark as ‘Valley Red’ but darker colored than ‘Puget Reliance’ (Fig. 3; Table 3). The fruit were uniformly deep, bright red when cut open (Table 3). In research evaluation, the fruit were rated as the poorest of the cultivars for capping (Table 3). Although this is a positive trait for the fresh market, it is a negative trait for fruit being harvested for processing. In the commercial trials of ‘Sweet Sunrise’ where the field is not picked until as late as possible to maximize harvest efficiency, no problems were mentioned by picking crews or fieldmen with capping. ‘Sweet Sunrise’ fruit tasted very good with a good acid to sweetness balance (Table 3). ‘Sweet Sunrise’ fruit were rated as not quite as good as ‘Puget Crimson’ for flavor, comparable to ‘Sweet Bliss’ and better than the other cultivars in the trial in Oregon.

Mean scores over eight years for subjectively evaluated characteristics in the field for ‘Sweet Sunrise’ and six other strawberry cultivars planted at Oregon State University’s North Willamette Research and Extension Center (Aurora, OR).

As part of the breeding program, thawed, IQF fruit of each genotype were evaluated by an expert panel of researchers and industry members annually in the off-season. In all evaluations, ‘Sweet Sunrise’ was rated excellent and comparable to ‘Totem’ for commercial processors (data not shown). The fruit chemistry values for ‘Sweet Sunrise’ were good and acceptable for commercial processing (Table 4). The soluble solids content was not as high as for ‘Hood’ or ‘Puget Crimson’ but comparable to the other cultivars in the trial. Ideally fruit for processing have a pH near 3.50 (Wrolstad et al., 2008). In the years of trial, the pH was comparable to ‘Hood’ and ‘Totem’, which are good processing cultivars (Table 4). Although ‘Sweet Sunrise’ fruit had low titratable acidities, they were comparable to ‘Totem’, ‘Hood’, and ‘Tillamook’, which are suitable for processed fruit. In the evaluation of chemistry of fruit from AAFC trials, the chemistry traits were comparable to those for ‘Totem’ or ‘Tillamook’ obtained in Oregon (data not shown).

Soluble solids, pH, and titratable acidity for fruit purees of 11 strawberry cultivars grown at the Oregon State University–North Willamette Research and Extension Center (Aurora, OR) from 2004 to 2011 and for a single harvest in 2008 of seven cultivars planted with Agriculture and Agri-Food Canada (Abbotsford, British Columbia, Canada). 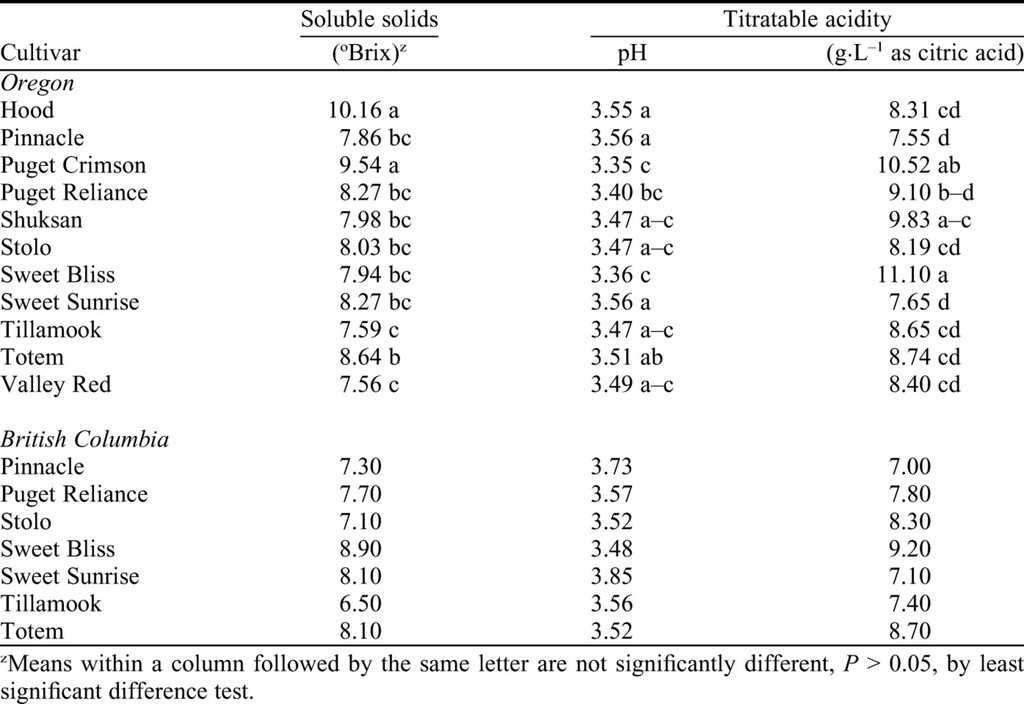 Mean dates when harvest passed 5%, 50%, and 95% of total yield and the length of the harvest season for ‘Sweet Sunrise’ and other cultivars picked in the same years from trials at Oregon State University’s North Willamette Research and Extension Center (OSU-NWREC; Aurora, OR) and at Washington State University (WSU)–Puyallup Research and Extension Center.

‘Sweet Sunrise’ plants were more vigorous than all of the other cultivars it was compared with (Fig. 4; Table 3). Although vigorous, the plant architecture was more similar to ‘Tillamook’, which is upright and open with fewer crowns per plant than ‘Charm’, which is dense with many crowns (Finn et al., 2013). Although not screened for any particular disease resistance in the Northwest, the plants held up well through the second harvest season and appear to have good virus tolerance. Under our minimal spray program, ‘Sweet Sunrise’ did not show any particular susceptibility to pests. In bench screening tests conducted by Agriculture and Agri-Food Canada (Kentville, Nova Scotia, Canada), ‘Sweet Sunrise’ was found to be resistant to Phytophthora fragariae Hickman races Cdn-4 and Cdn-5.

A plant patent application has been submitted. The nuclear stock plants for propagation have tested negative for Apple mosaic, Tomato ringspot, Strawberry mild yellow edge, Tobacco streak, and Strawberry necrotic shock viruses by enzyme-linked immunosorbent assay and negative for Strawberry mottle, Strawberry veinbanding, Strawberry crinkle, Strawberry pallidosis, Strawberry latent ringspot, Beet pseudo yellows, and Fragaria chiloensis latent viruses in reverse transcription–polymerase chain reaction (PCR), phytoplasmas in PCR assays, and have indexed negative when grafted ontounder F. vesca L. Further information on licensing or a list of nurseries propagating ‘Sweet Sunrise’ are available on written request to C. Finn as is contact information for commercial laboratories that are able to genetically fingerprint vegetative tissue to determine whether a genotype is ‘Sweet Sunrise’. The USDA-ARS does not have commercial quantities of plants to distribute. In addition, plants of this release have been deposited in the National Plant Germplasm System, accession number CFRA 2118.001 (PI 664910), where they will be available for research purposes, including development of new cultivars.

Pedigree of ‘Sweet Sunrise’ strawberry; the female parent is on top. 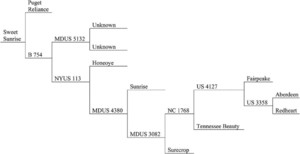 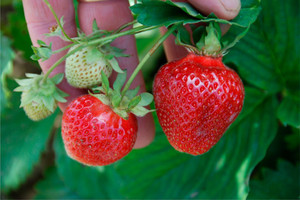 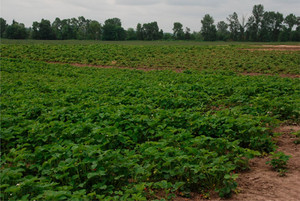