‘Sava’ and ‘Krka’ are new walnut cultivars of Slovene origin. They were developed and evaluated at the Biotechnical Faculty Ljubljana, Slovenia, and were released in 2013. ‘Sava’ is a late-leafing cultivar, appropriate for orchard planting in continental climatic conditions. It has good and regular crop, owing to an intermediate fruiting pattern and good balance between vegetative growth and fruiting. As the homogamous cultivar, ‘Krka’ is suited for home gardens as a solitary tree that forms a densely branched canopy with a rather erect to spreading growth habit and lateral fruiting pattern. As a result of its good yielding capacity, it is also recommended for orchard planting in warmer areas.

‘Sava’ and ‘Krka’ were selected out of a Slovene domestic population of Persian walnut (Juglans regia L.). ‘Sava’ was tested as ‘Zdole-59’ and ‘Krka’ as ‘Erjavec’ (Solar and Stampar, 2006). Because the original trees grow in the vicinity of rivers Sava and Krka, the new cultivars were named after them. The selection was guided as a competition for collecting high-quality nuts in which owners of perspective trees were invited to send their walnut samples for evaluation. A total of 1215 genotypes were observed on-farm for their phenological and vegetative traits as well as for pomological traits of the nuts in a 3-year period, resulting in 24 preselected genotypes. They were clonally propagated and planted in ex situ collection Maribor together with ‘Franquette’ and Geisenheim sel. No. 139 (‘G-139’) as control cultivars. After 15 years of field and laboratory evaluations, which were conducted according to IPGRI (1994) and UPOV (1988) , ‘Sava’ and ‘Krka’ were chosen as cultivars strongly fitted to selection goals, which were late leafing date, low susceptibility to walnut blight (Xanthomonas arboricola pv. juglandis) (WB), and walnut husk fly (Rhagoletis completa Cresson) (WHF), intermediate or lateral fruiting habit, and high-quality, medium-sized nuts with a smooth shell, bright kernel, and high kernel percentage (Solar et al., 2002, 2003).

The time of leaf bud burst is late, 2 d before ‘Franquette’ and a week later than ‘G-139’ (Fig. 1). The first female and male flowers appeared 3 and 4 years after planting, respectively. Flowering is protandrous without any overlapping between pollen shedding and pistillate flowers’ receptivity. They can be efficiently pollenized by ‘Meylannaise’, ‘Ronde de Montignac’, and Slovene variety ‘Elit’. ‘Sava’ is an early-maturing variety, harvested in mid-September, 1 to 2 weeks before ‘Franquette’. Leaves fall at the beginning of November, similar to both control cultivars.

The tree is of strong vigor and high branching density (Table 1; Fig. 2). It has a spreading growth habit with strong shoots (Kelc et al., 2007, 2010), low susceptibility to WB and WHF, and good winter-hardiness. Owing to late leafing, it is not susceptible to late spring frosts. It bears nuts on the tops of strong annual shoots that are inserted on 2-year-old or older parent shoots (intermediate fruiting behavior). Vegetative growth and fruiting are very well balanced. Yield is regular, about the same as in ‘Franquette’ and higher than in ‘G-139’, having better yield efficiency than both control cultivars (Fig. 3).

Tree characteristics of Sava and Krka cultivars in comparison with standard cultivars Franquette and G-139 according to IPGRI (1994) and UPOV (1988).z 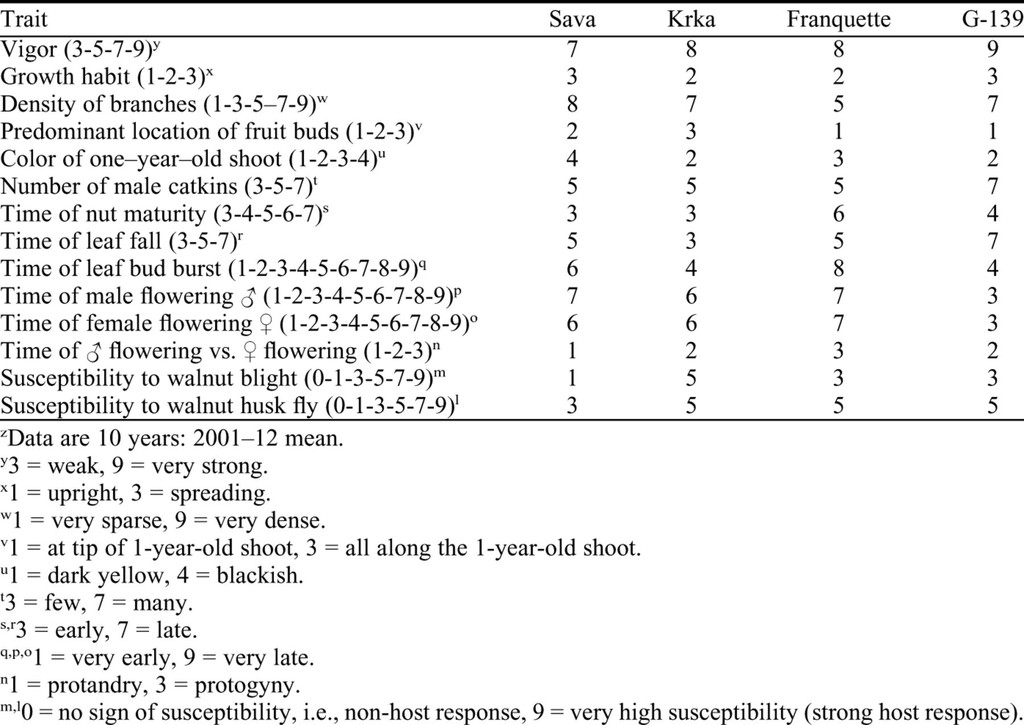 The nut is of medium to large size and a long trapezoid shape with a strong apical tip and a smooth shell (Fig. 4). The kernel is bright and can be easily removed from the shell. Kernel percent is medium, ranging between 38% and 49% (Table 2).

Nut and kernel traits of Sava and Krka cultivars in comparison with standard cultivars Franquette and G-139 according to UPOV (1988).z

This is an early to medium leafing cultivar with the same date of leaf bud burst as ‘G-139’. Flowers were first observed in the second year (females) and in the fifth year (males) after planting. Flowering is highly homogamous. Pollen shedding completely coincides with pistillate bloom and assures self-pollination and yielding without other pollenizers (Fig. 1). The tree produces a lot of male inflorescences and could be used as a pollenizer for medium-flowering cultivars such as ‘Chandler’, ‘Adams’, and ‘Ferjean’. ‘Krka’ harvest occurs in midseason, ≈1 week earlier than in ‘Franquette’. Leaves fall in the last days of October, 2 to 3 d earlier compared with both control cultivars.

The tree is very vigorous and densely branched (Table 1; Fig. 5) with a semiupright to spreading growth habit, medium susceptibility to WB and WHF, good winter-hardiness, and medium susceptibility to late spring frosts. It has a lateral fruiting behavior and bears nuts on short but vital annual shoots that have from 50% up to 86% fruitful lateral buds. Vigorous growth and high yielding are in good balance. Yield is high and regular and exceeds both control cultivars. Considering yield efficiency, ‘Krka’ is similar to ‘Franquette’ and better than ‘G-139’ (Fig. 3).

The nut is small to medium, round-shaped with a weak apical tip (Fig. 6). The shell is smooth to slightly grooved and very thin with strong adherence of the halves. A bright kernel is easily removable; the kernel percent frequently exceeds 50% (Table 2).

‘Sava’ and ‘Krka’ were released as public cultivars. Limited quantities of scion wood are available from the senior author.

Phenogram of Krka and Sava cvs. in comparison with standards ‘Franquette’ and ‘G-139’ and pollenizers ‘Elit’, ‘Ronde de Montignac’, and ‘Meylannaise’.

Yield efficiency (cumulative yield per tree, presented as the 12-year average/cm2 trunk cross-sectional area) calculated at the end of the 14th vegetation period. 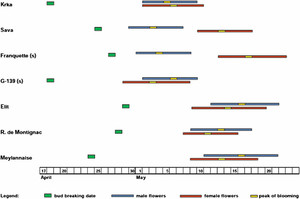 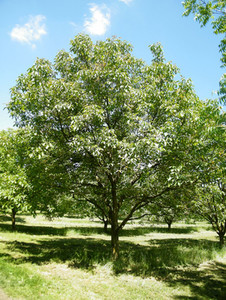 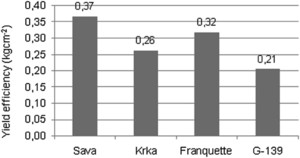 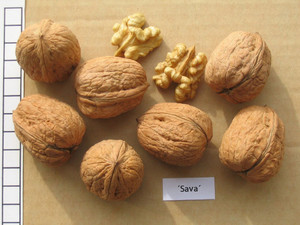 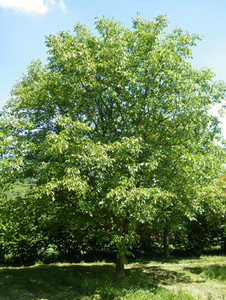 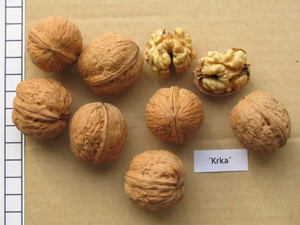