Garden sage (Salvia officinalis L.) is a small herbaceous aromatic, medicinal, and culinary plant from the Lamiaceae family (Pederson, 2000). Garden sage essential oil is extracted from the whole above-ground herbage and has numerous applications as aromatic and medical ingredients in various products such as cosmetic items and also in the food and pharmaceutical industries (Heath, 1978; Tucker et al., 1980). Most of the commercial production of garden sage essential oil is concentrated in countries in eastern Europe, Russia, and in the Mediterranean region (Atanassova and Nedkov, 2004).

Ancient Greeks and Romans have been cultivating and using garden sage as a medicinal and culinary herb for some 2000 years. The plant has and continues to be used in the traditional medicine in many countries, especially in the Mediterranean region. For example, Bulgarian traditional medicine has been using garden sage leaves to improve digestion, to treat stomach cataracts and ulcers, to treat some liver and kidney diseases and inflammations, and to decrease milk in nursing mothers at the end of breastfeeding (Stojanov, 1973). Extract from garden sage also is used for bathing small children with skin inflammations (rashes). Garden sage essential oil has a long history of application in the food and liquor industries (as an aromatic vector in salami, cheese, and wine), in the pharmaceutical industry, and in perfumery and cosmetics (Stojanov, 1973). Garden sage plant extract has also been reported to treat Alzheimer’s disease (Akhondzadeh et al., 2003) and can be used to derive plant-based antibiotic and treat various bacterial diseases in humans (Delamare et al., 2007).

Indeed, recent reports demonstrated a significant effect of steam DT on the essential oil in other species from the same family such as peppermint (Cannon et al., 2013; Zheljazkov and Astatkie, 2012a), oregano (Zheljazkov et al., 2012a), Japanese cornmint (Zheljazkov and Astatkie, 2012b), and lavender (Zheljazkov et al., 2013). The plants from the Lamiacea family have a similar type of essential oil glands (Hay and Svoboda, 1993), and their essential oil is traditionally extracted by steam distillation (Topalov, 1962). Therefore, the objectives of this study were to evaluate a series of steam DTs for garden sage essential oil extraction and develop regression models to predict oil yield and composition of garden sage oil at any given DT. The findings can also be used to compare reports on garden sage oil yield and composition in which different DTs have been used.

Briefly, garden sage transplants were produced in a greenhouse in early spring of 2006 and transplanted out in the field in June 2006 in previously prepared raised beds covered with black plastic mulch. Fertilizers (80 kg·ha−1 P2O and 100 kg·ha−1 K2O,) were applied before land preparation and incorporated into the soil by disking. Nitrogen was applied at 130 kg·ha–1; the rate was based on literature reports. A bed-shaping machine was used to form raised beds (15 cm height, 75 cm wide), to place a drip tape in the middle of the bed at ≈5-cm depth and to cover the bed with black plastic mulch as described previously (Zheljazkov et al., 2012b). Holes in the plastic mulch were made with a propane burner, and garden sage was transplanted in two rows on each bed at 45 cm in-row and 30 cm between-row spacings. The biomass for this DT study was collected in 2010 from well-established 4-year old garden sage plants to provide consistency.

The garden sage was harvested in Aug. 2010, and subsamples of above-ground plant parts (including stems, leaves, and flowers) were dried in a shaded and well-aerated barn. Dried subsamples (250 g each) were extracted in Sept. 2010 by steam distillation in 2-L steam distillation units as described previously in Cannon et al. (2013). In this study, eight different DTs (1.25, 2.5, 5, 10, 20, 40, 80, and 160 min) were performed in random order, each DT in three replications, amounting to 24 separate distillations and 24 oil samples. Each DT was measured from the moment that first drop of essential oil was seen in the separator; at the end of each DT, the power was turned off, the steam was removed, and the separator containing the oil and the water was removed from the distillation unit. The accumulated oil was separated from water, measured on an analytical scale, and kept in a freezer until the gas chromatography analyses were performed. Garden sage essential oil yield (content) was calculated as grams of oil per 100 g of dried garden sage herbage.

The 24 garden sage essential oil samples (representing all DT treatments and replications) were subjected to oil compositional analyses on a gas chromatograph (Hewlett Packard 6890 GC) fitted with an autosampler. The carrier gas was helium, at 40 cm·sec–1, 11.7 psi (60 °C), 2.5 mL·min–1 constant flow rate; the injection was split 60:1, 0.5 µL, the injector temperature was 220 °C, and the oven temperature program was as follows: 60 °C for 1 min and 10 °C·min–1 to 250 °C. The column was HP-INNOWAX (crosslinked polyethylene glycol; 30 m × 0.32 mm × 0.5 µm); the flame ionization detector temperature was 275 °C. Individual peaks representing different oil constituents were identified using internal standards (for all the major constituents) by retention time and also using mass spectroscopy.

The effect of DT on essential oil content and the concentration and yield of α-pinene, camphene, β-pinene, myrcene, limonene, eucalyptol, cis-thujone, transthujone, camphor, borneol, bornyl acetate, β-caryophyllene, α-humulene, veridifloral, humulene epoxide II, and manool was determined using a one-way analysis of variance. For each response, the validity of model assumptions was verified by examining the residuals as described in Montgomery (2013). The effect of DT was significant (P < 0.05) on all yield responses and all concentration responses other than transthujone and borneol. For the responses with a significant DT effect, multiple means comparison was completed using Duncan’s multiple range test at the 5% level of significance, and letter groupings were generated. The analysis was completed using the GLM Procedure of SAS (SAS Institute Inc., 2010).

where Y is the dependent (response) variable, x is the independent (distillation time) variable, and the error term ɛ is assumed to have normal distribution with constant variance. The model parameters are represented by θ (instead of by β used for linear models) to highlight that these models are nonlinear (Bates and Watts, 2007).

Distillation time had a significant effect on essential oil yield (content) of garden sage (Table 1). Overall, the oil yields in different DTs ranged from 0.06% to 0.33% based on the dry weight. The essential oil yields increased with increasing DT from 1.25- to 10-min DT; after that, there was no significant increase in oil yields. Monoterpenes represented the major percentage (58.2% to 84.1%) of oil composition followed by sesquiterpenes (4.03% to 16.12%) and diterpenes (0.31% to 7.61%). Cis-thujone (23.5% to 29.1% concentration range of the total oil) and camphor (18.3% to 27.3% range of the total oil) were the major oil constituents (Table 1). Overall, increasing the DT up to 160 min resulted in decreased concentrations of cis-thujone and camphor in the oil.

All of the monoterpene hydrocarbons (α- pinene, camphene, β-pinene, myrcene, and limonene) were eluted early in the steam distillation process. Therefore, the highest concentrations of these constituents in the oil were at 5- to 10-min DT and the lowest at 160-min DT (Table 1; Fig. 1). The concentration of eucalyptol (1,8 cineole) (4.0% to 7.4% of the total oil) followed the same pattern as monoterpene hydrocarbons depending on the duration of the DT (Table 1; Fig. 1). In contrast, the concentration of bornyl acetate (1.1% to 1.5% concentration range in the oil) was lowest at 5- to 10-min DT and increased with increase in DT.

The yields of the oil constituents were calculated from the oil yield and the concentration of each constituent in the oil at any given DT (Table 2). Generally, the yields of the monoterpene hydrocarbons constituents (α-pinene, camphene, β-pinene, myrcene, and limonene) were higher at 5-min DT relative to the 2.5-min DT; increasing DT to 80 min did not significantly increase yields relative to the respective yields at 5-min DT (Table 2).

The effect of DT was significant on yield and on concentration of oil constituents responses with the exception of transthujone and borneol (which gave an overall mean of 9.22% and 1.52%, respectively), hence confirming the hypothesis of the study.

The essential oil of dried garden sage biomass can be extracted for a relatively short period of time; maximum essential oil yield was achieved at 10- to 20-min steam DT. Further increase of the duration of the DT up to 160 min did not significantly increase oil yields.

DT can be applied as a practical method to obtain garden sage oil with a desirable chemical profile. Regression models were developed in this study, which can be used to predict garden sage oil yield and composition at specific DTs. These regression models may also be useful when comparing literature reports in which different durations of DT were used.

Plot of distillation time (DT) vs. essential oil (EO) content (starting at DT = 1.25 min) and the concentration of five constituents (starting at DT = 5 min) along with the fitted Asymptotic (for EO) and Power (for the others) nonlinear regression models. Equations of the fitted models are shown within each plot.

Plot of distillation time vs. the concentration of four constituents along with the fitted Asymptotic nonlinear regression models. Equations of the fitted models are shown within each plot.

Plot of distillation time vs. yields (mg) of six constituents along with the fitted Asymptotic (for bornyl acetate, β-caryophyllene, α-humulene, and humulene epoxide II), Power (for manool), and Concave (for veridifloral) nonlinear regression models. Equations of the fitted models are shown within each plot. 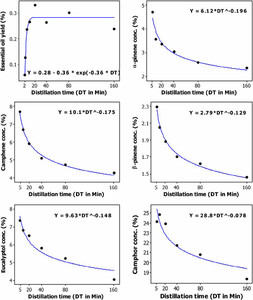 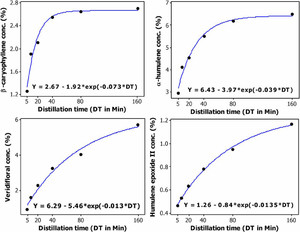 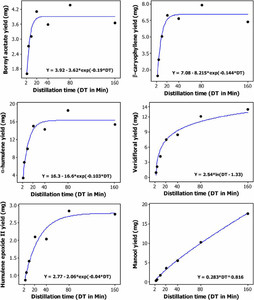