The history of chestnut use in Japan is very long. For example, a large number of chestnut pericarps and large chestnut timbers were found in a tower at the Sannai-Maruyama ruins (3500 to 2000 BCE) in Aomori Prefecture, northern Japan (Sawamura, 2006). For primitive Japanese people, chestnuts were important sources of food and construction materials. Even now, they are commercially grown throughout Japan for food, and chestnut orchards covered more than 21,400 ha in 2011, ranking fourth among woody fruit and nut crops in Japan after citrus, apple, and persimmon (FAOSTAT, 2013).

An organized chestnut breeding program started in 1947 at the National Institute of Fruit Tree Science in Japan and continues at the National Agriculture and Food Research Organization (NARO) Institute of Fruit Tree Science (NIFTS; Kotobuki et al., 1999; Pereira-Lorenzo et al., 2012). Currently, the most important target of the program is to release Japanese chestnut cultivars with an easily peeled pellicle. One such elite cultivar, Porotan, was released by NIFTS in 2006 (Pereira-Lorenzo et al., 2012; Saito et al., 2009). In addition, it is desirable to broaden the range of NHD to provide cultivars that are adapted to a much wider range of growing seasons. Simultaneously, large nut weight, the absence of PS, and freedom from II by the peach moth, Conogethes punctiferalis (Lepidoptera: Crambidae), are also important targets. The easily peeled pellicle trait in Japanese chestnut is controlled by a major gene at a single locus (Takada et al., 2012). Molecular markers associated with this trait are now being used in applied chestnut breeding programs (Nishio et al., 2013). On the other hand, the inheritance of NHD and NW has been insufficiently studied. Kotobuki et al. (1984) reported the narrow-sense heritability of NHD and NW using F1 progeny from the chestnut breeding program at NIFTS, but their experiment was not replicated over multiple years, and they did not estimate the environmental variance components. In addition, no reports are available for the inheritance of PS and II and the associated selection efficiency. However, breeders have recorded the performance data for those traits of cultivars/selections for many years in the NIFTS breeding program.

Environmental variance in an orchard comprises the variance among years and variance among trees within a genotype as well as the genotype × year interaction variance, the tree × year interaction variance, and the variance among nuts (fruits) within a tree, which can all be estimated by repeating measurements of replications of several genotypes in 2 or more years (Hansche and Beres, 1966; Hansche and Brooks, 1965; Sato et al., 2000; Yamada et al., 1993, 2002). Genetic and environmental variance has been estimated for many fruit crops such as sweet cherry (Hansche and Beres, 1966), Japanese persimmon (Yamada et al., 1993), strawberry (Sacks and Shaw, 1994; Shaw, 1991), peach (De Souza et al., 1998), grape (Sato et al., 2000), guava (Thaipong and Boonprakob, 2005), and Japanese pear (Nishio et al., 2011). Once accurate estimates of the components of environmental variance have been obtained under a given set of cultural conditions, the environmental variance under any given number of replications and measurement repetitions can be estimated for those conditions (Nyquist and Baker, 1991; Yamada et al., 1993, 2002).

Environmental variance and broad-sense heritability are important both for selection and for future genomics-based breeding. All genomics-based breeding techniques, including quantitative trait locus (QTL) analyses, genome-wide association studies (GWAS), and genomic selection (GS), need accurate phenotype evaluations to build an accurate phenotype database. Phenotypic variance contains both genetic and environmental variance components. The fluctuation of phenotypic values in response to changes in environmental conditions hinders the identification of useful molecular markers and can provide misleading results for marker effects detected by these analyses.

The objective of the present study was to accurately estimate the components of environmental variance and the broad-sense heritability of NHD, NW, PS, and II with the goal of supporting phenotypic selection in chestnut breeding programs, studies to detect linkages between molecular markers and traits of interest, and future genomics-based breeding.

This experiment was based on two trees each of four cultivars (‘Ishizuchi’, ‘Mikuri’, ‘Porotan’, and ‘Tsukuba’; Table 1). The trees were 12 years old in 2011, were grafted on the seedling roots of ‘Kunimi’, and were randomly planted at a spacing of 6.0 m × 7.2 m in an orchard at NIFTS in Tsukuba, Ibaraki, Japan (lat. 36°04′N, long. 140°10′E). The trees were pruned in winter to promote stable nut production and were grown using the standard cultural techniques used in commercial production orchards in Japan.

Up to three nuts are contained in a bur that develops on a shoot of Japanese chestnut. In 2011, all the burs from each tree of the four cultivars were harvested when the bur had changed from green to brown and dropped. After removal of the bur, NW of each nut was measured as the fresh weight. Log-transformed values of NW were used in the following statistical analysis.

To estimate the number of nuts required to evaluate NW, we analyzed the NW of 100 defect-free nuts randomly chosen from the total harvest from each tree by means of one-way analysis of variance (ANOVA). The phenotypic value of NW (P1ijk) for the kth nut of the jth tree of the ith genotype (cultivar/selection) was expressed using the following model:

where the subscript 1 refers to Expt. 1, and:

g1i = the random effect of the ith genotype,

t1ij = the random effect of the jth tree of the ith genotype, and

n1ijk = the random effect of the kth nut of the jth tree of the ith genotype.

Cochran’s test (Cochran, 1941) did not reject homogeneity of variance within a tree at P < 0.05. ANOVA provided the variance among genotypes (σg12), among trees within a genotype (σt12), and among the nuts within a tree (σn12). The distribution of the residual estimates was not significant at P = 0.05 by the one-sample Kolmogorov–Smirnov test (Campbell, 1974), and it approached a normal distribution. The ANOVA was performed in JMP Version 9.0.2 software (SAS Institute, 2012).

The performance of the cultivars/selections in terms of nut traits.z 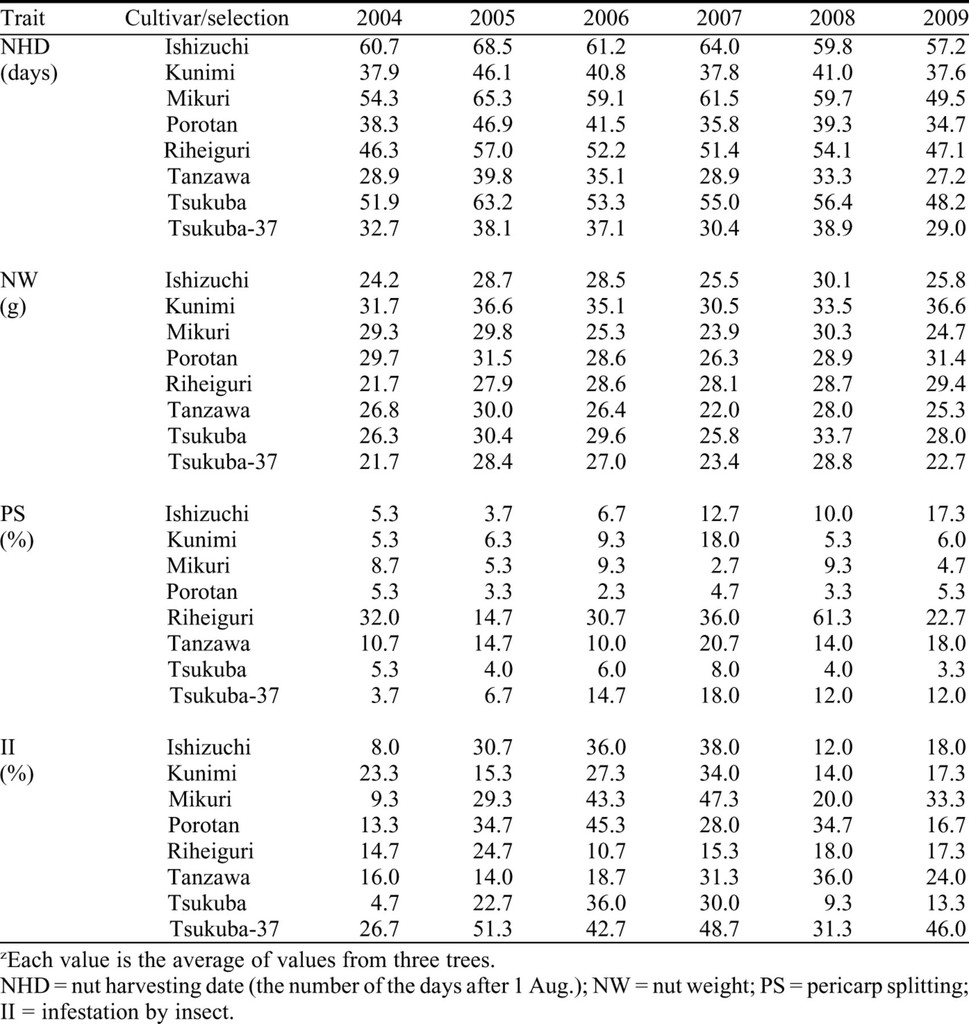 The burs and nuts were harvested as in Expt. 1. After removal of the bur, the number of nuts harvested on a given day was recorded. The number of harvested nuts per tree was at least 64 and the average was ≈300. The NHD of each nut was expressed as the number of days after 1 Aug. Fifty nuts were randomly chosen, and the average value of NHD was analyzed. PS was evaluated as the proportion of nuts with a split pericarp and II was evaluated as the proportion of the nuts infested by insects out of 50 randomly chosen nuts from each tree. Because nuts were harvested every 3 or 4 d, the number of intact nuts on a given harvesting day was recorded and the group weight was measured (in grams) on a digital scale on each date. We chose this approach because it is impractical to weigh each nut individually in practical breeding operations. The average individual NW was calculated as the total intact nut weight divided by the total number of intact nuts.

Data were analyzed using two-way ANOVA. The phenotypic value of the jth tree of the ith genotype in the kth year was expressed as follows:

where the subscript 2 refers to Expt. 2 and:

g2i = the random effect of the ith genotype,

t2ij = the random effect of the jth tree of the ith genotype,

y2k = the random effect of the kth year,

(gy2)ik = the interaction between the ith genotype and the kth year, and

r2ijk = the residual effect in the jth tree of the ith genotype in the kth year.

Before statistical analysis, the NW and PS values were log-transformed and the II values were square root-transformed to improve the normality of the distribution of the residual estimates. Because PS values of 0 could not be log-transformed, they were set to 0.01 (the minimum measured value for this trait). The distribution of the residuals was not significantly different from a normal distribution at P = 0.05 by the Kolmogorov–Smirnov one-sample test (Campbell, 1974) for all traits. Therefore, the ANOVA model was applicable to the data.

Analysis of variance for the nut weight records for 100 nuts from two-tree replicates of four chestnut cultivars (genotypes) in 2011 (Expt. 1).

Two-way ANOVA showed that the genotype and genotype × year interaction were significant for all traits (Table 4). The percentage of total variance accounted for by the genetic variance component (σg22) was larger for NHD (84.3%) than for NW (27.2%), PS (47.9%), and II (17.1%; Table 5). A large chestnut with no PS and no II is the preferred type in the Japanese market, and the eight cultivars/selections used in this experiment had a larger nut size and a smaller frequency of PS and II than the average of those in the Japanese chestnut germplasm collection at Tsukuba. Therefore, they should have a smaller genetic variance in NW, PS, and II than in the overall genetic resources for Japanese chestnut.

Estimates of the variance components in the analysis of variance for nut traits using eight cultivars/selections with three trees per genotype for 6 years. 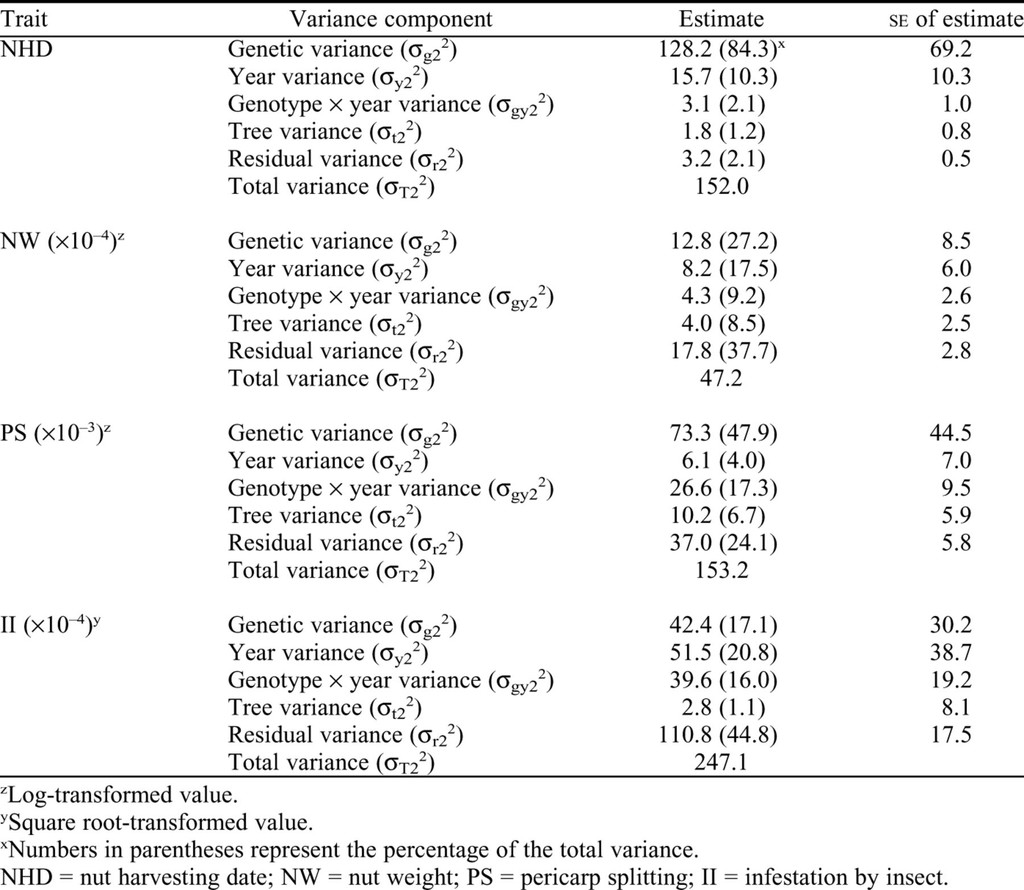 For NW, the number of nuts evaluated per tree was not constant. Strictly speaking, this means that the data were not highly appropriate for the ANOVA model, but weighing each nut requires more time and labor than would be available in practical breeding, which requires efficient measurements. The σr22 in NW was 17.8 × 10−4 and consisted of the effects of the tree × year interaction and within-tree variation among the nuts. In this study, the number of nuts evaluated per tree was at least 64 and was mostly more than 100; therefore, the variance resulting from within-tree variation among the nuts was estimated as less than 1.54 × 10−4 from the results in Expt. 1, indicating that most of σr2 was accounted for by the tree × year interaction variance and that the variance among nuts within a tree was minimal. Therefore, the bias for the ANOVA model was minimal, and the result can be used for practical chestnut breeding.

The estimated environmental variance is useful in both conventional breeding and genomics-based breeding based on methods such as QTL analyses, GWAS, and GS. Accurate phenotype evaluation is necessary to develop molecular markers or to predict the value of a given cultivar in breeding. The genetic variance depends on the plant population: the seedling population for QTL analyses, the set of cultivars for GWAS, and all of the seedling population for GS. It is difficult to evaluate the traits of chestnut seedling trees over several years because the trees grow swiftly and become too large to manage easily in a breeding orchard. Because chestnut seedlings were traditionally planted at a spacing of 2 m × 5 m in the NIFTS orchard, the evaluation of the seedlings for genetic analyses was limited to 2 years. If the phenotypic variance of seedlings can be obtained, we can estimate heritabilities using the environmental variance estimated in the present study and predict how accurately we can evaluate the performance of the trees for each of the four traits that we studied. We are currently preparing F1 populations, a phenotype database for the cultivars, and records of the seedling populations used in the NIFTS chestnut breeding program to support these genetic analyses. Accurate evaluation of the phenotype based on sufficient repetition to reduce the environmental variance will improve future genomics-based breeding.