‘Hall’ is a self-fertile bronze-colored muscadine grape (Vitis rotundifolia Michx.) that is being released by the University of Georgia (UGA) College of Agriculture and Environmental Sciences. ‘Hall’ produces good yields of medium- to large-sized berries with excellent taste suitable for the fresh market. ‘Hall’ berries have exceptionally low levels of pedicel scar splits and tears, leading to a high percentage of usable berries. ‘Hall’ has an early harvest date with an average first pick of 31 July in Tifton, GA. Berry color of ‘Hall’ is noticeably brighter and more yellow than most bronze cultivars. ‘Hall’ is recommended as a self-fertile bronze muscadine for early fresh-market sales.

‘Hall’ originated in Tifton, GA, from a cross of ‘Fry’ by ‘Tara’ (Fig. 1) made in 2001 by Melvin Hall at the UGA–Tifton Campus. Selection of ‘Hall’ and all subsequent testing was performed by Patrick Conner. ‘Fry’ is a midseason female bronze cultivar with excellent flavor (Conner, 2009). ‘Tara’ has perfect flowers, making it self-fertile, and produces bronze berries with dry pedicel scars that ripen early in the muscadine harvest season (Conner, 2009; Lane, 1993). The original ‘Hall’ vine first fruited in 2004. Because of its light berry color, early harvest date, productivity, and dry stem scar, it was propagated for further trials as Ga. 1-1-48.

Vine vigor was calculated by measuring the caliper of the trunk 75 cm above the ground before budbreak. Vine yields were estimated in Years 3 and 4 by harvesting fruit from 1 m of the interior cordon (cordon most distal to the trellis post) and then multiplying the sample yield by the total cordon length. Vines were harvested from one to four times depending on the uniformity of ripening with the first harvest occurring as soon as approximately half of the berries were ripe. Once the yield was weighed to give the total yield weight, the berries were then sorted. Berries with any visible signs of decay were removed and weighed to calculate percent berry rot. Of the undecayed berries, berries were sorted into those that had pedicel scar splits (large cracks in which the interior flesh was visible), pedicel scar tears (peeling back of the berry epidermis), and dry pedicel scars. Percentage of each of these categories was calculated by dividing the weight of each category by the total weight of all three categories and then multiplying by 100. Rotted berries and berries with pedicel scar split are commonly removed before packing fruit, so percent usable yield was calculated by the equation 100 × (1 – % berry rot/100) × (1 – % pedicel scar split/100). Ten berries were then randomly selected from the usable yield sample and measured for berry weight and diameter. All 10 berries were then crushed together to provide juice to determine percent soluble solids.

Berry skin color was measured on first harvest berries at the equator of the berry using a Konica Minolta CR-400 (8-mm aperture, D65 illuminant) handheld colorimeter (Konica Minolta, Ramsey, NJ). The colorimeter was calibrated with a white standard calibration plate, and color was measured as L*, a*, b* coordinates. A single measurement was recorded for each berry and 25 replicate berries were measured for each cultivar. The value of L* describes the degree of darkness or lightness with L = 0 being black and L = 100 white. Before analysis, a* and b* coordinates were transformed into chroma (C*) and hue angle (h°) using the equations: C* = (a*2 + B*2)1/2 and h° = tan−1(b*/a*) (McGuire, 1992). Richness of color is represented by C* and h° represents the dominant color wavelength where 0° = red–purple, 90° = yellow, 180° = bluish green, 270° = blue.

Vines of ‘Hall’ are self-fertile and have moderate vigor as measured by vine caliper (Table 1). Leaves average 10.5 cm in length and 8.5 cm in width. Lateral canes are drooping and usually grow 1.5 m or more in a season at Tifton, GA. Typical cane diameter is 3 to 10 mm and internode length ranges from 3 to 5 cm (data not shown). Total yields from ‘Hall’ at Tifton were lower than ‘Triumph’ and equal to the other control cultivars in Year 3 and equal to ‘Triumph’ and higher than ‘Fry’ and ‘Lane’ in Year 4 (Table 2). In the Wray, GA, trial, ‘Hall’ had similar yields to ‘Tara’ in Years 3 and 4 (Table 3). ‘Hall’ had excellent low levels of pedicel scar split and pedicel scar tear at both locations each year. Berry rot was high in Year 3 at Tifton and Year 4 in Wray but was equal or superior to ‘Fry’ and ‘Tara’ (Tables 2 and 3). Percent usable yield and total usable yield was as good or better than all control cultivars except ‘Triumph’ in Year 3 at Tifton (Tables 2 and 3).

Vine caliper of ‘Hall’ and standard muscadine cultivars after the first 3 years of growth at Tifton and Wray, GA.

Yield (kg/3-m vine) and berry quality attributes of ‘Hall’ and standard muscadine cultivars at Tifton, GA, in the third and fourth years of growth (2012–13). 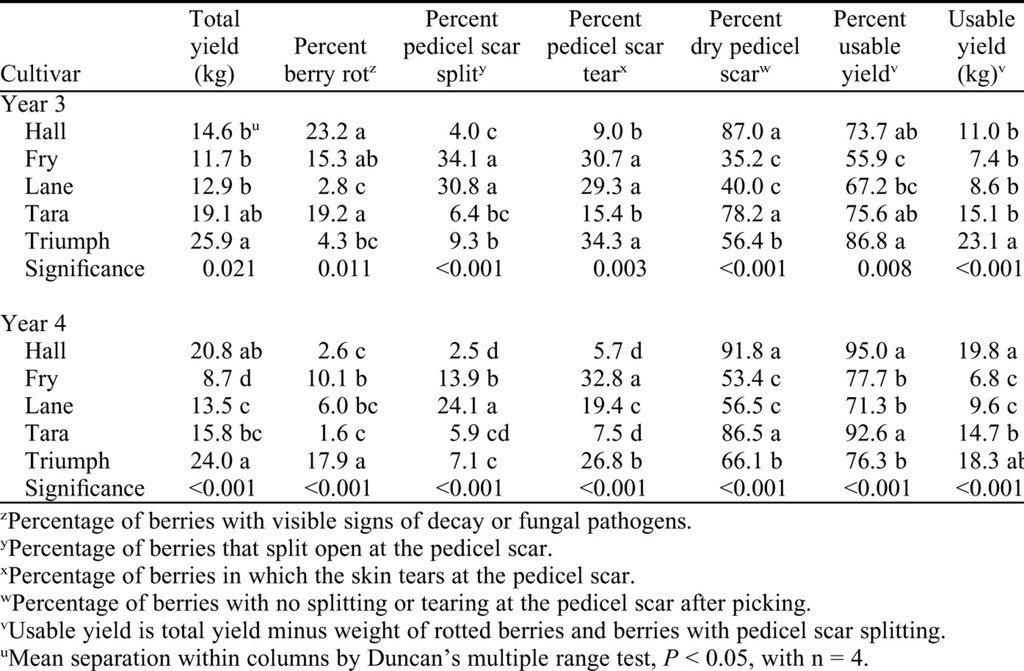 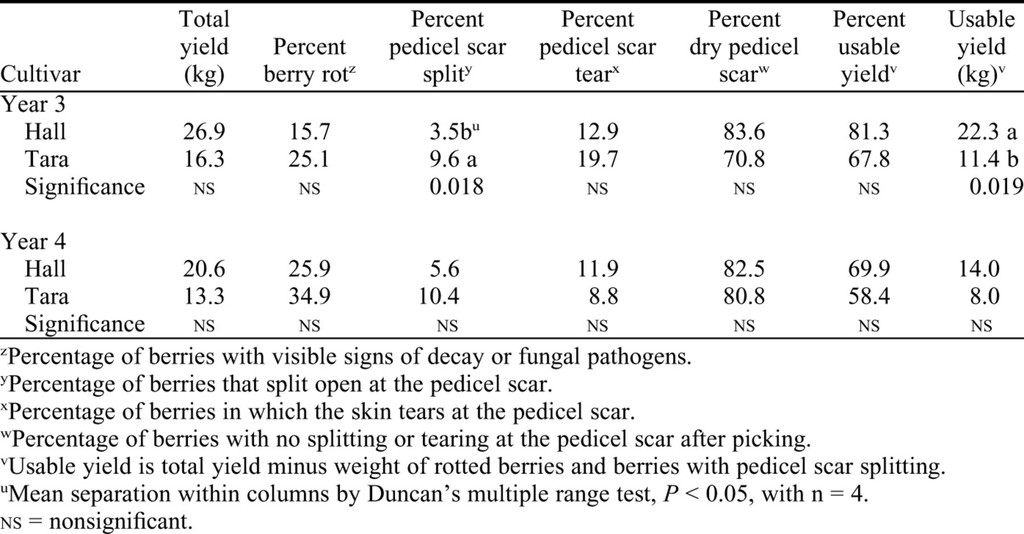 Average first harvest of ‘Hall’ was 31 July (Table 4), which was similar to the early control cultivars (Lane, Tara, and Triumph), and 17 d before the first harvest of the main season control cultivar Fry. Average percent of the total yield of the first harvest was 59.3%, and percent soluble solids of the first harvest was 14.6%, which was similar to the other early cultivars tested. At maturity, the berries of ‘Hall’ are round and average 10.6 g in weight and 26.2 mm in diameter (Table 5). Berry size is similar to the other self-fertile cultivars but smaller than the female cultivar Fry. Skin of ‘Hall’ is more friable than ‘Fry’ and ‘Triumph’ but not as much as ‘Lane’ as measured by berry penetration work (Conner, 2013). Flesh firmness is more firm than ‘Fry’ but less than ‘Lane’ (Conner, 2013). The color of ‘Hall’ berries is a bright yellowish green (Fig. 2). ‘Hall’ is lighter color than ‘Fry’, ‘Tara’, and ‘Triumph’ and more yellow in color than ‘Tara’ (Table 6).

Flower and fruit attributes of ‘Hall’ and standard muscadine cultivars at Tifton, GA, in years 2011–13.

‘Hall’ is recommended as an early-season bronze muscadine for the fresh market. In general, ‘Hall’ is similar to its parent ‘Tara’ but has higher soluble solids content (Table 5), a lighter and more yellow berry color (Table 6), and, unlike ‘Tara’ (Conner, 2009), has not produced any off-flavors. The cold-hardiness of ‘Hall’ has not been determined, but young vines have done well in Watkinsville, GA. ‘Hall’ is easily propagated by softwood cuttings rooted under mist during June and July.

Ripe berries of ‘Triumph’, ‘Hall’, and ‘Tara’ in pint clamshells. 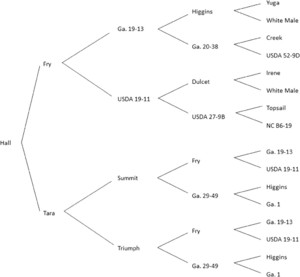